You may be weighing Haswell-e vs Skylake if you are looking to build your system or upgrade your existing setup. There are plenty of discussions about which one is truly better, but there is also too much noise and old information. 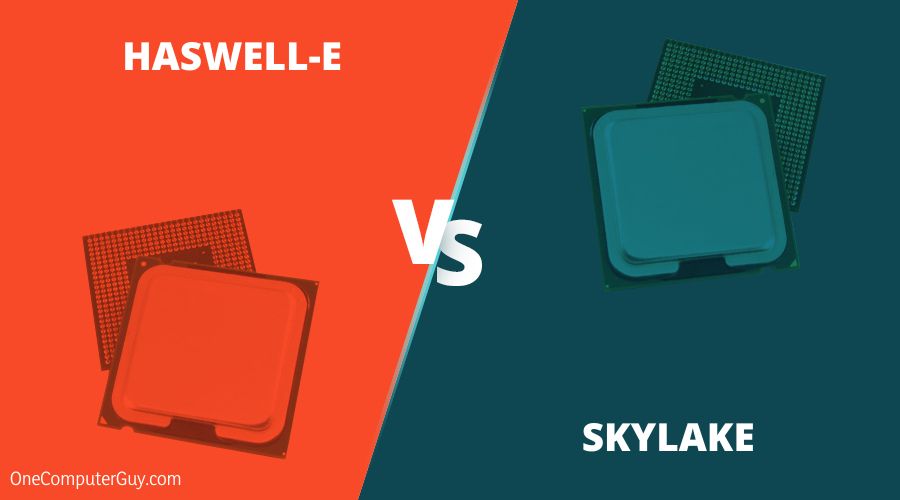 Our experts break down whether you should get Skylake vs Haswell for gaming, work, and just surfing the web in this article. We have found the facts that you need to know and inserted our opinions where necessary.

Keep reading to see more about the differences between Haswell and Skylake, and determine which one will be better for you.

Haswell-E is the fourth generation of Intel, and it continues to be one of the most popular. It is equally known, but its number and codename.

In terms of Broadwell performance, this CPU certainly had some growing pains, but it became one of the most beloved CPUs of its time. It was the first update in a long time with some adjustments made, but the results would define the way Intel built processors.

Haswell-E was a great product that improved on many things, including speed and stability. It used a low-frequency quad-core that was new and innovative at the time, making video commands particularly strong. There was very little hyperthreading here.

One of the biggest problems with Haswell-E was that the refresh rate wasn’t great. It presented problems specifically for gamers but didn’t show up for those who wanted to surf the web or used the CPU for work. As generations continued within the Haswell-E build, this was a feature that got better. Many users considered this to be an expensive build as well that prevented some people from using it.

Intel Skylake came out a long time after Haswell in August of 2015. It took after the Broadwell release, which fell between Skylake and Haswell-E, but itself didn’t make any impressions. Skylake has been so popular because it significantly improved on the previous generation but didn’t seem to push the tech elements as much as Haswell-E did. It was successful at reducing power consumption and fixing the refresh rate issue that plagues Haswell.

This CPU improved laptops and tablets’ battery life, which previously struggled under Broadwell and even Haswell-E. The CPU also had a reputation for running cool and preventing heat, so it was popular among heavy users and even gamers.

Intel Israel was behind this build. Hence, they worked extremely hard to move into the future with sleeker designs and slimmer builds. For the time, this was on some of the smallest laptops that were still powerful. Another new feature is that this CPU can be easily overclocked.

Predictability was a problem with Skylake. Many people weren’t sure how their builds would perform with it, which caused somewhat of mass migration after this build. People have since come back, but it caused some pretty significant issues for Intel.

The main difference between Haswell-e and Skylake is, Skylake coming two generations later, it is apparent that it is a better option for most people with better speed, easy of access and less bugs compared to Haswell-e.

Naturally, one can assume that comparing Haswell-E and Skylake is a bit of a fool’s errand since their generations are so different. It is more popular and easier to find today. Even so, there are some interesting comparisons to make.

All Intel CPUs will have some problems, especially at the start of their lifespans. It just happens that Haswell-E was reasonably good when it was released, and there weren’t a lot of bugs to talk about. However, in today’s world, there would be many more issues.

The 6th generation Intel Skylake wasn’t actually all that popular and was short-lived in its time. Haswell-E was the more popular option and led the way for the resulting iterations.

Both of these CPUs have been retired by Intel and replaced with newer models. Still, it is much easier to find the Skylake for resale or brand new with some leftover stock. With some research, you can find both.

Simply because it was a later design, the Skylake CPU will be faster than the Haswell-E when you compare them. Even so, by today’s comparisons, neither of these CPUs are all that fast.

While Intel works to keep everyone safe, of course, there are going to be security issues. Both have them, and it is relatively easy to exploit them. Skylake had some pretty serious security concerns at the time.

Picking a CPU can be difficult, and if you are trying to weigh whether the Haswell-E or Skylake architecture is best for you, you might just be looking in the wrong places. There are plenty of newer, modernized architectures.

However, for those looking to build using one of these specifically, there are some things to consider. Remember that it may be easier to find these CPUs on the retail market by themselves if you are building a new laptop or desktop. It isn’t as easy to see them in already built machines.

This is an actual figure because you can find anything from a dual-core CPU to an eight-core CPU. Both of these start with dual-core and have some souped-up CPUs that are more. Most software released after these were manufactured will require more cores than either architecture offers.

The cache size will help to determine the speed of memory. The cache dictates how much memory gets used for temporary storage, and therefore, you can retrieve it more easily. The larger the cache, the better, but it isn’t necessarily a “make or break” number.

All products have a few flaws or just things that most people don’t like, that the nature of the game. However, when there is a known bug for a CPU, it is essential to look at how the company responds to it. If they are quick and make amends, that is always best. Intel is reasonably good at doing that.

Of course, speed is going to matter for many people, particularly gamers. The faster a CPU is, the better it is. Speed helps with stress and performance in gaming, music production, streaming, and graphic design. Most people won’t notice a slight difference in rates, but some will, especially those used to faster CPUs.

If you are going to build your rig, it is essential to pay attention to what is compatible with the CPU. For instance, the chipset is a significant thing to pay attention to. Most Intel CPUs have a ton of compatibility options, so you should be fine there.

CPUs are known for giving off a lot of heat, particularly these older models. If you game or do something that pushes your computer, you need to think about heat. If you are going to overclock, you may want to get something a bit more modern. While not having good heat control doesn’t disqualify a processor for some people, it can be tough to find a good CPU for gaming that doesn’t also offer heat management.

Haswell E or Skylake – Which Comes Out On Top?

In today’s world, neither Haswell-E nor Skylake are good enough for most people. Just for fun, the two options aren’t even in competition with each other. Skylake, though decidedly less popular and not used for quite as long, is the better of the two options.

Suppose you are going to buy a product that uses Skylake. In that case, your best bet is to get something from Generation C, as that is still the “best” option from this architecture.