Cores vs threads are among those comparative queries to which the world of the internet lacks a clear-cut answer. No worries, we’re here with the resources you need. 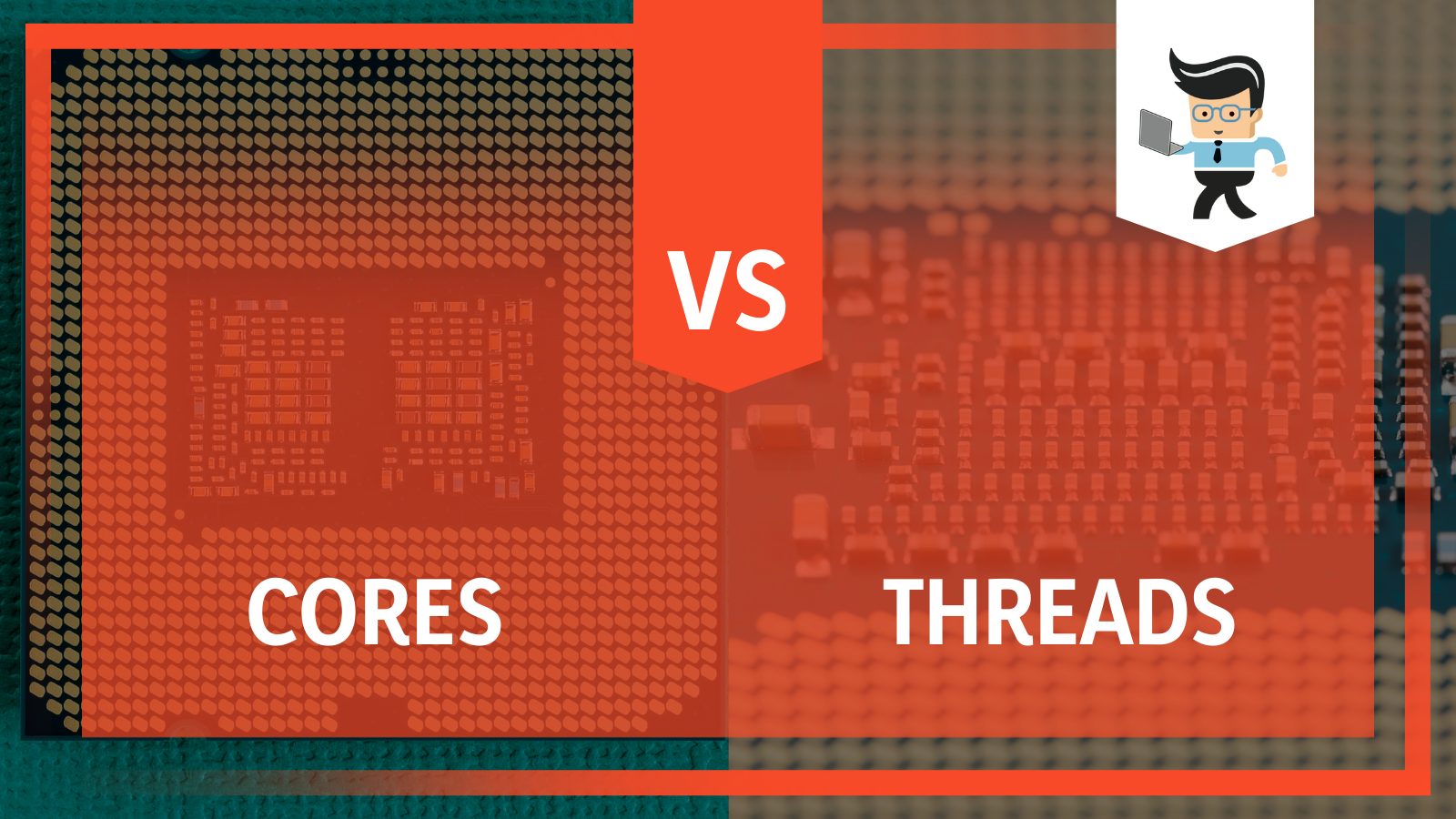 Read the following article and know how cores and threads present themselves and work differently.

What Is The Difference Between Cores and Threads?

The main difference between cores and threads is that, while the former is a physical component that requires single process units, the latter is a virtual component and demands multiple processing units. Cores enhance productivity during workload; on the flip end, a thread improves the GUI response.

What Are The Cores Best For?

The CPU (or Central Processing Unit) enables our computers to perform various tasks via applications and offers instructions that transmit information stored to Random Access Memory (RAM). CPU cores (popularly called cores) are the pathways composed of zillions of microscopic computer chips within a processor that assists in the CPU’s operation.

If you’re interested in multi-tasking, your system should have at least two cores, so the processor is capable of fulfilling the tasks properly.

Having multiple cores installed on your PC allows the system to be capable of seamlessly running various processes at the same time. So if you’re someone who intends to employ the computer to perform vivid tasks simultaneously, focusing on having more cores will make sure that the job is done with greater ease.

Cores, in fact, multi cores are meant to deliver the best performance. It won’t be hard to understand the fact that the availability of a multi core processor will make your system more capable of dealing with tasks as compared to single-core setups. Inside the chip, the cores are usually located at a distance from where the high-end clock speeds can be flexibly achieved. Thus making the setup more powerful than usual.

Not just performance, cores are meant to offer reliable tasking as well. Having a multi core setup will ensure that the faulty in one’s operation doesn’t impact the overall performance.

As already mentioned a couple of times, the ability of your system to deal with multi-tasking is majorly dependent on the number of cores your system chip has. The more, the better; the calculation is as simple as that.

It might come as a surprise to many, but multi-tasking with a handy number of cores actually drives less power compared to the other situation. The same goes for battery life as well. However, keep in mind that there are several other factors that do play a collective role in the power consumption scenario.

What Are The Threads Best For?

A thread (aka lightweight process), on the other hand, is a flow of execution that has its own program counter, a set, and a stack of registers that dwell in a process. A thread can share various information such as data segments, open files, and code components with its peer threads. 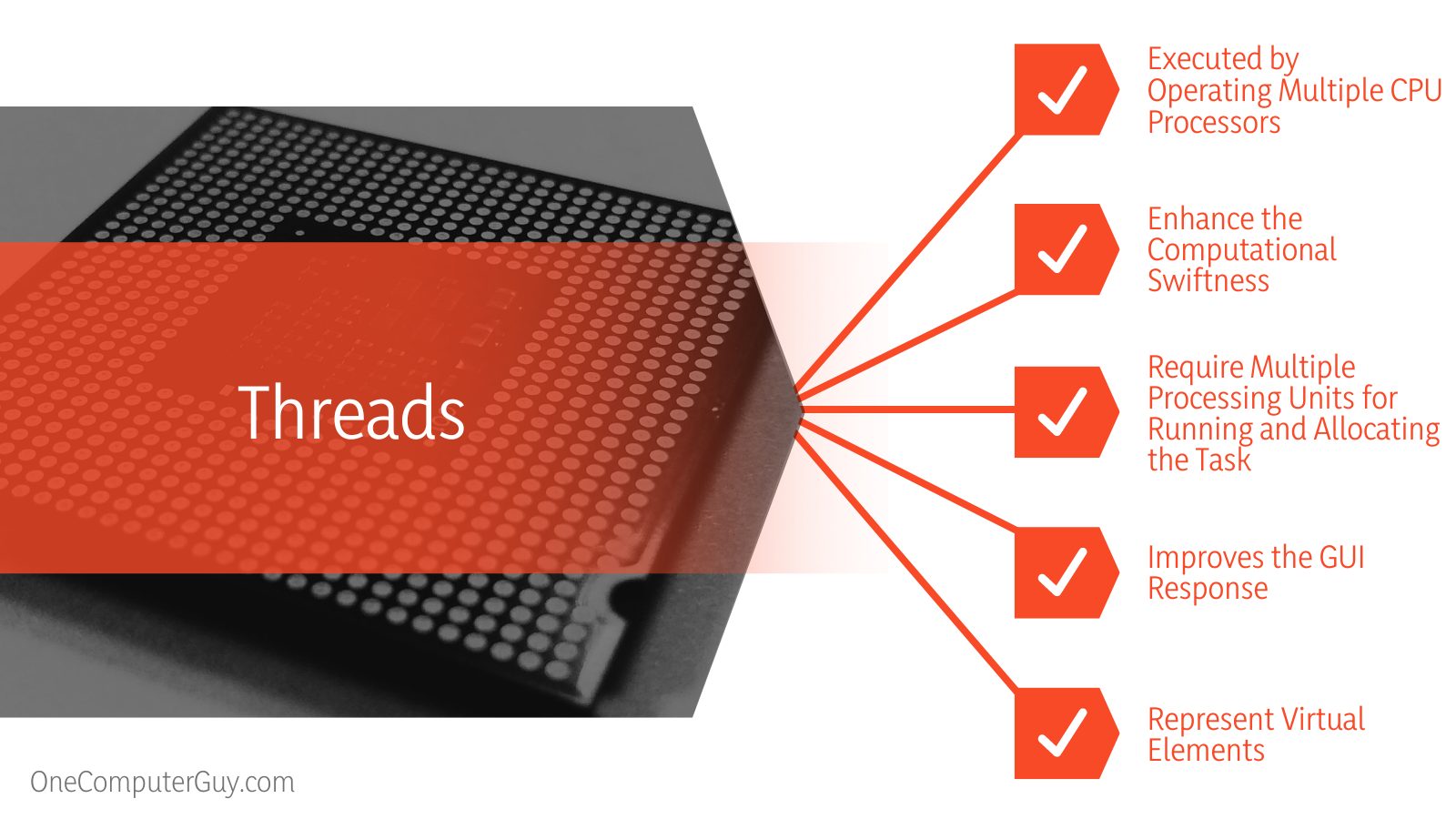 Simultaneously, CPU threads offer a way to enhance the performance of any running application using parallelism. Each thread denotes a separate flow of control.

CPU threads are the best choice to focus on when, instead of running multiple processes, you want your computer to handle as many tasks as one process demands with no issues whatsoever. Although not as good as cores, threads do help multitask, at least to a certain extent.

Threads or a multithreaded processor have a significant role to play when the concern is responsiveness. When you tend to section a process and distribute it over multiple threads, you can expect the execution to be quick, and its output to return immediately.

The same enhances the processing power as well. With more threads operating in a structured manner, more number of tasks will be completed per unit of time. This eventually aids in boosting the throughput of the concerned system.

Multithreading CPUs are great for context switching. The time is considerably low and doesn’t demand more overhead from the CPU.

If you’re after seamless resource sharing, CPU multithreading will genuinely help. When we talk about resources, we’re speaking of code, data, and the associated files. The ones which can be shared among all threads residing within a specific process.

– Cores Vs Threads: Understanding the Difference

A CPU core is a computer system’s hardware component and has the ability to perform one task at a time. The availability of multiple cores (or more) can allow numerous applications to be performed without interruption.

For instance, if anyone plans to play a high-end game or sit for hefty editing alongside browsing social media, some CPU cores get engaged in running the game, while some stick around and monitor other background applications such as Facebook, Skype, Chrome, and more.

However, to execute these functions effectively and quickly fetch necessary information from the application, the system needs to support CPU multithreading. An ongoing process creates threads. Whenever you tend to launch an application, the same creates a thread for itself eventually becoming the utility that handles all the tasks.

The same makes the whole process fast and organized, converting into better performance. Although CPU threads can work their way and increase power consumption, they rarely cause any temperature rise.

Cores are presenting a single processing unit with its own arithmetic logic unit (or ALU), control unit, cache memory, and registers. It can independently execute various instructions in a computational task. The execution involves a three-stage cycle of collecting, decoding, and performing, popularly called the instruction cycle. 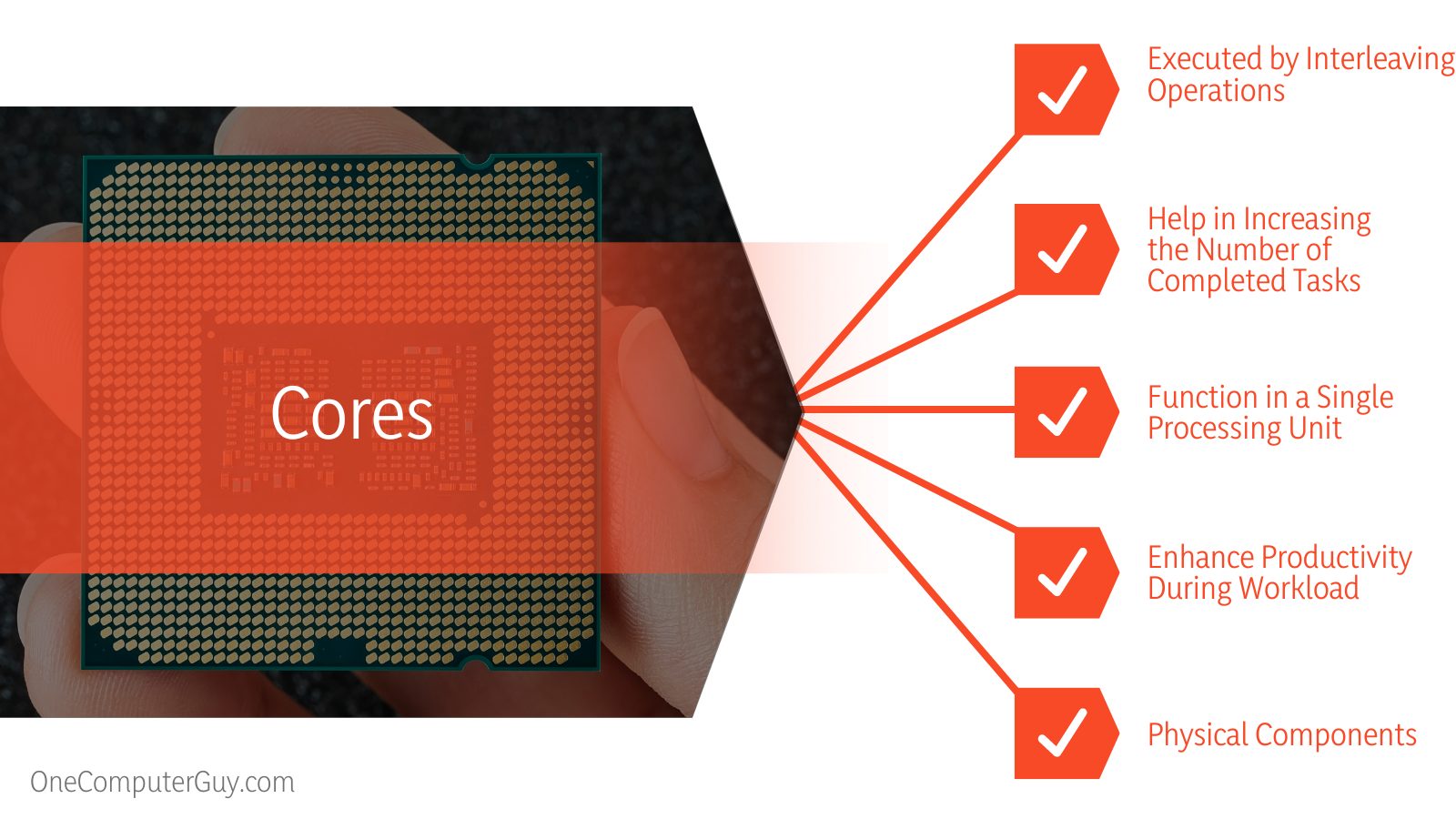 Threads are presenting a single code or chain of instructions that can be performed independently of and in parallel with said, other code snippets. CPU threads have their own set of registers, program counter, and stack. When it comes to threads in terms of processor cores, it usually means how a CPUs Simultaneous Multi-Threading (or SMT) feature handles CPU threads.

Yes, 4 cores will, of course, works better compared to 4 threads, especially when the concern is multitasking. The availability of more threads on your system will let it focus and process more independent things. However, with more cores on your system, it can run a series of intensive tasks concurrently and effectively.

– Are Threads as Good as Cores?

Cores and threads operate together to enhance a system’s productivity, and a balanced combination is what everyone should prefer. By default, a multi-core processor supports more workload than a single-core processor.

The CPU cores present on an integrated circuit are positioned at a place where higher frequencies are achieved. On the contrary, a multi-threading CPU allows a program to continue functioning even if one part of it gets blocked or is running a lengthy operation, causing an increase in responsiveness to the user.

No, coming to 2 cores and 4 threads, unfortunately, the build is not the ideal CPU for gaming. You might be able to run old-day titles, but the recent additions require a more powerful build. Gaming has always been on the list of tasks that take the most out of your computer’s productivity. Being on the heavier end, it is pretty obvious to understand why games demand a powerful machine with a strong configuration.

As uncovered in this cores vs threads review, both the CPU segments are often confused by many as similar entities; however, these are widely apart. The main difference is that cores are physical components while threads represent virtual elements.

CPU cores are defined as the task administrators to the Central Processing Unit that assists in running all sorts of activities. In comparison, threads are created by a running process that offers the CPU cores an ability boost to carry out their task in a functional way. Interestingly, cores and threads operate together to enhance the productivity of a system.