What types of CPU should you buy?

There are a few different options out there and when you buy a central processing unit, it can be hard to know just what you really need in terms of speed, core, costs, brands, and more. It is complicated and it isn’t something we talk about all that often. 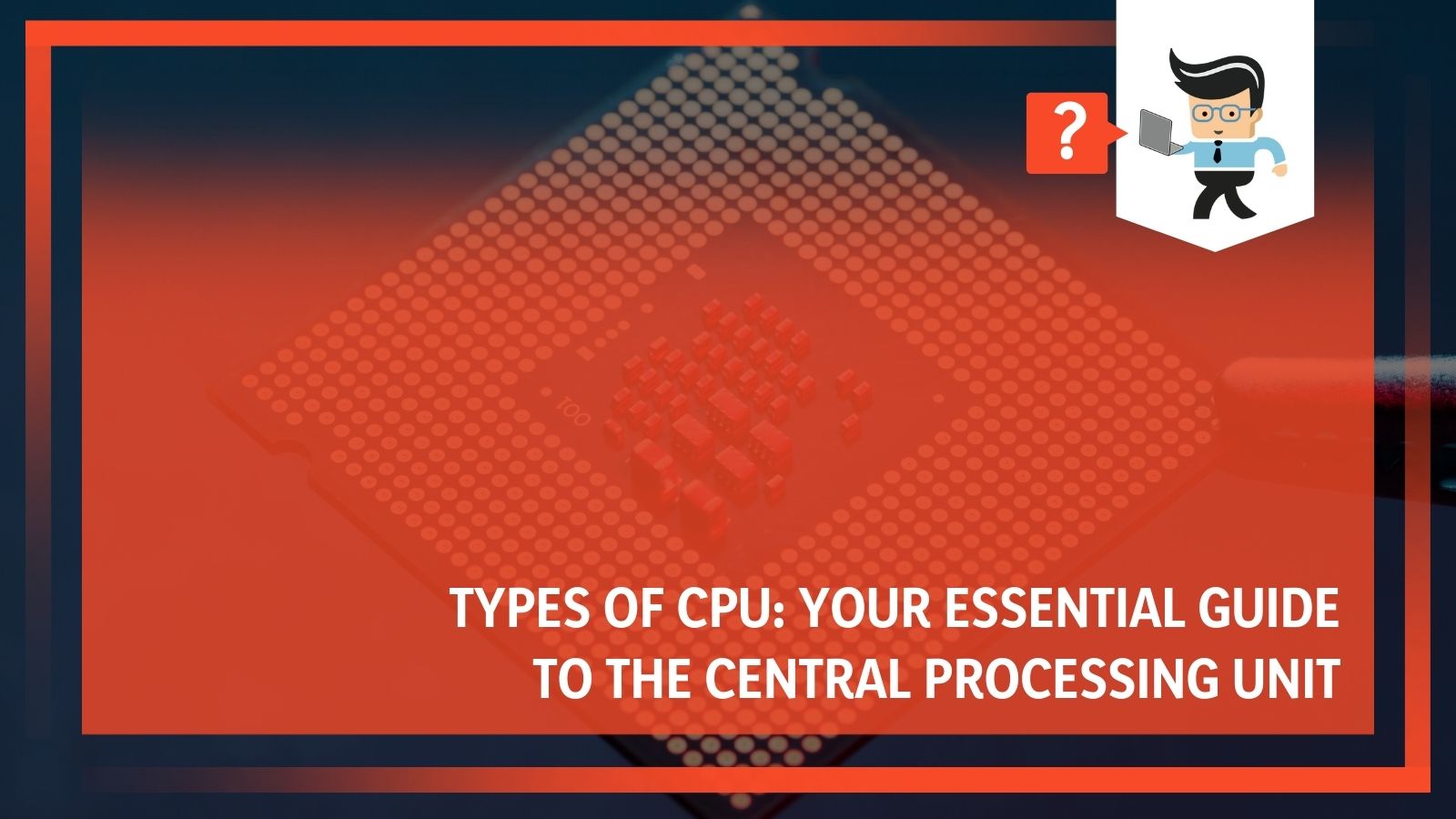 Still, a CPU is known as the “brain of the computer,” which means that it is actually one of the most important things. A good CPU helps with multitasking, performance, and speed above all else, but it helps overall efficiency in a million little ways.

In this guide, our experts will break down the different central processing unit types and help you understand where you should look, what you should look for, and how you can use each one. Keep reading for more.

What Is a CPU?

CPU is the shortened and more commonly used form of central processing unit or processor. The “unit” is composed of two parts: the central processor and the electronic circuitry that is located within the tower of your computer.

The CPU is a multitasking device that feeds the computer information, performs logic and arithmetic for programs, and inputs and outputs operations. It is one of the core elements of the computer but up until recently, there hasn’t been much discussion on them amongst the general public.

CPUs now have microprocessors that use integrated circuits that have a unit metal-oxide-semiconductor. This chip has the CPU as well as memory chips, microcontrollers, interfaces, and other systems. This chip takes up a single socket as a “CPU core.”

Your CPU is one of the most important elements of your computer, managing almost all of the commands and calculations that make it work properly. It controls components, peripherals, and important processes no matter what you do.

A CPU needs to rapidly input and output information. The different components all need to be powerful enough to work together: everything will perform to the capabilities of the slowest, weakest part.

It is important to know that there are two leading manufacturers of CPU processors: AMD and Intel. There are other manufacturers, but these are the most prolific. 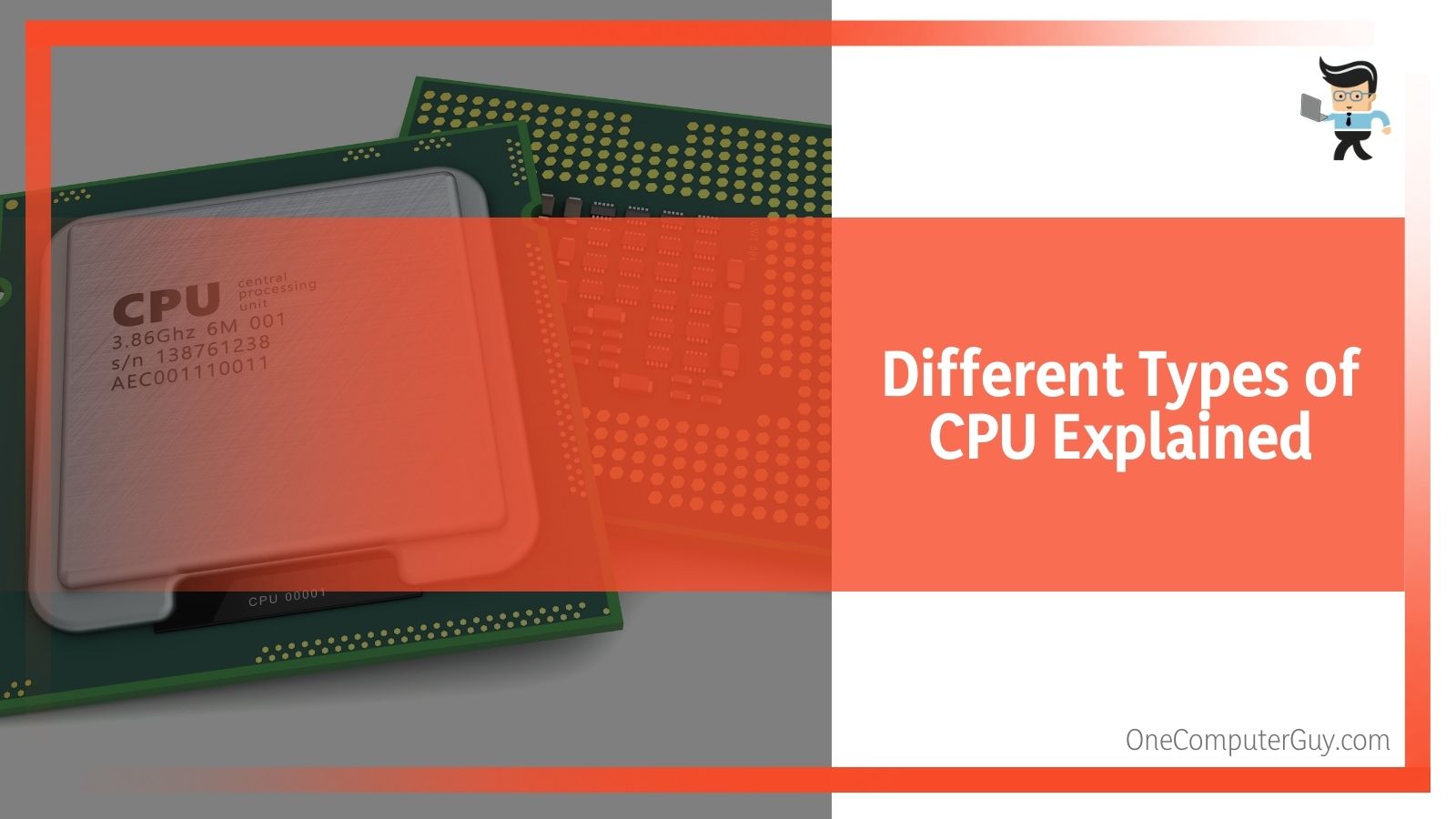 The original type of CPU was a single-core CPU. It is available widely and used in most standard personal computers and business computers.

These CPUs can only execute one command at a time, making them poor options for multitasking. If you are trying to do more than one thing at a time, it is possible, but you will notice a degradation in performance.

If one operation starts, the next process will have to wait in a virtual queue of sorts until the first one finishes. The computer doesn’t like when these queues form and it could start to freeze and take a long time to perform operations that normally take just a few seconds.

If possible, we don’t recommend this type of CPU at all unless someone just needs a computer for bare-bones activities like word processing or social media browsing.

A dual core CPU consists of two cores that act like one CPU. This means that the CPU can multitask more effectively and allows two things to happen at once, or more. Once again, you can overload a dual-core CPU, but it is harder to do.

To most effectively use a dual-core CPU, both the programs and the operating system need to have a unique code in them called a “simultaneous multi-threading technology” code. This is something found standard in most operating systems and programs today, but there are a few exceptions.

Most computers today will have at least a dual-core CPU, even the ones you buy without customization. Even this number of cores is becoming outdated and limits future-proofing capabilities in your build.

A quad-core CPU has four cores on a single CPU processor. It is a refined model that is used in the best computer builds today, especially in some of the best all-in-one computers and boxed computers.

The CPU evenly divides the workload between the cores, making it the best option for multitasking. It doesn’t signify single operations, making it faster, lighter, and more efficient than the other cores.

Just like with the dual-core CPU, quad-core CPUs use the SMT code to speed up the processes and make them seem instantaneous in many cases. 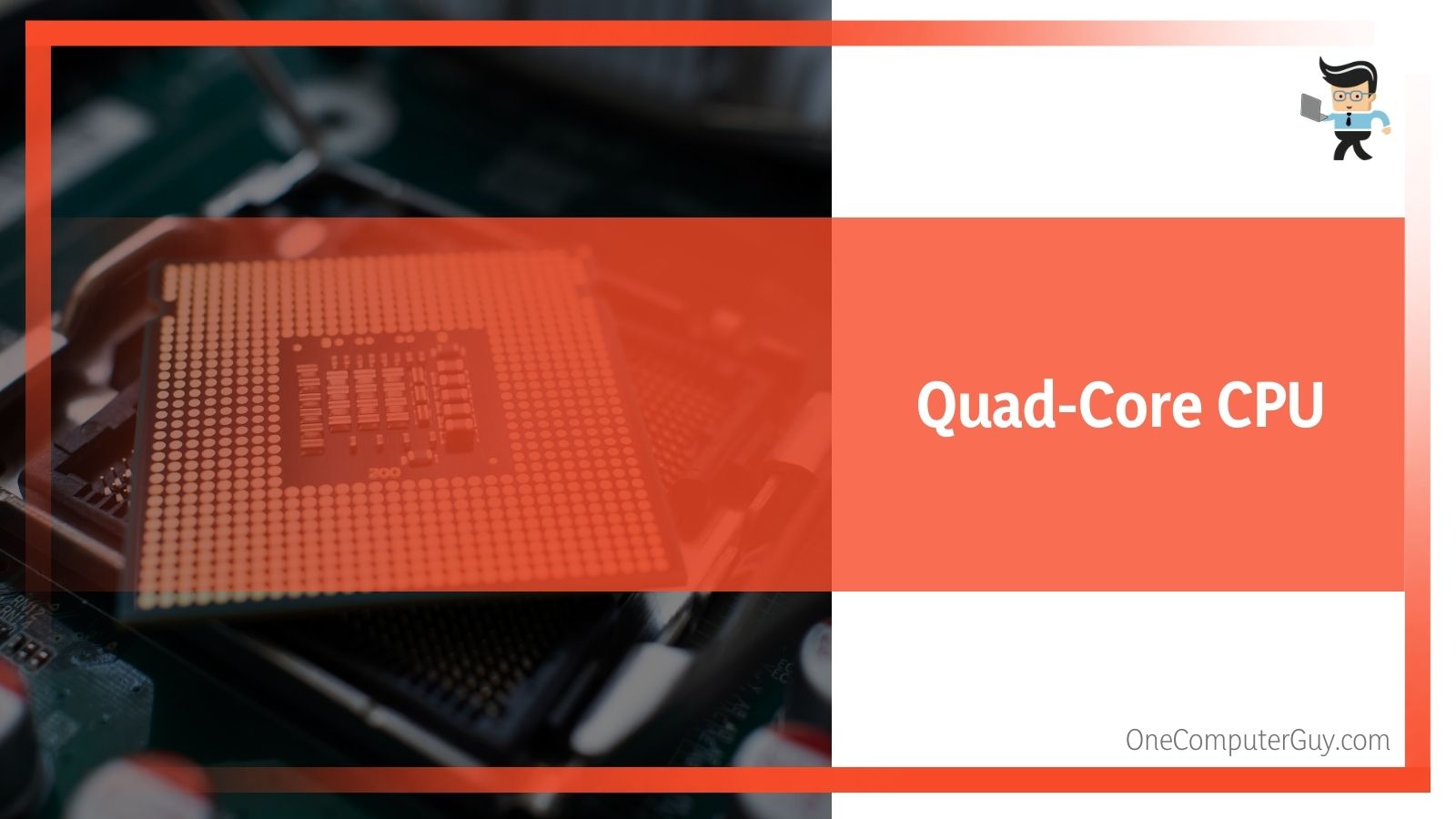 For some people, a quad-core CPU will be overkill. However, gamers, programmers, and anyone who heavily uses the computer while streaming, playing music, editing, or using bulky programs would benefit from this CPU size.

Even bigger and faster than a quad-core CPU is the Hexa-core processor. This comes with six cores and can execute tasks faster than other models. This processor is limited and harder to find on personal computers than one would expect.

Hexa-core processors are most commonly used in smartphones and tablets. Most smartphones (including those from Android and Apple) will use a hexacore processor. These processors make it possible to play games, listen to music, text, and get notifications all at the same time.

Even rarer is the octa-core processor that has eight independent cores to go even faster. These processors are a bit more expensive and only necessary for people who need to work quickly for their jobs. Gamers can use an octa-core processor, but only professional gamers who play for money will really get the advantages out of it.

There are core sets in this build that are typically tasked to do the repetitive, minimum powered activities that we do on a computer and then there are cores set aside for faster processing and action. With some software and builds, you can actually pick these programs, but that is a far more advanced level of computer building.

A deca-core processor can come as a double core processor, four cores with quad cores, six cores, and more. Deca-core uses ten independent cores as well, though those are the most expensive and hardest to find options. These systems function just like the octa-core processors do, with some cores dedicated to mundane tasks while others perform the more advanced tasks.

Newer smartphones and tablets are being manufactured with deca-core processors and modern manufacturing has made them lower in cost than other cores. For the foreseeable future at least, deca-cores are going to be future-proofed.

Most new market items will have the deca-core processor as well, even budget or low-priced computers because of how much easier and cheaper the manufacturing process is.

When we talk about computer processors types, we talk about AMD and Intel for the most part. These manufacturers are both great, though they tend to be used in different situations. While they can be, and are, used in other builds, they tend to work best in these categories.

AMD CPUs are most often used in servers and workstation computers for bigger corporations. They can be used in gaming computers as well, but that isn’t as common. 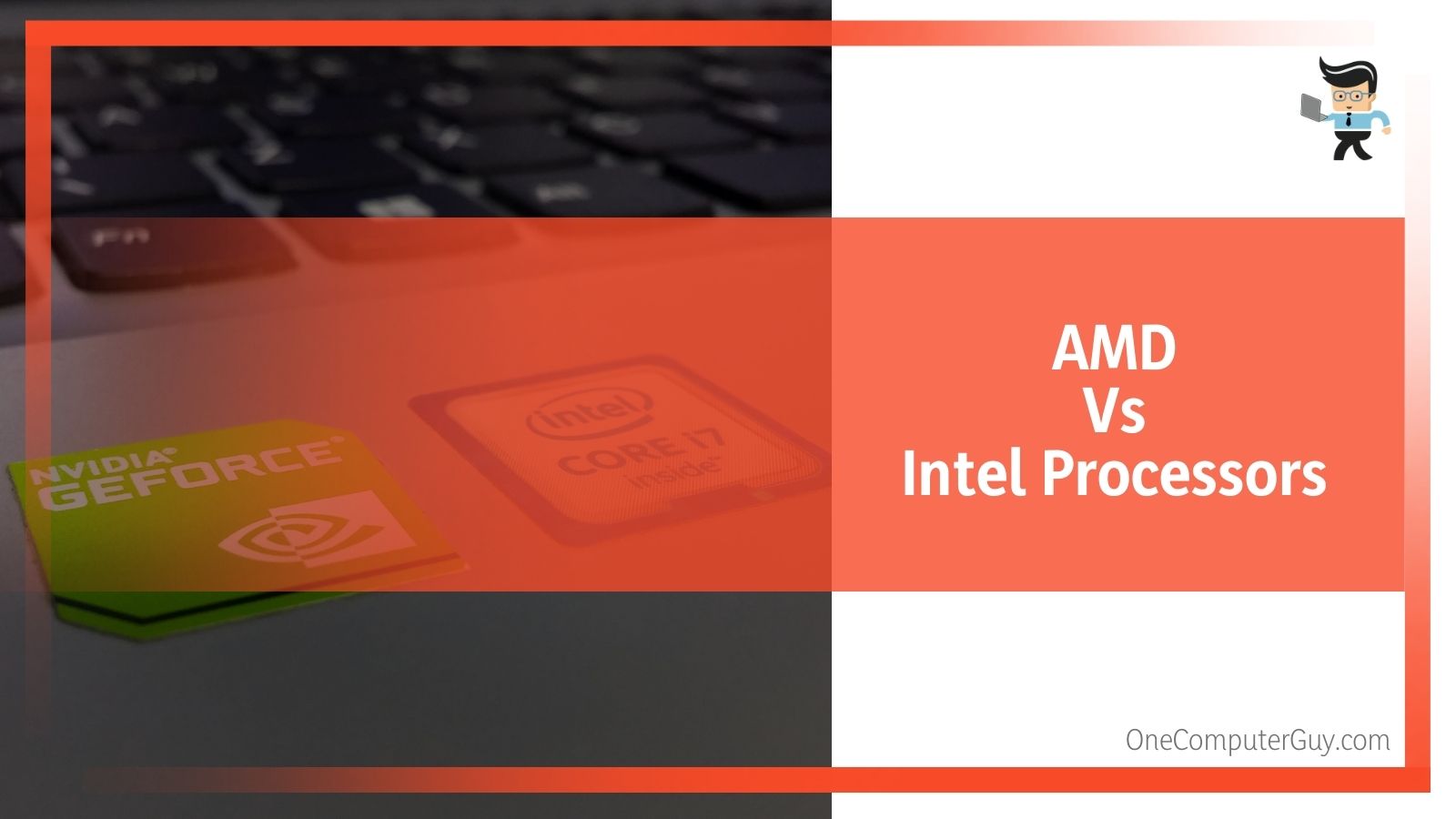 The most common examples of CPU from AMD are:

AMD doesn’t produce as many CPUs as Intel, but their CPUs tend to be the ones that push manufacturing forward. They use the latest technology in their builds. Their CPUs are generally more expensive but have incredible longevity.

Intel CPUs are used most frequently in PC builds and smaller companies.

The most common and well known Intel CPUs are:

For a long time, Intel was known as the “gold standard” for all CPUs, so it has a deeper base of CPUs. They have slowed down production in the last few years, however. Intel has created some great processors that have changed the game, but they have also had some clunkers.

One manufacturer we don’t talk about all that often is ARM CPUs, even though they may make more CPUs than any other company.

These CPUs are used in tablets, smartwatches, and smartphones because they are smaller and require less power. In turn, they are cheaper and generate less heat.

Can a Computer Function Without a CPU?

A computer cannot function without a CPU because it helps with the transmission of data. It can function with a bad CPU, but it is a difficult experience. You want to ensure that your CPU is compatible with everything else in your computer, in particular your motherboard.

In general, people need more cores and a better type of CPU if they do things like video editing, gaming, streaming, and more. There are budget-friendly options out there, so don’t always take money as the gauge for whether or not a CPU is a good match.

If you aren’t experiencing any problems with your computer, or you don’t do any of the things listed above, you can buy a more basic CPU and spend your money elsewhere.