For people who are building their own PCs, Intel has two main chipsets that people compare: x299 vs z390. 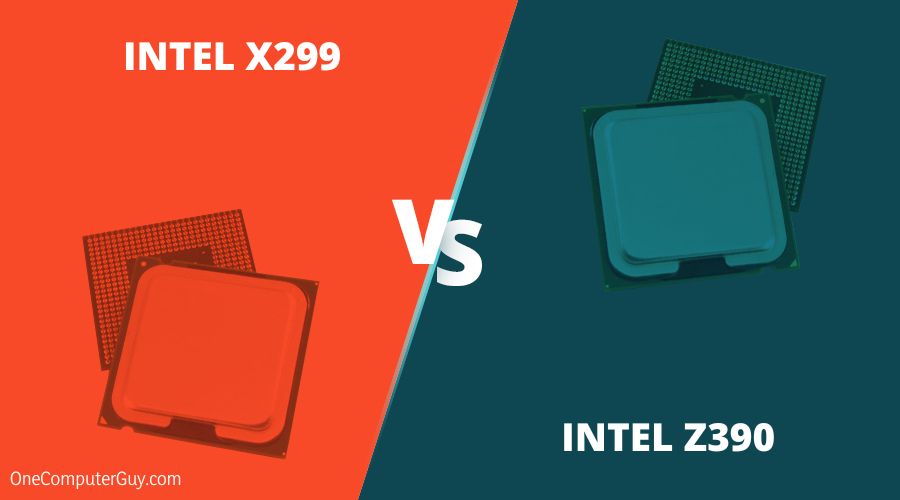 If you are in the market to build a new computer and you need to know which chipset is the best bet for you, it is important to do your research. Luckily, our team of experts has strong opinions on which Intel chipset is better for you.

Let’s first compare the two quickly and then pull them apart to see the individual reviews of the Intel x299 and the Intel z390.

First, let’s do a brief overview of both chipsets to see what you are looking at when you buy a motherboard that uses either x299 or z390. In general, our experts have noted that the x299 motherboards tend to have more features and are more expensive.

The x299 chipset is part of the Intel 200 series desktop chipsets built under the Kaby Lake product line. It was launched in the second quarter of 2017 for desktop builds only.

With a bus speed of 8 GT/s, this is a pretty fast chipset. It does support overclocking and does so without putting out a lot of heat, though you will need a cooling system.

The x299 doesn’t have integrated graphics, which is a bit of a bummer for gamers. However, there are some expansion options that you may want to consider.
Size: If you are trying to build a low-impact build, you can use this chipset because it is on the smaller side.

There is a reason this is one of the top chipsets that builders want. It has just about everything you could need for a good build and the technologies built into it are so impressive that it can be used for a long time.

The z390 chipset is part of the Intel 300 Series Desktop chipsets that were built for the Coffee Lake products in 2018. It is only used in desktop builds.

Like its predecessors, the z390 chipset and products have a bus speed of 8 GT/s, which was standard by the time it was developed. It does support overclocking as well, but you will need to have a good cooling system and pay attention to overheating.

There are integrated graphics with this chipset, which is a huge win for gamers and anyone who does a lot of visual work.

The size for this is standard, it isn’t too big or too small. If you are trying to build something smaller, you may want to look elsewhere.

The main difference between z390 and x299 is, X299 supports a larger number of processors, memory up to 128 gigabytes and has wider range of choices compared to Z390.

When comparing the two chipsets, sockets, and motherboards that come with each one, we have noticed a few things that need to be compared. Let’s break it down:

Both of these chipsets are fairly new and have upgrades available often. Neither is exactly going to become obsolete or force you to upgrade any time soon. However, the x299 supports a larger number of processors and it has more PCIe lanes available, which means it won’t be as limiting if you do want to upgrade at some point.

Both of these chipsets support DDR4 RAM at pretty high speeds (you shouldn’t go towards the upper limits of 3000Mhz with either one. However, the z390 has a max of 64 gigabytes while the x299 supports up to 128 gigabytes. For most users, either option is good enough. For those who do serious work or gaming, however, you may want more.

Currently, both of these products are readily available on the market and secondary markets. You can find refurbished tech as well as new pieces for your build. However, we have noticed that you will have a wider range of choices with the x299 chipset for all of the pieces of your build in comparison to the z390.

What are the Main Differences Between The x299 Chipset and the z390 Chipset?
We compare these two chipsets because they are the most popular and choosing one means quite a bit for the rest of your computer build. When you pick a chipset, you are limiting the rest of your options. They support different sockets and processors.

The x299 uses the LGA 2066 socket, which supports the Intel Core X Series processors (known as Skylake-X and/or Kaby Lake-X to many). These processors range from 4 cores to a whopping 18 cores with 36 total threads. They are designed for gamers or those who do heavy workloads.

On the other hand, the x390 supports the 8th generation Intel Core Processors (known as Coffee Lake), which has a limited core count of 6-12.

There are a few other differences to note:

● The onboard graphics of the x390 are superior to that of the x299 builds. You will still need to supplement with the x390, but it is important for better visual performance.
● The Thermal Design Power (TDP) is quite different between the two chipsets and processors. The x299 processor releases up to 165W, whereas the z390 processors have a 95-watt TDP.
● Each one has different PCIe lanes. The x299 processors have up to 44 lanes, meaning they do support dual graphics cards or other add-ins. The z390 processors have up to 16 lanes, but usually have fewer.

Really, the final verdict as to what the winner is in the battle of the x299 vs z390, depends on how you are going to use your PC. For gaming, you absolutely want to go with the z390 chipset to get the best performance. While the x299 has some great aspects, it isn’t quite there for gaming yet.

However, you do need to consider that the x299 will future proof your build. If you are going to use your computer mostly for multitasking and heavy application usage, then the x299 is for you.