If your computer says please power down and connect the PCIe, it means that your GPU isn’t getting enough power from where it is connected to. Power consumption is a critical but overlooked factor in PC building. 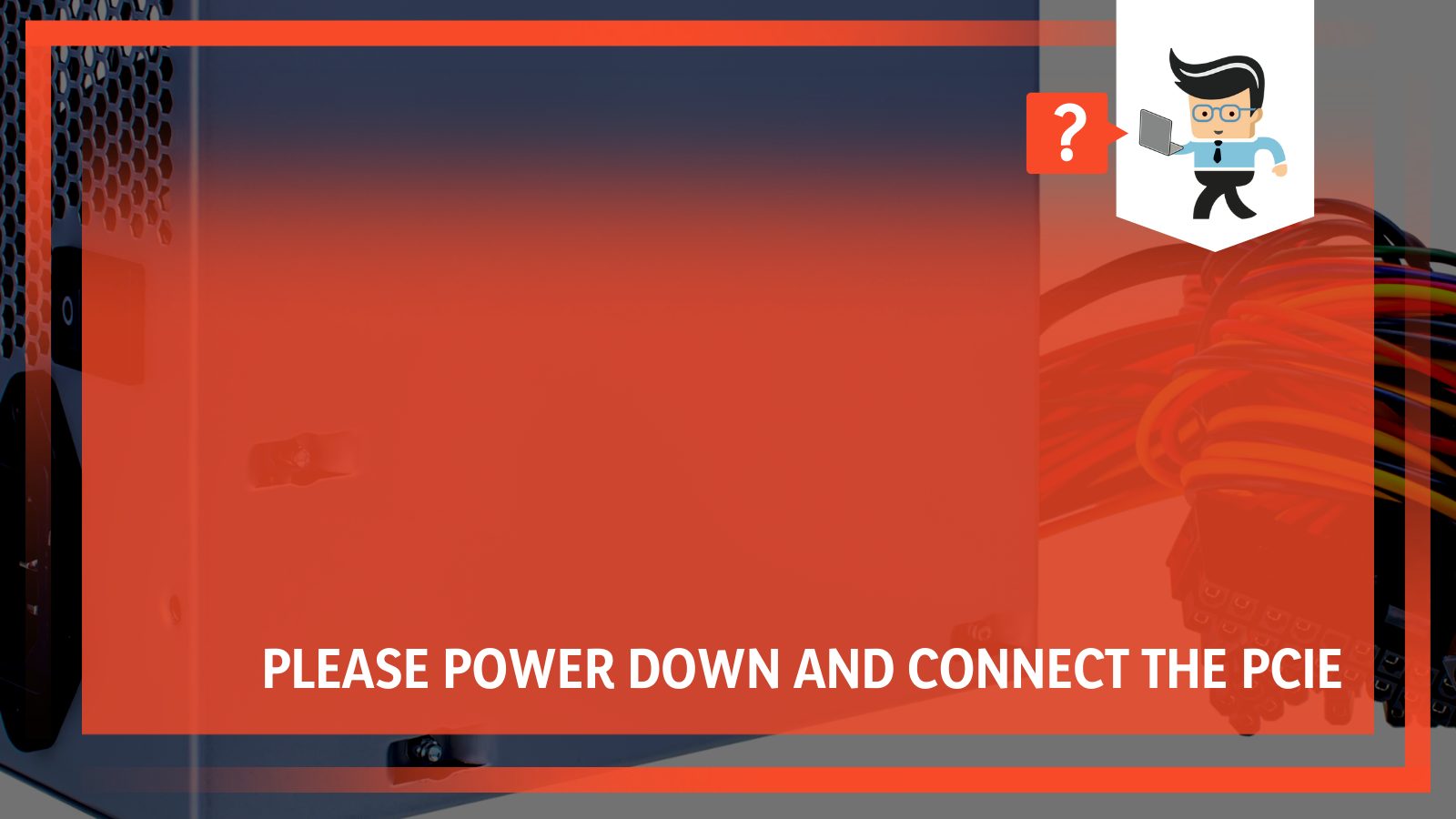 When you have a quality GPU, your PSU’s power connectors are bound to take a beating. In this article, we’ll be talking about different adapters and connectors for your graphics card, as well as how to reconnect your PCIe power cable to fix the please connect PCIe power cable problem.

Many low-tier to mid-tier GPUs use the PCIe x16 slot as their power sources. However, demanding or top-of-the-line PSUs utilize an 8-pin or 6-pin connector as their power connectors. You can have all of these mixed up, especially when building a system with multiple graphics cards or with an SLI.

In cases like these, you’ll need to power your GPU with enough voltage for two or more GPUs. To understand this better, we’ll talk about the different connectors, and their power requirement as knowing these will help you fix the please power down and connect the PCIe power cables for this graphics card issue.

Motherboards that utilize PCIe x16 power connectors can provide up to 75 watts of power. Some of them may come with multiple connectors that allow you to connect more than one GPU. As we mentioned earlier, connecting more than one GPU means there’ll be an increase in power requirements.

A typical 6-pin connector has the capability to supply graphics cards with an extra 75 watts of power. With this connector, your GPU can pull up to 75 extra watts of power from your PSU, making it a total of 150 watts when paired with the 75 watts from your motherboard. 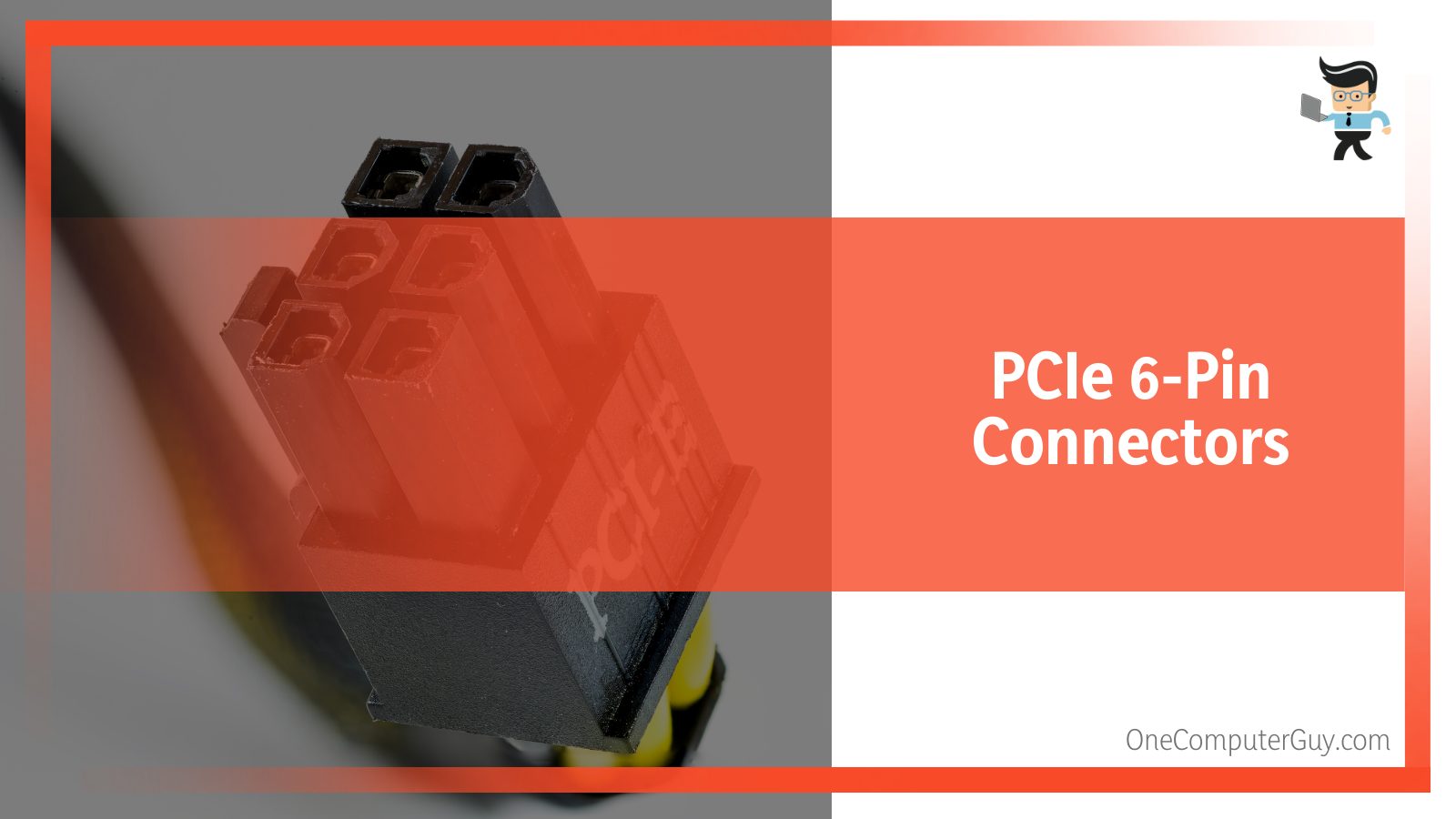 Since 150 watts is enough for most mid-tier graphics cards, you’ll find many of them with a 6-pin power connector. These connectors are known as PCI Express Graphics cables (PEG cables) or PCI express cables.

However, there are exceptions. If you buy a power-hungry graphics card, you’re bound to find an 8-pin connector as well as a 6-pin connector in the box.

For instance, the GeForce RTX 3060 from NVIDIA comes with both connector types given the fact that its maximum power consumption is about 170 watts. So with a card like this, your PC needs to have about 340 watts of power, so you don’t experience the “please power down and connect the PCIe” problem.

There are even more exceptional situations where a GPU comes with a 6-pin connector and two 8-pin connectors. This means you’ll need up to 375 watts of power for the said GPU. And don’t forget that you still need to consider the power consumption for your CPU, which is another huge power consumer, as well as the rest of your computer components.

Although they are rare, there are also enthusiast GPUs that need up to three 8-pin connectors to get the necessary power. These graphics cards are usually on the highest end of the spectrum and are designed to offer the best overclocking and cooling possible. A typical example of such a card is NVIDIA’s GeForce RTX 2080 Ti Lightning Z.

Generally, your computer won’t have any issues if you utilize a PSU capable of providing up to 650 watts of power. However, if you’re looking at a long-term build that can be upgraded in the future, or you’re building a gaming PC with a GPU like the RTX 3080 or 3090, you can look at buying a PSU with more power.

Note that more power on a PSU means more chances of overheating, which means you need to make careful considerations before buying a more powerful PSU.

The advent of the RTX 3000 by NVIDIA saw the introduction of the 12-pin connectors. This graphic card power cable was made out of necessity because NVIDIA was looking for a way to power its most powerful cards and came up with an excellent solution.

While a 12-pin power connector is about the same size as an 8-pin connector, it has the ability to draw out more power from your PSU. However, at the time the GPUs were launched, NVIDIA had not released the 12-pin connector to the public yet.

Instead, the brand made an adapter that connects two 6-pin connectors to the interface of the graphics card’s 12-pin slot. The original 12-pin connector is touted to be able to provide up to 648 watts of power.

Converters or Adapters for Connectors

Experiencing compatibility issues when building a PC is no news. But this same phenomenon applies to power connectors as well. Fortunately, computers are designed and built by engineers who naturally like to modify hardware to suit their needs. 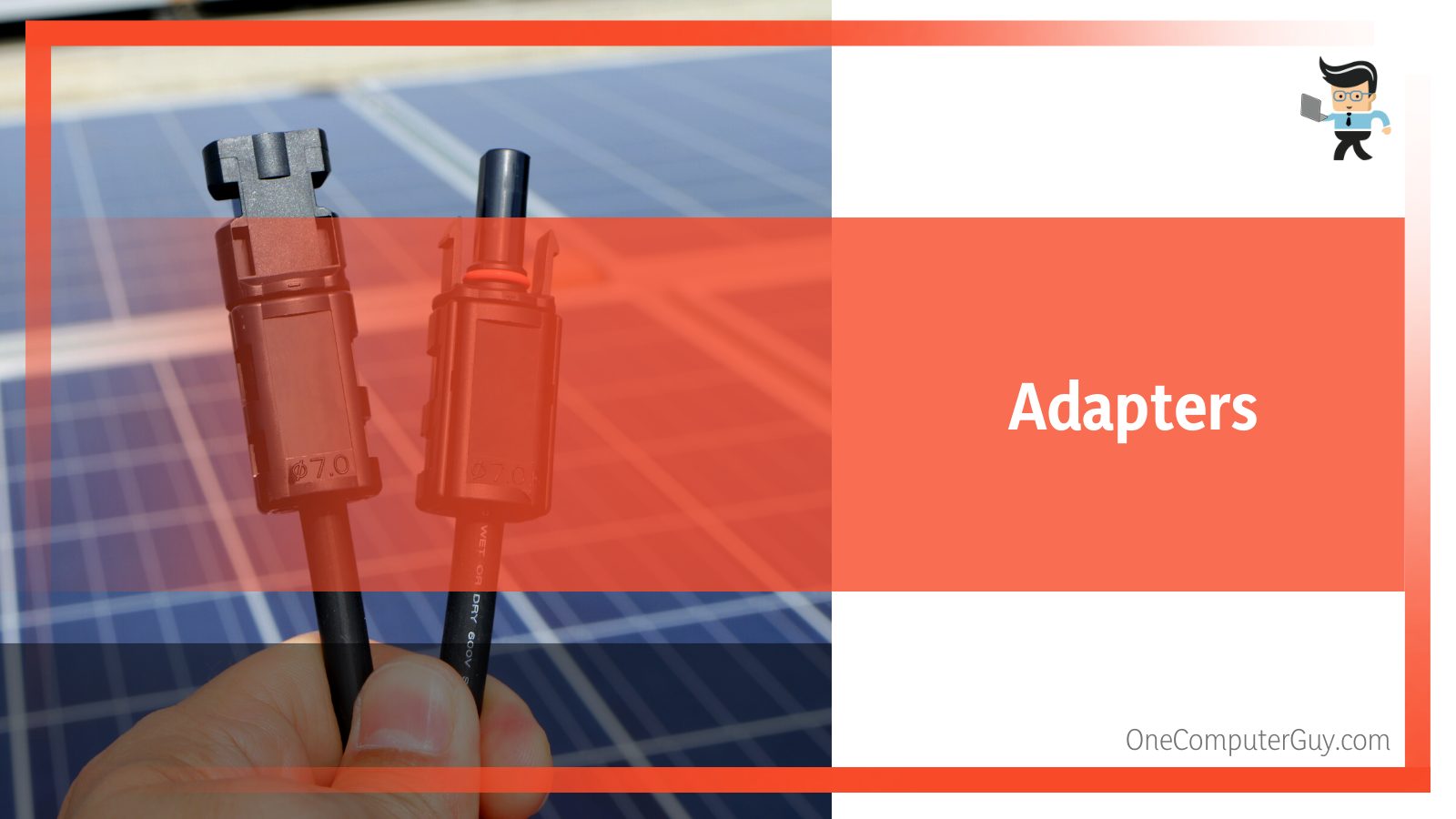 That is why a company known as Molex started creating these pin converters in the late 50s and early 60s. Since then, these connectors have been referred to as the Molex converters or Molex adapters irrespective of the company that makes them.

If your PSU doesn’t have a 6-pin power connector, but your graphics card requires one, this PCI express power cable connector is what you want to buy. PSUs in this kind of situation are older generation PSUs, so you may want to start thinking about getting an upgrade.

However, if you want to keep the PSU because of one factor or the other, you should note that this adapter often needs two 4 pin connectors. Although sometimes, you’ll find one that requires a 4-pin connector.

This adapter cable connects two 4-pin connectors to an 8-pin connector interface. It’s a cable useful for graphics in the upper mid-range to high-range.

Top-class graphics cards made today often feature 8-pin connectors that aren’t available on many PSUs. If you are in a situation like this, the 6-pin to 8-pin PCIe power cable is the right option for you.

As we mentioned earlier, NVIDIA’s 12-pin power connector is the latest technology featured in the brand’s 3000 series GPUs. And since there were little to no PSUs with 12-pin connectors at the time these GPUs were launched, NVIDIA designed a 2x 8-pin to 12-pin adapter and shipped it with the products.

With this adapter cable, you’ll be able to convert your SATA connectors to 6-pin connectors. However, this isn’t recommended as SATA may not handle the amount of power required by your GPU. You don’t want a situation like this, especially if the cable comes with a label saying “SATA only.”


The “please connect PCIe power cable” issue is a problem that’s often caused by an insufficient power supply from your computer’s motherboard or PSU. Other faults include the GPU not sitting well in its cage and having a bad port or connector.

Below are the fixes you can apply to resolve this graphic card power cable problem.

Like we noted above, not getting enough power from your PSU or motherboard is the main reason why your GPU may start having the “please power down and connect the PCIe problem.”

What you want to do is ascertain the amount of power needed for your GPU to function properly. Then use a tool like HWInfo to see whether your GPU is getting enough power or not.

With a 6-pin connector, you’ll get up to 150 watts when paired with the 75 watts from the x16 PCIe connector. Using an 8-pin connector increases the power supply, and a 12-pin connector bumps it up even higher.

If you’ve connected your power cable to your PSU but are still getting the “please power down and connect the PCIe” error, then you may want to get a new PSU. It’s probable that your PSU can’t supply enough power to your GPU, then share the rest among the remaining components in your PC. So, getting a better PSU may be the ideal solution for you. 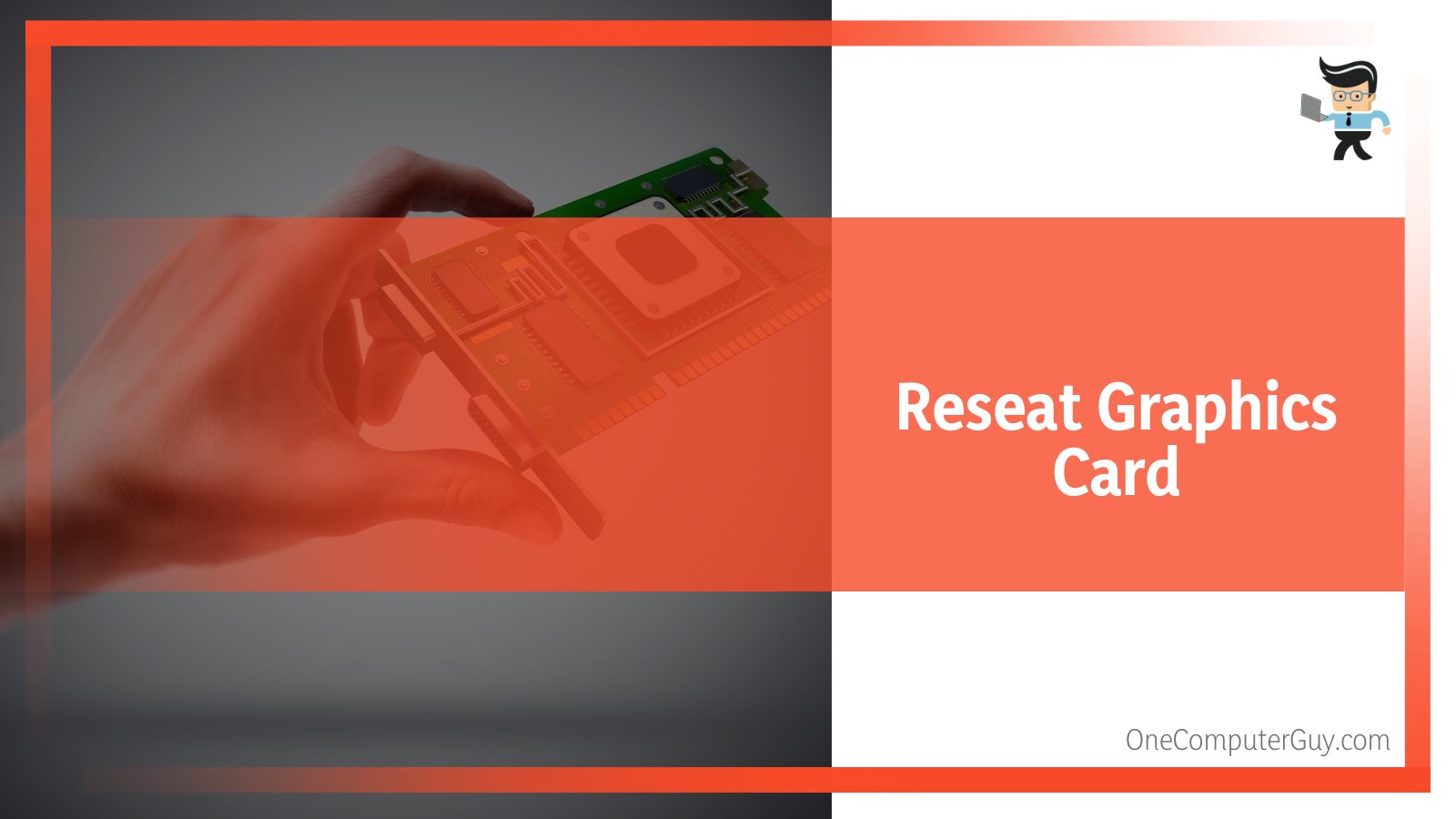 Even if your GPU or PSU is a new one, there’s no telling what might have happened to their connectors during transit or even quality control checks. Make sure your connectors aren’t damaged or crooked in any way.

If you’re using an adapter, make sure it’s not a SATA to Molex adapter as using this kind of adapter would result in burnout if your graphics card pulls too much power because of overclocking or a higher load.

We’ve discussed the different power connector cables on the market and how you can resolve the please power down and connect the PCIe power cables for this graphics card issue.

Here are a few reminders to keep in mind:

You should be able to fix the “please connect PCIe power cable” issue with the explanations and solutions offered above. Remember that using a SATA to Molex adapter can cause your SATA connector to burn out as it isn’t designed to provide power to your GPU.

Upgrading your PSU to one with the right connectors is highly recommended. But if you must use an adapter, make sure it’s a Molex to Molex adapter.