An i5 4690K overclock can help you unlock the processor’s full potential. Even though the 4690K is good enough on its own with its above-average effective speed of 103, sometimes you just need to overclock it. 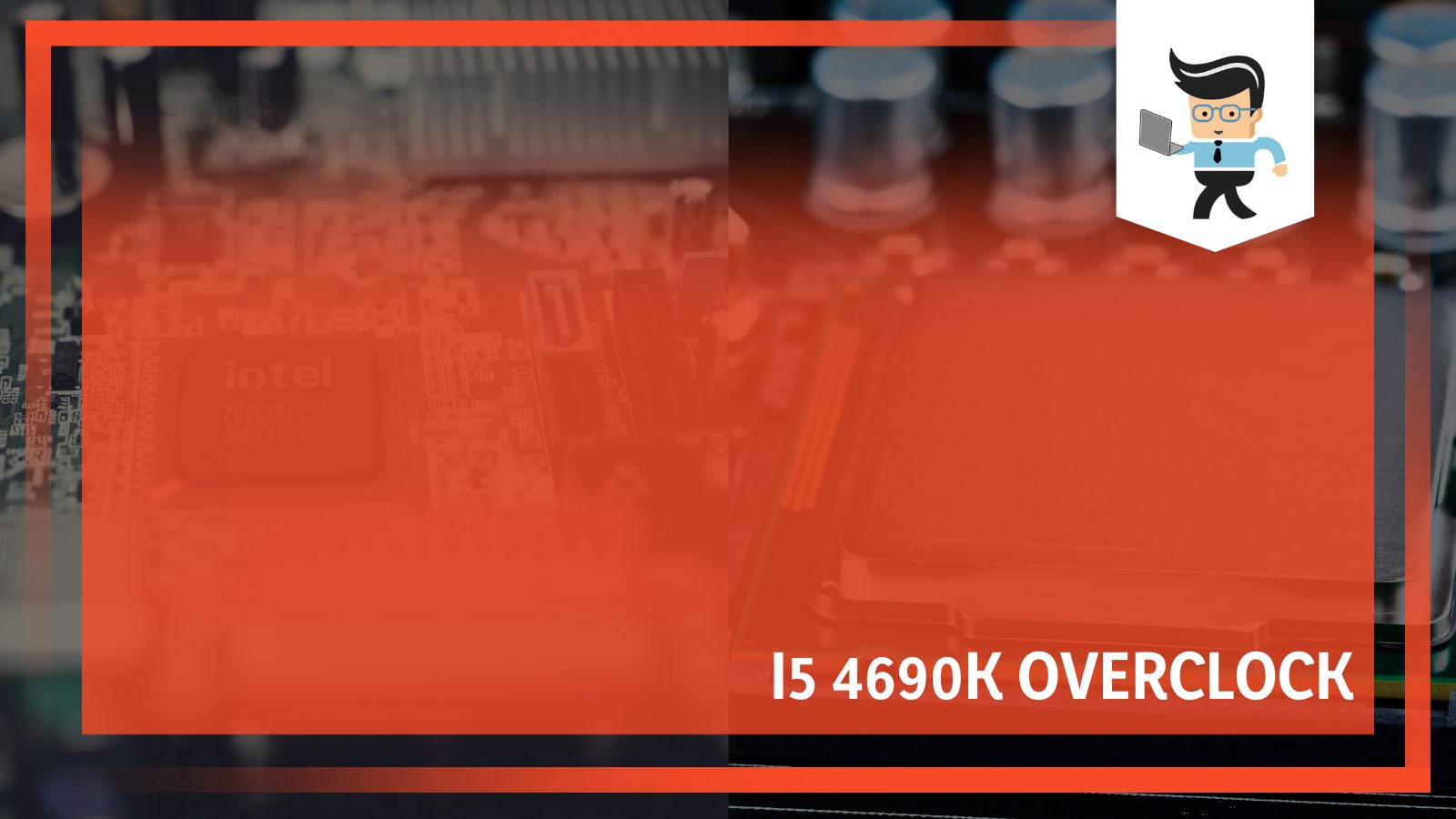 For example when playing the latest CPU-intensive game like Civilization 5 or Far Cry 5 or doing some demanding task like 3D rendering or video encoding.

Read the article to find out how.

Overclocking an i5 4690K: The Process Explained

It is possible to overclock an i5 4690K, provided that it’s unlocked and from the K series. You can overclock the Intel Core i5 4690K and take it up from its stock 3.9GHz maximum speed (with the turbo) to up to an overclocked speed of up to 4.4 GHz or even more than that, depending on your cooling system. If you go beyond that, your system might become unstable, crash, and display a blue error screen.

As per different tests and reports, overclocking can give you a maximum gain of up to 8.5% in terms of performance.

Make sure you don’t confuse the i5 4690K with the i5 4690. The latter is from the non-k series, which shouldn’t be overclocked. Processors with K in their name are specifically designed for overclocking. These include processors from Haswell, Sandy Bridge, and Ivy Bridge.

When it comes to overclocking the CPU, you need to consider the following:

Experts recommend overclocking only through the BIOS and not some i5-4690K overclock software, especially for beginners. Nearly all motherboards come with a UEFI/BIOS along with comprehensive options for overclocking, allowing users to get the maximum performance from the setup.

The maximum limit for each chip varies, so you’ll have to experiment a bit to really understand how far you can overclock your i5 4690K. While some chips can run on 4.4 GHz without any problems, others fail to cross even 4.3 GHz.

Generally, an i5 4690K can support overclocking up to 4.5GHz on all its core and sometimes even more than that if you’re lucky. The safest and simplest way to test your i5 4690K to its limit is to disable the turbo boost in BIOS and increase the CPU’s multiplier slowly. By default, the multiplier should be on 35 or auto.

The overclock settings will differ from one chip to another, which is why you’ll have to experiment a bit here, too.

As a good starting point, you can make the following changes:

And then try to boot the processor at 4.4 GHz. If it fails to boot, slowly reduce the multiplier and then try booting again. Once you find a speed that you can boot the chip at, you will have to test for stability. To do so, you need to adjust the clock speed bit by bit and continue testing the stability until you find a speed you’re happy with.

If 10 minutes of stress testing your CPU at these settings shows stable results, you can increase the V core and the multiplier. In most cases, a 1.2 Vcore at 4.4 GHz tends to fail the stress test after a couple of hours. But you might be able to stress-test the processor at 1.25V at 4.5 GHz for up to 7 hours before the test fails.

You also don’t need to worry about i5 4690K hyperthreading affecting the stability. This is because the processor doesn’t allow for hyperthreading; it just has four cores/threads.

When it comes to overclocking, there’s no safe overclocking for a certain chip. Each chip is different, but most people can get around 4.2 to 4.4 GHz with a decent motherboard and cooler. 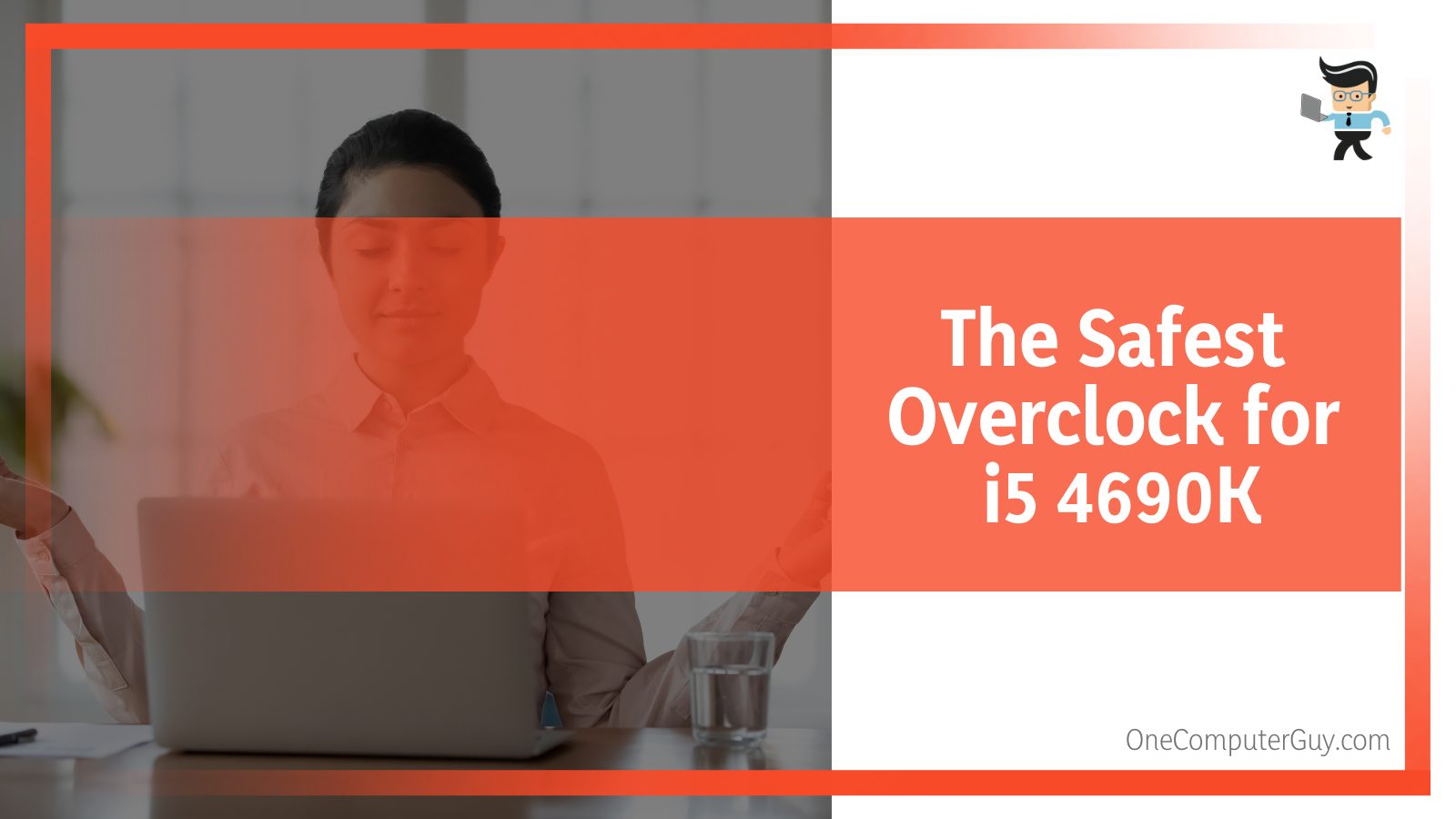 The safest way is to continuously test the system’s stability before increasing the multiplier. In case the system becomes unstable, you can either try to stabilize it by providing more voltage to the processor, or you can go back to the latest stable clock.

You also need to be careful of the system temperature during load. If it gets too hot, decrease both the voltage and the multiplier. As a general rule, the CPU temperature should be less than 75C for daily use. It’s advisable that you change the thermal paste before overclocking your CPU if you haven’t done so within the last year.

So to sum it up, a safe overclock is the maximum speed you can take the processor to without providing too much voltage or without it overheating.

If you use the default fan that comes with the CPU package, you won’t get a lot of room to overclock. In fact, some coolers fail to cool the CPU enough, even at its default speed. Meanwhile, if you have a liquid cooling setup for your CPU, you might be able to push your i5 4690K more and get better overclocking.

If you’ve ever done an i5 4670K overclock, you know what to expect from overclocking its successor, the 4690K. The two have similar architecture, and as such, there’s not a big increase in performance.

But if you can get all four cores to overclock to nearly 4.5 GHz, you can expect to see a 20% performance increase in different CPU benchmarks. This means you can get a considerable boost not just for productivity tasks but for gaming, too.

Different i5-4690K benchmark tests suggest an average bench of 77.7% and above-average consistency, which means that the processor performs quite consistently under different real-world conditions.

Despite the lack of integrated graphics, the 4-thread 4-core 3.5 GHz processor is quite powerful and can handle very demanding games well. 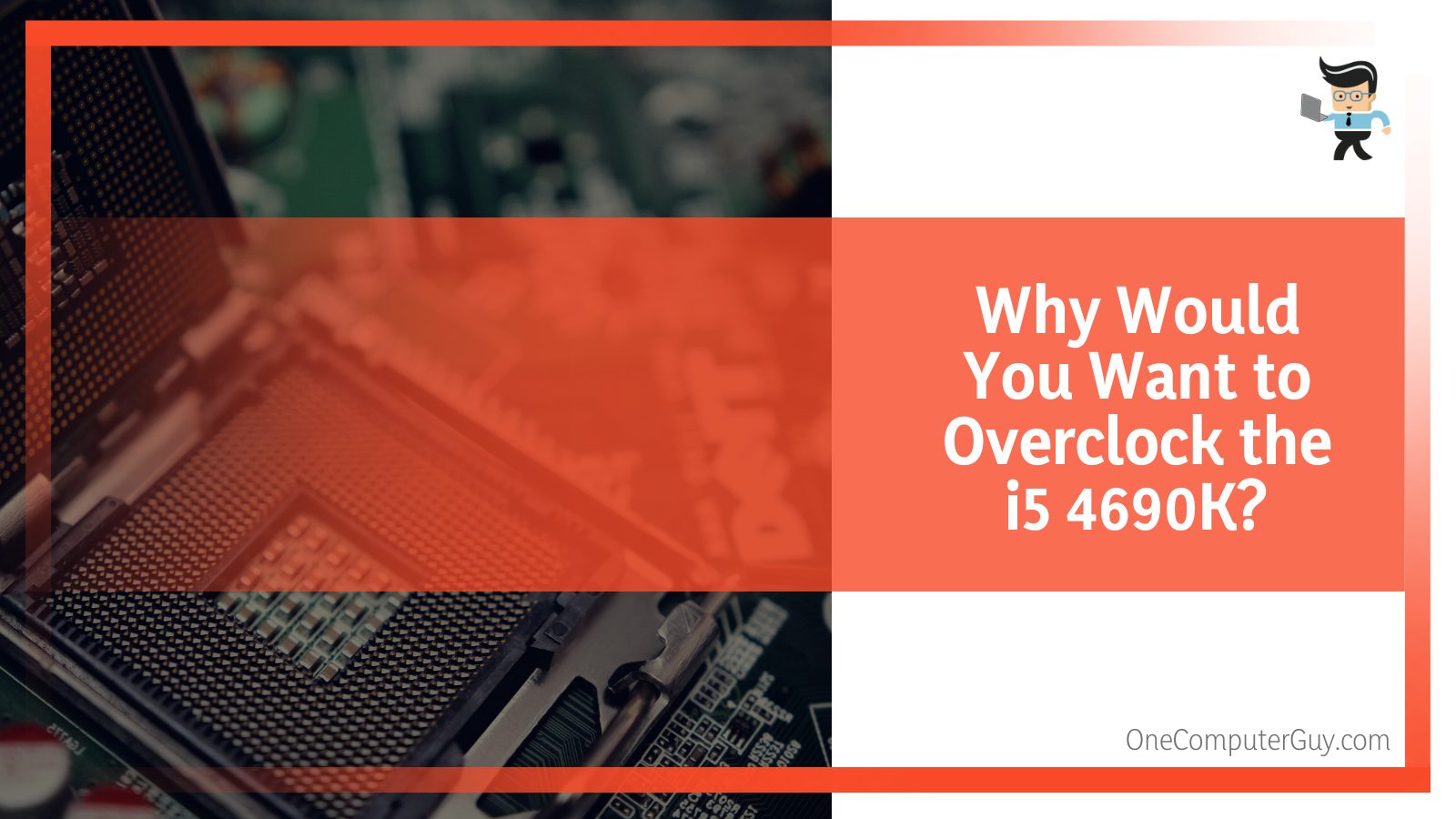 It also has excellent dual- and single-core performance, which is 12% better than the average performance of similar processors. Plus, Intel’s auto-overclocking feature (turbo boost), increases its clock speed to 3.9GHz, allowing you to achieve higher frequencies.

But it can sometimes experience a bottleneck, especially with CPU-intensive tasks. In such cases, overclocking can help.

– What Performance Gains Can You Get By Overclocking an i5 5690K?

You can notice a big difference in terms of performance when you’re able to utilize the CPU to its maximum potentials, such as when using mathematical software like Wolfram Mathematica or MATLAB, rendering FHD videos, or playing games.

However, if you’re just a basic user, you won’t really notice a lot of difference. In fact, if your CPU use is limited to very basic tasks, you don’t even need to overclock your processor.

Note that your CPU usage doesn’t need to be at 100% if you want to get a performance gain from overclocking your CPU. The only time you can see your CPU usage touch 100% is when all the threads and cores are occupied with some tasks. Overclocking can help if one or two cores are heavily tasked, but this won’t show 100% CPU usage in a graph.

– How Is the i5 4690K Overclock vs Stock Performance for Gaming?

The difference in the stock and overclock performance of the i5 4690K is quite noticeable, especially when it comes to gaming. An overclocked 4690K provides a better average FPS and low 1% FPS than a stock 3.9GHz when tested on a number of games, including CS:GO, Rainbow Siege Six, Overwatch, Destiny 2, Resident Evil 2, Modern Warfare, Battlefield V, Far Cry, and Apex Legends.

Programs that scale linearly to the processor’s clock will also notice a great difference.

We’ve covered nearly everything there is to know about overclocking the i5 4690K. Let’s quickly sum up all that we’ve talked about:

Just make sure you keep a close eye on your PC’s temperature and stress test it for stability to find the right overclock settings and not harm it.