Dual-band vs tri-band is a hill you’re likely to get stuck on if you’re looking to get a new router. 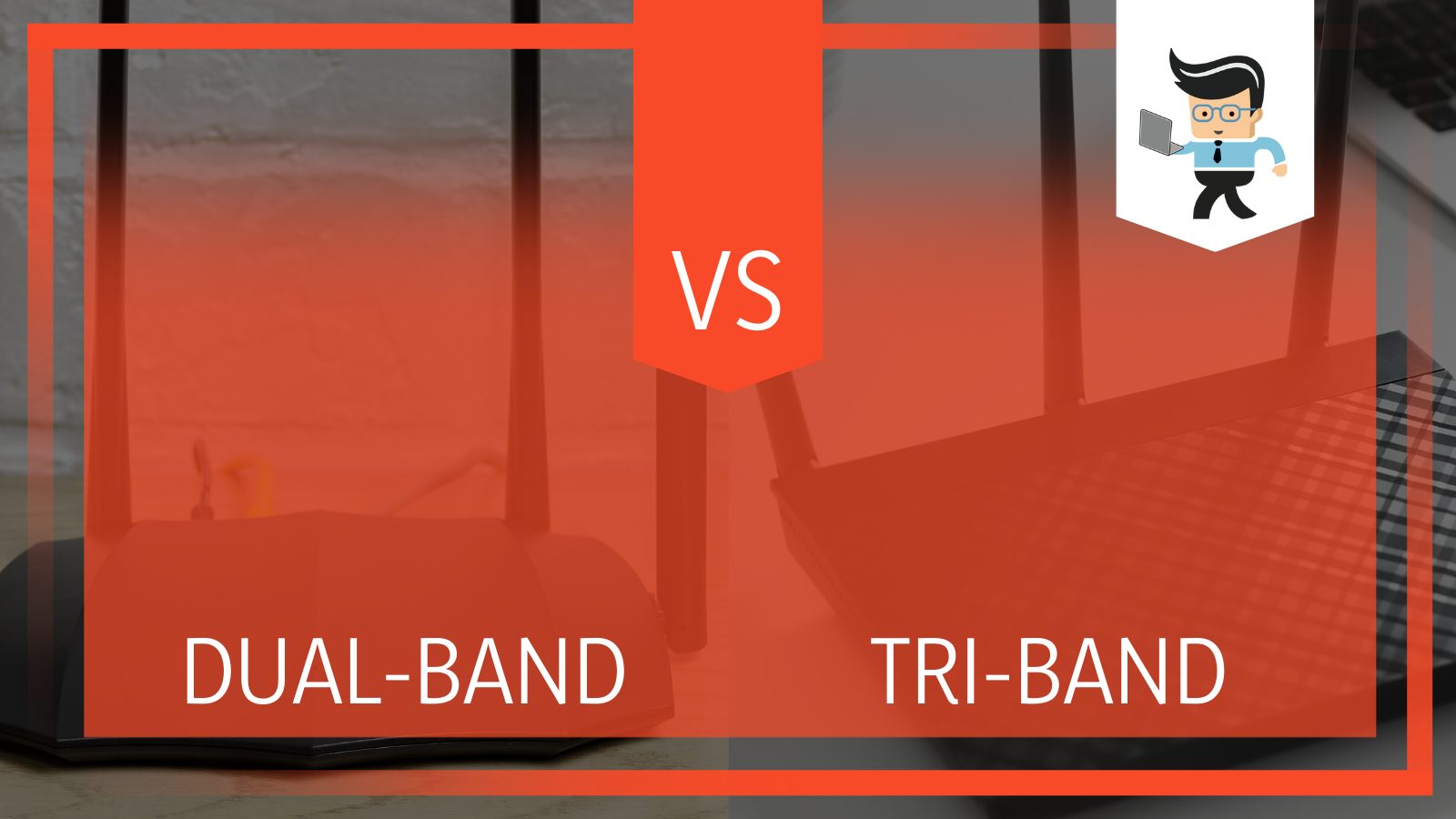 Before we dive deeper into this post, we’d like you to understand the history and names of each Wi-Fi standard we’ll be talking about. The reason for this will become evident as we go deeper into the dual-band vs. tri-band discussion.

Until recently, Wi-Fi standards used an arcane naming method to distinguish between the most recent and faster standards and their predecessors. The Wi-Fi Alliance used names like 802.11n, 802.11ac, and more to tell which standard was faster.

This naming scheme was confusing, and the Wi-Fi Alliance opted for a simple naming system that uses version numbers. Now, the previous Wi-Fi generation, 802.11ac, is known as Wi-Fi 5.

– The Invention of Wi-Fi

To understand the differences between dual-band vs tri-band routers, you must first know how they were made.

The creation of a committee known as the 802.11 led to the invention and release of Wi-Fi in 1997. Afterward, the IEE802.11 was created, a set of standards to define the communication between wireless area networks, otherwise known as WLANs.

With the standard in place, a basic Wi-Fi specification that allowed wireless devices to transfer two megabytes of data per second between each other was made.

For many years, the 2.4GHz frequency was the go-to option for Wi-Fi users. It was less expensive than 802.11a, had a more extended range, and worked with almost all mainstream devices.

In 2003, 802.11g was created. It was a combination of the faster speeds and longer range offered by the previous Wi-Fi standards. Routers had become better, too; they were becoming more powerful and offering better coverage. Wired connections were starting to fade out as Wi-Fi was beginning to catch up to the speeds they provided.

– What Changed Everything: The 802.11n Standard

The year 2009 came around, and the 802.11n (also known as Wi-Fi 4) standard was created. It was faster and even more efficient than the standards before it. The increase in efficiency led to the invention of ‘multiple input multiple output‘ data, otherwise known as MIMOs.

MIMOs use multiple antennas to make the communication between the receiver and the antenna stronger and better. Users were able to transmit and utilize more data without needing to get higher bandwidth.

– Too Much Fan Love

The 2.4GHz popularity meant that more users were using the channel. Every device, from Bluetooth devices to baby monitors, was using the same frequency. This demand led to the band becoming slower, and users had no choice but to look towards the short-range 5GHz channel.

– The Advent of Dual-Band Routers

Dual-band routers were invented to resolve the overcrowding on the 2.4GHz channel. They were designed with two types of wireless radios that could support both 5GHz and 2.4GHz frequencies at the same time.

Dual-band wireless routers were also made, so the devices close to the routers automatically connected to the 5GHz band. Devices behind walls or at a longer range connected to the 2.4GHz, which served as backup.

This setup reduced the load on 2.4GHz and got more users on the 5GHz frequency.

– Trying to Get More Users Onboard

Also, 2012 was when the Beamforming concept was introduced as 802.11ac could support multiple antennas, allowing users to send data faster and efficiently.

Usually, when you send data or transmit a signal via wireless channels, the data spreads in all directions hoping to reach the target device. Beamforming focuses the data transmission and signals on the target device, allowing for a faster and reliable connection.

What Are Dual-Band Routers

As we noted earlier, dual-band routers were designed to bring more users to the 5GHz channel. The 2.4GHz channel gets a lot of interference since too many devices, such as Bluetooth gadgets, smartphones, and even home appliances like microwaves, use the channel. It’s just too saturated. 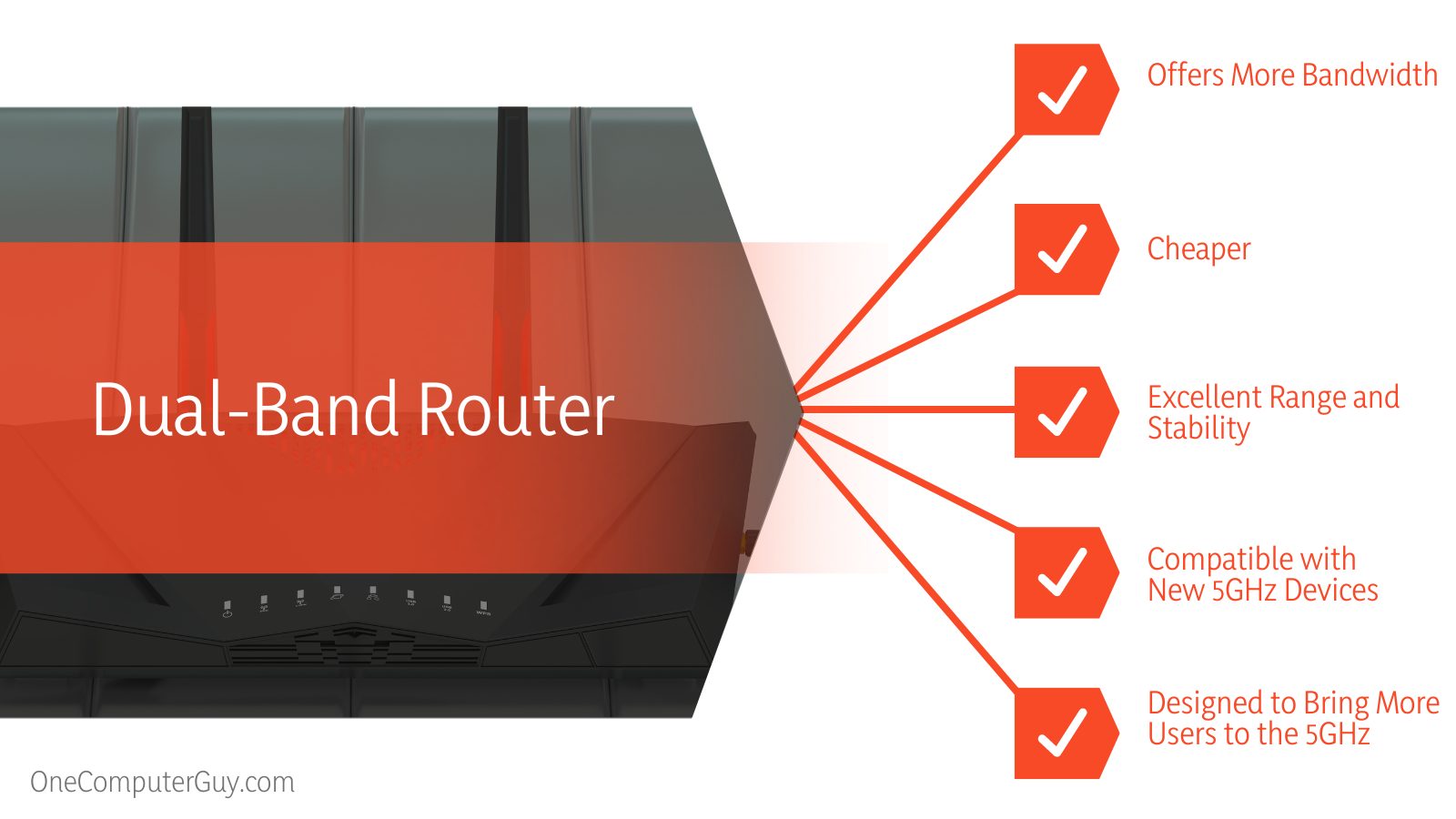 Soon after 2.4GHz was introduced, many urban areas started having issues with it. It became slower and unreliable as everyone’s devices were on it. Unfortunately, that has remained until today.

Although the 5GHz band was a tremendous single-band solution, it wasn’t extremely fast at the time. It had a shorter range, and most people had 2.4GHz-only devices at the time. The channel couldn’t survive on its own as nobody wanted a 5GHz only router.

This issue led to the co-existence of both bands in what is now known as the dual-band Wi-Fi router. You get backward compatibility and excellent performance from a single device. Everyone is happy.

What Are Tri-Band Routers?

Now, a Wi-Fi client or device can only connect to one of these channels at a time. This feature means that the most you can get out of our router example is 1733Mbps. But what if you have more than one Wi-Fi device? Your router will need to share the speed in half with two devices, providing each device with 866Mbps.

Now imagine if you have about 10 devices connected to your router; the best speed you’ll get is just about 170Mbps. A hundred clients reduce the speed even further as they’ll only get about 17Mbps.

In an ideal world, a home wireless router can host about 253 different devices. Imagine how slow the speeds will be if all 253 devices are connected to it.

– Tri-Band to the Rescue

In 2014, chip makers decided to make things better by creating tri-band routers that would offer two 5GHz bands and one 2.4GHz band. They also decided to split users on the 5GHz channels into two groups — the lower and upper channels.

Both channels get one 5GHz band each, allowing the total number of users on the channel to remain the same while enjoying more bandwidth.

In simple terms, a tri-band router allows you to enjoy twice the bandwidth on the 5GHz channel and one 2.4GHz band that can be used as a backup for long-range devices.

The speed provided by your internet service provider is not affected by your tri-band router. Your router can’t influence your ISP’s system.

That means if your ISP is providing you with slow internet, your router will only output what it gets from your ISP. While you may notice some speed differences between a 5GHz client and a 2.4GHz client, the overall speed will not exceed what your ISP is offering.

For instance, if your ISP offers a maximum speed of 300Mbps and your router can provide you with 1.3Gbps, the capped speed you’ll get will be 300Mbps since that is the top speed ISP is offering.

What Are the Differences Between Dual-Band vs Tri-Band?

The main difference between Dual-Bad and Tri-Band is, Tri-band offers three times the bandwidth, while dual-band is more affordable.

To make things understandable and more straightforward, we’ll list out the pros and cons of each router type.

You may not notice the difference between tri-band and dual-band routers if you don’t have many devices compatible with 5GHz.

When Should I Get a Tri-Band Router? 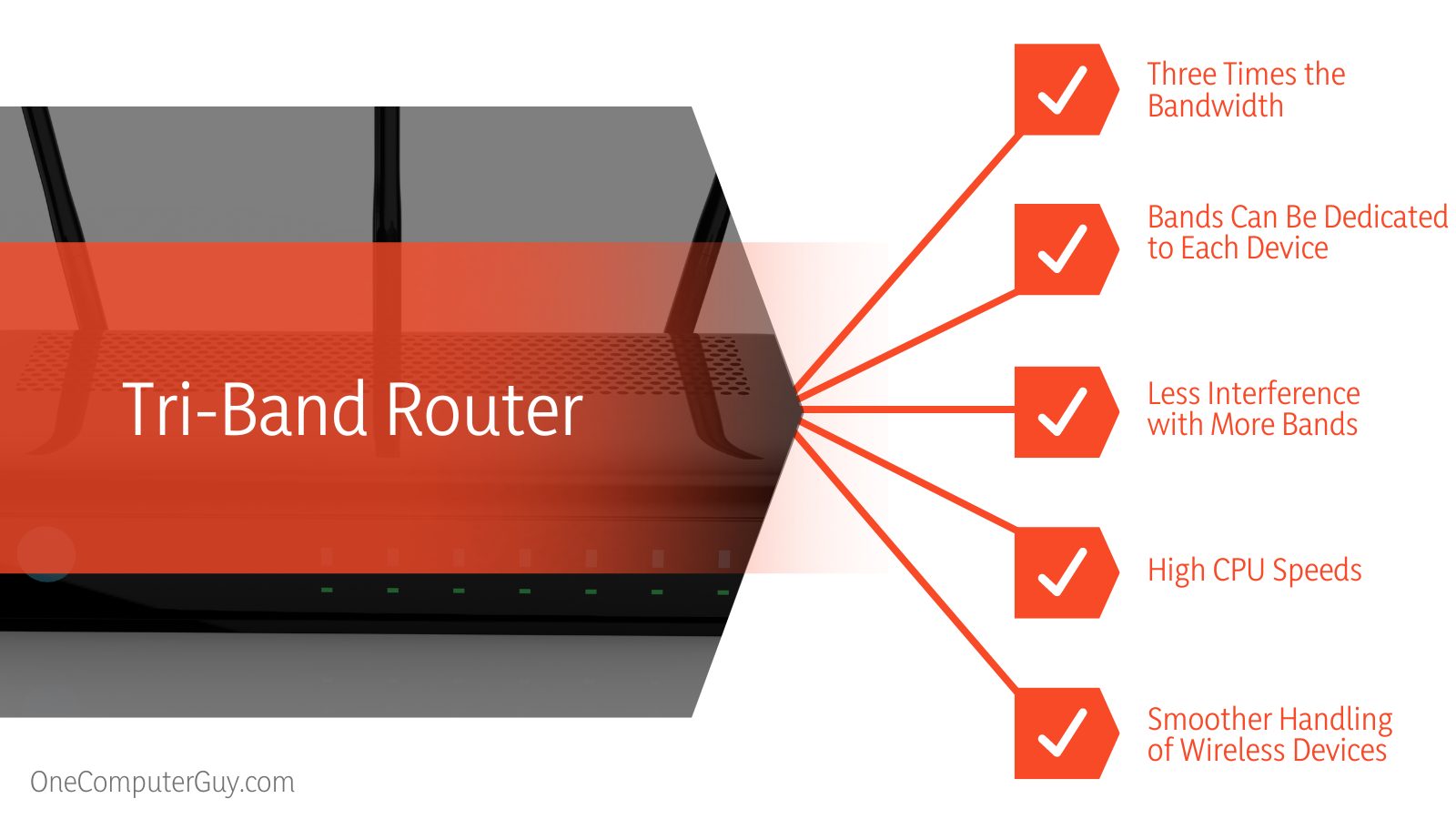 Getting a tri-band router would be overkill if you’ll be using it in a typical home setup. If you stay in a small apartment where all you’ll be connecting are your gaming console, a laptop, and a smartphone, a dual-band router is ideal for you.

However, if your home is set up in a way that: you’re streaming 4K videos downstairs, your spouse is watching recipe videos on YouTube in the kitchen, your guests are going ham on Call of Duty, and your children’s Pandora station is always on, then you might consider getting a tri-band router.

Other Use Cases for Tri-Band Routers

As we mentioned earlier, tri-band routers shine when there are many 5GHz clients on the network. They are also an excellent investment if you’re looking to use them for one of the following:

A wireless mesh setup is a system where multiple wireless hardware broadcasters link to each other without the need for network cables.

Using tri-band wireless routers for this system provides you with reliability and efficiency. The tri-band system will use one of its 5GHz bands as its dedicated server, which will link each broadcaster in the system. Clients or devices will have access to the remaining two bands.

With this system in place, your home network will become reliable and efficient. You’ll have better coverage and be less susceptible to signal loss. Also, the nodes in a mesh network configure and repair themselves when there’s an error because the nodes communicate with each other, providing data on path changes.

However, it’s important to note that using network cables to link the broadcasters in your mesh setup is still the most reliable way to get a non-compromising mesh system.

With a wired system, you’ll be using dual-band broadcasters as using a tri-band system would be overkill and a waste of money.

There are router combos that are sold together to create a mesh system. If you want to use different routers, ensure that they can be in a mesh setup.

Do you have a gigabit-class broadband internet connection? If yes, getting a tri-band router is one of the best things you can do for yourself.

A tri-band router will help you provide more clients on your network with high internet speed at the same time.

Tri-band routers are ideal for those who use extensive wireless networks for their local tasks instead of wired connections. You’ll get more local bandwidth, allowing you to backup, edit, and transfer files faster.

Also, if you have virtual reality headsets you use on Wi-Fi, a dedicated 5GHz or 6GHz band will significantly enhance your experience.

Thanks to the two 5GHz bands on tri-band routers, you can dedicate one 5GHz band to offer top speeds to specific clients while the other bands serve legacy clients in compatibility mode. This feature can be helpful if there are multiple clients with different Wi-Fi standards or tiers on your network.

Wi-Fi 6E and What It Means for Tri-Band

Wi-Fi 6E offers the same speed as Wi-Fi 6, and even their functions are the same. So why then do we need it?

Well, the 5GHz frequency isn’t solely made for Wi-Fi. It’s used for other applications, including radars, which are more important than Wi-Fi.

Now, when these prominent applications come to the channel, Wi-Fi users are kicked off for a short while to make the channel better and reliable for those applications, which is why when you’re close to an airport or weather radar, your 5GHz Wi-Fi band becomes unreliable.

The goal of Wi-Fi 6E is to provide the benefits of the 5GHz band through 6GHz, so users don’t experience those short interruptions.

However, there are some caveats:

We’ve covered a lot of points to help you understand the dual-band vs tri-band debate. Here are some key points to keep in mind if you’re looking to buy a router:

Getting a tri-band router would be overkill if you don’t have many 5GHz clients in your network. While the extra band helps and would be great to have, it’s not a must-have. If you can afford it, or you’d like to use it for some of the use cases listed above, go ahead and proceed with a tri-band wireless router. It’s always nice to turn things up.