Noctua had a good offering for a CPU cooler when it debuted on the market in 2009, but in the intervening time, other manufacturers stepped in and, even though they were based on the Noctua design, they made improvements that allowed them to get ahead in the market. 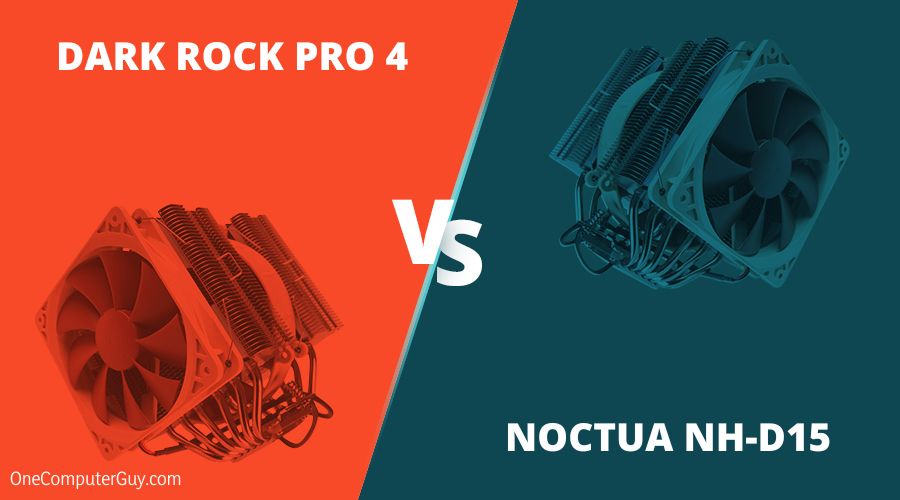 Is the new NH-D15 offering from Noctua a return to the top, or is the Be Quiet! Dark Rock Pro 4 the winner in this showdown? Read on to find out.

For those interested in the sleek and understated gaming PC look, the Dark Rock Pro 4 will not disappoint.

This flagship cooler from Be Quiet is all black, and it comes with two radiators, two fans (a 135mm in the middle and a 120mm one at the top), and delivers performance of 200 Watts of cooling power, making it an excellent and quiet CPU cooler, which is something we would hope for from a manufacturer who call themselves “Be Quiet!”

That said, there really aren’t any poorly performing coolers on the market anymore. For every segment and budget, you can find something you need. With different price points and cooling capabilities, everyone has a certain comfort zone and there is a product available to meet that need.

As a result of this market spread, most of the coolers available are all adequate at the very least. There are always exceptions when it comes to computer parts, and there are always a handful of manufacturers who make it their objective to cater to the high-end market of enthusiasts and pro users who are willing to pay more for the branding on a piece of equipment than the engineering that went into it.

If you want premium performance without the premium price tag, then make a stop over at Be Quiet! Because they check off the boxes that you want with a CPU cooler. The Dark Rock 4 and Dark Rock Pro 4 replace the model 3 released a few years ago. In contrast to the model 3, both versions of the model 4 have an improved mounting system making both model 4’s easier to assemble and install.

The Be Quiet! Dark Rock Pro 4 solutions have dual fans which are set up in a push-pull configuration, so you will see a second SilentWings 3 (120 mm) fan at the outside. The Dark Rock Pro 4 has copper pipes that go up into the spreader for dissipating heat. The Dark Rock Pro 4 height is of some concern to consumers when it comes to fitting everything on the motherboard and in the case at the same time.

The height of the cooler is 168mm (which is a little over 6.6 inches for those of you using freedom units) and the fan clips allow you to adjust the clearance over the motherboard so that you can still access your DIMM slots.

The Dark Rock Pro 4 cooler can be lifted to accommodate RAM sticks that are up to 44mm in height. Unfortunately, due to the configuration of the mounting brackets, the cooler can’t go any higher than that, but since most memory is smaller you shouldn’t have any problems getting the RAM you want to fit underneath the cooler when you install it.

The cooler is powder coated in a completely dark theme, which looks pretty nice, to be honest. Unfortunately, because this black finish has gone on like paint instead of being anodized to the metal, it is more prone to scraping off and causing unsightly silver blemishes.

You even have to be careful with the screwdriver and the mounting brackets. If scuffs and scrapes happen, use the best-kept secret of manufacturers who work with black-coated components: a black marker.

The noise level of the Dark Rock Pro 4 is what really sets it apart, though. Even under heavy load and having the fans spin upward of 500 RPM, the fans didn’t breach the 30 dB threshold. In fact, it takes using almost all of the 12V power the cooler is capable of making the fans anything other than quiet.

For reference, a quiet conversation is 40 dB, a rural area is 30 dB, and a whisper or rustling leaves is 20 dB, meaning that you’re more likely to hear the case fans, the GPU, or the power supply than you are to hear the Dark Rock Pro 4 during the normal use of your computer.

The year is 2009. The American economy is in a downturn, and Noctua is the first CPU cooler manufacturer to introduce a dual-tower heat sink cooled by a pair of fans which brings a significant improvement to cooling as well as a large footprint inside the computer case.

In the last decade, other manufacturers have been following that example ever since. Everyone and their brother has come up with some version of the original Noctua design.

In some cases, these competitors made a direct copy from the OEM with some RGB added in for flavor (really, does everything on the motherboard in this day and age need the extra complexity and power draw of putting lights on it?) but sometimes they managed to come up with a design that was all its own while frequently referencing the Noctua source material.

There is no question that the Noctua NH-D14 was a definitive trend setter for the heatsink world, and the first out the gate in the game of making large, dual tower coolers. As the years went on, the Noctua coolers lost their top spot to other, better performing models that copied their design and took over portions of the market.

With the NH-D15, Noctua fixed some of the problems that drove away consumers with the original NH-D14. For example, the original cooler was not adjustable, and had no clearance for taller memory. Users had to make a choice, then, between having the memory that they wanted or having the Noctua CPU cooler. The new model has adjustable brackets that can accommodate tall RAM sticks that you will most likely be putting in the performance gaming PC.

The memory clearance was the major issue with the Noctua cooler, as the rest of the setup was solidly designed and built. The mounting kit itself was good then and is still one of the best mounting kits on the market.

Noctua have listened to their customers, and kept all the things that worked well, and added a few new changes to not only take care of the issues we mentioned earlier, but with the advent of socket 2011, the cooler is also fully ready to accommodate those memory configurations as well.

This model is designated as D15 because in addition to being an upgrade over the D14, the old 140mm fans were replaced with 150mm fans on this cooler.

The Noctua fans stay quieter than the Dark Rock Pro 4, and because a whispered conversation is considered to by 20 dB, unless you are under full load, the cooler could reasonably be called “whisper quiet” without too much exaggeration.

The Noctua also outperforms the Dark Rock Pro 4 when it comes to cooling as well. Side by side, the idle temperatures are within one degree Celsius of one another: a difference between 26 and 27 degrees (78.8 degrees Fahrenheit vs 80.6 degrees Fahrenheit).

ith the same test processor under load, however, the Noctua pulls the victory, keeping the CPU six degrees Celsisus cooler, a difference between 59 and 65 degrees (138.2 degrees Fahrenheit vs 149 degrees Fahrenheit).

The clear winner in terms of performance is the Noctua NH-D15 CPU cooler. From the manufacturer that made large, fan based CPU coolers a key player in the market, it’s no surprise that when they released a new model it was ahead of the competition.

The Noctua stays quieter than the Dark Rock Pro 4, it delivers better cooling performance, and it is more adjustable than the Be Quiet! cooler to accommodate taller sticks of RAM in the DIMM slots that are close to the CPU socket on the motherboard.

If you need the best cooler you can get for your CPU, go with the Noctua NH-D15.