Many gamers are finding that PS4 thermal paste replacement is a product they are having to look for sooner than they think, especially if they overclock regularly.

The heat generated within a PS4 requires thermal paste replacement every so often and there are some thermal pastes that are better for PS4 heatsinks than others.

What Is The Best Thermal Paste For PS4?

However, there is plenty more that goes into as well. Some of them have metals, others have zinc, and some will have “special” ingredients to make them shine.

Thermal paste is a high-margin product within technology, so there are plenty of products out there to choose from, even if they aren’t all that great. Every company makes their own compositions, but there are some typical ingredients that you can expect.

There are some limits, however. Thermal paste tends to have an upper temperature limit of 150°C, though some pastes have claimed they can withstand up to 300°C or more.

So what are the best thermal pastes for PS4? Here are some of our top choices: 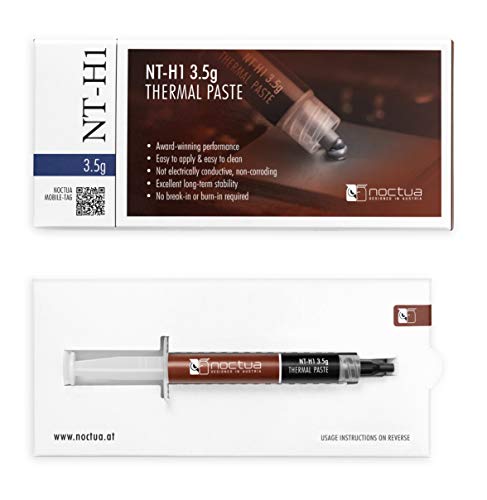 Noctua’s NT-H1 is a great thermal compound paste for PS4 because it is a thermal compound that has received over 150 awards and recommendations all across the internet. It is one of the most widely used products as well. Its performance is known for ease of use and long term stability, lasting far longer than other types of thermal paste. This is the best option for people who generate quite a bit of heat when they game, especially those who overclock. Another reason why this one is used is because it helps with soundproofing the system and keeping it silent.

Noctua’s NT-H1 has been used on all of Noctua’s premium CPU coolers, and those tend to have far better performance than other options. If you are an overclocker, you will eventually have to clean the thermal paste and reapply, and that’s another reason to choose this one, as it is one of the easiest thermal compounds to clean. All you need to do is wipe down the CPU and heatsink with a dry tissue or a paper towel, then use a moist towel, and everything is gone. You don’t even need to use alcohol!

Still, this thermal paste is stable over time, even after you have used it and subjected it to heat for a long time. You can store the tube for at least three years as long as it stays at room temperature. It won’t bleed, dry-out, or become less effective. It will last for up to 5 years (or more, depending on what you do) on your PS4.

Another highlight of this thermal paste for PS4 is that it is not electrically conductive and won’t corrode. Some of the options (including on this list) are a bit risky to use and apply because they are corrosive or electrical conductivity. With NT-H1, there is no risk of short-circuiting. It is completely safe to use with almost all technology, no matter the material. It will even work with aluminum, copper, and nickel! 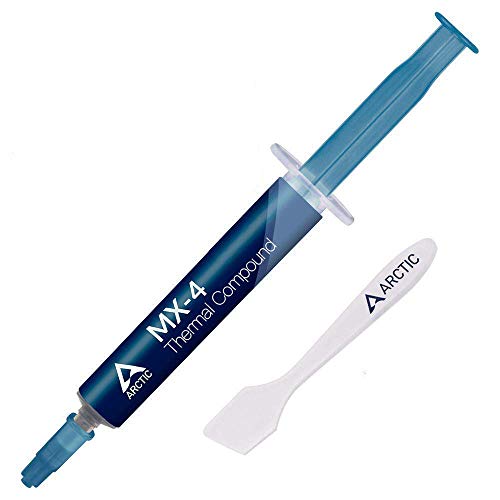 The ARCTIC MX-4 is a great thermal compound for all coolers and gaming setups. It is one of the easiest thermal pastes to apply, making it perfect for those who haven’t really tried to use thermal paste before. There are easy-to-use videos that you can find with this specific product online. The consistency lends itself to an even distribution as long as you work the bottle a little bit when you get it.

Performance-wise, the MX-4 is composed of carbon micro-particles, which will lengthen the amount of time between applications and helps to keep everything cool. It helps to ensure that the heat generated from the CPU and the GPU will quickly be dissipated, helping with overclocking and similar habits.

There are absolutely no metallic particles within the formula, so there isn’t any electrical conductivity. Unlike some of the other choices on this list, it can come into contact with silver and copper without resulting in any damage to the system.

As you won’t likely use all of the product in the tube, ARCTIC has perfected storage as well-the packaging is quite great. It is also made out of sustainable material, so you will feel like you are doing something good for the environment.

If this is your first time looking for thermal paste for PS4 Pro, then you might want to start with this one because of how easy it is to use. 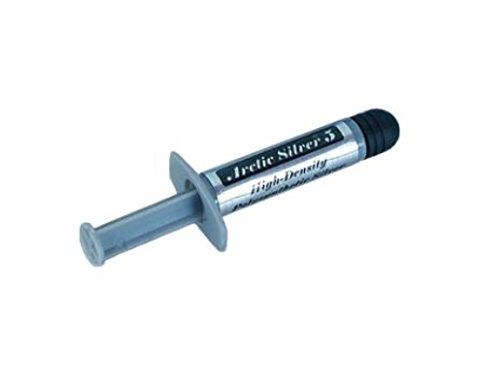 Arctic Silver 5 is another great thermal paste option for PS4 because it has over 88% thermally conductive filler by weight. It includes micronized silver, sub-micron zinc oxide, aluminum oxide and boron nitride particles, to help have the most impactful performance. These materials help to enhance thermal conductivity and reduce the internal temperature of your PlayStation 4. With one tube, you will get enough to cover at least 15 to 25 small CPU cores, 6 to 10 larger ones, or 2 to 5 heatsinks. They suggest that you use a layer of .003” thick.

This thermal paste has 3 to 12 degrees centigrade lower CPU full load core temperatures than standard thermal compounds or thermal pads in many trials. Some users have reported that it is a bit in the middle, with not many people getting to the 12 degrees.

Additionally, most tubes of Arctic Silver 5 come with a tool that will help you to successfully spread the thermal paste. This formula doesn’t contain any silicone at all. In fact, this is the most revolutionary mixture of materials on the list. They work together to form three layers of protection, helping to ensure the best connection between the heatsink and the CPU core on the PS4. It also allows for movement as it takes between 50 to 200 hours to get to its strongest form. 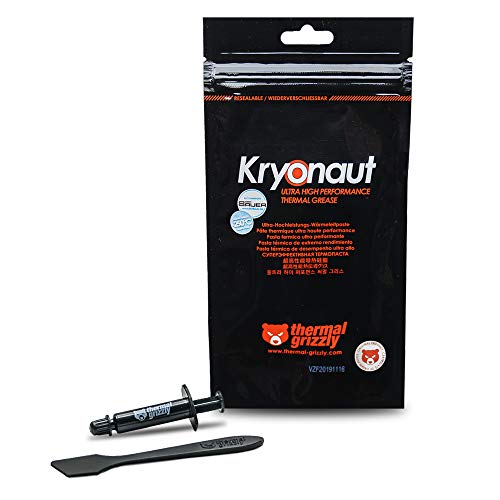 This thermal paste was specially developed over many years to meet the needs of gamers, particularly those who overclock. Kryonaut is used in many professional situations because it is ranked among the top for cooling systems. As such, the price tends to be a little higher than some of the others on the list.

It is excellent for thermal conductivity, doesn’t require any curing times, has long-term stability, and is easier to install. The only big problem is that it doesn’t store as well as some of the others on the list.

Kryonaut Thermal Paste has been developed to be used in situations where there are lower temperatures as well as high temperatures. It helps to keep everything within the computer or gaming system cooler.

This brand uses a specially developed carrier structure that does not begin any drying or hardening at all. This helps to ensure that the nano-aluminum and zinc oxide components contained in the paste combine optimally, thus optimally compensating for unevenness in the heat transfer medium and a heat sink with excellent thermal conductivity.

How To Apply Thermal Paste To A PS4?

If this is your first time applying thermal paste, you will want to take your time and be careful as you apply.

Your first step is going to be to remove the old thermal paste from the PS4 CPU surface. You will need to use 99% isopropyl alcohol to do this, but you will need to be careful. Pour some of the alcohol onto the part you are cleaning and allow it to sit for a few minutes. Then, come in with a clean piece of cloth (preferably one that doesn’t lose lint) and wipe it off.

There are a few different approaches to applying thermal paste to a PS4 CPU. The only thing you really need to be careful about is putting too much or too little thermal paste. You want to use the “pea” method to put the paste on. Find the middle of the CPU surface and put the pea right there. The paste will evenly spread as you put the heatsink back on: do not force it. Allow gravity to work.

You could also put a line or an X across the surface, however, these methods will often result in the use of more thermal paste than is necessary. If the thermal paste came with a specific tool, such as a brush or a spatula, so that you can evenly spread it. However, unless you have a liquid metal paste, you do not need to spread it yourself.

1. How Long Does Thermal Paste Last?

Thermal paste absolutely has a shelf life. Most manufacturers suggest keeping their tubes for up to three years if they aren’t opened. However, you won’t always know when your tube was produced, so it is often better to use it before then.

You want to purchase your thermal paste from a larger shop with more buyers to get a newer bottle that will last longer, especially if you want to buy in bulk.

Once you have opened your thermal paste, you want to store it in a cool, dark place and you will be able to store it for about a year.

2. Do You Really Need to Replace The PS4 Thermal Paste?

If you get a blue screen message while you are playing your PS4 and you keep getting messages that it is overheating, you may need to replace the thermal paste in order to keep playing. If you don’t, you could fry your system. The CPU will get hot over and over again until something breaks or fries. However, you need to know that replacing the thermal paste shouldn’t be the first thing you do when you get a notification.

You may want to just sit back and see if it was a one-time thing. Replacing your thermal paste requires you to take some time to carefully replace everything and ensure that you don’t cause any damage to the system.

In many cases, your thermal paste isn’t what is causing your heating problems. Before trying to replace your paste, you may want to clean the dust out of the air outlets, on the fan blades, or to move the console away from anything that could be blocking the vents.

3. Will Replacing The Thermal Paste Help?

Unless you have some uniquely specific needs, replacing the thermal paste isn’t always necessary.

Liquid Metal vs. Conventional Thermal Paste For The PS4

In general, we suggest that you try to find something that will work well and you should just read the reviews. If you aren’t steady with your hands, or you haven’t replaced thermal paste before, maybe a liquid metal isn’t the best option for you.

Conclusion: What Is The Best Thermal Paste For PS4?

If you need to replace the thermal paste on your PS4 (or any of your technology), chances are that you already know about building a PC or at least about maintaining your PS4.

If you are looking for the best thermal paste for PS4, we suggest ARCTIC MX-4.

Shroud Gaming Setup: What You Need to Know