Until a few years ago, most of the CPUs on the market were single-core, but that isn’t so anymore. Now, builders and gamers are considering 6 core vs 8 core processors more. 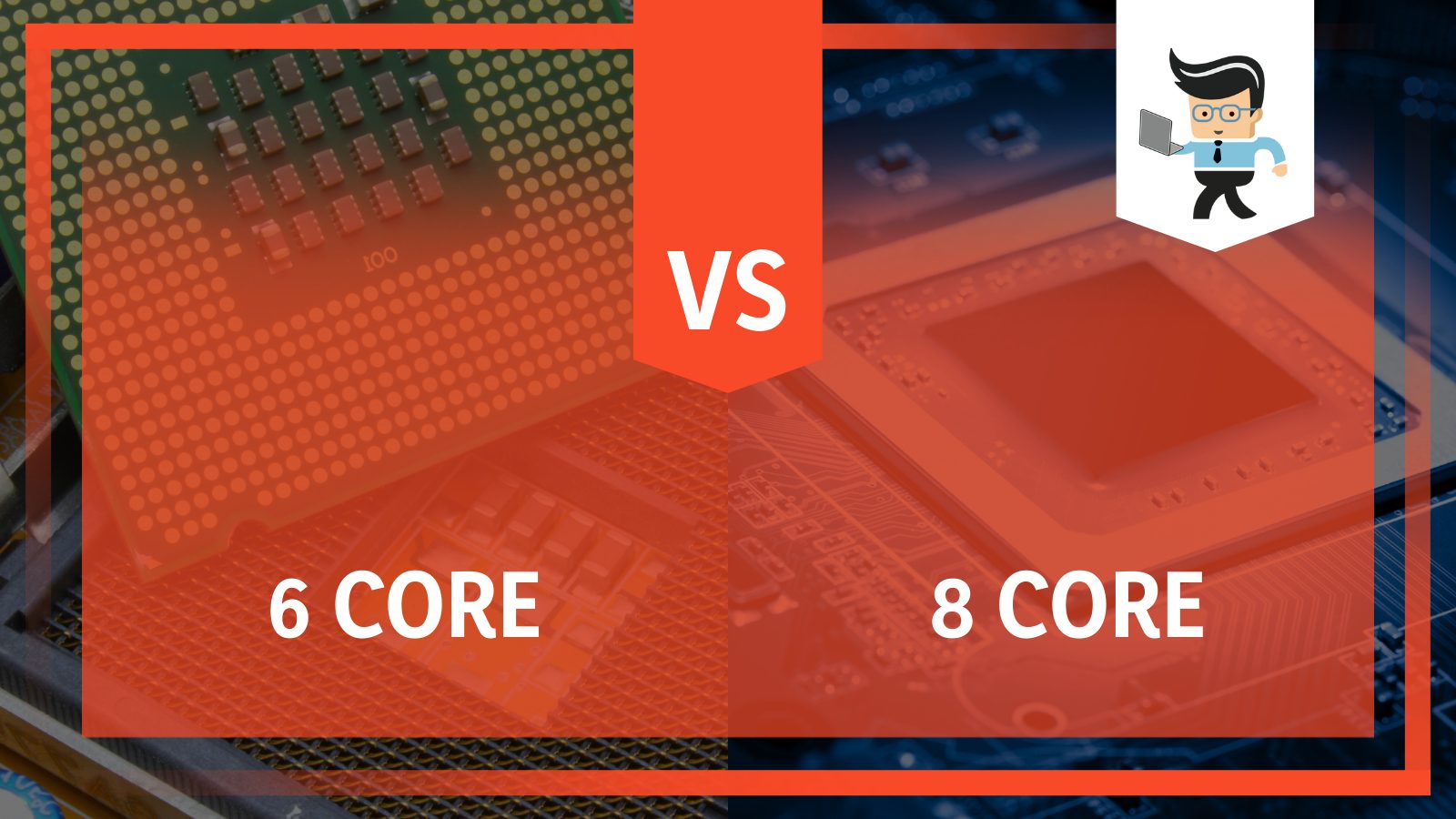 To begin with, processors have multiple cores to carry heavier clock speeds and allow for multiple apps to be open at the same time (think gaming and streaming, for example).

Multi-core processors are popular as the load became too much for a single processor and processors themselves couldn’t be updated due to size and tech limits. Manufacturers have shifted to replicating the processing units and creating multiple cores to help programs run faster.

While there are much larger cores available, most people choose between a 6 core processor and an 8 core processor for gaming, heavy workloads, and more because they are the most readily available.

As they serve almost the same purpose, are there significant differences between 8 core and 6 core processors? Read on to find out.

6 Cores vs 8 Cores: The Battle

Both 6 cores and 8 cores processors are made for gaming and heavy workload processes. Our experts have listed their similarities and differences below.

Six-core CPUs (also known as hexa-core processors) are the choice processors for most work environments because they have that perfect balance between price and performance. They are sufficient in most buildings unless someone is going to be editing photos or videos or working with architecture software, for example. 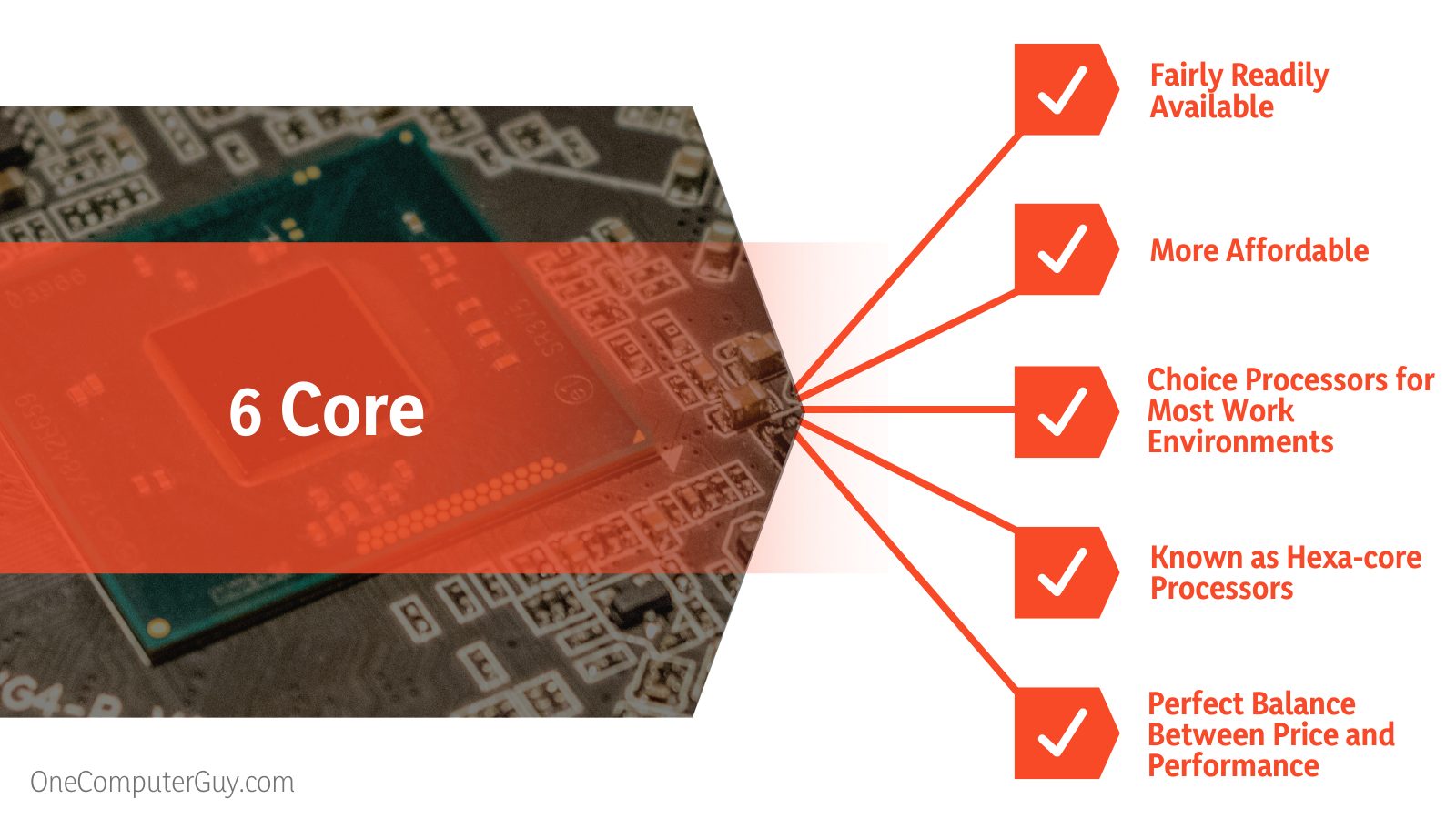 They can be used for full-stack web development. They can even be used for CPU-intensive games, though as heavier games come out, there will be some limitations.

Six-core CPUs are available fairly readily on almost all platforms and are used widely by competitive gamers. Users who need multithreading should aim to use a 6 core CPU, but you don’t have to use it to get all of the benefits. You just need to ensure that your processor can handle what you want to do.

Most games won’t depend as much on multithreading anymore, so that isn’t something you need to fixate on as you build your rig.

Eight-core CPUs (also known as octa-core processors) are the chosen processors for gamers, developers, designers, and other work environments that require powerful machines. They are some of the more expensive models, but they make work a lot easier for people who have to process a lot at the same time, like architects, editors, and graphic designers. They can be used by anyone, but most work environments will think they’re overkill.

Eight-core computers are available for purchase already put together and ready to go, or you can buy them individually to build your own rig. You just need to make sure that the rest of the parts in the computer can match and live up to the speed and bandwidth. This makes building a computer a bit harder with 8 cores, but certainly not impossible.

Moving into the future, most computers will have 8 cores standard and those who need more will have higher versions.

What Is the Difference Between 8 Core and 6 Core?

The main difference between 6 core and 8 core is, with an 8 core CPU you can do multiple things at the same time and have a smoother performance compared to 6 core. 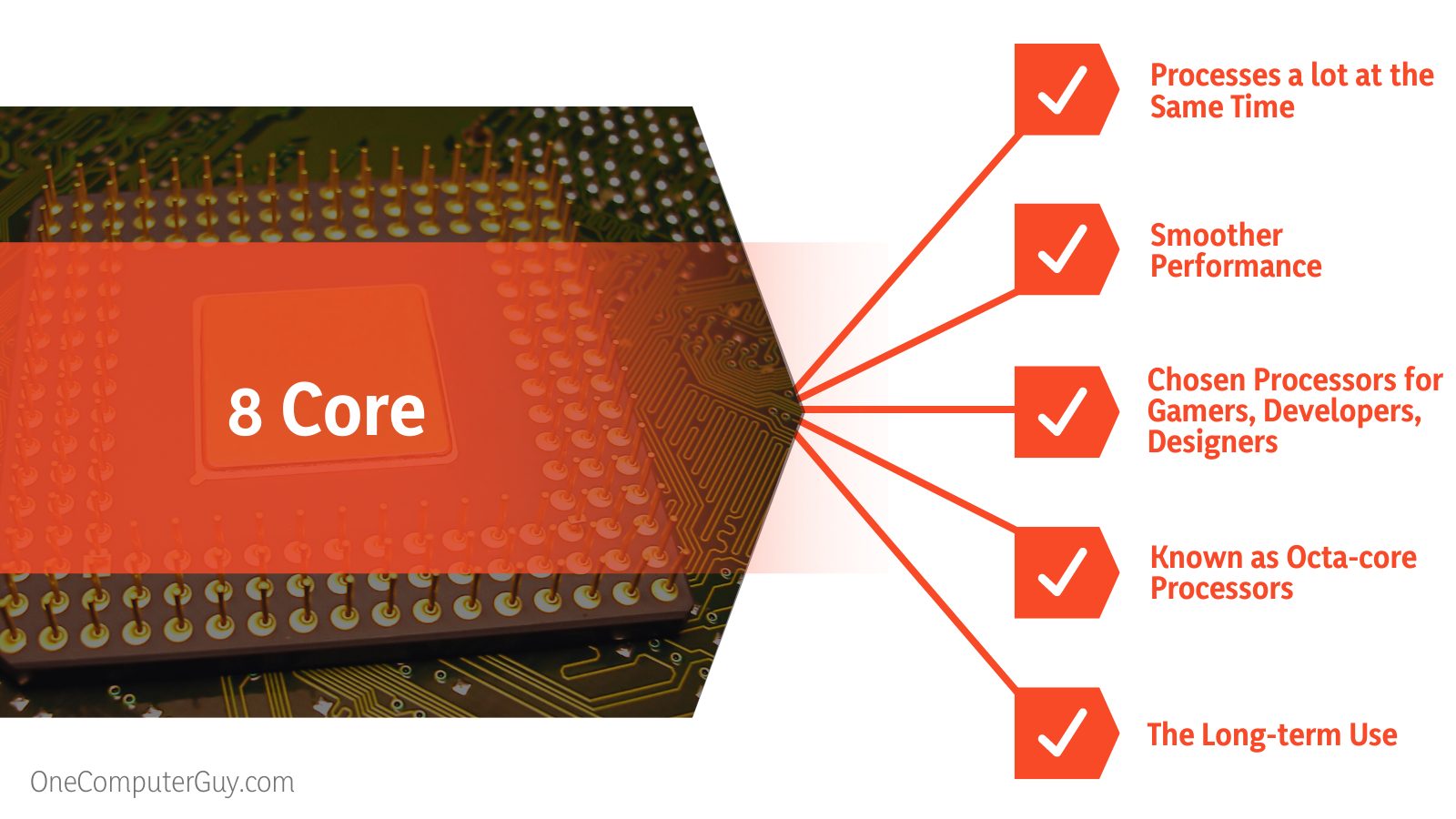 The number of cores indicates just how many tasks a CPU can do at the same time. This doesn’t necessarily mean that an 8 core CPU can handle eight tasks, but rather that you can do multiple things at the same time. The more cores you have, the smoother the performance of your computer is going to be.

When comparing 6 cores and 8 cores, you should also consider the long-term use. Games are only getting more complex these days and soon enough they will need more cores to give you the high performance that you need. You also need to think about your GPU as well as the CPU.

Are Your Cores Physical or Logical?

You really need to look at the overall picture to determine whether or not you are going to have enough cores for your build.

You would want to check:

With logical or physical cores, there really isn’t a large difference in performance. There may be a smaller gap in some games, but that’s rare and only in games that have a ton of action and graphics.

6 Core vs 8 Core for Gaming: Which One Is More Suitable?

When computers were first built, there was only one core and this led to issues with gaming. As gaming became more popular and technology got better, there were computers with 4 cores, 6 cores, and 8 cores. A higher core count means that a rig can do more.

Before 2008 or so, having a CPU with a higher core didn’t mean much because games weren’t developed to take advantage of multiple CPUs. Now that has changed and there is a pretty significant difference between having 6 cores and having 8 cores. As this change has largely impacted games, developers started to make games that take advantage of higher core counts as well.

Single-core performance is important for gaming because you need to break down the individual cores and see how they function. However, in general, the more cores you have, the better off you will be.

If you are a serious gamer who is on a budget, then using 6 cores is going to be plenty. In most situations, you won’t use all of the cores anyway. For gamers that stream, however, an 8 core CPU can significantly improve the end results of your build.

Each game will interact differently with the cores. Not all games are going to benefit from having more cores. However, no games will encounter any issues because of too much core space (though some games will have issues if there is too little). If you really want to future-proof your rig, splurge and get more cores.

Currently, we have no way of knowing whether or not 6 cores will be enough into the future, but trends say probably not.

Core Bottlenecking Will Be an Issue With Both

The purpose of having more cores is to avoid bottlenecks. Unfortunately, there are always going to be issues with a bottleneck with certain activities. If your GPU isn’t working at maximum capacity because your CPU doesn’t have enough cores or is too slow, you are going to have a bottleneck. This can apply when you pair older parts with newer parts or a CPU and GPU that aren’t congruent. 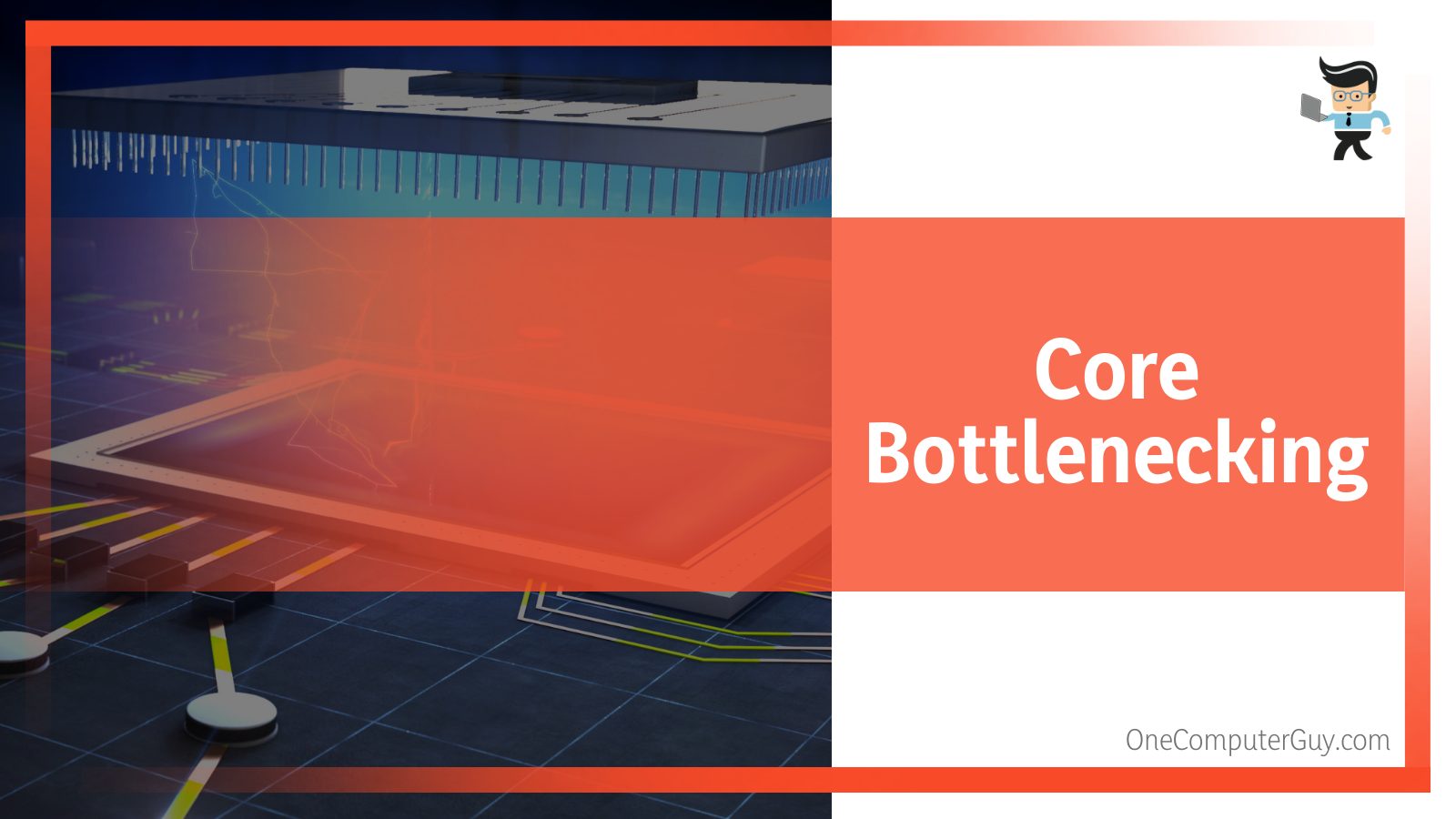 If your GPU isn’t working at the same speed as your CPU, you are going to have a bottleneck there. If your GPU is faster than your CPU, and you don’t have enough cores, your CPU will cause the bottleneck. Unless your CPU and GPU match, you won’t have any extra performance support and you will have spent way too much money on one aspect of your rig.

Unfortunately, there are some other unpredictable bottlenecks that exist. It is a battle that you will have to fight at every turn.

Conclusion: Which Processor Do We Recommend?

It is important to note that the core count of a processor depends on how many tasks it can process in parallel.

There are other factors that go into performance as well, and that doesn’t necessarily mean you can operate six or eight heavy tasks at the same time.

Instead, it refers to individual tasks and most applications (especially while gaming) request multiple independent tasks. Even with 8 cores, it is possible to overwhelm your CPU. As such, you need to be wary of temperatures and cooling.

Overall, you can never have too many cores, but you can have too few. We’d suggest getting 8 cores instead of 6 cores if you think you are going to need them, like when you are gaming or doing heavy processing tasks. If you will just be using your computer for general tasks like word processing, a 6 core will be enough.