What’s the difference between a micro USB vs micro HDMI? If you are shopping for computer cords or just looking through that box where you put all of them, you might realize that you have a lot of cords, and you don’t really know what they do. 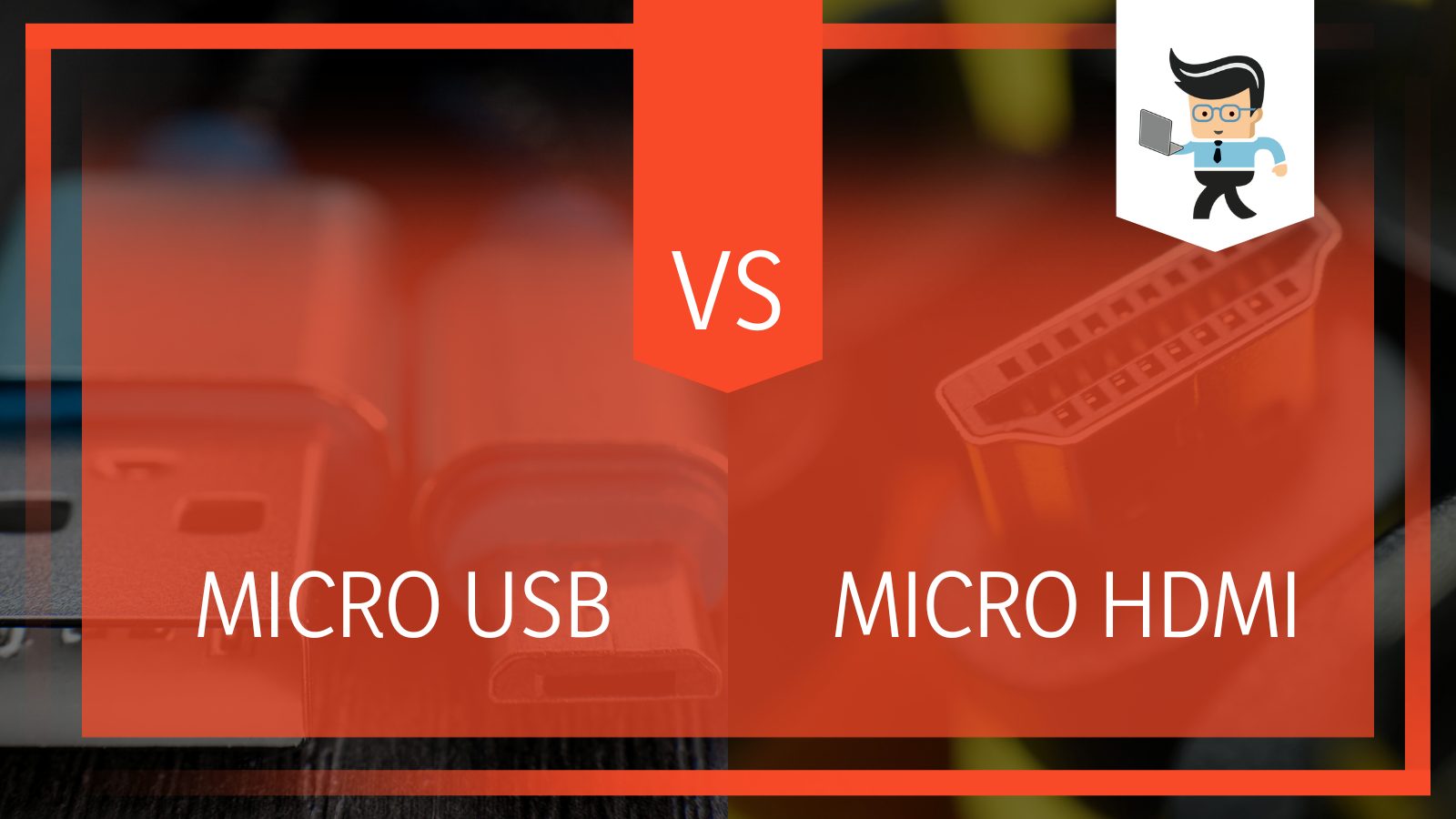 Just a few decades ago, there were many more cords that were individualized for specific tasks. Thankfully, we actually have fewer cords today than we did then, with the micro HDMI and micro USB taking over many tasks.

We use both of these cords to stream content and connect one device to another, in general. The micro USB has a few more functionalities that make it the kind of cord you always want to keep around. For more information about each of these cords, how they differ, and how they are the same, keep reading.

Micro HDMI: All You Need To Know

HDMI comes in a few different sizes, but the most common sizes are Micro and Standard Type-A.

Type-A is what you will use for most monitors, PCs, gaming consoles, entertainment players, cable boxes, and generalized TV usage.

These devices almost always come with an HDMI cord, or you can buy one at your local big box store for a low price.

– What Is the Difference Between Mini and Micro HDMI?

A mini HDMI is a Type-C that is designed to Type-A standards but is just smaller. It still has 19 tips, but the tips themselves are much smaller, coming in at 10.43mm wide and 2.42mm thick.

This cord is usually used with portable monitors, DSLR cameras, and other mid-sized devices. You may also be able to use this cord with tablets and phones.

A micro HDMI has 19 pins as well, making it easily compatible with most devices, but you will need to use an adaptor. It is extremely small, coming in at only 6.4mm wide and 2.8mm thick. It is some 72 percent smaller than the original HDMI.

We use micro HDMIs for smartphones, including the Droid X. Unfortunately, it looks like the trend is to actually move away from micro HDMIs and move all smartphones toward micro USBs. They are still necessary, however, because they offer better 4k playback. Action cameras still use this connection. 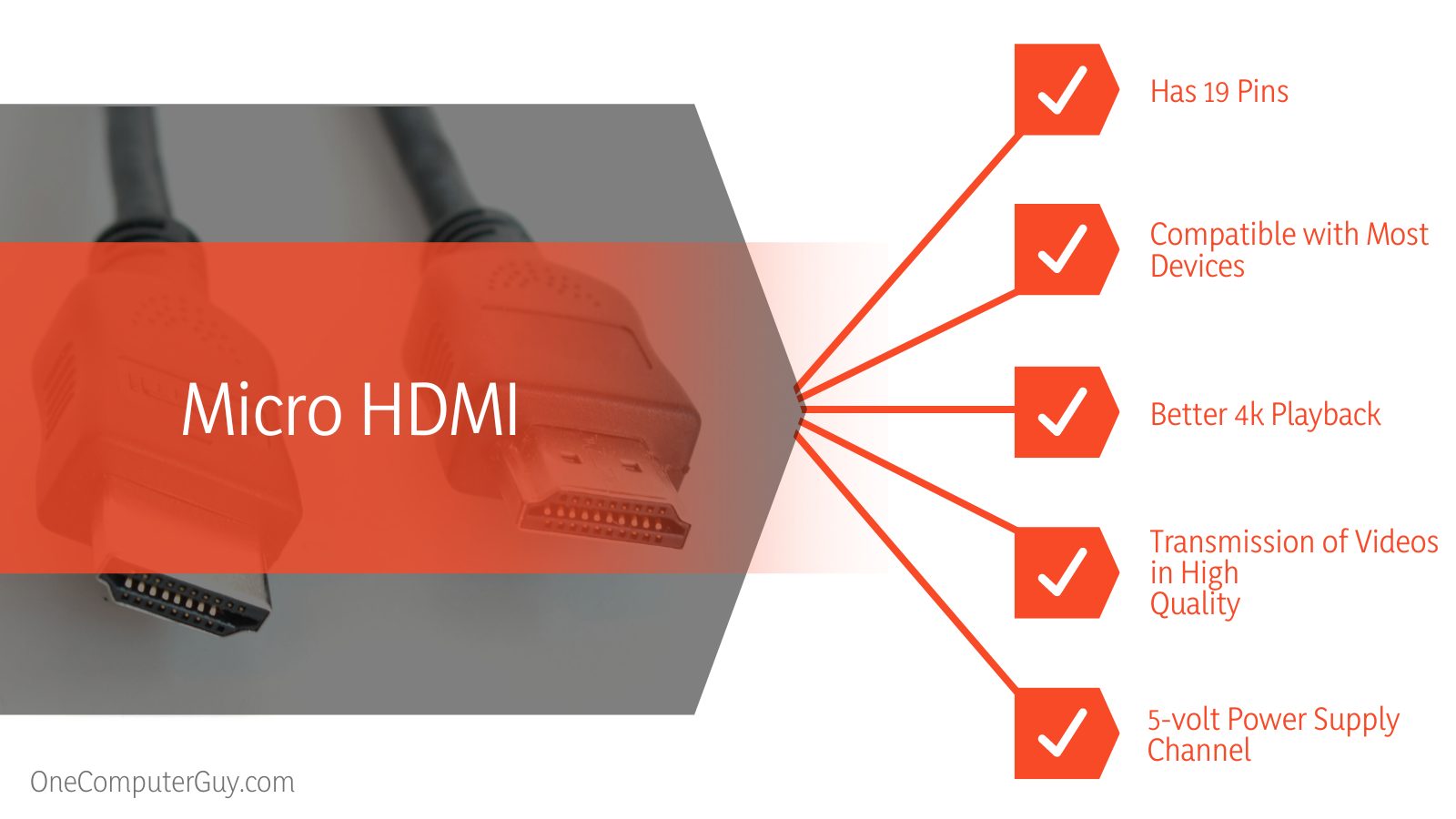 – Use Cases for HDMIs

No matter the size, these HDMI cords have two rows of pins with 19 pins in total.

That’s an important number because regardless of what HDMI cord you use, there will be 19 tips. These tips allow for the transmission of videos in high quality. Each channel gets three tips for the best possible image. The HDMI cord will also transmit audio and something called “clock channels.” These channels don’t have data, but they help to keep everything synchronized and working properly.

HDMI cords offer a few advantages over other formats. It has a 5-volt power supply channel to deliver power to some devices. It can track what and when devices turn off and on, and the swing-pin makes it a versatile cord. It can even transmit ethernet signals!

One channel on an HDMI cord is the CEC (Consumer Electronics Control) channel. This controls and programs devices when they connect. With that, you would want to ensure that all of your devices are compatible and offer CECs.

When choosing a micro USB cable, go for an HDMI 2.0 cable because it supports ARC and eARC, making it better for audio transmission. Don’t settle for anything else or older. These cords are going out of favor for many people. This is especially true for the older cords as, without recent technology, they really miss the mark.

Micro USB: All You Need To Know

The Micro USB is one of the most popular cords for people to have. It charges almost all non-Apple phones, most tablets, and other portable devices. The micro USB socket charges portable chargers, speakers, skincare devices, lights, and more. It also acts as a power supply for many of these same devices.

USB stands for Universal Serial Bus, and it was developed in the 1990s as a result of those multiple cords we mentioned above. The goal was to simplify the connections between computers and peripheral devices.

It became more popular as companies saw not only how versatile these cords are but how sturdy they are. These connectors are cheap to make, and the ports themselves are sturdy too.

Today, the USB standards that manufacturers have to follow are maintained by the USB Implementers Forum. They take their work extremely seriously, and manufacturers are more than willing to adhere because of how important these ports are. This strictness has made it possible to get USB devices that are affordable to the general public. 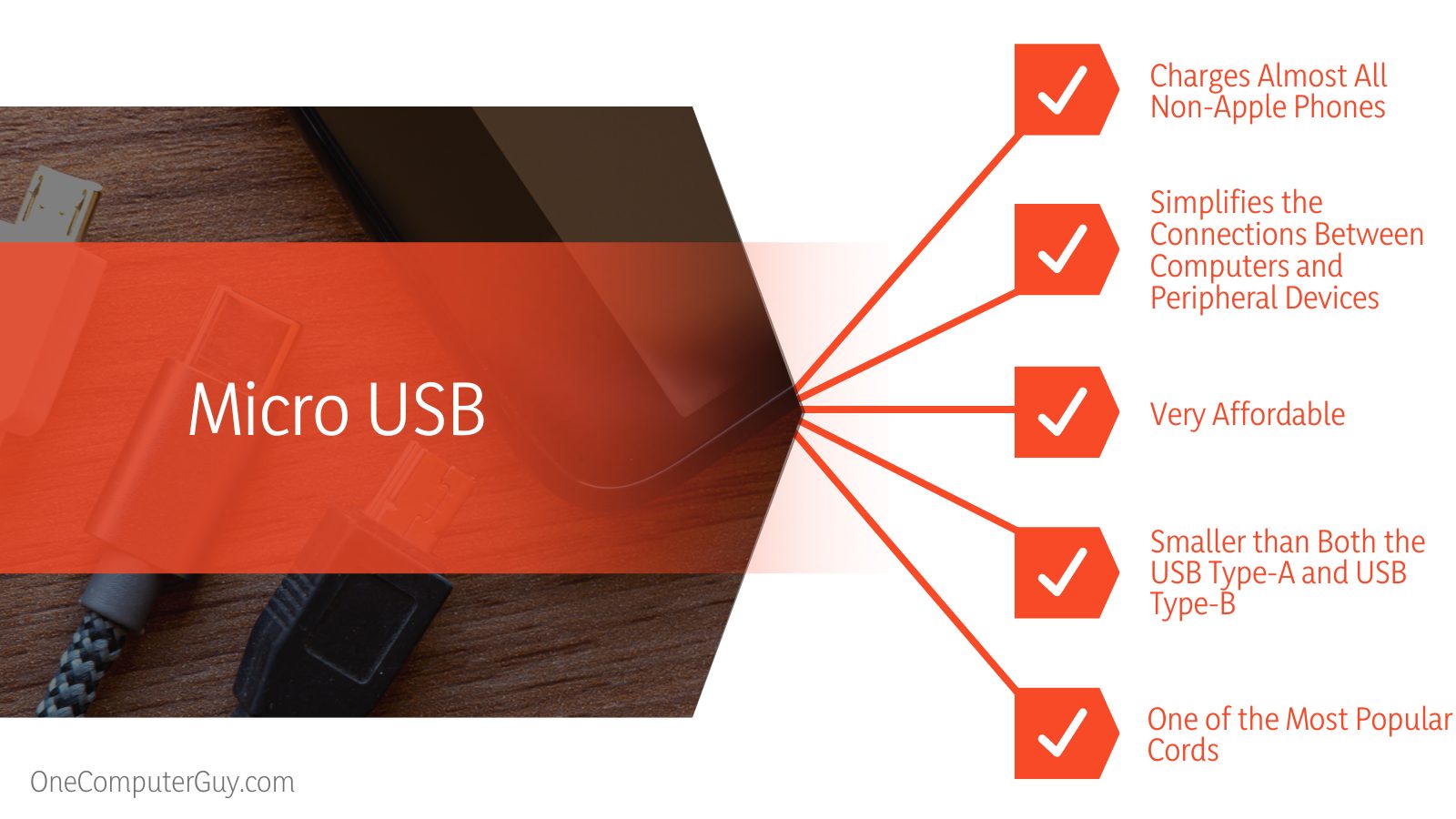 The micro USB is smaller than both the USB Type-A and USB Type-B. It is about half the thickness of a mini USB. Like the micro HDMI, it is slowly being phased out by other types.

Micro USB cables are still popular, even though there are more options out there. Some of the other USB connectors are:

The most common types of USBs, these connections are long, flat, and rectangular. They are easy to connect and disconnect. This type of connection is usually used for “downstream” connections where information only has to be sent one way, but that isn’t always the case.

This type of connection is used on USB peripheral devices. The interface looks similar to the USB A-Type but is more square-shaped. These connections go “upstream” to the devices they are connected to.

The Micro-USB is on newer mobile devices, digital cameras, GPS units, and more. It has a high-speed transfer rate and features that can be used on the go. Unlike some of the other models on this list, it has a 5-pin design.

The USB mini-B corrected one of the most common complaints about the USB, which is that it is just too big. These cords aren’t as popular as they expected them to be, but it is used in certain on-the-go devices.

These ports were designed for on-the-go devices. It is easy to spot because the inside of it is gray, and it has a 5-pin device. Interestingly, these do not come in cable form.

The Micro USB A connector is a newer port and cord, designed to be physically smaller. It is used in smaller devices and is extremely high speed. The inside of these ports is white, making it more distinctive.

The most obvious difference is that the Micro USB and Micro HDMI are used at completely different times. You can use the Micro USB in many different situations and with many devices. It is as close to a “universal” port and cord as we will probably get within the tech world.

The Micro USB is one of the most universally used ports across all pieces of technology. Even though it is small and maybe not used as much as it used to be, there are still adaptors available to make it easy to use.

Both of these ports do what they need to do. The micro HDMI does just as good of a job as the bigger ones, though it isn’t usually used in instances where it can shine all that much.

Micro USBs haven’t always been known to last a long time because the equipment they are built into is cheap. HDMI ports and cords have less of a reputation for breaking. 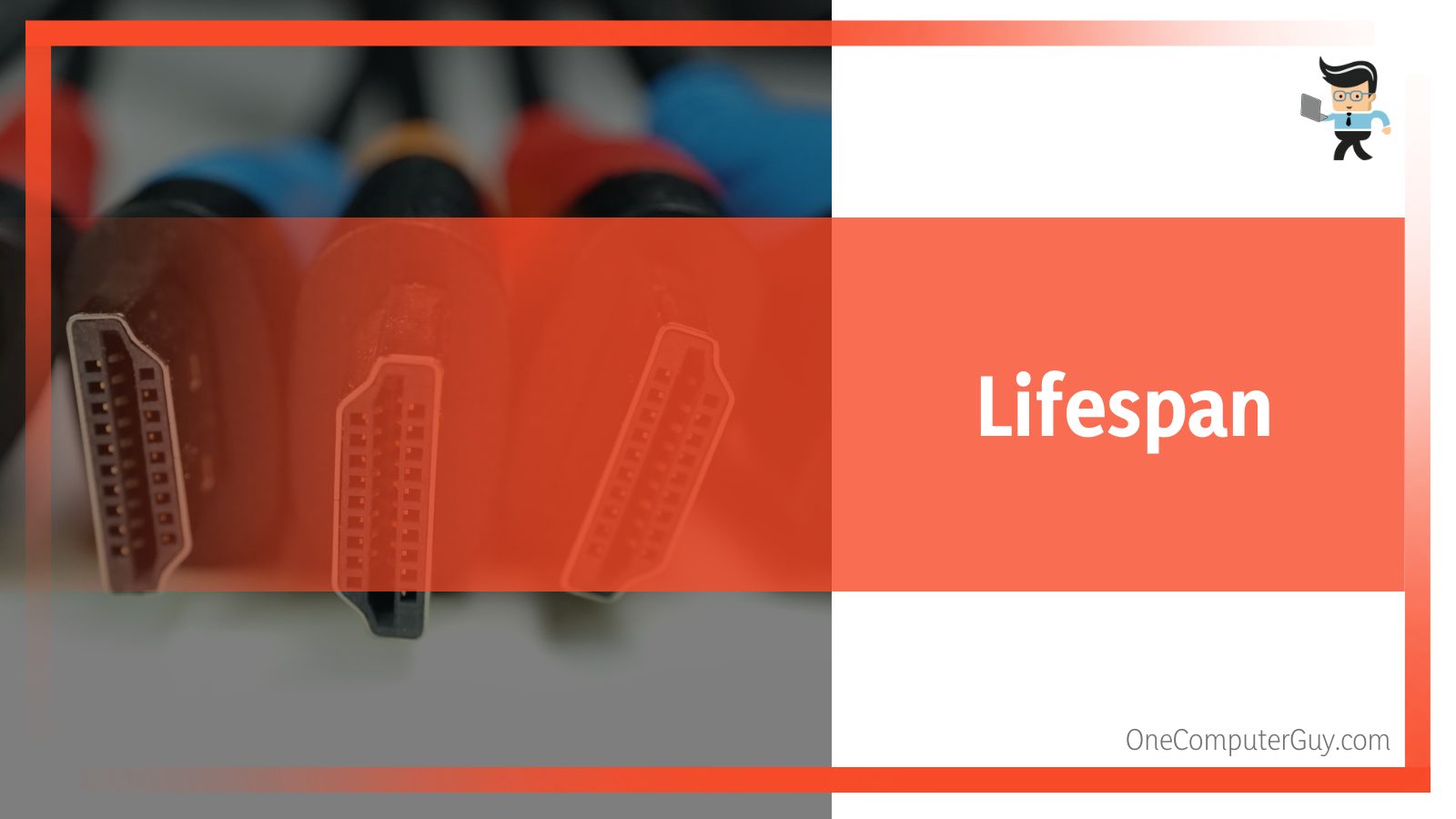 The only thing that you can compare about these two ports is that they are both smaller versions of bigger ones. They are great for smaller, portable devices and work just as well, in most cases, as their bigger counterparts.

Still, the Micro USB seems to be around for a long time, whereas the Micro HDMI doesn’t have much of a future.