When building your PC setup, the debate of 120mm vs 140mm fans is contentious. There are many people who fall on both sides of the argument, and it can be difficult to give a “one size fits all” answer. 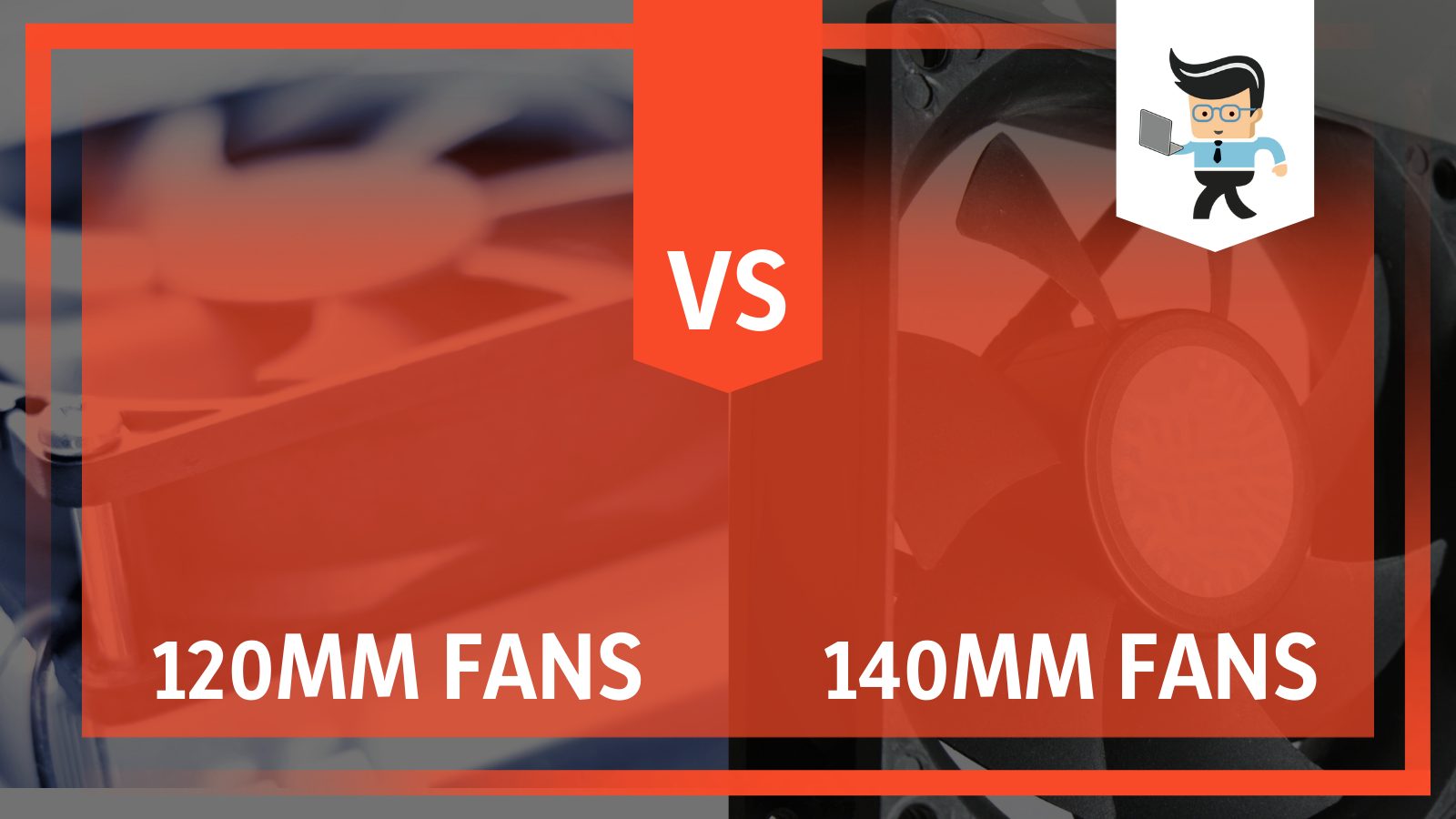 Case cooling fans are one of the most important parts of your build, so you need to get it right.

In this guide, we will arm you with all the information you need to get it right the first time. We will look at the power, noise, performance, size, availability, and price of each type of fan.

What You Need To Know About 120mm Fans

Historically, 120mm fans are the most widely available fans on the market. Many bigger size fans have come out, but this is the size used in most laptop and computer builds even today. This is because a 120mm intake fan can be used to cool the inside of cases for regular computer usage, and a powerful 120mm fan is enough for many gamers.

A 120mm mounting has a smaller overall size than most other fans, making it better for low-profile cases and builds where other parts are smaller, though it lacks some cooling options.

The average 120mm fan dimensions are 120mm x 120mm x 25mm, though some fans differ ever so slightly, especially if they have extra RGB lighting.

What You Need To Know About 140mm Fans

More and more people are flocking to get 140mm fans, even though they are larger. The 140mm computer fan is popular amongst gamers and professionals who use heavy applications, such as architects and editors.

There is a lot of talk about 140mm static pressure fans and the ratings they get. While it doesn’t matter as much with 120mm fans, you should pay attention to this rating as they seem to be all over the place. These types of fans should only be used in full cases because they are large and have been known to encroach on the space reserved for other fans.

The average 140mm fan dimensions are 140mm x 140mm x 25mm, though there are some fans that differ ever so slightly, especially if they have extra RGB lighting. Some 140mm fans have a lot of extra lighting, which makes them bigger and heavier.

What Does Size Have To Do With It?

The first thing you should think about when buying a fan for your build is your case size. The fan will have to fit into the case. Most modern cases use 80mm, 120mm, or 140mm fans.

However, some cases can take up to 200mm, and some can fit only 40mm. Your case should come with a guide that recommends the right size for you, or you can measure the size of the fan from the mounting holes.

You will also need to think about whether you will be mounting the fan vertically or horizontally. Vertically mounted fans are the most common option, but many newer cases and those designed for gaming allow for horizontal mounting.

While this won’t matter in the long run, it can impact the type of bearing you use. 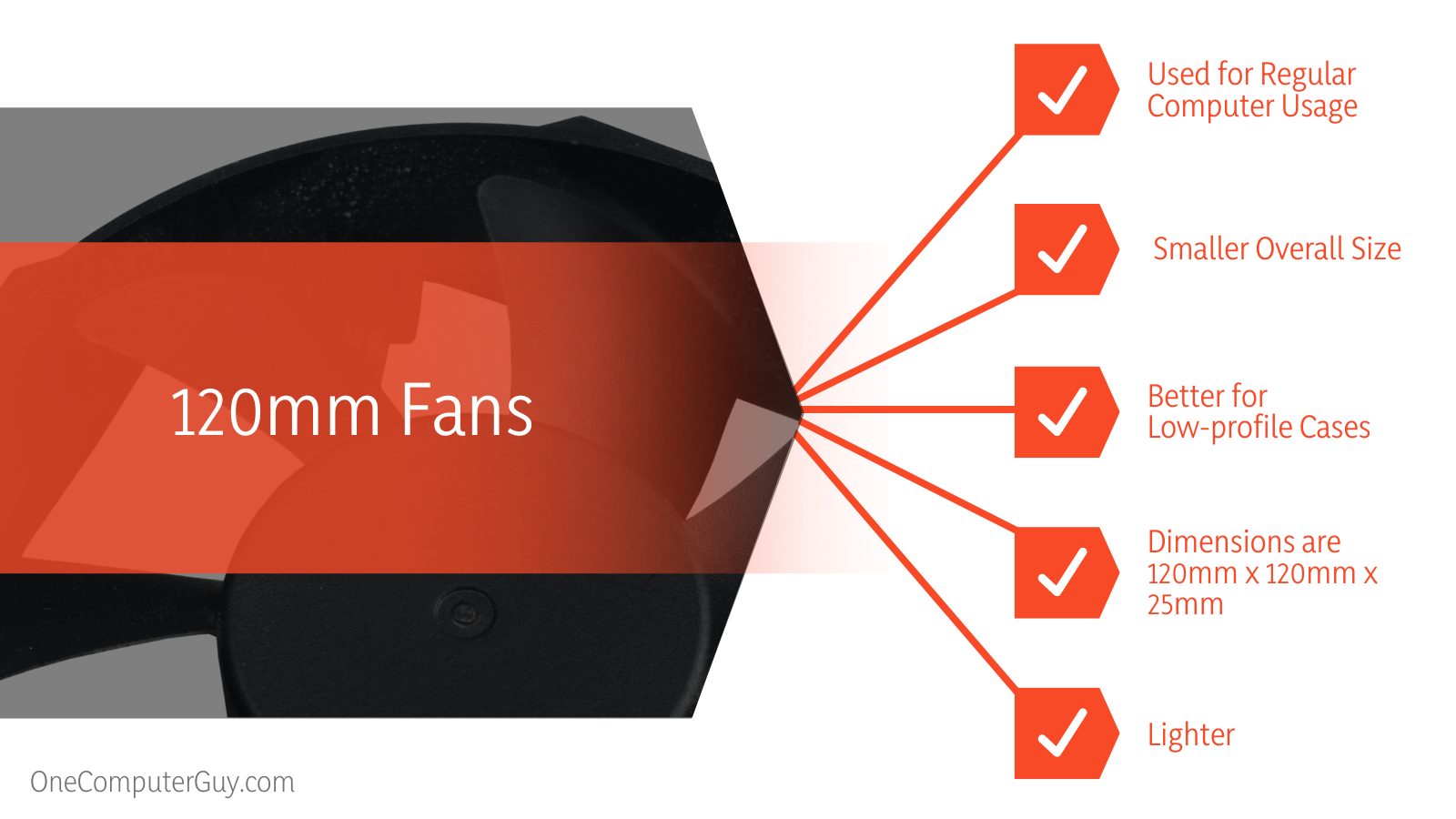 The main difference between 120mm and 140mm Fans is, 140mm fans show better performance, cooling and airflow, while 120mm is lighter.

These are the most important things to consider when comparing 120mm and 140mm fans.

The main point of any fan is to provide cooling to the entire system. To determine whether or not a fan will adequately cool a system, we need to look at the CFM and the RPM.

CFM stands for cubic feet per minute, which is the air that a fan can move per minute. It is one of the most important specs to look for when you compare fans. Most 140mm fans have longer blades and therefore have a higher CFM rating.

Now, the length of the blade isn’t the only thing you need to think about for cooling. The design of the blade, the material used, and the RPM all impact cooling as well.

RPM stands for rounds per minute, which is how many times the fan will spin around per minute. In general, 120mm fans will have more RPM than 140mm fans.

Another thing to think about is the static pressure rating the fan gets. This dictates how much of the airflow produced by the fans will actually penetrate the heatsinks and/or mesh enclosures and work to cool down your system.

This is a hard category to grade because fans have different uses depending on the cooling necessary. Sometimes a fan will have just to work to dissipate hot air, but usually, fans will also be fighting against hot air, dust, and other environmental contaminants.

This means that the static pressure rating is almost always in an ‘ideal situation where there isn’t any dust or debris within the system.

It’s hard to pick a winner in this category, and it usually comes down to some of the other things to think about on this list, but many people are worried about static pressure ratings.

If you are stuck between two fans and don’t know which to pick, go with the one that has a higher static pressure. In general, this will be a 140mm fan.

When building any type of PC, you need to think about noise. Fans are responsible for a lot of the noise you’ll hear coming from your computer. There are specific fans on the market that have been designed to operate almost silently (in particular, the Be Quiet! Fans are nearly silent).

Most fans made today are quiet, especially those that you purchase to put into PCs yourself. The loudest fans are those that come standard with prebuilt computers and PCs. The 140mm fans are quieter because they don’t have to move as much to get the same rate of cooling.

Of course, other things matter when determining noise, like speed, the type of environment you have, and even the brand. Interestingly enough, the blade size doesn’t matter when it comes to the noise, so you won’t really see an obvious winner there.

– Working Your Fan Into Your Build

Another thing to think about is your computer case’s dimensions and whether or not the fan will fit. However, you don’t have to base your case on the size of your fan. Just try to get the best case you can and adjust your fan options from there.

Clearly, the 140mm fans are larger, and your case may not be able to accommodate it, depending on the other items in your build. A 120mm fan will give you more versatility and options when you are building your rig.

One more thing to note is that you will have to think about the type of bearing you will use in your build. This can add weight and size to the overall fan, depending on how you mount it.

The way you connect your fan to your case will depend on the fan itself and your case, but most fans offer all three of these options.

– The Overall Value of the Fan

Finally, you want to think about the overall value of your fan and what it brings to your system. Most 140mm fans will cost more than 120mm, but that isn’t universally true. Higher-end 120mm fans are more expensive than lower and even middling 120mm fans.

The price difference between these two fans is often so negligible that it makes it worth it to save just a little more and get something more expensive. While we don’t think a fan is a place to “splurge” on your build, it is a good place to spend some extra money if you have it.

If you game or do things that generate a lot of heat within your build, you will need to utilize fewer 140mm fans than 120mm fans which could help keep your price down. 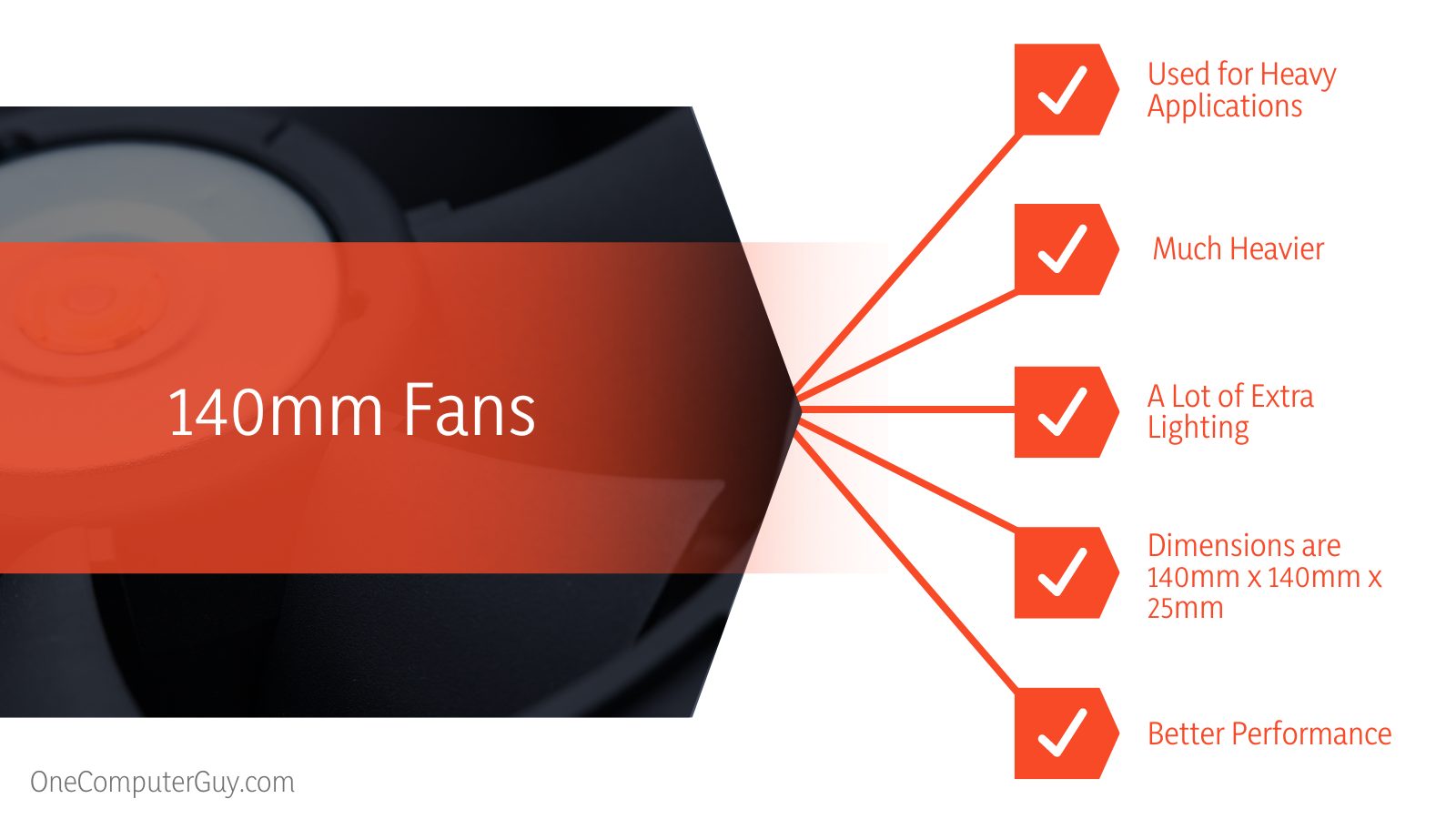 More people want lighting on their fans than ever before, and there’s a good reason for it. RGB lighting is beautiful and adds value to most computer builds. If you are looking to build within an open case, there are attractive options for RGB lighting on both 120mm and 140mm fans. The larger fan offers more options, but the price also increases more than with the 120mm fan.

One More Thing To Consider: DC vs PWM

If you are still stuck between a 120mm fan or a 140mm fan, and you need to make a final decision, you may want to look at the type of fan it is.

A DC fan (direct current) is controlled by 3-pin headers that attach to your motherboard.

In contrast, a PWM fan (pulse width modulation) has an additional pin that allows the final to signal to other components more easily.

There isn’t a huge difference between these types of fans, but a PWM tends to be a little quieter and more functional in the long run. If future-proofing your build is important to you, then getting a PWM fan is your best bet.

Overclocking: How Does It Factor In the Fan Size and Quality

One final thing you need to do is think about how much pressure you are going to be putting on your fan. Will you be overclocking regularly? If the answer is yes, you absolutely want to splurge on a good-quality 140mm fan if it fits into your case.

Overclocking can get extremely hot and will impact your performance. With a 140mm fan, you will be able to push your system even further than you normally would, without having to worry about blowing anything up.

Conclusion: Which Fan Size Is the Better Option

We have discussed the many things to consider when building your own PC, and fan size is one of the most important among them.

There is a lot to think about when it comes to your fan size, but in the end, we think that most people will benefit from a 140mm fan over a 120mm fan. Why is this?

That isn’t to say that 120mm fans are bad at all. The quality of the fan is going to be far more important than its size. You want to buy a high-quality fan and has a good reputation instead of just looking at the size of the fan alone. You will also have to find one that fits your budget, but performs well in all categories.