Knowing the difference between PCI express 2.0 vs. 3.0 will help you choose the ideal component for your PC. The differences between both go beyond their launch dates, speed, and other mere specifications. 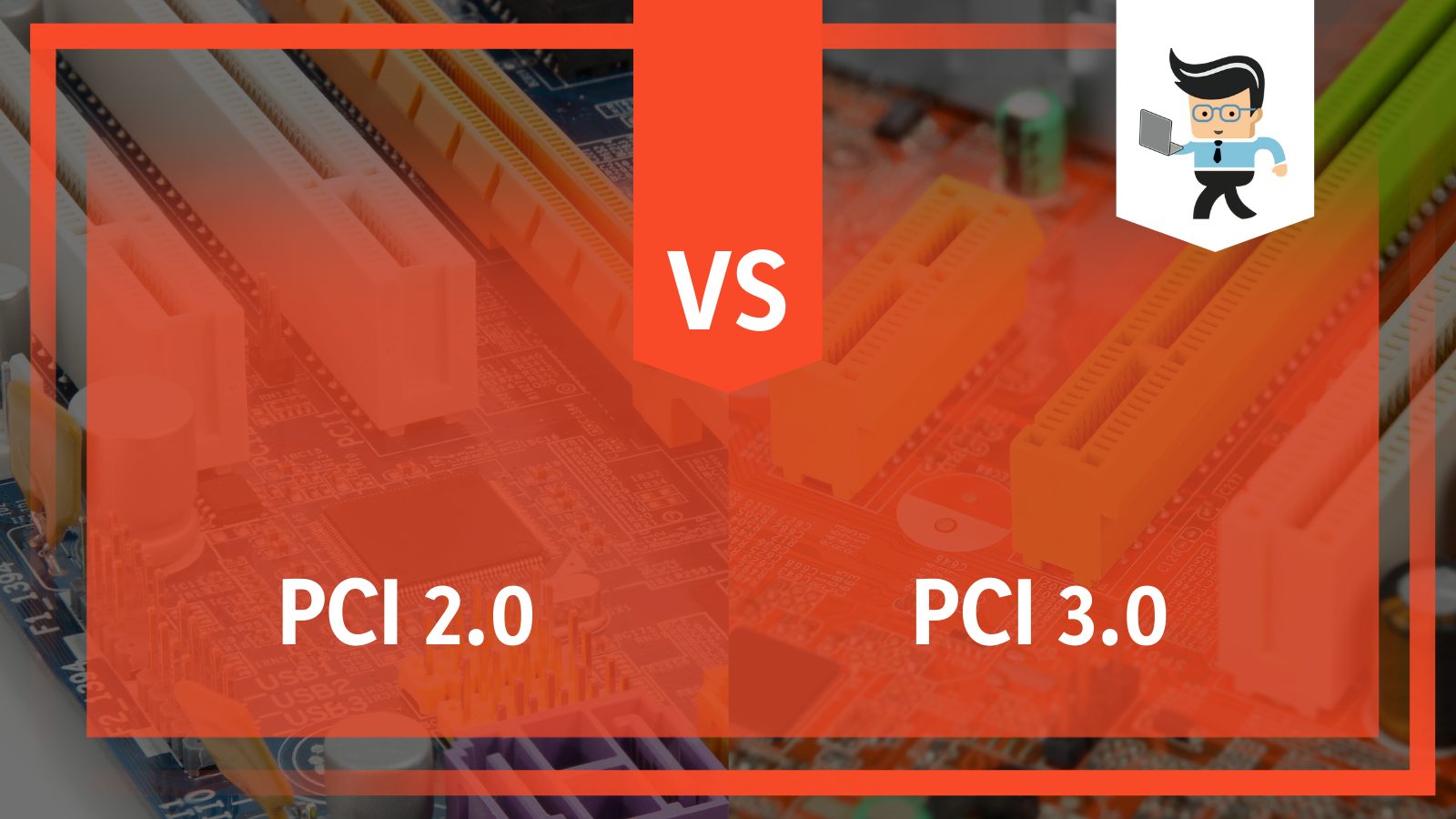 Our computing technicians have helped us understand what the differences between both are and we’ll be explaining everything in detail. Read on to learn more.

What Is PCI Express?

PCI Express, otherwise known as PCI-e and PCIe, stands for Peripheral Component Interconnect Express. The main goal of this technology is to provide the system peripherals in your computer with the ability to connect with each other. PCIe is a high serial bus standard designed to replace older versions, such as AGP, PCI, and PCI-X.

While computers tend to have a wide variety of connection standards, PCIe is considered to be the highest and most advanced option we currently know. Generally, the PCI Express is used to represent the expansion slots on your computer’s motherboard, be it a laptop or a PC. PCIe slots and cards come in different versions, including PCIe, PCIe 2.0, PCIe 3.0, PCIe 4.0, and PCIe 5.0.

– Understanding the Difference Between PCI 2.0 and 3.0

Additionally, PCI Express 2.0 is three years older than the 3.0 version. The PCIe 2.0 was introduced in 2007 while version 3.0 wasn’t launched until 2010. They both have the same physical look and slot shape, and their slots come in a variety of designs, including PCIe x1, x4, x8, and x16.

While PCIe 3.0 is an improved version, it’s not the latest model. It has been superseded by PCIe 4.0, which has then been overtaken by PCIe 5.0.

What Are PCIe Lanes?

To have a good grasp of the differences between PCI express 2.0 and PCI Express 3.0, you’ll need to have a proper understanding of what PCIe lanes are.

A PCIe lane makes it easy for users to connect an expansion card, such as a graphics card, with the computer’s CPU, allowing easy processing of the generated data. The number of PCIe lanes you can utilize for the installation of expansion cards is limited. And the total amount you get depends on your motherboard chipset and your processor model.

For instance, a normal PC can have about 20 PCIe lanes available to the user. About 16 of these 20 lanes are often utilized for the graphics card via the x16 slot while the remaining four lanes are occupied by other peripherals like the video capture card, network adapter, PCIe splitters, etc. Note that many new generation CPUs and motherboards offer more PCIe lanes over 20.

Now, due to the limited number of PCIe lanes, they tend to be very precious and you’ll need to make careful considerations, especially if you’re looking to add many devices to your system.

While it’s true that PCIe 3.0 has more bandwidth than PCIe 2.0, the overall bandwidth at which a device transfers data not only depends on the PCIe protocol on the motherboard but also depends on the number of PCIe lanes it occupies.

PCIe Versions and Their Corresponding Speeds

We’ve used the table below to summarize different PCIe versions and their speeds on different slot numbers.

– PCIe Versions and Speeds: The Specifics

Your device and PCIe slot version are two major factors contributing to the performance and overall size of your PC. For instance, a PCIe 3.0 card with an x8 slot will technically provide the same performance as a PCI express 2.0 x16 slot. This difference means that you’ll be saving up to eight of your PCIe lanes.

With this analysis in mind, it’s obvious how each consecutive upgrade in PCIe versions helps manufacturers make more high-performance devices that use fewer numbers of PCIe lanes.

With the above table in mind, we can see that the difference between PCIe 2.0 vs. 3.0 is not only limited to their speed but also related to how manufacturers shape the overall PC market.

So, with a better PCIe card, manufacturers can make smaller devices with excellent performances. Note that this factor doesn’t apply to only PCIe 2.0 vs. 3.0, but all PCIe generations’ upgrades.

Knowing the similarities between these two PCI express versions can provide you with a further understanding of how the PCIe interface works. This can also help you during your PC building process. 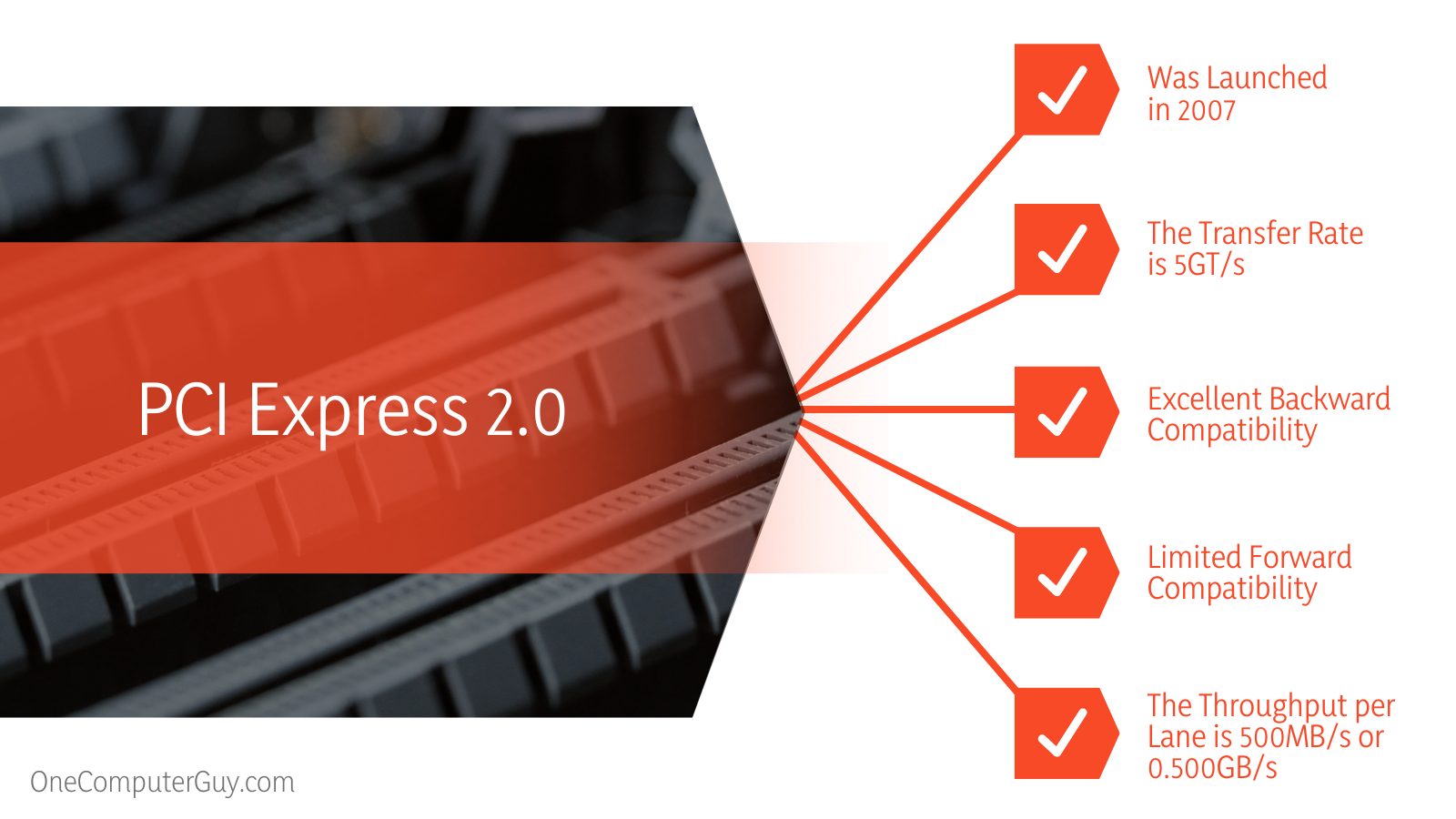 PCIe slots tend to have the same physical shape and size, no matter what the generation might be. So you’re bound to notice that the x1 and x16 slots of a PCI express 3.0 and 4.0 look the same.

While PCIe 2.0 and 3.0 are from two different generations, they are still part of the same standard. The connectors on both slots and expansion devices are physically similar.

This similarity allows users to install newer cards on older slots. So, if you have a motherboard with an older PCI express 2.0 slot but want to install a PCI express 3.0 card, you can do so with no installation problems.

The only con you’re likely to face is that the slot and the device itself are designed to work at the speed of the PCIe 2.0 card, which is the least powerful of the two.

Most times, expansion cards do not fully utilize the entire bandwidth of a PCIe slot. For instance, if a 1Gbps Ethernet card is connected to an x1 slot, it will theoretically provide a max transfer rate of 125MB/s. This speed is far lower than the bandwidth of a single PCI express 2.0 or 3.0 lane.

Therefore, a card like this won’t fully utilize a single lane, which brings us to the next important similarity: cross-compatibility.

Unfortunately, doing things this way isn’t the best as it’ll lead to bottlenecks or underutilization. While it’s true that PCIe devices and slots are cross-compatible, cross-compatibility doesn’t provide the best efficiency.

For instance, if you install a high-performance PCI express 3.0 x4 device, such as an M.2 SSD card, on a PCI express 2.0 x4 slot, the card will work because of the PCI express 2.0 compatibility with PCIe 3.0. But technically, you’ll get half the speed of what the card is designed with, thus bottlenecking the card’s performance.

Similarly, if you install a PCIe 2.0 x16 device on a PCI express 3.0 x16 slot, you may get the full potential of the PCIe 2.0 device, but will be underutilizing the capability of the PCIe 3.0 slot.

Full Comparison Between PCI Express 2.0 vs. 3.0

The most distinguishable difference between these two PCI express versions is their speeds or bandwidths. The 2.0 has a bandwidth of 0.50 GB/s while version 3.0 comes with 0.985 GB/s. 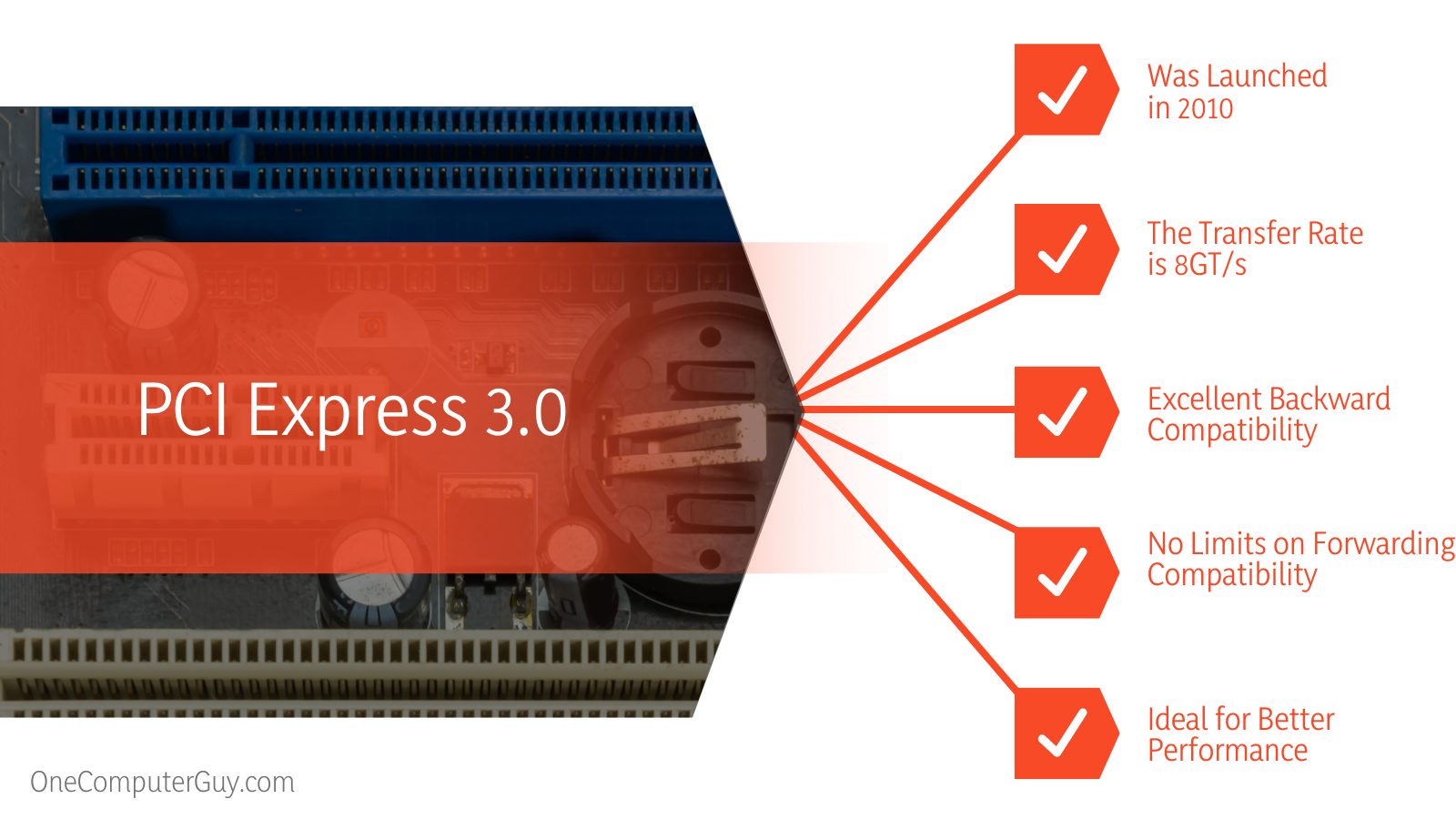 With this in mind, we can come to the conclusion that each new PCIe generation is designed to provide twice the bandwidth of the previous generation per lane.

While this factor isn’t directly related to the PCIe slot and bus on the motherboard, the PCIe version can have a direct effect on the expansion cards.

For example, a PCI express 3.0 M.2 NVMe SSD card is designed to take up 4 PCIe lanes. However, this expansion card can only be used by older generation SSDs, such as the Samsung 970 Evo which comes with a read speed of 3.5GB/s.

Compare that to a PCIe 4.0 card that can be installed on newer SSD generations like the Samsung 980 pro, which can provide speeds up to 7.0GB/s. This factor simply shows that the lower the PCIe generation, the lower the speeds the devices they are designed with will be able to provide.

Additionally, the lanes and size occupied by a device will change with each newer PCIe generation. For instance, an expansion card built to use PCIe 2.0 x16 lanes will provide the same performance as eight PCIe 3.0 lanes if it’s redesigned with 3.0 x8 connectors.

The way data is encoded on any device has an impact on the overall bandwidth the device produces. This logic also applies to PCIe protocol. PCI Express 2.0 utilizes an 8b/10b encoding system.

This means that for every 10 bits sent to the source destination, eight bits are categorized as data while the remaining two bits are considered as overhead. That’s about 20 percentages of the transmitted data having no impact, thus providing less efficiency.

On the other hand, PCIe 3.0 uses a 128b/130b encoding system. The overhead here is a lot smaller, thereby allowing the PCI Express 3.0 to achieve a higher bandwidth without the need to double the transfer rate.

PCI Express 2.0 offers a maximum transfer speed of 5.0 GT/s, also known as Giga Transfer per second. The PCI Express 3.0 supports up to 8.0GT/s.

Thanks to the fact that PCIe 3.0 can double the bandwidth of the PCIe 2.0 without doubling the transfer rate, it’s able to transfer more data per clock cycle compared to PCIe 2.0. This phenomenon results in a higher efficiency, which leads to better power consumption.

Both PCIe 3.0 and 2.0 are compatible with other PCIe generations, whether older or newer. However, for users who are looking to get the ideal performance from their computers over time while keeping up with the PCIe trends, it’s recommended that you choose a motherboard with PCIe 3.0 slots.

The first reason why you want to do this is that PCIe 3.0 is faster and it provides better transfer speeds than PCIe 2.0. Better transfer speeds mean that you’ll enjoy more reliable performance when using your computer for tasks like video rendering and high-quality gaming.

The second reason is that manufacturers churn out newer devices almost every day. If your PCIe motherboard is designed with PCIe 2.0 slots, you won’t be able to fully utilize some of the newer cards coming out now, unlike if you pair them with a PCIe 3.0 slot.

As we mentioned earlier, the older PCIe 2.0 slot will cause bottlenecks for the newer cards, which are likely to have PCIe 3.0 or newer connectors. And if you buy a PCIe 2.0 card, you may end up underutilizing your computer’s PCIe 3.0 slot if that’s what it’s designed with.

If you have a higher budget or you’re looking to delve into high-performance gaming or tasks, we’ll recommend that you choose a PCIe 4.0 motherboard.

After this lengthy comparison between PCI express 2.0 vs 3.0, we can see that newer versions tend to be better. Here are some key differences to keep in mind:

We assume that our article has helped you understand the difference between PCIe 2.0 vs. 3.0. However, you need to note that some motherboards, like the AMD A320 motherboard, may be designed with more than one PCIe version for different slots.