Internet vs WiFi isn’t anything new; rather, it is a query that has been around for a long. Although most of the ones asking aren’t that serious about knowing the answer, there are individuals like you who really want to understand what makes a high speed Internet connection different from wireless Internet access. 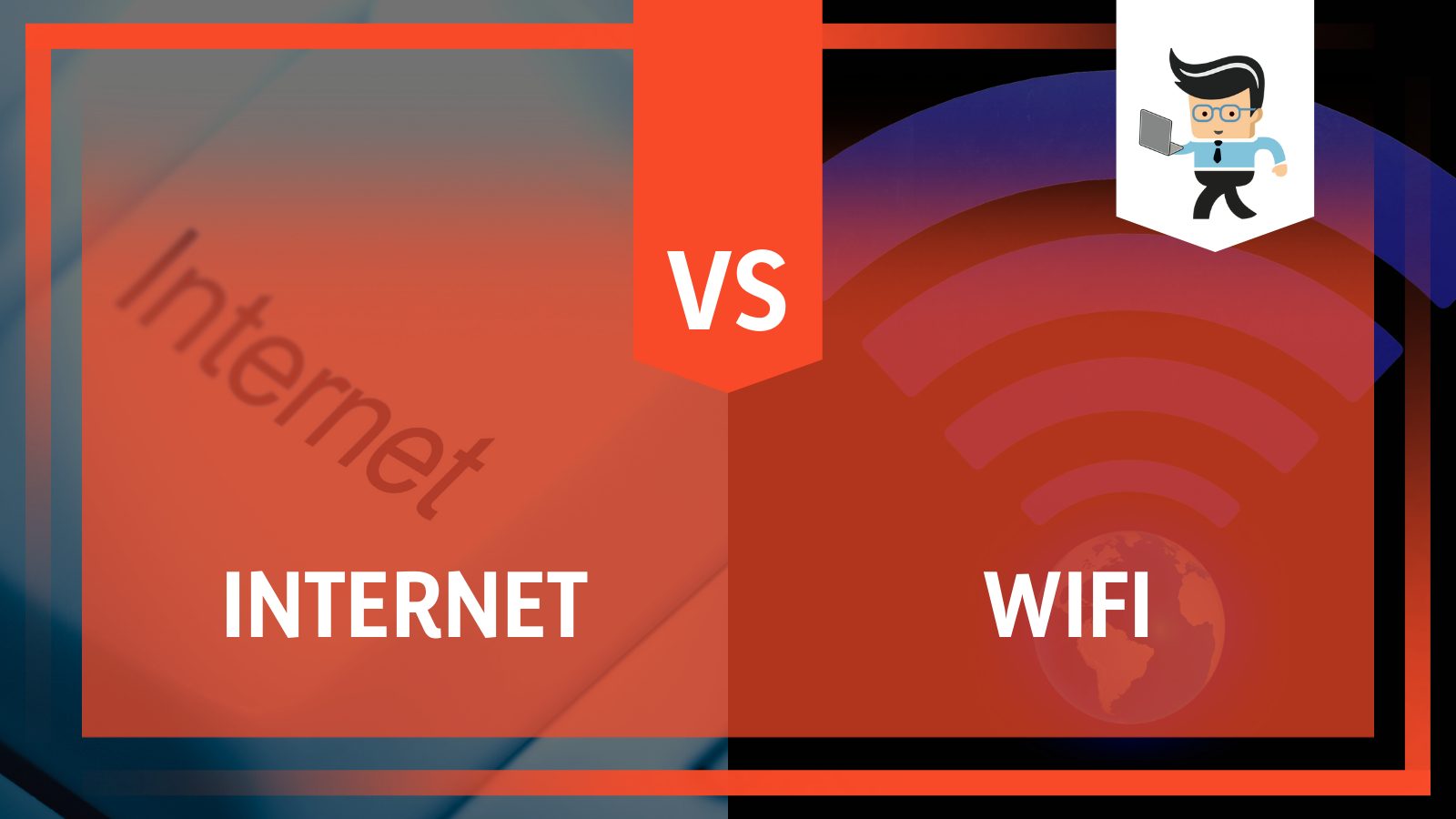 This article provides all the resources that resolve the entire “Internet vs WiFi” thing.

What Is the Difference Between WiFi and Internet?

The main difference between WiFi and the Internet is that the Internet signifies a unified data language that operates between computers all around the globe. WiFi, on the other hand, is one of the several mediums (non-wired) through which the Internet functions.

What Is the Internet Best For?

The term Internet refers to an interconnected form of connection within computer networks with the help of which a user is able to communicate and seamlessly share data. The data under concern may range from simple text messages to even rich media like music, video, and any other form of information. 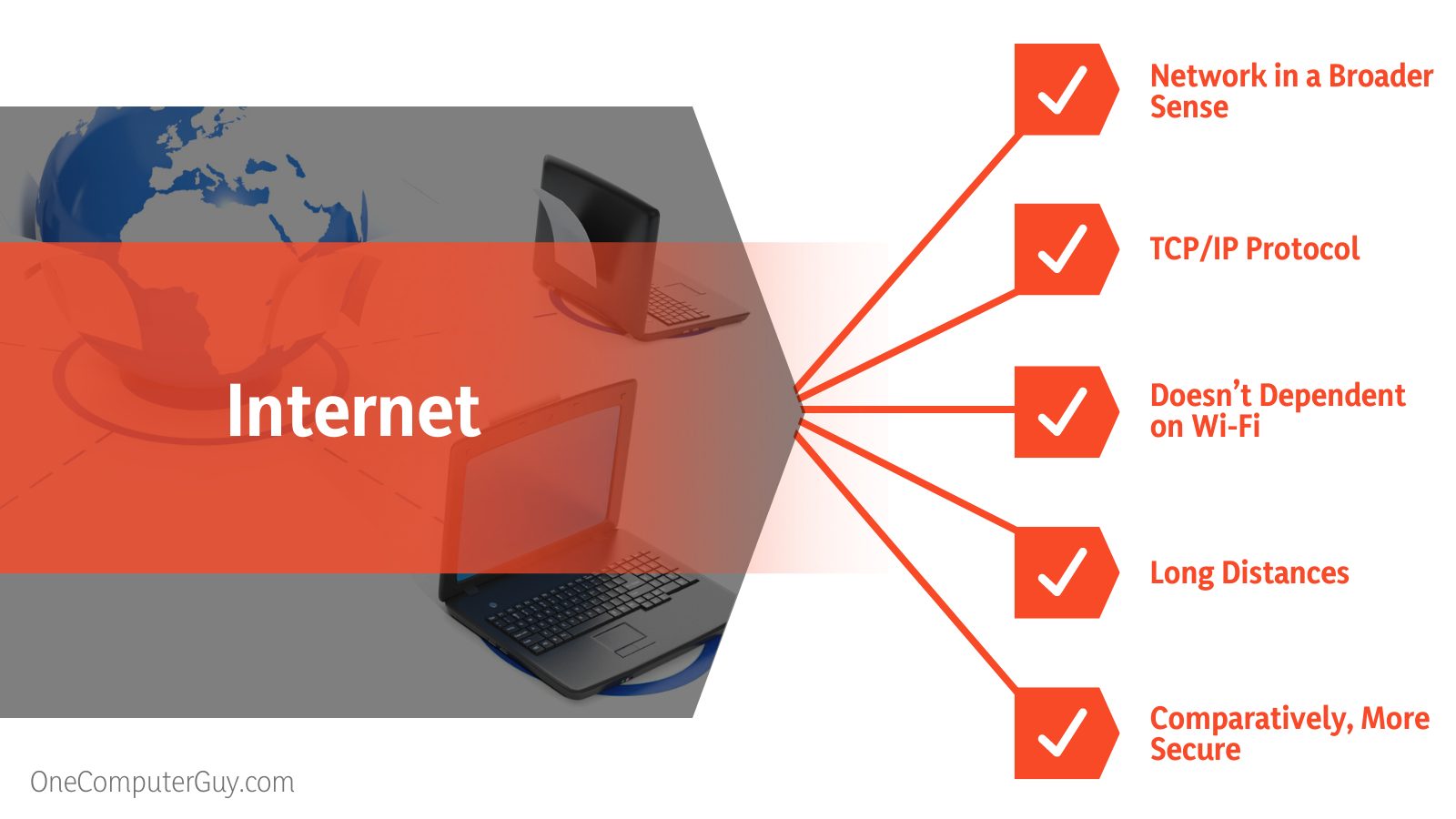 You already know thousands of benefits that the Internet bags, but surprisingly you’re still unaware of probably a couple of thousand more. Yes, you read that right. All thanks to the nature and capability of the Internet, the generation has seen quite a number of positive alterations.

Now it won’t be possible to list down all the specific situations where the Internet is the perfect fit. To help offer our readers a better understanding, we’ve sectioned those in the following manner.

– A Promising Medium for Flexible Communication

No matter how far they live, getting in touch with our loved ones isn’t trouble anymore. Back in the days when sending letters was the only mode of communication, individuals hardly had any opportunity to talk to their friends or relatives residing thousands of miles away.

How many letters do you think you can send each year?

Well, your answer will most probably be, “why do I’ve to? There are mailing services, social media platforms, and even tools with which we can even interact live every second.” That’s exactly what the reach of the Internet has made possible.

– Skills At Your Palm

Gone are the days when moving out of your home was the only to acquire skills. You can now attain knowledge and excel in any niche that too without hurting your spot of convenience. Whether you’re after coding skills or looking to be the next SEO expert, there are thousands of relevant resources sitting online that can help you attain the same.

Do you think it would have been possible without the existence of the Internet?

Probably yes, only when there was something else by just a different name, but same abilities.

– No Lack of Knowledge

Think about it, what’s the first or second thing you do these days whenever a query hits up?

It is not hard to guess; you find yourself on Google, YouTube, or any promising search engine seeking the solution. Just like you did for the Internet Vs WiFi query.

Because the enormous database of the Internet has answers to almost everything. It allows users all around the world to learn about any topic in a manner they want to.

The power of the Internet isn’t limited to paying bills; rather, it presents itself as one of the most efficient media for making money. In case you own a business, or you’re someone who is after selling products and services, there is no other place to take shelter as promising as the Internet. As already mentioned a number of times, the Internet, with its reach and capability, impacts every sector of today’s world, and money-making isn’t an exception.

Being on the Internet means being available all the time. This ongoing availability eventually plays a pivotal role in enhancing the potential of your business. Also, the fact that with modern-day Internet-based marketing, aka digital marketing, you can advertise your product or service to the most fitting consumer, the situation ensures to end up in your favor.

No more struggling on long ques, no more waiting game; you can now pay your bills, deal with banking-related activities right from your living room (in any location you prefer).

Summing up in simple words, the Internet is the best fit for every situation, wherever it involves long-range data transmission.

What is WiFi Best For?

WiFi (Wireless Fidelity) is a wireless network, a technology meant to offer wireless Internet access to digital, capable devices within a specific range. WiFi is the most common modern-day method for connecting a PC wirelessly and that too, high speed Internet without the use of physical wires. 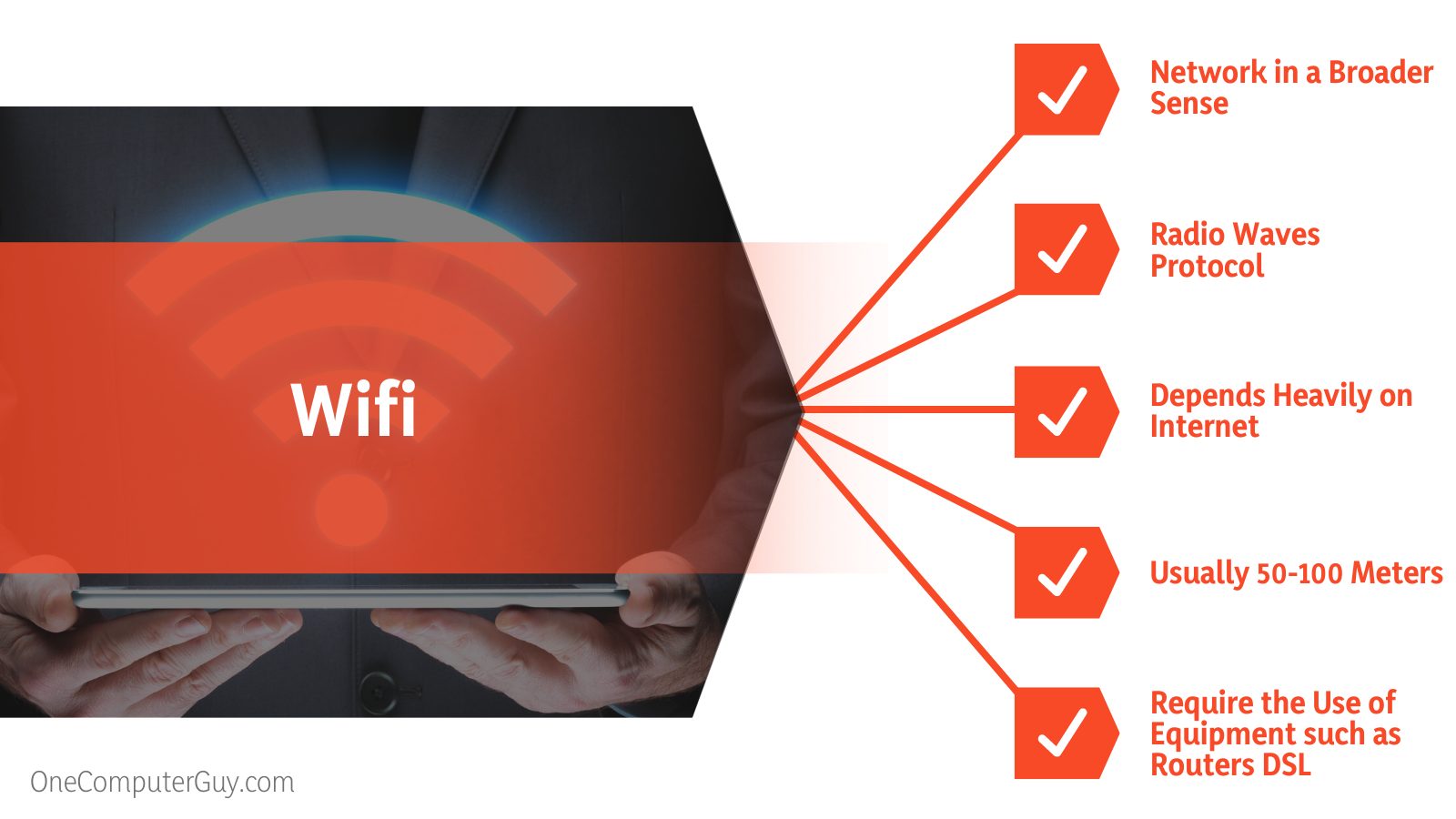 It might not be a surprising element anymore, but it surely was when the idea came to light. Having wireless Internet access helps ease things up. From checking e-mails, surfing favorite websites, and visiting social networking sites to sending and receiving messages at your level of flexibility, WiFi reflects a more convenient version of the ever-existing Internet.

It won’t be wrong to say that convenience is one thing that defines the WiFi network in a better way. The need for getting multiple devices connected to the same network isn’t rare. Nonetheless, The WiFi addresses the situation even without driving users into unwanted complexities.

Wireless means no wires, and no wires mean no restrictions with mobility. Although the range is limited, the ease that WiFi brings to the table, especially when it is about flexible access to the Internet, is impeccable. You don’t need to sit in front of the device; instead, roaming around the specific range will not hurt your browsing session.

If you’re after a network connection that doesn’t challenge your efforts, WiFi is the router to pick. The overall installation process is super smooth. You don’t have to deal with hefty wires, nor do you need to worry about the setup location. Not just that, maintaining a WiFi network is way seamless compared to what other has to offer.

For those who seek a budget-friendly option, WiFi will turn out to be the most profitable deal. No doubt pricing is an entity that varies significantly. However, in most cases, it has been found that installing a wireless network costs less than its counterparts.

Unlike the general Internet connection, WiFi focuses more on convenience and mobility. To put it in other words, for anyone who is after a portable Internet solution and worries less about security, having a WiFi connection won’t be a complaining task at all.

– Key Things to Keep in Mind

Having understood the difference between WiFi and Internet, we recommend considering the following points on “WiFi versus Internet.” These will help strengthen your concept moving forward.

Just because you’ve access to high speed Internet does not necessarily mean that you have wireless Internet access. Moreover, having a strong WiFi connection does not always equate to high Internet speed.

Keep in mind that if you use WiFi to share the Internet, it is eventually the speed that you want. WiFi is just the medium that helps transport the Internet to your device.

With that being said, if you only worry about a strong WiFi signal, you’re missing the key point. Take, for example, WiFi extenders. These devices wirelessly expand the coverage of a current WiFi network. Every time the WiFi signal is expanded, there is a 50 percent signal loss.

However, even if you have a few WiFi extenders, there won’t be much “Internet” left by the time the signal reaches the device you’re using for a fast, stable connection. Using several access points that link to the main routers through network cables is the best way to extend your WiFi network. If running wires is not an option, limit the number of WiFi extenders in a network to one.

Most importantly, when you connect to an unknown WiFi network (such as one that appears on your phone or laptop while traveling), keep in mind that the owner of that WiFi network can potentially see all the information you’re sending and receiving, including usernames and passwords. Since you need to access their router to connect to the Internet. 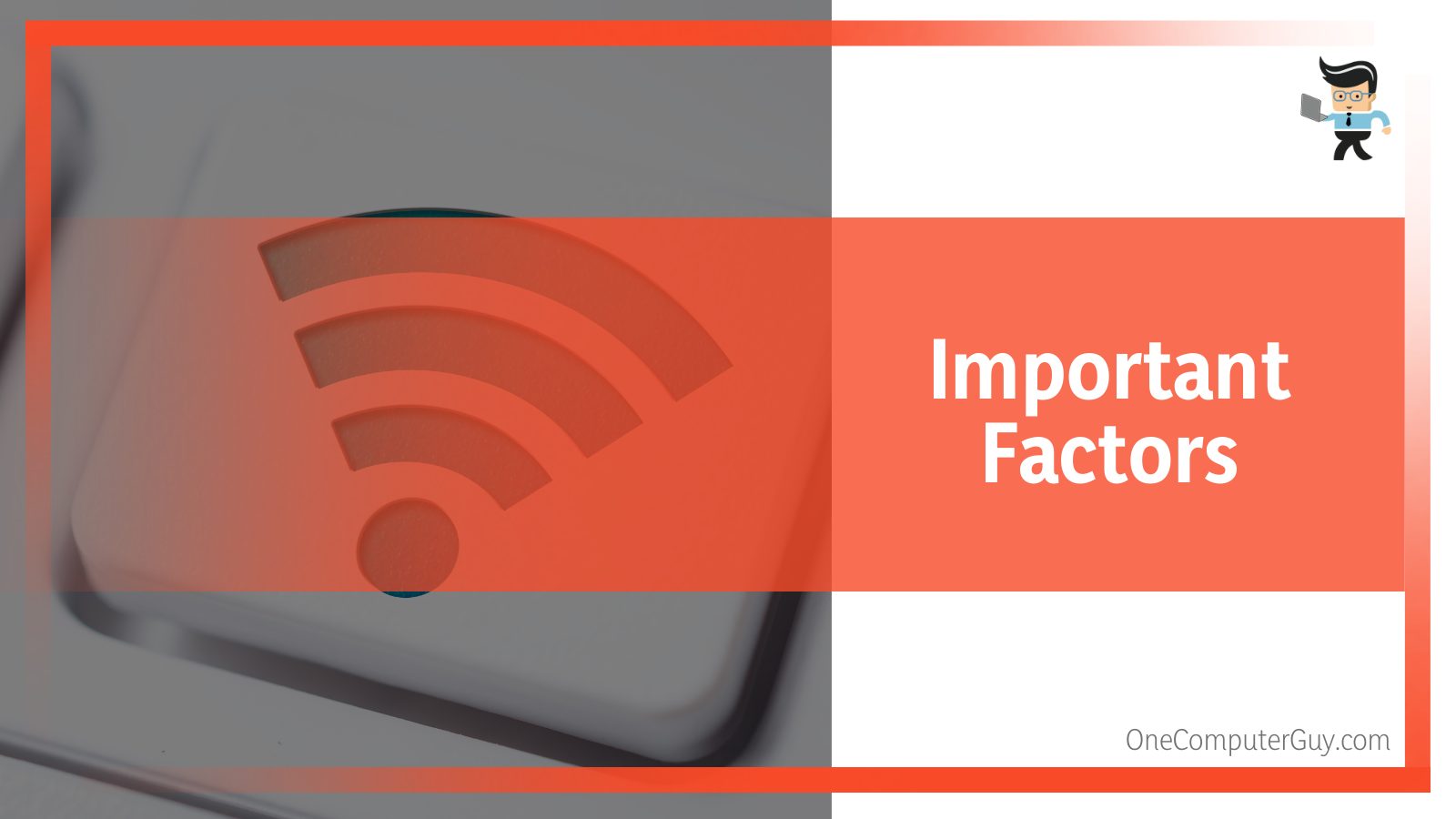 However, unless you’re accessing a secure website (one whose address, or URL, starts with HTTPS), don’t type any important information when using free WiFi. Even better, avoid performing any online banking while connected to free WiFi.

Additionally, public WiFi from known businesses, such as an airport or an office, is often more secure than a WiFi network at a random café. The most dangerous WiFi network is one that does not require a password or acceptance to the terms of service to use.

– Is the Internet and WiFi the Same Thing?

Not really, although saying that WiFi and the Internet are the same things won’t be a wrong conclusion to draw, you should understand that both reflect on different purposes when considered under minute observation. While one is the doer here, the other is the carrier.

– What Is Better WiFi or Internet?

There is no way you can determine which one is better, WiFi or Internet. Look, you need to be clear in your mind that WiFi is the carrier of the Internet. No doubt the Internet can work on various other mediums, but WiFi, to be honest, bags no definition without the availability of the Internet. However, we can say that at times, Wired Internet seems to have the upper hand over the Wireless Internet connection.

– Can You Have Internet Without WiFi?

Of course, you can. Internet isn’t dependent on the availability of WiFi; rather, the latter is. So if you don’t have WiFi that doesn’t mean you’re deprived of the Internet too.

Our WiFi versus Internet review shows that both are quite different, although being confused as similar entities many times. The main difference is that the Internet represents the core network technology while WiFi operates to aid this technology with modern-day mobility and convenience.

With WiFi, you’re looking at an entity that depends on the Internet for operations. The Internet reflects on a broader thing which can be either wired or wireless; WiFi narrows down to just wireless access. There is no harm in trying the WiFi connection and verifying if that Internet medium fits your requirements.