Ethernet vs the internet is an interesting debate because most people don’t even realize they are two different things. In fact, people will use “the internet” and “Ethernet” as interchangeable terms, but they really aren’t. 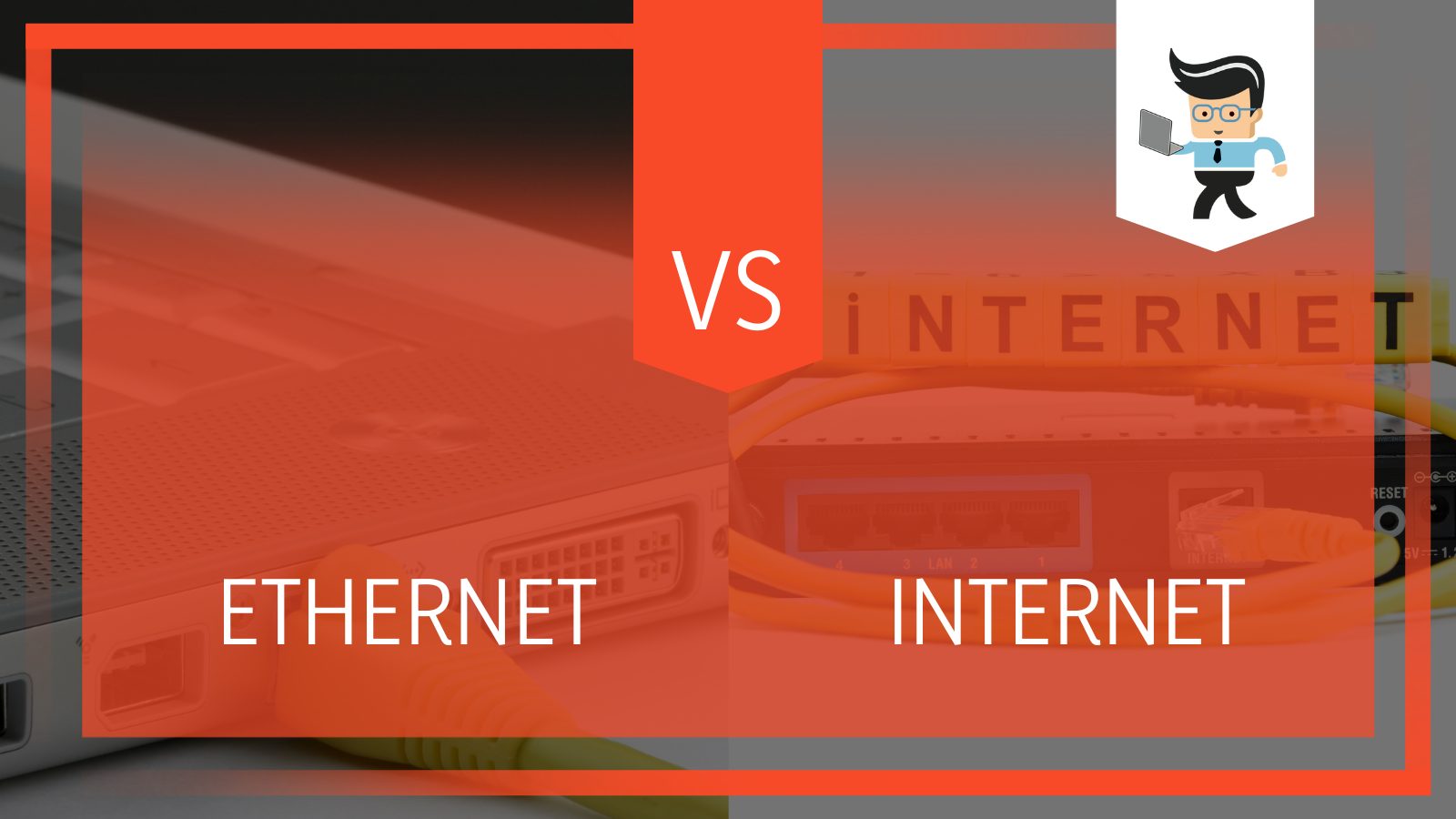 For example, you use an Ethernet cable to get onto the internet, so they cannot be the same thing.

What they are is part of the same system and network. For anyone building a computer or just getting into the world of technology, it is important to know the difference between internet and Ethernet, how they work within your network, and how they connect you to a wireless network.

For anyone who pays for their wifi or network, anyone who builds their own computer system using a router, or anyone who relies on a strong signal for the work they do, it is important to know the difference between Ethernet and internet.

Are Ethernet and Internet the Same Things?

No, Ethernet and the internet are not the same things. They are highly different concepts that do similar things.

The easiest way to remember the main difference between Ethernet and Internet is that the internet is international (worldwide), and Ethernet is local.

Of course, there are other differences between Ethernet and internet, but that is the most basic one you need to know. There are other things to think about as well, including use cases, security, and functionality. It doesn’t necessarily make sense to set up an Ethernet connection in your home, but an office space could benefit from one.

You may have heard about Ethernet cords or cables. This is the term for a local area network or a LAN.

A LAN connects two or more devices within a physical location. This may be connecting multiple computers within a dormitory or a computer lab, for example. It is commonly used where there are large numbers of computers, like in office spaces.

A LAN doesn’t require a physical cable, much like some people think. Any two devices connected within your home probably use a LAN as well. Your smartphone that connects to your home Wi-Fi network is using a LAN.

With only a LAN connection, you wouldn’t be able to connect to different websites. There are many barriers to prevent you from accessing certain websites and services, which is why it is so commonly used in offices.

It is also used because it reduces latency and increases speed for transferring bigger files. There is a tendency to have interference if there are too many people connected to Ethernet, however, and it can slow down.

The internet is the word we use generally for the worldwide network (WAN) that connects all computer systems. This allows you to access anything listed on the internet from your home. It enables you to send messages, post on Facebook, search for the news, watch videos, stream, and more. 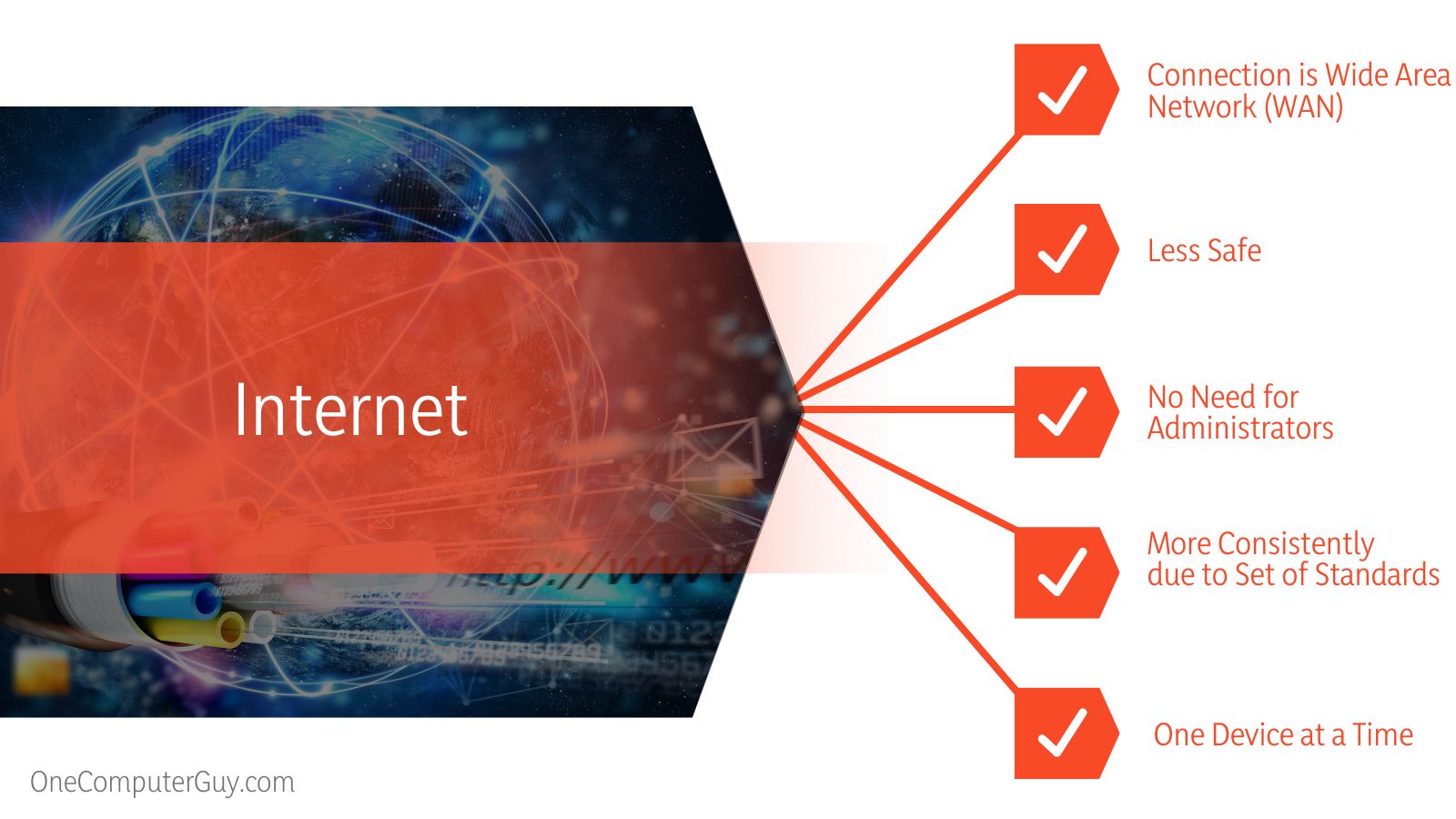 In general, you need to pay a fee for internet services that allow you to connect to the internet, but you can do so through a wired or wireless connection. Wired connections are faster.

Ethernet Versus Internet: When To Use Each

When weighing Ethernet versus internet, there is a question about when you should use each service. There are distinct differences, but there are some times when you could choose to use one over the other. Sometimes, you might even want to use Ethernet and the internet together.

– When To Use Ethernet

There are some times when it just makes more sense to use an Ethernet connection instead of your internet connection. That doesn’t mean you can’t use the internet, because you absolutely can. However, it may not be the best idea.

You should use Ethernet when you:

Ethernet connections may take a little more time to set up than a traditional internet connection, but they work just as well, if not better, in specific situations.

– When To Use the Internet

This includes when you:

Internet vs Ethernet: Using One Without the Other

There is a lot of crossover between Ethernet usage and using the internet. This is why so many people will use the terms interchangeably.

It may not even be apparent just yet why we can’t use those words to mean the same thing. You can use both Ethernet and the internet at the same time, but you can also use one without the other, which is where we state to see the differences.

– When To Use Ethernet Without Using the Internet

You can use Ethernet without connecting to the internet if you only need your devices to talk to each other. This is an excellent option for people who need to transfer sensitive information from one device to another, but it would be too risky to show that information online.

Remember that even with the best security, it is possible for someone to hack into your system and get information.

– When To Use Ethernet and Internet at the Same Time

Of course, the most popular way to use Ethernet and the internet is to use them at the same time. This is helpful for businesses and offices in particular because you can use the internet at large and connect to other computers and devices.

– When To Use the Internet Without Using Ethernet

Even if you are using a public Wi-Fi hotspot, you aren’t using LAN. Remember when you do this that you need to be careful about the information you send and receive because it is open to the public.

What Are the Main Differences Between Ethernet and Internet?

There are some main differences that you need to understand between using Ethernet and using the internet. The internet is a connection of computer networks that use specified data protocols and rules. 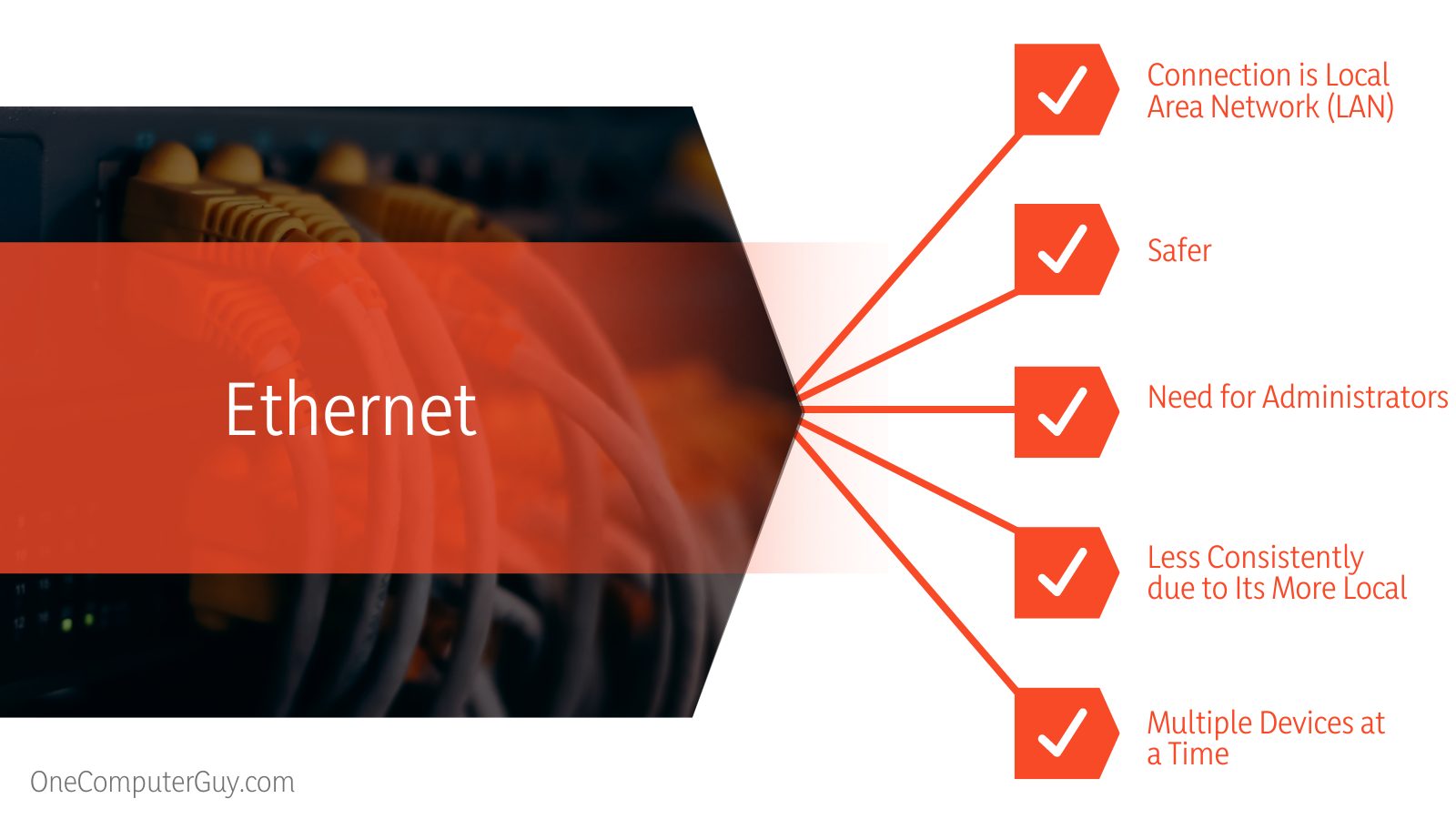 Ethernet is a local network where computers are linked physically. Ethernet will cover a small geographic region, whereas the internet is worldwide.

Some other differences to know:

Is Wi-Fi Part of Ethernet or the Internet?

Wi-Fi is a branch of the internet. It is a networking system that provides wireless-enabled devices with internet connections. It uses internet standards and radio waves to link devices using an IEEE 802.11 high-speed Internet connection.

Ethernet doesn’t use Wi-Fi at all. In fact, Ethernet requires the use of an Ethernet cable to transmit data.

Wi-Fi is far more mobile than Ethernet. For this reason, it is also so much more popular. Wi-Fi provides constant access to the internet, no matter whether or not someone has a cable connection. It is used in many workplaces where people need to move their computers together.

Wireless internet reduces the number of cables and ports that an IT team needs to take care of. Just like the internet, it has some issues with safety and security, which is why medical offices may not use it.

Wi-Fi makes it easy to move around and switch connections if there is a specific network that you need to be on. Ethernet connection does the same thing, but it just requires more setup and wires.

Ethernet connections are preferable for streaming because of the environmental factors and for transferring large documents. Wi-Fi can do these things, but it is faster and easier with Ethernet because it has fewer issues and timeout problems. Wi-Fi can be incredibly inefficient.

In Conclusion: Ethernet vs Internet

While the general public may use the terms “Ethernet” and “internet” interchangeably, you now know that you shouldn’t. These two terms mean very different things, and it can be dangerous to use them without knowing what they mean, particularly at work.

Some information cannot be shared via the internet because of how private and secured it needs to be. An Ethernet connection is always something that can be added at a later date. If you know that you are going to need it, set it up right away.

Most of us will use the internet on a daily basis, but some people will go their entire lives without using Ethernet. It just depends on what your workspace is like.