A G302 vs G303 head-to-head review can be quite challenging as they’re both quality products fit for a wide range of applications with top-notch features. 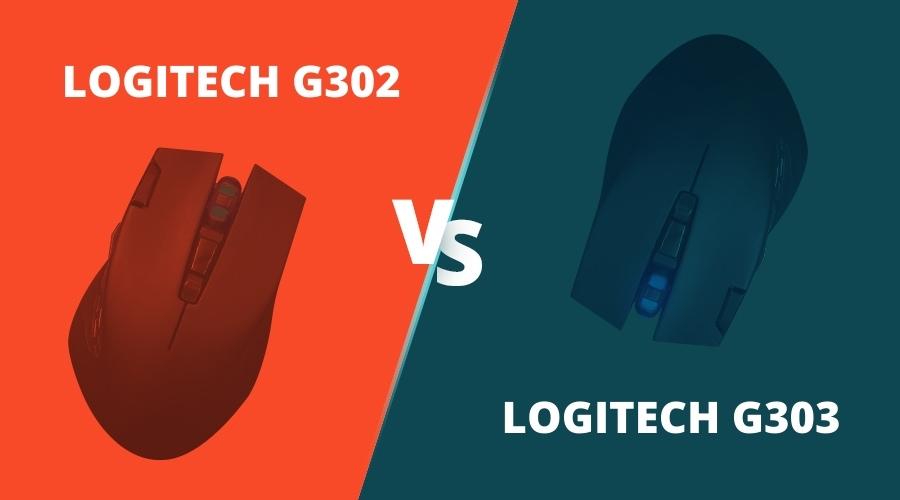 However, no two mice are the same, even though these two are cut from the same brand and lineup. Our review and comparison will help you determine which one makes more sense for your needs. Follow us as we get to the root of it!

Logitech G302 vs G303: A Glance at the Key Specifications

What Is the Difference Between Logitech G302 vs G303?

The main difference between Logitech G302 and G303 is the DPI range, with the G303 providing users with up to 12,000 to ensure better sensitivity and responsiveness than its G302 counterpart with a maximum 4,000 DPI range.

It’s difficult to set the record straight when you’re faced with two mice with identical premium features from the same lineup and the same brand. That’s what you get in this G303 vs. G302 coming together.

These two mice are the same save for some aspects – the G303 comes with genuine RGB lights and has more DPI figures. However, both use the same form of connectivity and movement detection. We’ll recommend either of them, but only after you’ve gone through what our review team has to say. 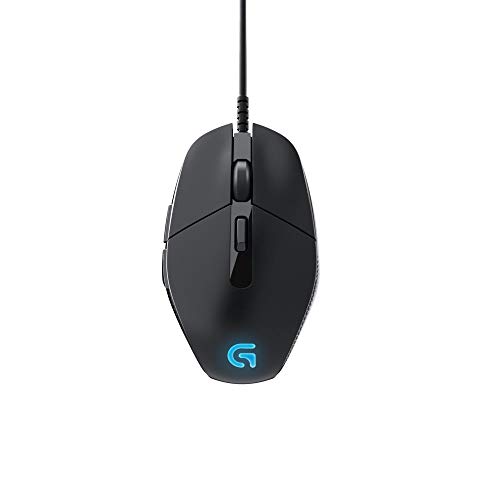 The gaming world is filled with numerous peripherals promising the best solutions users can have confidence in. Mice are part of the process.

Design and Features: Make the Features Your own

The G302 Daedalus Prime has six buttons. You get Right and Left click, Forward and Back thumb buttons, the DPI-switching “Sniper Button,” and a clickable Scroll Wheel.

The Logitech brand redesigned these buttons with a metal spring tensioning system to improve button feel and response. In all, you get smooth action and reaction when playing games.

For most parts, the mouse is ambidextrous, with lefties able to use it with some comfort level. You can also utilize Logitech’s gaming software to customize those controls by remapping four of the six buttons.

But you can’t reassign the right and left buttons; you can swap their functions. However, you can assign macros.

The moderate customizations on the mouse help it deliver on the speed and efficiency front. That’s why the Logitech G302 weight comes in at just 4 ounces. With this lightweight build, it’s smaller than many mice out there, and it has its glowing back that projects light on the mousing surface. It doesn’t have RGB, though.

It’s a wired mouse that connects via a 7-foot USB cable and has a 32-bit ARM processor inside that manages all of your presets and customizations.

Underneath the mouse is an optical sensor, which can be set anywhere between 240 and 4,000 DPI. The sniper button can be used to cycle between four DPI presets, which is ideal for cycling between different in-game activities, like sniping.

The sensor in this mouse is remarkable and should work on various surfaces, including mousepads and polished wood. Tracing is always smooth and accurate, thanks to two low-friction feet.

Whether you’re playing an intensive game or not, it won’t give you mundane problems. Logitech designed it to be accurate and comfortable.

The matte finish of the mouse promotes comfort for prolonged use with a good grip.

From our Logitech G302 review, this mouse’s simple and creative design won’t stop gamers. It’s built for those focused on MOBA gaming and will provide a competitive edge with its lightweight build, rapid-fire buttons, and customizable controls. 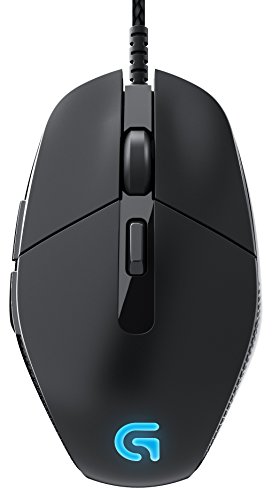 With the Logitech G303, you have an able mouse following the G302 Daedalus Prime above and sits as the company’s flagship wired mouse. It has a compact, lightweight body and impressive gaming capabilities like its counterpart above.

However, it’s more expensive than the former, but few will complain about the nature of the performances on offer.

When you first look at this mouse, you’d be forgiven for thinking its awkward shape has nothing much to offer. But it’s natural to use with its ergonomic build. It’s also on the small side and lightweight to fit flaw grippers more.

It has six buttons on the mouse, which are all programmable: left and right clickers, scroll wheel, a small Cycle button, and two spare buttons on the left side where to rest your thumb. This description shows that the mouse is built in favor of right-handed users.

However, the otherwise symmetrical design will work for lefties too. Even with its minimalist approach to design, it has two LED color-pads on the rear side panels.

Under the mouse has raised glossy panels for improved gliding. It will move without problems on different types of surfaces. The Logitech G303 weight is a couple of grams more than the G302.

Further, the mouse has impressive sensitivity, with its DPI set to anywhere between 200 and 12,000. Software is essential, and you download the Logitech G303 gaming software on the company’s website. Installing it gives you access to a wide range of features that let you tinker with the digital side of the mouse.

The Logitech G303 specs are such that they were included for gaming. Thanks to the class-leading optical PMW3366 sensor it uses to detect motion, this mouse tracks impressively. It’s also accurate enough to make the mouse feel like an extension of your hand.

As a gaming mouse, it’s an excellent fit for shooting games because of how it tracks, thus making it easier to hit targets without trying so hard.

On a general note, the G303 will get stuck into any game and will work brilliantly as a device for multi-genre players. The buttons offer spring-like reactions and are responsive. The mouse is comfortable to hold with extended usage, and there’s no evidence of cursor judder.

You can use surface tuning as well. It lets users optimize the G303’s tracking for a given surface. There are two mouse mats pre-installed in the device – Logitech G240 Cloth and G440 Hard – but you can always add yours to the mix. While this won’t make a world of difference, it’s an excellent addition to the mouse.

The G303 also comes with a keypress heat map, which shows users which of the 303’s controls they used the most during a game. If you’re a casual player, you might not find this useful, but it’s an excellent opportunity for more serious gamers to min-max their play style.

Other features you’ll find helpful include assigning macros, especially as an MMO player, game-specific profiling, and the pairing feature. It’s possible to use Logitech’s software on your smartphone.

This Logitech G303 review shows why it’s one of the best in the lineup and among other mice in its class. The lightweight design, speed, and accurate tracking movement make it ideal for serious gamers. Other cool features abound to give players a worthwhile time playing games for extended periods.

Head-to-Head Comparison of the Key Features

One of the features the G303 conveniently has over the G302 is its RGB LED capability. The G302 only gives you a blue light often pointed at the spot the mouse sits on. However, the G303 offers the real deal.

You can customize the lighting for both the LED side panels and the Logitech logo. You’ll get 16.8 million different hues to choose from, as well as lighting effects like color cycling and “breathing.” Adjust the brightness of the light if you so wish, or set a sleek lighting timer.

The DPI or Dots Per Inch feature of a mouse plays a big part in how fast, sensitive, and responsive it gets. However, even without being so high, the right number of DPI can help you play games and perform other tasks.

But we’ll go with the G303 here because it offers a DPI ranging from 200 to 12,000. You can make your preferred settings within this range depending on the functions you run. The G302 caps its DPI range at 4,000.

We ranked the performances of these two mice on the same level because they’re more the same than not. Logitech made both have similar lightweight designs, materials, USB wired connectivity, and six programmable buttons to play around with.

While you only get some blue light from the G302, the G303 goes out complete with RGB LED colors you can control using the Logitech Gaming Software. What’s more, the Logitech G303 sensor is an optical one, much like its counterpart here.

If you play games with either one, you’ll be able to set the DPI to levels you can manage. Both track well and have the same level of sensitivity with spring-like reactions from the buttons.

Conclusion: Which One Should You Buy?

These two mice from Logitech can make your gaming experience pretty easy and exciting. They have similar simple features and a well-crafted build and capabilities; you can’t go wrong choosing either one.

However, the G303 is an upgrade on the G302, no matter how small. To that end, we’ll settle for it. The lights you get make it more special to hold and operate. You can also make various changes to the system, including assigning macros and swapping button functions.