In this review, we compare Asus AC3200 vs AC3100. Most people know Asus for its graphics cards and motherboards. But the company is also a big deal in the networking world.

In-the-know PC gamers prefer its routers because they’re fast and offer a ton of features. Read on to see how these two routers stack up against each other 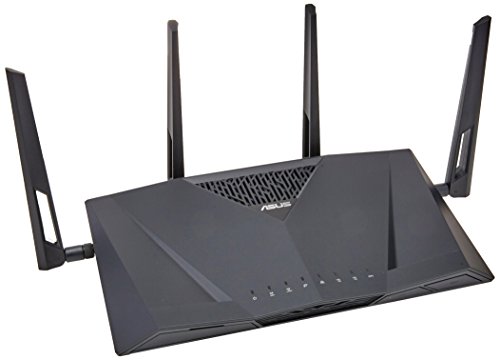 In this Asus RT AC3100 review, we will show you why this router is a superior product. First, the AC3100 supports Asus’ AiMesh technology. This technology can generate a whole-home Wi-Fi system with improved performance.

Asus attained excellent network speeds over long distances in testing. We stayed connected even after the signal from an off-the-shelf system was out of range. It means that with AiMesh, your network can deal with demanding jobs. You’ll be able to get 4K UHD streaming even from the farthest spot in your garden.

You can connect up to eight Ethernet-compatible devices to the Asus AC3100. This number is twice as many ports as most other routers provide. Storage devices, set-top boxes, and smart TVs can now have dedicated ports. So can game consoles, media players, and more, making RT-AC3100 your digital home hub.

MU-MIMO enables several compatible clients to connect. They can go online at each client’s respective maximum speed. It gives each device a full-speed Wi-Fi connection. Thus, numerous devices can connect simultaneously without slowing the network down. It’s easy to see why this feature is superior to Single-User MIMO. With the latter, the individual devices would have had to wait for sequential transmissions.

Buffering and lagging are not options. Uptime is a must, whether you’re streaming a live event in 4K UHD or gaming online in heated competition. The RT-AC3100 boosts your wireless network to the stratosphere with a combined Wi-Fi speed of 3167 Mbps.

This router comes with NitroQAM™ technology, which works well. It increases the Wi-Fi speeds for everybody on your network. The top-of-the-line RT-AC3100 is well-rounded with its lightning-fast WAN/LAN and USB speed and its wide range.

Another reason to pick the Asus AC3100 is the built-in game accelerator feature. It has built-in access to WTFast Gamers Private Network, a series of route-optimized servers, giving you stable and low ping times for ultimate gaming performance. The Asus RT-AC3200 does not offer such a feature.

The Asus 3100 supports dual WAN, which is an option to have two Internet channels connected. Dual WAN is the solution for people who need to have a 24/7 Internet uplink. It works in two modes. The “Failover” mode uses one of the connections, and when it’s down, it switches to the other one. Or you can specify a load ratio with the “Load Balancing” option. With this option, you use both connections in proportion to the channel’s bandwidth.

The only thing we didn’t like about this router was its high price. It’s not the best choice if you’re shopping on a budget, but apart from that, it’s an excellent buy. 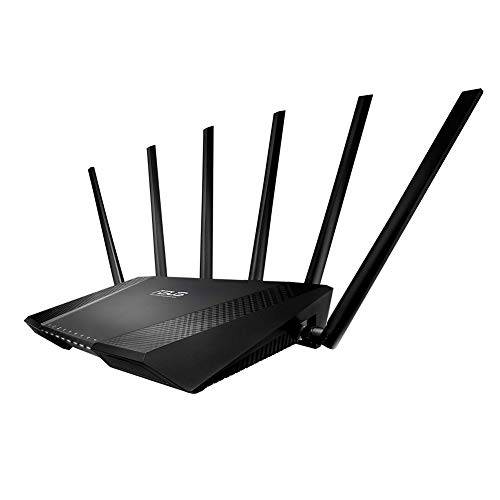 The Asus RT-AC3200 comes with AIProtection, which incorporates state-of-the-art, three-pronged security from the Trend Micro Deep Packet Inspection engine. It gives you enterprise-level protection in the home. It also prevents malware from having access to your devices. Only the most secure home routers come with these features.

Asus RT-AC3200 is a tri-band router. It has two 5 GHz and one 2.4 GHz wireless signal channels operating together. The 5 GHz band delivers superb performance that is as undeniable as its top-notch design. You can expect combined speeds of 2.6 Gbps on the dual 5 GHz bands, plus up to 0.6 Gbps on the 2.4 GHz band. These speeds can handle lots of online gaming and 4K streaming.

The six antennae on the AC3100 are in a 3T3R (three transmit, three receive) configuration. It helps to improve both the quality of the signal and the range of the Wi-Fi. This configuration allows the signal to reach almost anywhere in a large house.

The throughput speed on all three bands is outstanding. It has an easy-to-understand, feature-rich user interface. A proximity test done five feet from the router showed an average speed of 86 Mbps. That’s only a few points behind the Netgear Nighthawk X6 AC3200 and the Linksys EA9200.

With the AC3200, there’s no need to pay for VPN services. The router has a built-in VPN server and the ability to connect to multiple Internet sources at a time. You can use it to create a VPN server. Or you can turn your network-connected devices into VPN-enabled clients.

Like any other machine, the RT-AC3200 has a few problems. There’s a reported issue of frequent disconnects. According to Asus, this problem is due to a WPA key rotation that you can turn on, which doesn’t work well for some clients.

The design of the AC3200 is also impractical, especially with the side antennas. The other complaint is about the price: customers find the AC3200 expensive.

The main difference between AC3100 and AC3200 is, Asus AC3100 has a combined speed of 3167 Mbps, uses MU-MIMO technology and has eight Ethernet LAN ports, while Asus RT-AC3200 has Smart Connect technology.

We selected the AC3100 as the winner of this category because it uses MU-MIMO technology. MU-MIMO gives each of your compatible devices the fastest possible connection. Thus, multiple users won’t slow down your connection speed. The Asus RT-AC3200 has Smart Connect technology. Smart Connect will shift your devices to the most robust and most suitable network. The AC3100 has a similar feature, but it’s for gamers. Its built-in technology will send your gaming information on the quickest route. It gives you low ping times and faster response.

On the upside, both the AC3100 and the AC3200 have the Asus router app. So, you can run your connections and stay on top of your security settings.

Both the Asus RT-AC3200 and the AC3100 have AiProtection technology built-in. This feature will enable you to keep your network secure. It helps to block access to malicious sites. It also stops the sharing of personal data from infected devices.

Restrict access to certain content and various sites. Set time limits for your children with the extra feature of parental controls. This feature is present in both routers. It’s also possible with both routers to set up individual login accounts for each family member, giving each person their own network.

The Asus AC3100 and RT-AC3200 look very similar. Their shape is pretty much the same. There’s a distinction, though. The AC3100 has four transmitting and four receiving antennae. These antennae provide improved signal throughout your home. Only four of these antennae are external.

The Asus RT-AC3200 has three transmitting and three receiving. So, it will not have as strong or as far-reaching a signal as the AC3100. It has six external antennae. The extra ones are to accommodate the additional channel. Both routers have a similar coverage area, as each one has Wi-Fi coverage equal to the size of a huge house.

We analyzed the features on both the Asus AC3100 and the Asus RT-AC3200. The better router is the Asus AC3100, especially for gaming purposes. The dual-band on the AC3100 offers higher speeds than the tri-band at a lower frequency. You also get faster response times for gaming.

Another benefit of the AC3100 is the MU-MIMO technology. Finally, it has a more extended range with its extra transmitting and receiving antennae. On the other hand, if you have several devices on your network, and couldn’t care less about gaming, then Asus RT-AC3200 is the way to go.