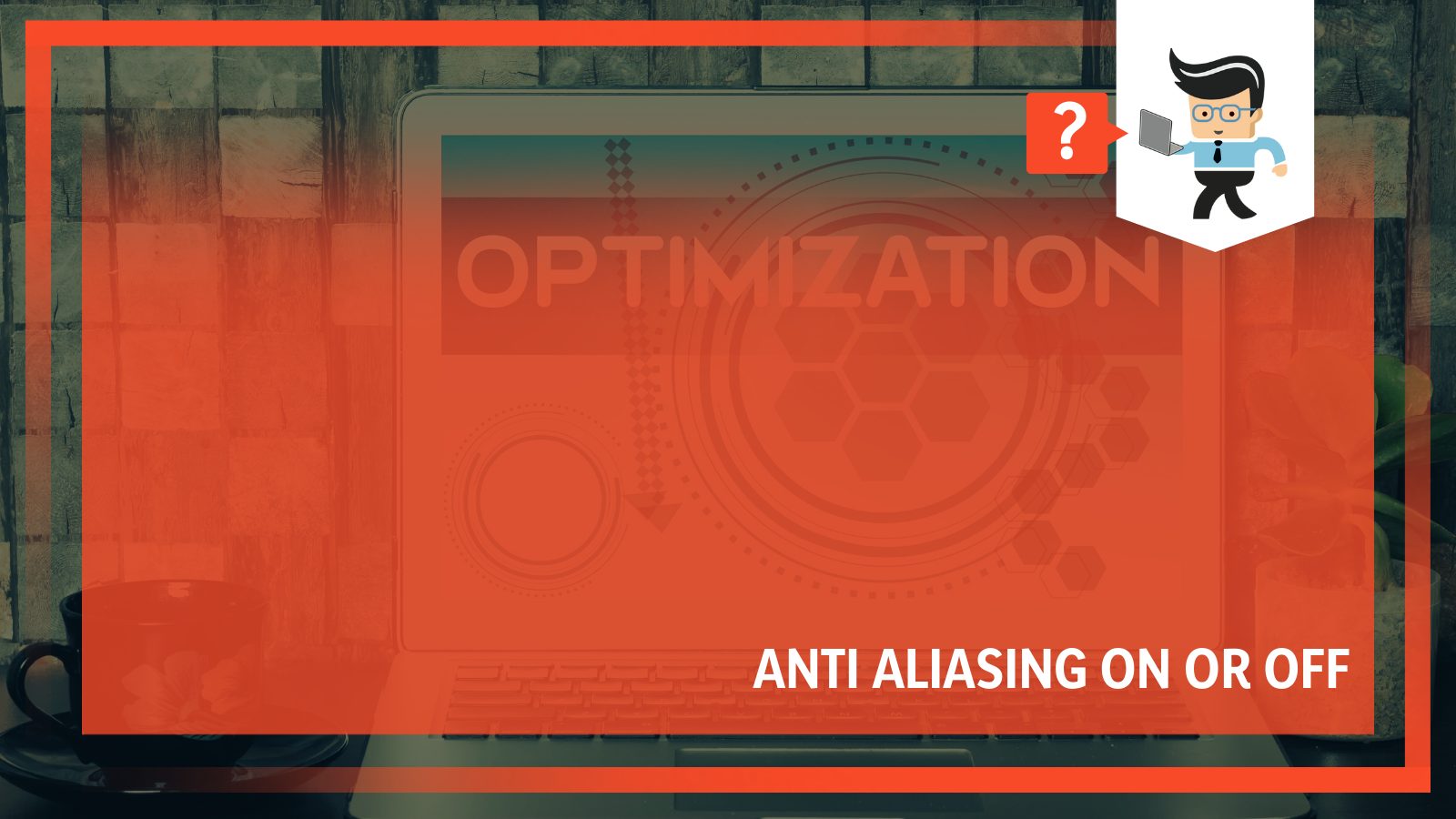 We’ll also be discussing what type of anti aliasing would be the best option for your PC, so make sure to read it till the end. So let’s get started on this topic.

Should I Turn Anti Aliasing On or Off?

If you regularly play video games on your PC or gaming laptop, you might be wondering, “Should I turn anti aliasing on or off?” Well, there are arguments for both sides of the debate, but whether you should turn anti aliasing settings on or off mostly depends on the type of gaming you do as well as the quality of visuals that you prefer.

One major aspect that has an impact on this topic also happens to be the resolution of your monitor and the processing power of your CPU and GPU. As a rule, the people who only play video games at an amateur level or for personal satisfaction and entertainment usually keep their anti aliasing on while gaming.

On the other hand, if you happen to be playing competitively, especially in an FPS game, then it is better if you turn the anti aliasing off and divert the processing power being used by this setting into your game. This will allow you to better utilize your CPU and GPU in your game without needing to sacrifice the frame rate for a little smoother image.

– Anti Aliasing Settings You Need to Know About

If you’re playing high-end games on a low-resolution monitor, you can easily use anti aliasing to get rid of the blocky and jagged edges in the visuals of the game. You can easily turn on the anti aliasing setting through the graphics window on your PC and depending on the manufacturer of your graphics card, you might get a couple of different options when you go to turn your anti aliasing on or off.

Apart from the basic option to turn your anti aliasing settings on or off, you can also choose to change the settings to 2x, 4x, etc. Similarly, there are different types of anti aliasing available that you can choose according to your preferences. We’ll be taking a look at these types later on in this article.

What Are The Different Types Of Anti Aliasing? 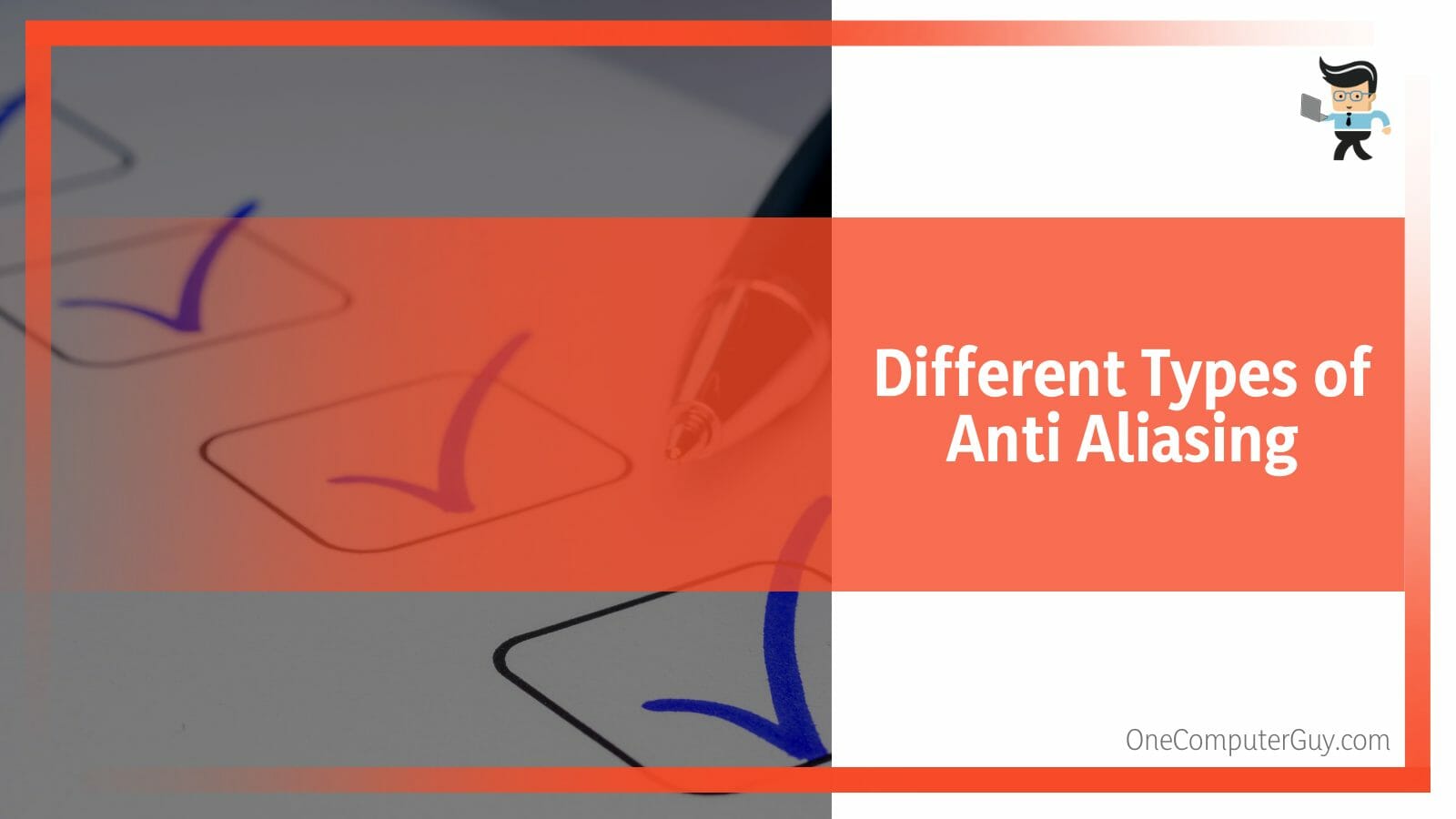 There are different types of anti aliasing, and they are usually available in modern day GPUs. If you’ve ever messed around with the settings in your graphics window, you might have come across these types already. But even if you have no idea about these different anti aliasing types, there is no need to worry because we will be discussing all of them below:

Read further to find out more details about each type:

In Multisampling anti aliasing, not all the visuals are anti aliased. This type of anti aliasing works on the basis of smoothing out only certain parts of the frame. Even though MSAA lowers the load on the GPU and speeds up the anti aliasing process, the resulting visuals don’t look great. MSAA can be used at 2x, 4x, etc., with higher resolutions.

The enhanced quality anti aliasing (EQAA) is a derivative of the multi sampling anti aliasing (MSAA) that has been developed by AMD and is available on their graphics cards. The performance principle is the same, but EQAA does not overwork the GPU when it is turned on.

Just like AMD’s EQAA, NVIDIA also has its own derivative of MSAA. This type of anti aliasing, called the coverage sampling anti aliasing (CSAA), offers a lot more functionality than MSAA while working on the same principle. CSAA is, of course, only available on NVIDIA graphics cards.

The fast approximate anti aliasing (FXAA, sometimes called FSAA) is a type of anti aliasing that does not consume much processing power when compared to other types of anti aliasing. However, it is also a pretty low standard because it tends to make the image blurry when used to smooth out the jaggies. This option is mostly used by people with lower-end machines due to lower CPU consumption.

There is, of course, a problem with over blurring of the visuals in this anti aliasing type, but there is the chance that we’ll see some improvement.

MLAA is very easy to use and has very low CPU requirements. It only needs a dual-core or better CPU to work even though it loads better in performance than MSAA or FXAA. This makes it a good option to use on any system.

What Is The Best Type Of Anti Aliasing?

Depending on your setup as well as the resolution of your monitor, different types of anti aliasing might be the best option for you. The best way to know what type of anti aliasing works best with your machine is a bit of a trial and error. 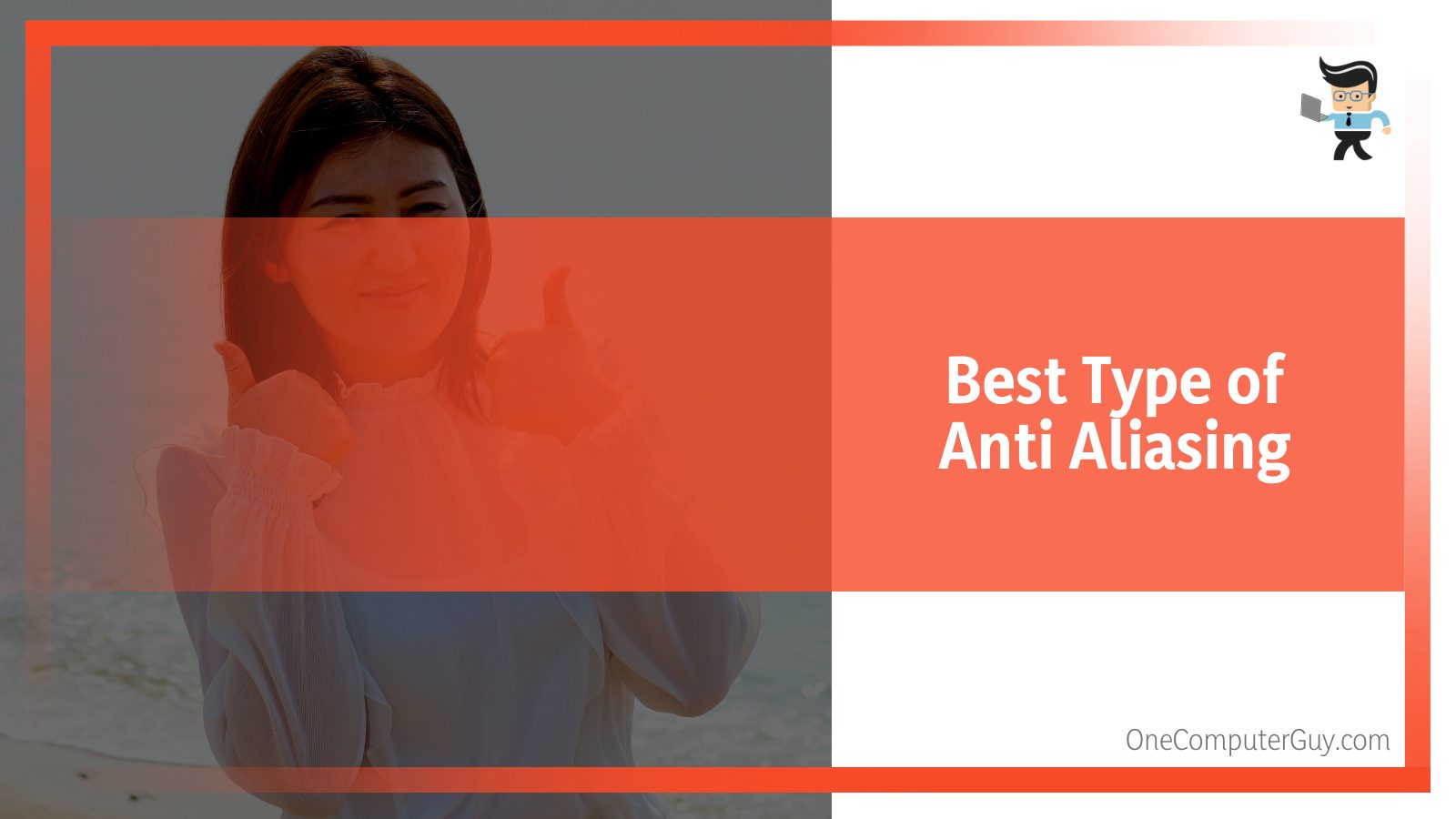 You should dig around with the anti aliasing settings available in your graphics window and try different combinations in order to get the best resolution combined with a good FPS for your games.

In spite of this, we can generalize the types of anti aliasing a bit so that we can have an idea of which type might work the best with a specific gaming setup. As a general rule, people with higher-end CPUs should prefer to use the super sample anti aliasing (SSAA) type, while mid-range processors would be better off using FXAA or FSAA.

– What is Anti Aliasing?

Have you ever played PC games on lower resolutions? If so, then you might be familiar with the concept of aliasing or “jaggies.”

Simply put, when you play a high-end game at low resolutions, you might see the game’s images having blocky or jagged edges.

This phenomenon is called aliasing. Anti aliasing is the technology that allows you to smooth out these jagged edges when playing games, even at lower resolutions, so you can get smoother visuals.

Anti aliasing settings can be enabled or disabled through the graphics window on your PC according to your preferences. If you’re playing games on a low-resolution monitor, you can also choose between the different types of anti-aliasing technology that you want to use.

– Does Turning Off Anti Aliasing Improve the Performance of My PC?

No matter what type of anti aliasing you use, it is a given that this setting will put some load on both your CPU and GPU. So if you’re playing a game with the anti aliasing settings on, then you will definitely feel a difference in the performance of your PC if you turn the AA off.

4K anti aliasing is not just a concept anymore. If you have a high-end PC and you’ve been playing the latest game titles in 4K with anti aliasing on, you might be wondering if you even need to use anti aliasing anymore.

Well, you’re in luck because playing in 4K gives you such a high resolution that you can just turn off your anti aliasing settings or simply use the FXAA settings if you want to.

The reason behind 4K games no longer needing anti aliasing is that at this frame rate, PC games have so much visual detail that you no longer need any external settings to deal with any jaggies or blocky edges. Some games may make you feel the need to turn on at least the FXAA anti aliasing, but most titles give a great gaming experience at 4K even without anti aliasing on.

Anti aliasing in games is in fact a severe matter to invest your time in.

– Does Anti Aliasing Affect the CPU or GPU? 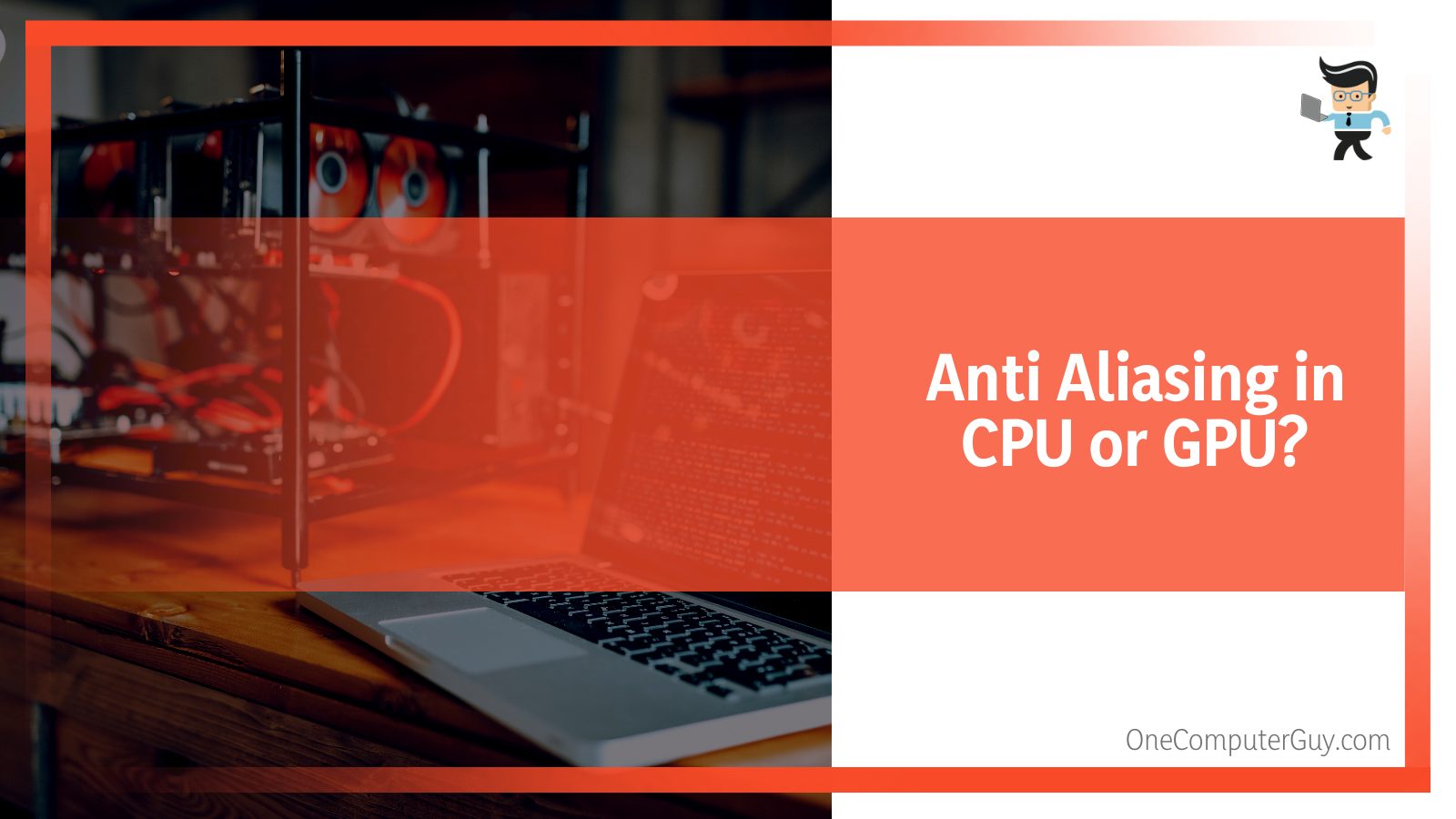 – What are Pros and Cons of Anti Aliasing?

If you are wondering what are the pros and cons of anti aliasing, the answer is below:

After looking at the different types of anti aliasing and their uses, we believe you’ll have gotten a good idea of whether you should turn anti aliasing on or off.

Now that we’re done with the discussion, the decision to keep anti aliasing enabled or not won’t be a tough call to make.