UDIMM vs DIMM — they’re not only different in terms of structure and functions, but both are also quite dissimilar when it comes to features. They are in-line memory modules used as computer accessories. 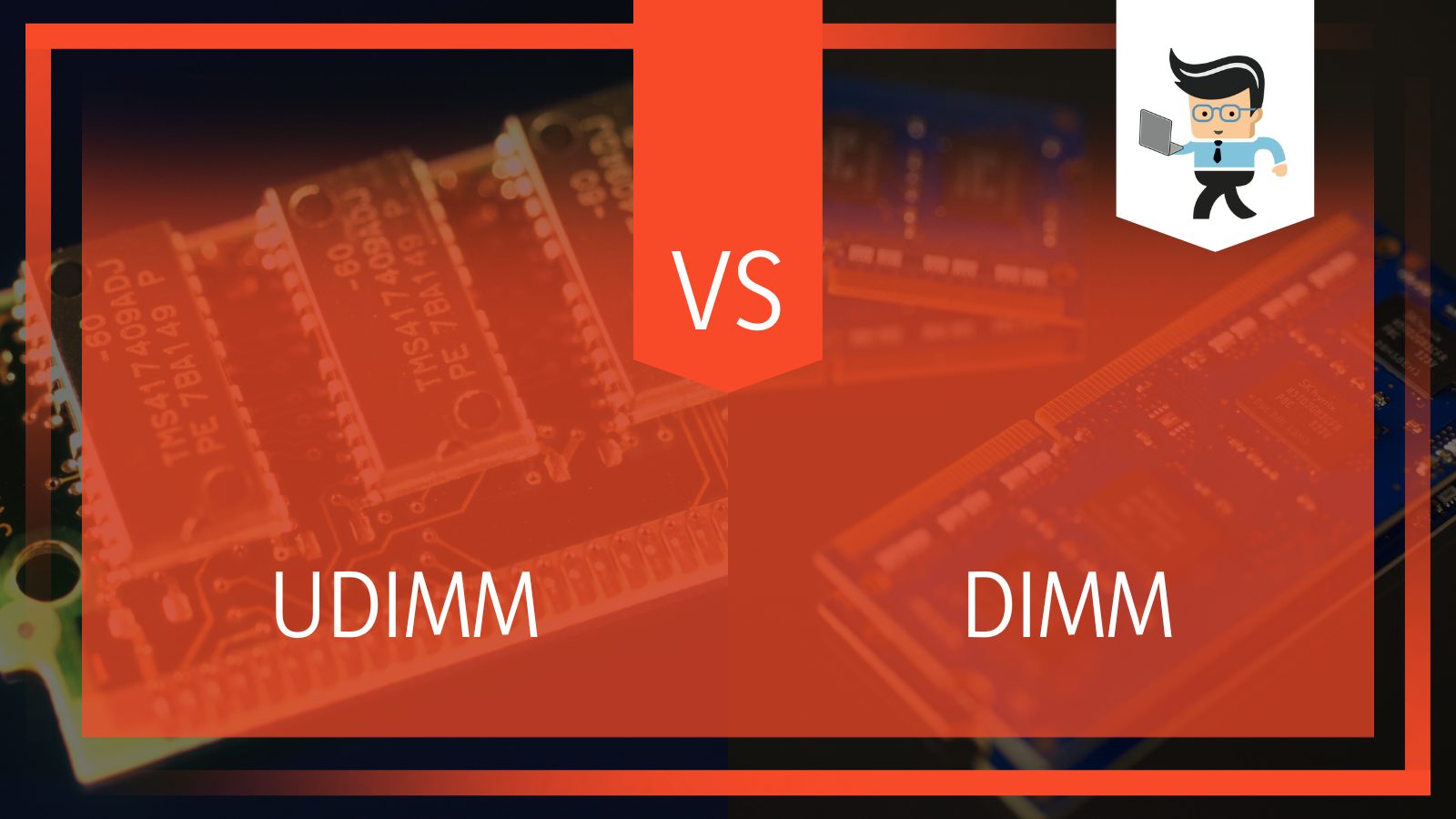 But there is quite some confusion among people about the difference between DIMM and UDIMM. In today’s post, you will learn the unique benefits of the modules along with the architecture and further types.

What Are the Differences Between UDIMM and DIMM?

DIMMs offer slightly better memory bandwidth since UDIMMs are limited to two DIMMs per channel. However, both of them are essential.

What Is DIMM Best For?

The type of memory which is used for registered memory modules is known as DIMM. In this type, memory commands are sent from the system’s memory controller to the module’s register before going to the memory module. DIMMs are integrated circuit boards that transfer data from DRAM chips to the CPU using a 64-bit data path.

Shortly, DIMM is the long green RAM stick inserted into slots on your motherboard. It has a separate memory cell for each data bit. They are present on modern-day laptops, desktops, printers, servers, mobile devices, and other devices. 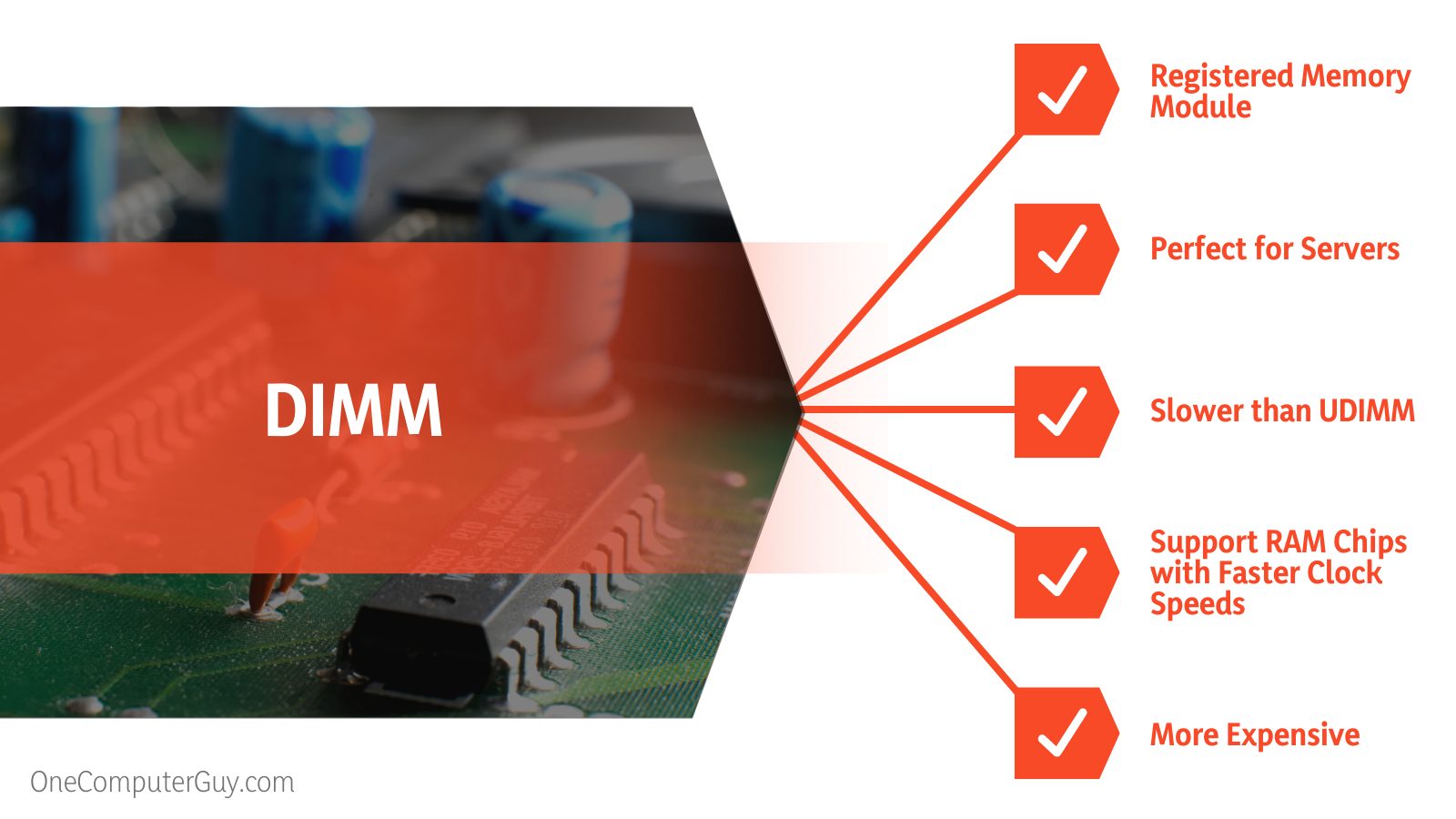 – In What Devices Do You Find DIMMs?

Because of their widespread application in consumer and commercial products, DIMMs have extensive applications in the hardware industry.

Here is a list of devices that run on a DIMM:

– The Architecture of DIMM

It is easy to consider DIMMs as the printed circuit on the motherboard. The chips are mainly integrated with DRAM and SDRAM. In addition, a number of other components and factors affect the performance of a device. By increasing the density of the chip, the performance standards are raised and a better running time is promised.

Several manufacturers used 16GB and 8GB chips, but coaling posed a problem. When the density of the chip was increased to 64GB, the manufacturers were able to lessen the heat significantly. As a result, most computers have heat-reduction technologies to minimize the heat generated by the DIMMs.

Cooling fins for excess heat venting have been added as one of these advancements. Through this method, the heat was vented from the board to the exits of the computer.

The original 168-pin DIMM has two notches, each determining a unique feature.

The type of DIMM in which onboard memory registers are placed between the dynamic random access memory (DRAM) modules and the memory controller is known as registered DIMM. They are also referred to as buffered memory.

The onboard memory registers in RDIMMs reduce the electrical load of the system by isolating the memory module from the remainder of the motherboard. Systems or servers that require stability utilize RDIMMs to boost memory capacity.

The only difference between RDIMMs and UDIMMs is that UDIMMs lack onboard buffering. Otherwise, both of them have the same memory. RDIMMs increase efficiency in computers that use at least three modules per memory channel.

As a result, the advanced memory buffer is able to correct errors and compensate for signal degradation without adding additional workload to either the memory controller or the processor.

The standard DIMM is double the size of the small outline dual in-line memory module. It’s common in portable devices.

Load-reduced DIMMs use an isolation memory buffer that reduces the electrical loading of the motherboard but does not affect the power draw. More modules can be put in each memory channel which increases the volume of system memory without causing a high latency tax.

Different types of DIMMs can not be mixed in one server. In other words, you should select a server that delivers the capacity required for optimum performance.

Being present specifically in personal computers, UDIMMs don’t register or buffer on the motherboard as commands from the memory controller in the CPU go directly to the DRAM. They run fast in systems with only one or two modules per memory channel.

What Is UDIMM Best For?

In this type of memory, data is transferred using a microprocessor instead of a register or buffer. UDIMMs offer more rapid performance as it allows multitasking for cheaper pricing. 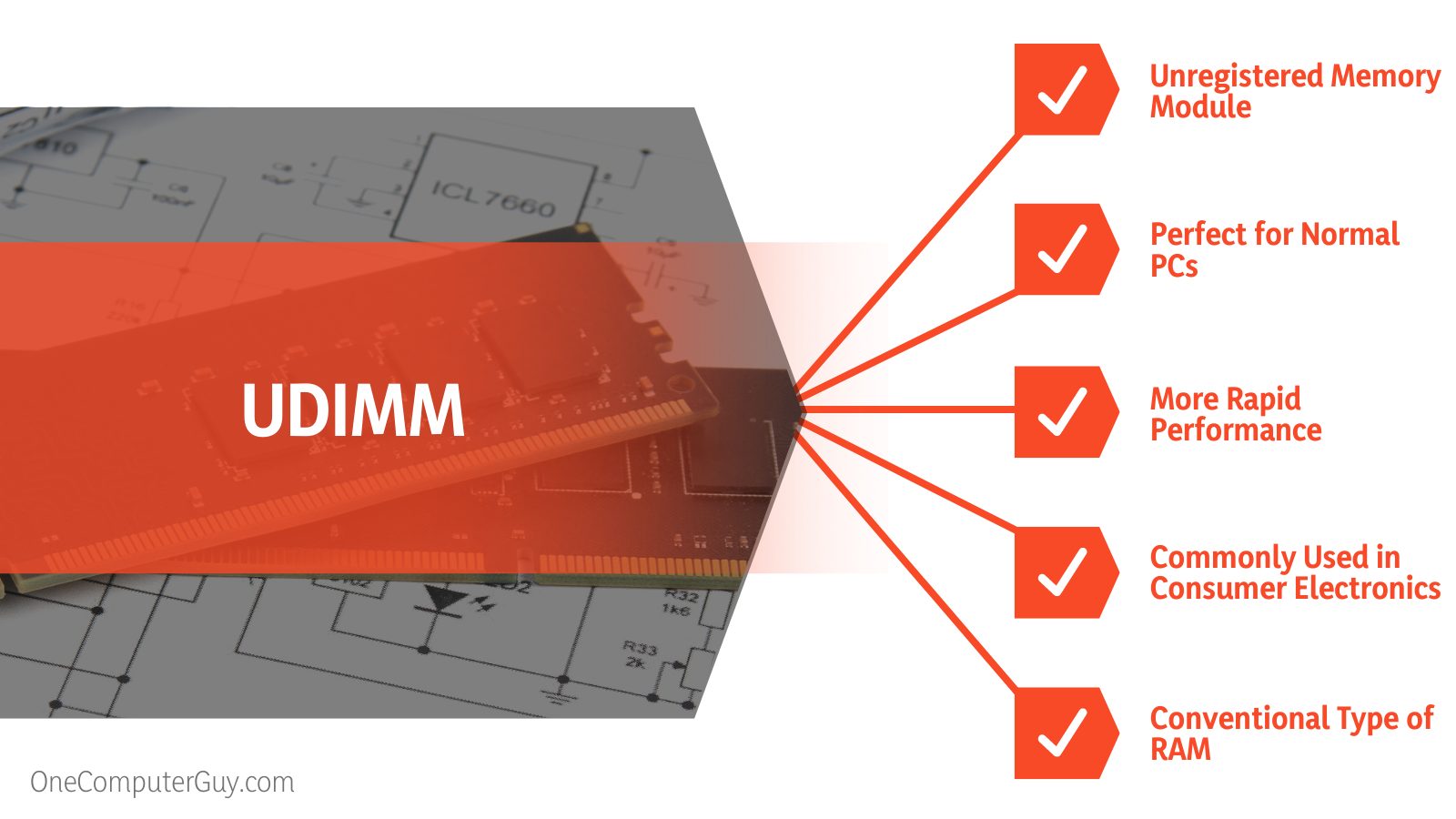 For personal computers and notebooks, it offers a reasonable trade-off between stability and speed. UDIMMs are the only type of memory commonly used in consumer electronics, including laptops and desktops.

The downside of having a registered memory is that it will take about one CPU clock cycle longer to execute as the signal must pass through the register first before reaching the memory.

Register memory modules are also more expensive than unregistered memory due to the extra circuitry required for the register in enterprise use cases.

The memory used in consumer laptops and desktops will always be unregistered or UDIMM, which is considered to be the conventional type of RAM. This is because consumer systems don’t need nearly as much RAM for the applications.

They don’t need the same reliability standard their server needs to register memory is usually only supported on server-class CPUs such as the Intel Xeon lineup and AMD epic family. 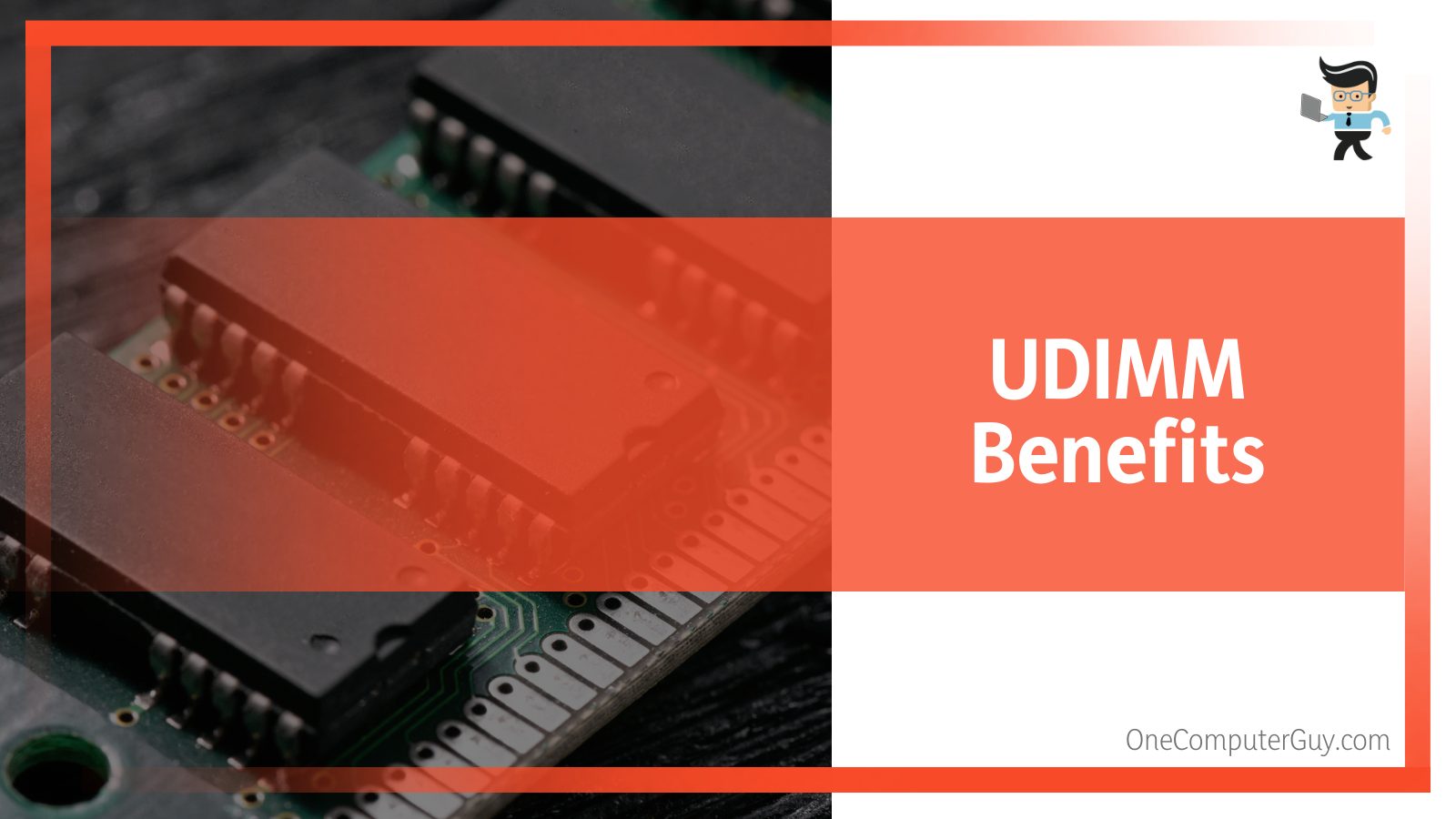 – Can We Insert DIMM RAMs Into UDIMM Slots?

Yes, there is a register between the DRAM and the system memory controller, called Buffered Memory, or Registered Memory. Because of this, a single system can be stable with multiple memory modules while putting less electrical load on the memory controller. A conventional memory that is not buffered or unregistered can be compared directly to registered memory.

So, if you’re wondering whether UDIMMs can be used with DIMM RAMs, the answer is yes. If the two RAM modules are the same, you can easily insert a DIMM RAM in UDIMM slots. A good example is inserting a DDR3 DIMM into a DDR3 UDIMM slot. All DDR1/2/3/4/5 slots are of the same type in this case. It is not possible to use a DDR4 DIMM with a DDR3 DIMM.

– Is UDIMM Faster Than DIMM?

There is an additional buffer between the memory controller and DRAM in DIMMs. Therefore, UDIMMs offer faster performance at lower prices at the expense of stability.

Let’s sum up all the different aspects we have covered here. We talked about the primary differences between UDIMM and DIMM, wherein DIMM is the registered and buffered memory module while UDIMM is unbuffered and unregistered. These modules have their own benefits and applications.

So if you plan to purchase RAM for your personal computer then UDIMM would be the best option. UDIMM slots are found on regular motherboards, producing faster performance. On the other hand, DIMM is ideal for servers. This is because stability is the priority over performance.