If you are trying to weigh your options between a 3 pin vs 4 pin fan, you might get a lot of contradictory information. The truth is that from the outside looking in, there isn’t a lot of difference between 3 pin and 4 pin fans, but once you get into their function, temperature control, fan control, RPMs, signals, and more, there are subtle but important factors you need to consider. 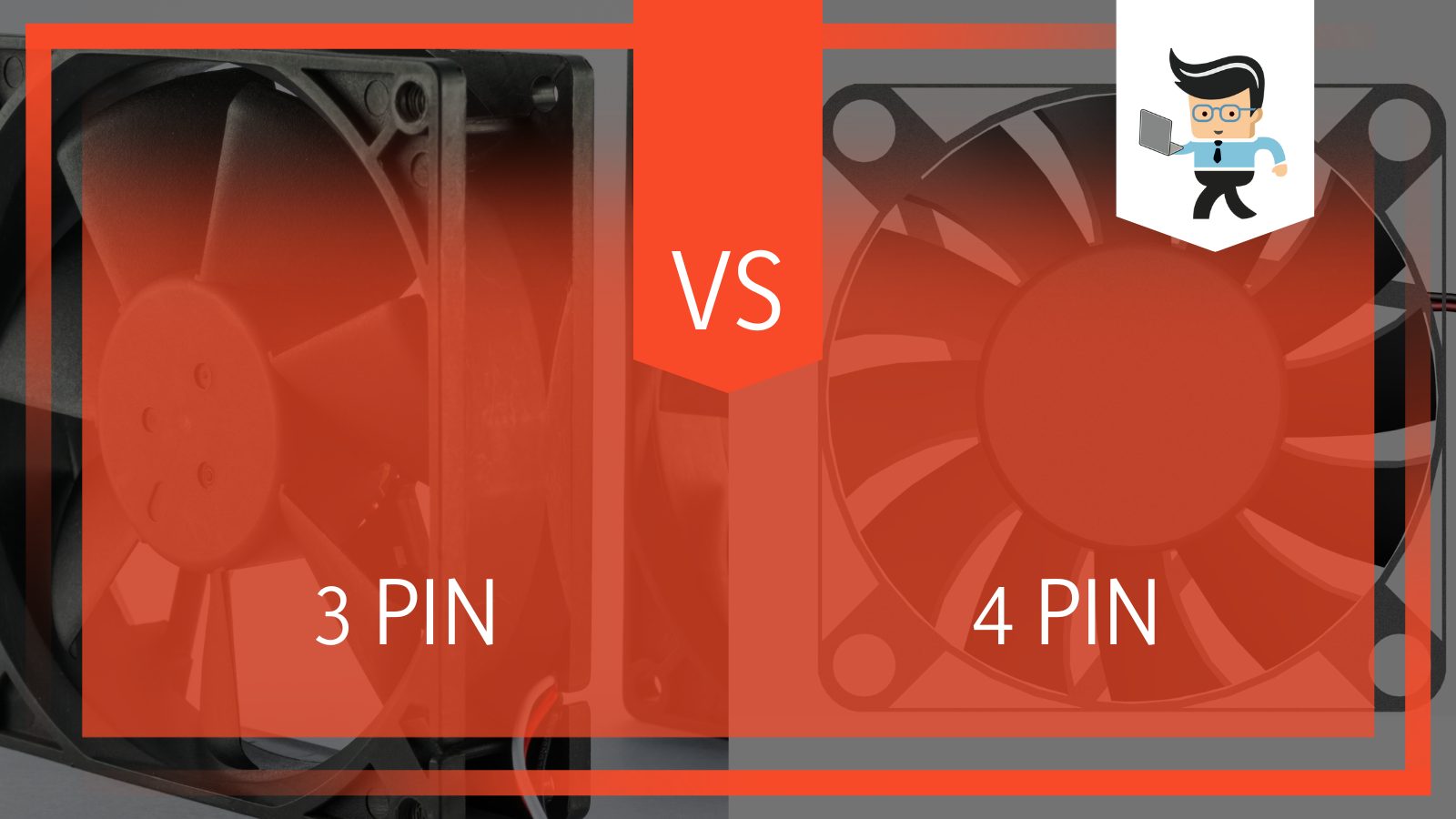 In this guide, our experts will work you through the different types of computer fans, explain the significance of voltages, and weigh whether a 4 pin CPU fan or a 3 pins fan is the better option for you.

Be sure to read the entire guide and think about how you use your computer because that is going to dictate your answers.

A 3 pin fan is so named because it has three pins or indicators. The name also means that there are three wires.

The wires are for power (first wire), ground (second wire), and tachometric signal or speeds (third wire). All of these wires work together to regulate fan speed, performance, and PC cooling.

The tachometric signal controls most of what happens within a 3 pin fan. It adjusts the level of power that gets applied to the motor by transmitting the speed of the fan impeller (the fan’s rotation) at a set voltage, typically somewhere between 5 to 12 volts in most standard fans.

When the fan increases or decreases the voltage, the speed changes. Other than that, a 3 pin fan works the same as any other type of computer fan pins by moving hot air from the different components (like the motherboard or CPU) and pushing it out through vents.

Most modern computer builds, and motherboards have transitioned away from 3 pin fans and instead use 4 pin fan headers. A 4 pin fan connector is different because it has a fourth wire.

This wire is called the “PWM wire” or the Pulse Width Modulation wire. This is used to help control the power supply of the load, which controls the rotation speed of the fan impeller.

The PWM wire is critically important for most modern gaming setups and any professional computer. It adjusts the speed and provides feedback, so noises are reduced, and your cooling system can be more efficient.

That single wire is the biggest difference between 4 pin and 3 pin fans, but there are a few other things to be aware of that make them unique.

What Is the Difference Between 3 Pin and 4 Pin Fans?

The main difference between 3 Pin and 4 Pin Fans is, 4 Pin fans are quieter, last longer and have automatic Pulse Width Modulation while 3 Pin fans are noisier, have shorter lifespan and the rotation speed is controlled through software.

There are a few differences to understand other than another wire and connector. These differences impact how the fans themselves operate and interact with the rest of the computer, not necessarily how they physically cool it.

As mentioned, PWM is the biggest difference. It takes the cooling systems of yesterday and moves them into today’s world. Anyone who uses their computer or laptop heavily, whether they are gaming, editing, or even streaming, needs more cooling at certain times than at others.

Your computer needs to be able to weather this load and remain efficient. A fan running at full speed will cause breakdowns.

PWM helps to cool and control heat when your processor is under heavy duress. As the processor shifts, so will the fan. The RPM will slow down, and the voltages will go down whenever possible.

Now, it is possible for a 3 pin fan connector to control rotational speed, but it takes more work and is done through software, not automatically. It is somewhat harder to control voltage without actually breaking down the computer and getting into the mechanical aspects of the pin.

PWM is the main reason it is easier to find a 4 pin fan header and why it is so compatible with modern computer parts, including video cards.

If noise is something that matters to you, whether you are using your computer in a dorm, computer lab, or other work environments, then there is a notable difference between the noise emissions of a 3 pin fan and a 4 pin fan. 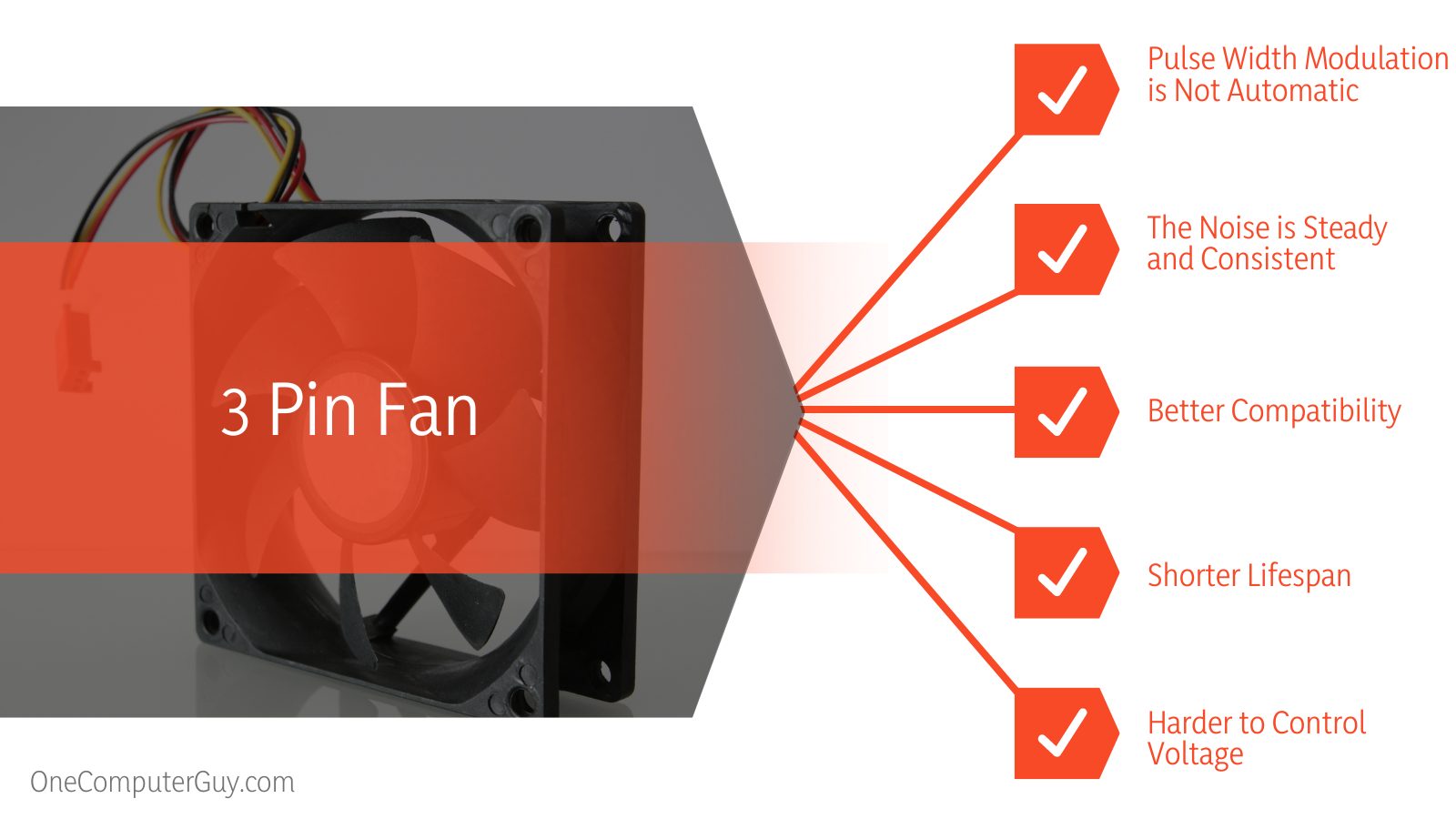 The three pin fans rotate at a high potential; the noise is steady and consistent. A 4 pin fan will be quieter most of the time, but the sound isn’t as consistent. This can cause it to be more distracting to some people.

In general, you aren’t going to get a fan that is completely silent. Add in RGB lighting, other components, and additional stress, you are definitely not getting any quiet. However, 4 pin fans are quieter overall, especially under high loads. If you are going to game or push your computer regularly, the fluctuations shouldn’t dissuade you from the 4 pin header.

– Compatibility with Other Parts

CPU fans need to be compatible with the other parts of your build, and it can get complicated. CPU fans will always go with copper or aluminum heatsinks.

The 3 pin connectors are better with smaller fans that don’t need to use a lot of power. Meanwhile, 4 pin fan connectors are used with parts that will have high power consumption.

Sometimes, you won’t be able to use a 3 pin fan or a 4 pin fan with certain parts; the connections just aren’t right. Either you won’t have enough connections, or you will have too few. In some cases, you will use them by leaving one connection empty or not connecting that fourth PWM wire.

Since most modern fans use 4 pins, they tend to have a longer life expectancy as well. Fans are rarely going to break before other components in your computer, but they can degrade in quality and performance. The 4 pin fan has a longer lifespan because of the variations in speed: they aren’t constantly going at the same rate.

How clean you keep your fans, the amount of cooling you need, and the brand of your fan will all also impact longevity.

3 Pin vs 4 Pin Fan Connectors: Which Is Better?

If you are going to buy a new fan for your computer, if it is compatible with a 4 pin fan, buy one of those. The PWM fan is your best bet all around, even if it costs a little more. Purchasing this type of fan will help future-proof your purchase and give you better cooling, protecting your other investments. 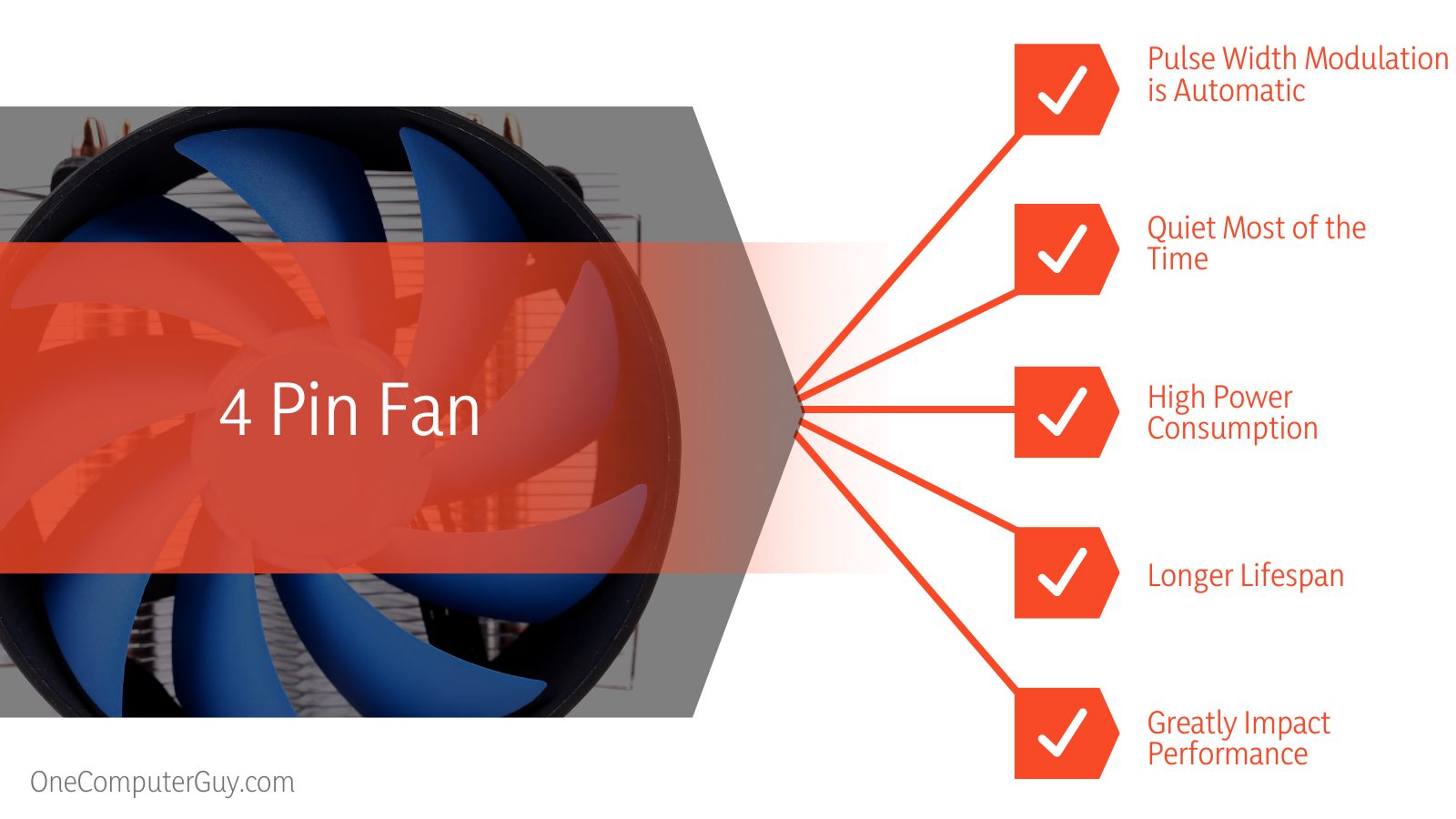 When you are going to make your purchase, look for a “4 pin” designation. If you don’t see it, you can either look into the details or look for the “PWM” designation.

If you already have a 3 pin fan that you like, you can plug a 3 pin fan into most motherboards. You won’t get all of the benefits, and it may have some other minor issues, but it should be able to work.

Only use this method if you use your computer for tasks like word processing or social media. Gamers or editors shouldn’t try to connect a 3 pin but rather invest in a new 4 pin fan.

Even though fans seem simple and like they don’t do a lot, getting a 4 pin fan connector can greatly impact performance. It will help to keep your computer cool and long-lasting.

Computer fans have a big job, including preventing moisture build-up, overheating, dry rot, and more. You want to invest in a good fan, and right now, there is nothing better than a 4 pin fan.