Selecting the best monitor for your build usually boils down to the age-old 5ms vs. 1ms response time battle, which has a lot of impact on your overall gaming experience. 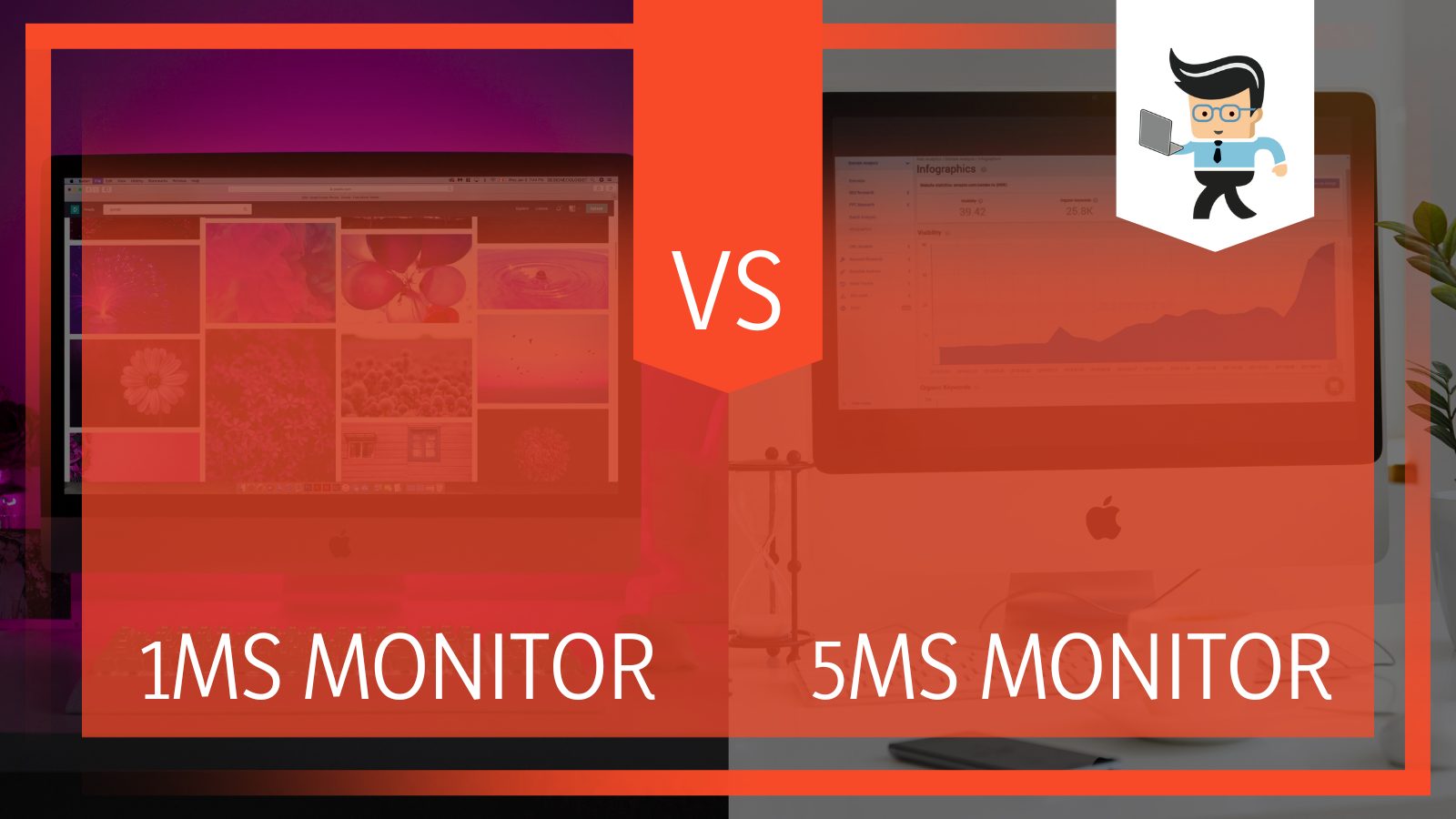 The response rate of your monitor is referred to as the rate at which a pixel can display on your monitor’s screen, whether that’s from one color (or shade of color) to another. It can also mean how quickly the monitor displays or responds to a gaming command.

If you have ever wondered whether a 1ms or 5ms time is good for gaming, you’re not alone. However, most would agree that 1ms responses stick out, especially for gaming PCs. There’s a general acceptance that the lower the response time, the better the performance.

In your bid to get that awesome response time, any detail that presents an advantage should be snatched at. As we proceed, you will get to know more about your PC’s response times and the fastest monitor for your rig.

The main difference between 1ms and 5ms monitors is, a 5ms monitor is five times slower compared to a 1ms monitor.

Response refers to the length of time a given monitor or panel needs to change the properties of each pixel. With most TFT LCDs and other monitors consisting of millions of pixels or transistors, speed is essential. For instance, if a 4K monitor had about eight million pixels, velocity is important.

Response time reveals how long it takes a monitor to turn a pixel from one color to another. For instance, from red to green or blue to black. As a rule, the faster this change happens, the more responsive the updates of images are. This results in a smoother display and a higher refresh rate.

Further, most monitor brands list GtG (Gray to Gray) response times. The reason for this is that switching pixels between different shades of gray is much quicker than changing among base colors or RGB. Therefore, the GtG response time of 5ms and under is good for gaming. However, what enthusiasts really want is 1ms due to its faster responses.

Zero is never a possibility with the technology available. As a gamer or an avid monitor user, it all starts with 1ms. Imagine playing a first-person game with a 1ms monitor. You hit the turn-left button to maneuver your vehicle. Your monitor receives this data from your PC or console and needs to update the resulting image you see.

In a monitor with 5ms, this action will be completed five times slower than a 1ms monitor. Of course, all of this happens in the course of milliseconds, so you won’t notice much of a difference. However, if you’re an avid gamer, every little second counts because games are designed to be responsive. Generally, response time contributes to lags, delay, or smooth runs.

A monitor response time comparison shows that the panel types support slightly different response times. Even though there are little gaps now, TN panels have the distinction of being faster with responses.

This means they are better suited to reflex-based games.

Presently, just about every TN panel uses 1ms. This makes them the only ones capable of 240Hz refresh rates. On the flip side, VA and IPS panels usually make use of 2m–5ms even though they provide much better colors and viewing angles.

A 1ms TN panel performs the least pixel-processing of all three main panel types. This explains why their speeds are pretty high. VA and IPS panels which feature 5ms are basically built to ensure better colors.

However, better colors translate to more processing time, hence the delays associated with 5ms. With TN, you get the fastest response times going straight to the pixels.

Additionally, a higher resolution translates to a need to update many pixels. Technology keeps changing to combat these changes with many 1ms and 5ms monitors doing their best to send signals faster. This means gamers won’t really feel the differences with a larger monitor or a 4k-enabled model.

A lot of enthusiasts still mistake the refresh rate for response time. While the differences may be slight, they’re not the same. The refresh rate of a monitor is the speed or rate at which the monitor’s image changes or refreshes. A faster refresh rate means more updates of the image in question. It will appear smoother per second and is normally measured in Hertz (Hz). 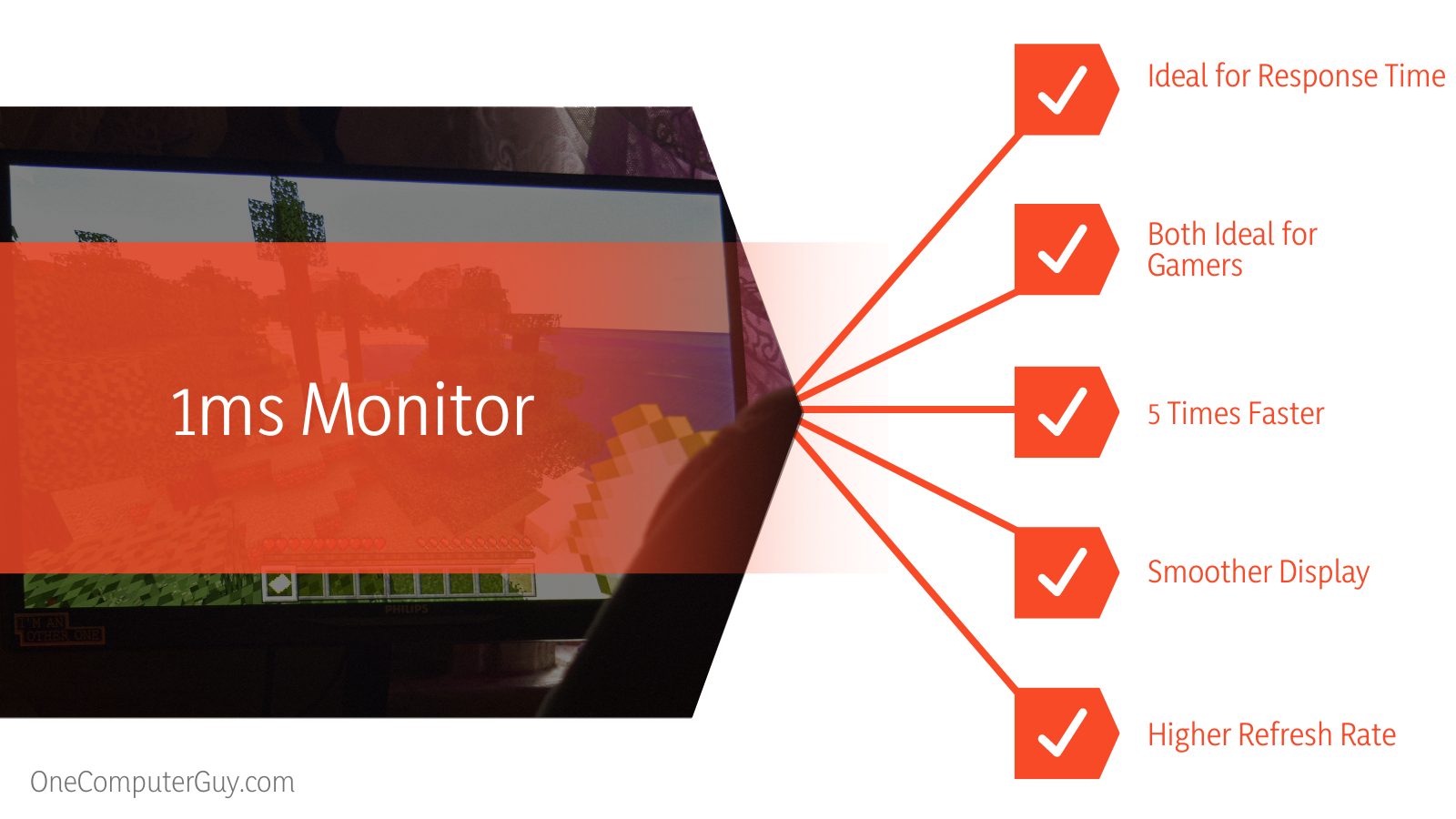 On the whole, the acceptable level of refresh rate would depend on the application you are running. For example, cinemas operate at only 24Hz. Old TV standards had PAL and NTSC running at 50Hz and 60Hz. For PC monitors, there’s a standard refresh rate of 60Hz.

Displays take only one millisecond for the pixels to draw on any frame. It’s great for 60Hz and also 144Hz. If you’re not interested in gaming, the latter, 60Hz, will do just fine. On the other hand, the refresh rate for such a system won’t be as fast even though the human eye may not notice it. For gaming, a 1ms 144Hz panel will provide a smoother experience.

3. Choosing Which Monitors to Buy

If you’re in the market for a monitor to fit your needs, there are certain things to consider. Between a 1ms and a 5ms system, you’ll want to get familiar with some key terms and specifications. This is important, especially if you’re primarily after a gaming monitor.

One of the main features of a great monitor is the screen size. A larger display means you can immerse yourself in the gaming experience because of a nice field of vision. Apart from the higher price you get to pay, a 1ms or 5ms with a larger display will be a little slower. Who’d notice, though?

For this, you want to choose something to sync with your response time and image clarity. A TN or Twisted Nematic panel is affordable and does have low response times. IPS or In-plane Switching panels present an excellent viewing angle and performance. This is no doubt much enhanced with a 5ms built to support color patterns.

A Vertical Alignment or VA panel sits between the two mentioned above. They have the lowest response times with most using 1ms.

Excellent monitors are known to pack the lowest response times. This results in very fast actions with little or absent lag time. A 1ms response time is available with TN monitors while some IPS monitors go with 5ms. In all, if it’s gaming or high performance you’re after, 1ms is ideal for response time.

The higher the refresh rate, the more frames per second (fps) supported by the monitor. This leads to a considerably smoother gaming experience or running programs. Refresh rates of 144Hz and even 200Hz currently rule the market.

Do you want a wider and better view of your game? Find a monitor with a good aspect ratio. This helps to determine the width and height of the display. For instance, a widescreen monitor comes with an aspect ratio of 16:9. For ultra-wide monitors, 21:9 aspect ratios make for great viewing.

A monitor’s viewing angle tells you what angle you can look at the monitor from and still have a clear-cut image. If your 5ms or 1ms monitor has numbers that are closer to 180, you’ll have a better viewing experience. This is the case wherever you stand or your viewing angle.

A 1ms or 5ms monitor with a high resolution means you get to have a sharper and clearer picture. The catch here is that you’ll require a more powerful graphic card, particularly if it’s a full HD monitor. 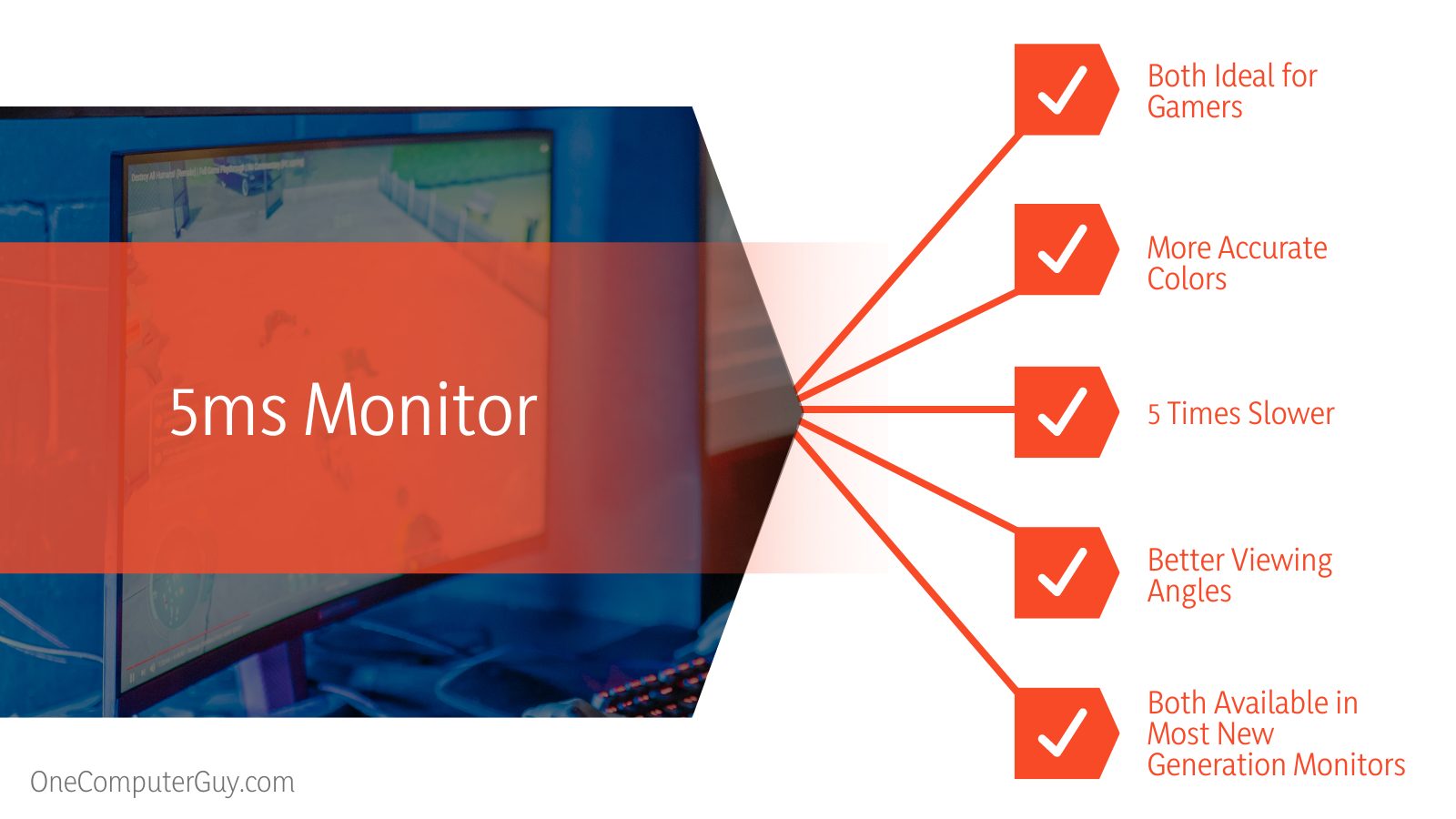 How Important is Your Monitor’s Response Time?

The response time of your monitor can make a whole lot of visual difference, especially when you have a lot of action or activity going on on the screen. It ensures the individual pixels project themselves in a way that guarantees the best performances.

Further, the response time is a measure of how quickly a pixel can display a change from multiple colors. For instance, with more shades of gray, you can have an intense view or feel of any other color on your monitor via a filter. If the gray is darker, less light will go through the particular color filter

With the pixels taking too long to switch between shades of gray, it becomes more visible. If all you do with your computer is browse, this shouldn’t be a big deal.

However, heavy programs and games will definitely require more from your monitor. Poor response times while gaming will lead to avoidable distractions and visual artifacts across your screen. This will happen even with a 1ms delay monitor with a low response time.

For the best gaming monitor or one that serves a couple of heavy uses, you’d want three things: a low response time, a quality refresh rate, and very little input lag. For these reasons, a good gaming monitor will possess a 1ms response rate for better image quality. This also goes for input and lag time.

This is not to say that some balanced monitors don’t come with 5ms. In fact, there are many out there which also have quality refresh rates. Don’t forget other aspects, though, like high-end graphics cards, screen resolution, and viewing angles.

In addition, a G-sync or FreeSync monitor will make a lot of sense for a regular gamer to have. Coupled with a 1ms featured, you won’t feel the need to hold back on the type of games or programs you run. You’ll get a lot of joy playing with awesome visual content and images.