Choosing between YCbCr444 vs RGB can be a bit of a contentious topic. There are a lot of feelings on both sides of the fence and most people just choose the default.

However, is that always the best option?

Our experts break it down and help you understand which one is better. Keep reading this article to see more.

RGB vs YCbCr444: Which Output Color Format Should You Choose?

The way colors are displayed on your monitor depends on the format. A YCbCr digital video signal can be converted into an RGB format if you prefer. However, most modern video displays with HDMI digital inputs will process video signals in the YCbCr format. It needs to convert back to an RGB signal in order to be usable by the imaging control device, whatever that may be.

However, if you are looking to buy a monitor or change your graphics, which one should you choose?

The RGB color spectrum or system constructs all of the colors that you see on a screen from the combination of three colors:

The red, green, and blue use 8 bits each, which have integer values from 0 to 255. This makes a total of 16,777,216 possible colors. Within each pixel in an LED monitor display, there is a combination of these colors.

As of 2007, most computer displays will use the sRGB range. HDTVs will use a similar spectrum that is commonly called Rec. 709. The sRGB space is what most consumer-level products will have. This keeps designing and maintenance easy for everyone from production companies to hardware manufacturers.

However, there are some limitations to it that you need to understand.
For example, there are some highly saturated colors that RGB cannot handle. For more high-quality output, you will need to move to YCbCr 444.

Natively, video signals produced by computers and game consoles will fall into the RGB signal format. This is because their mediums do not benefit from signal compression at the current time.

We call the YUV color recorded digitally YCbCr. Each aspect stands for something different:

In chroma subsampling, the colors are going to be compressed, but they won’t be in luma because the eye is more sensitive to lights and darks compared to color components.
YCbCr has been designated as 4:n:n. The 4 in that designation is the sampling rate of 13.5 MHz. This is the standard frequency for digitizing analog NTSC, PAL, and SECAM.

So essentially, YCbCr represents colors as combinations of a brightness signal along with two colors. The value above work together to create images. During the creation of YCbCr signals from RGB (which is an encoding process), the higher frequency signals are removed to compress the said signal.

This is why YCbCr videos are considered to be “lossless compression” as the elements of RGB are removed. Now, most people won’t be able to see

There are a few different types of devices that will use YCbCr format digital video signals, including RG turners, cable boxes, satellite boxes, DVD players, Blu-Ray players, and more. They do this natively because they have a limited bandwidth transmission and storage mediums benefit from the compression they are capable of handling.

It’s used mainly in printing presses, color design, and other types of art items because of the better range of colors and contrast possible with Yellow, Cyan, and Magenta, compared to Red, Green, and Blue. However, this is usually only used in in-person items rather than display items.

It is difficult to compare RGB and YCbCr because they essentially work together and monitors know what to do with them. However, there are a few areas where we can compare them:

In Gaming, Should I Choose YCbCr or RGB?

Most gamers stick to RGB displays because it helps to show off darker scenes and brighter scenes. You can more easily play gamers for a longer period of time because this color puts less strain on the eyes. However, there are some newer monitors that use YCbCr that have a blue light.

One thing to note is that human retinal receptions respond to light energy in a very specific way: they spot the red, green, and blue light components. Often, the blue light is the most significant form. RGB light control is the best option for imaging display devices.

This is why there is a need for a color coder at the end of a display’s processing path to push the color signals from the YCbCr color space so that it is in the RGB color space. This makes it the best option for presenting on any device that displays images.

A color decoder is a tool used in more modern video displays to take the YCbCr signal and produce a digital RGB signal. What this decoder does is add the luma channel (in the correct proportions) in order to recover the original Blue and Red signals that were eliminated. The tool automatically corrects these proportions and then subtracts from the Y luma to recover the original Green.

Note: the proportions of the RGB colors are different for different displays. In general, they fall into one of two categories: ITU-R BT.709 HDTV and the BT.601 SDTV. They fall into different luma encoding formulas:

These codes aren’t something you will have to worry about unless you are going to recode your display, which is something even the most advanced builders won’t do. Most displays will instead switch to the appropriate color decoder without any input needed.

Other Display Option: Color and Tint

Two other color options to take into consideration are color and tint. These are important in both YCbCr and RGB formats. They correct for analog signal level errors in older devices and in more modern devices, don’t do much at all. Modern devices don’t have problems with hues like older monitors do and they don’t need the correction that color and particularly tint offer. Unfortunately, these are mostly used as marketing gimmicks for another “feature” to distract.

Now, it is interesting to note that most displays and monitors are designed with white skin in mind, so people who play games or watch entertainment where the main characters aren’t white may actually benefit from changing tints.

For those who play games frequently or make their own content, it can become important to control the color for the best performance. When we talk about “controlling color,” we are usually talking about the saturation in the Cb and Cr chroma channels.

This is what makes colors appear brighter or duller, depending on the settings. This is found in the Picture menu on most PCs. Again, this isn’t a setting that most people will ever use.

Conclusion: Should You Choose YCbCr or RGB?

Essentially, most people won’t have to make the choice between YCbCr and RGB because the devices that we use already make that choice for us. Allow your devices to stay on the RGB setting because it helps to show off images better and it is what gets used in the game creation process, video editing, movie editing, and more.

While there are situations in which you’d want to use YCbCr color space, most people won’t encounter them. If you do have the choice to make the switch, it is best to just leave things as they are.

How to Use Stereo Mix on Discord

What Is GPU Scaling & Should You Use It?

One Computer Guy - November 26, 2020
0
The Sceptre E255B-1658A is the perfect gaming monitor. It has a high refresh rate, attractive design, and AMD FreeSync support. Gaming monitors must meet... 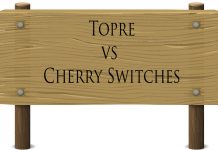 A Comprehensive Review of the Best Membrane Keyboards