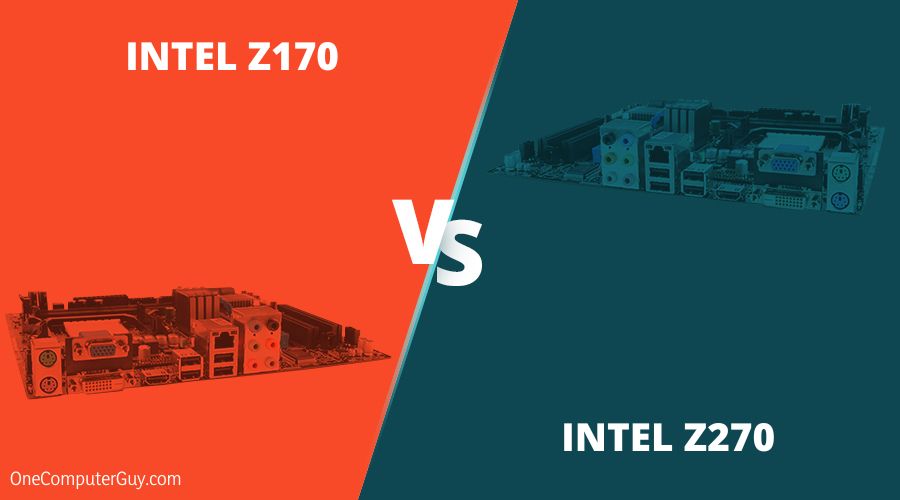 The Z170 and Z270 chipsets are each designed to work with specific Intel processors and operate with later models through firmware updates. Different motherboard manufacturers will advertise which chipset the board uses so the consumer has a basic idea of the capabilities of the board.

Below is the Intel chipset comparison between the Z170 and Z270 with which processors they support, their PCI lanes, USB compatibility, and memory support.

Details of the Intel Chipset

An Intel chipset like the Z170 or the Z270 chipset is a set of components on motherboards compatible with Intel brand processors. The “chipset” refers to an architecture of more than just one chip. Specifically, the Intel chipset consists of two: the northbridge chip and the southbridge chip.

These chips control communication between the major components attached to the motherboard such as the central processing unit, memory, graphics processing unit and peripherals.

The northbridge is sometimes referred to as Graphics and AGP Memory Controller (GMCH) on some Intel machines. The northbridge works in tandem with the graphics card to take some of the weight off the processor when executing high-demand operations associated with video editing and gaming software.

The northbridge chip also links the processor to the Random Access Memory (RAM) modules installed on the motherboard. This connection provides the processor with necessary data it requires to execute the instructions needed by any application in use. The main pathway between these devices is called the “front side bus” and the northbridge chip synchronizes the operation of all these components by controlling the front side bus.

Unlike the northbridge, the southbridge—which is also called the I/O Controller Hub (ICH)—is not directly connected to the processor.

Southbridge synchronizes the function of slower hardware devices to communicate with the northbridge chip as needed by the demands placed on the system due to software running on the computer.

It is similar to PCI express, creating multiple differential lanes of traffic.

Not all configurations of DMI are supported, so the presence of DMI does not automatically mean that all combinations of northbridge and southbridge are valid.

The chipset is the most limiting factor in a computer’s upgrading potential. The chipset determines what models and speeds of CPU can be installed on the board.

The chipset determines the type and amount of RAM that can be installed. It also dictates the user’s options in terms of graphics cards, sound cards and number of USB ports. Both the Z170 platform and Z270 chipset have integrated graphics as well as the ability to add a separate GPU expansion card on the board.

Intel’s Rapid Storage Technology allows for the use of more than one hard drive to be treated as a single disk for redundancy. RAID (Redundant Array of Independent Disks) volumes 1, 5, and 10 all allow for this redundancy to prevent data loss.

Certain Express chipsets allow users to enable and disable individual USB ports and SATA hard drive ports. This feature helps prevent malicious use of USB ports and the unauthorized addition or removal of data to or from the hard drives.

Drivers available for download from the Intel website support Sky Lake, Kaby Lake, and Kaby Lake R processors on both the Z170 and Z270 chipset in order to make sure the processor operates appropriately on the motherboard.

The Z170 motherboard will require a BIOS update in order to run any of Intel’s 7000 series processors because the architecture does not natively support them. It is worth noting that in the manual for a motherboard utilizing the Z170 platform, it is highly recommended that the user not attempt a BIOS update by themselves as this could result in unintended consequences to the system.

Unless you know what you are doing, do not attempt to update the BIOS on your own to take the Z170 and make it work with the 7000 line of processors available from Intel. Please enlist the help of a qualified computer professional before you attempt to modify your BIOS because it is necessary for controlling the rest of the computer system and will cause issues including a failure to boot if performed incorrectly.

The extra four PCI-E lanes on the Z270 does not pose a significant increase in performance or advantage in capability unless you are using more than one external graphics card and PCI-E SSD’s all at the same time. The Z170, however, sometimes encounters issues with the PCI-E lanes whereby utilizing one will disable another, and the extension of the lanes in the Z270 helps overcome this limitation.

Four more PCI-E lanes also open the door to having multiple native M.2 slots. Until recently M.2 has seen relatively light adoption, but the new Samsung 960 EVO and Pro drives are much faster than standard SATA SSDs and are actually fairly cost-competitive. Projections of these new drives on the market make the possibility of multiple M.2 slots on a Z270 motherboard very attractive.

Because this is a newer chipset for use with Intel 6th and 7th generation processors, both should easily run with DDR4 memory, which is the most advanced current standard of random access memory available to be installed on modern computers.

Before purchasing RAM for the computer you intend to build, select your processor (compatible with either the Z170 or the Z270 chipset) first and use that benchmark to determine the type of RAM you should use to make the most of your processor’s capabilities.

Aside from the extra PCI-E lanes available on the Z270 platform, the only other real change is support for Intel Optane Technology. While the Optane drive should be able to be used as a normal storage device in Z170 (also H170, X99, and really any other modern chipset), this refers specifically to the use of an Optane drive as a temporary cache which is supposed to improve file access times.

This functionality is similar to that of utilizing a small SATA SSD for increasing read performance of a spinning disk drive via caching with Intel Smart Response Technology. This technology uses the much faster Optane drives and they connect via PCI-E instead of SATA.

Both chipsets support CPU overclocking and Z270 has the same number of native USB or SATA ports as the Z170 platform. As far as their additional feature sets, both Z270 and Z170 support Rapid Storage Technology and Smart Response Technology (otherwise known as SSD Caching).

The overall difference in specification and performance between the Z170 and the Z270 chipset technologies by Intel are minor in the grand scheme of computer technology. Extra PCI-E lanes are a nice feature to have in the event you use several peripherals all in need of the PCI-E, and though the Z270’s native support for Intel Optane could potentially be significant to some users in the future, there has not yet been any real-world testing done by 3rd parties to determine how and when this functionality will be useful.

While there is not necessarily anything wow-worthy about the change between the Z170 and the Z270 chipsets produced by Intel, it is important to keep in mind that the launch of a new chipset provides the myriad motherboard manufacturers (ASUS, EVGA, ASRock, GIgabyte and others) with the opportunity to take the improvements offered by the Z270 and improve to their own current product line.

So, yes, the introduction of the Z270 by itself isn’t overly exciting, but we have already observed a number of great new improvements on the motherboards which implement the Z270 chipset such as reinforced PCI-E slots, multiple M.2 slots, and increased adoption of Thunderbolt 3. Now we can only hope that a wider portion of the population utilizing the Thunderbolt solution will help resolve the driver and firmware issues Thunderbolt currently has when used with PC instead of Mac.

These are still minor, and still not anything immediately changing the status quo with Intel chipset technology. The extra lanes and processor support are unlikely to warrant an upgrade from the Z170 to the Z270 on their own, but Z270 does still provide some small and welcome improvements. If you are already in the market to build or buy a new system, there is little reason not to go for the Z270 because it allows for better motherboard technology.