Before we delve into the Shr vs. Shr2 battle, it is important to know the great impacts of this array of independent disks when it comes to safeguarding your valuable data in a Hard Drive enclosure. 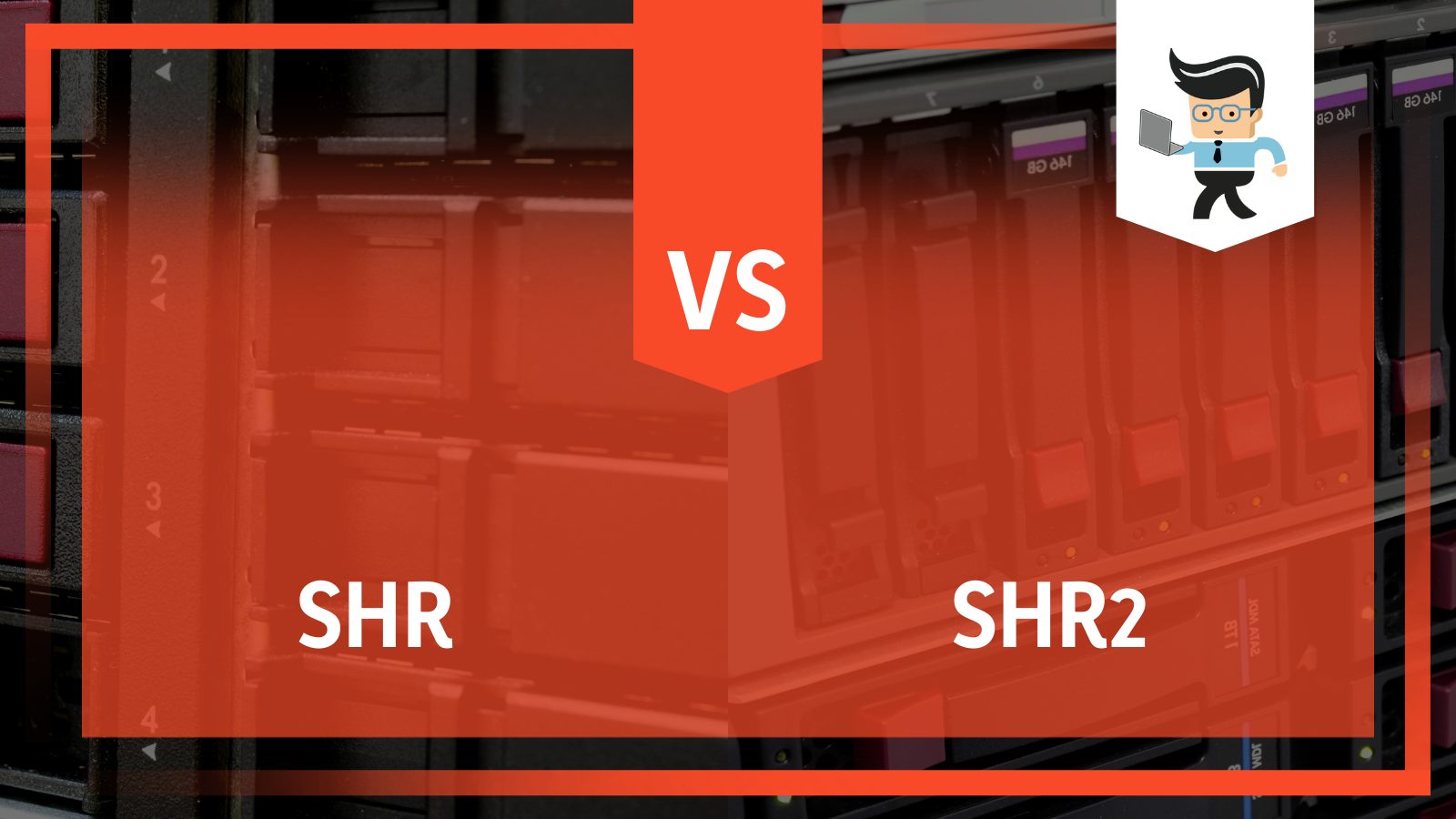 SHR is designed with the newbies and less technicality inclined in mind, as it provides a quick and automatic method of protecting their data from hardware failure.

Notably, there are only two different types of SHR available. In this article, we will compare the two versions, taking note of their specifications, prominent features, and downsides. Read on!

Shr vs. Shr2 Specs Comparison Table at a Glance

Synology NAS servers uniquely feature a proprietary RAID setup called Synology Hybrid RAID or Shr. This is an automated storage management system that is much similar to standard RAIDs. For example, when you use two drives, it operates like RAID 1.

However, with three or more movements, SHR is now identical to RAID 5. When you have four, or more, you have the option of using SHR-2, which is similar to RAID

You can access this OS through its web interface like that of a router. However, within the web page, DSM behaves like any other desktop OS. You will find a start button, a desktop, a taskbar, and a control panel.

When working with this DSM, it’s also possible to open and rearrange multiple windows, log in, and log out as different users, etc., including for transitional effects.

Further, with Shr Synology raid types, you typically get one disk of fault tolerance and a bit of flexibility because not all your disk needs to be the same size. If your data is critical to you, you will like the protection on offer here. They extend to the disks too. As such, no two disks fail at the same time.

The shr meaning extends to how it operates as a real server and still provides many services, including serving content to streamers, hosting personal cloud storage, or a backup destination. It can also work as a mail server, running virtual machines, and a lot more, all at the same time. 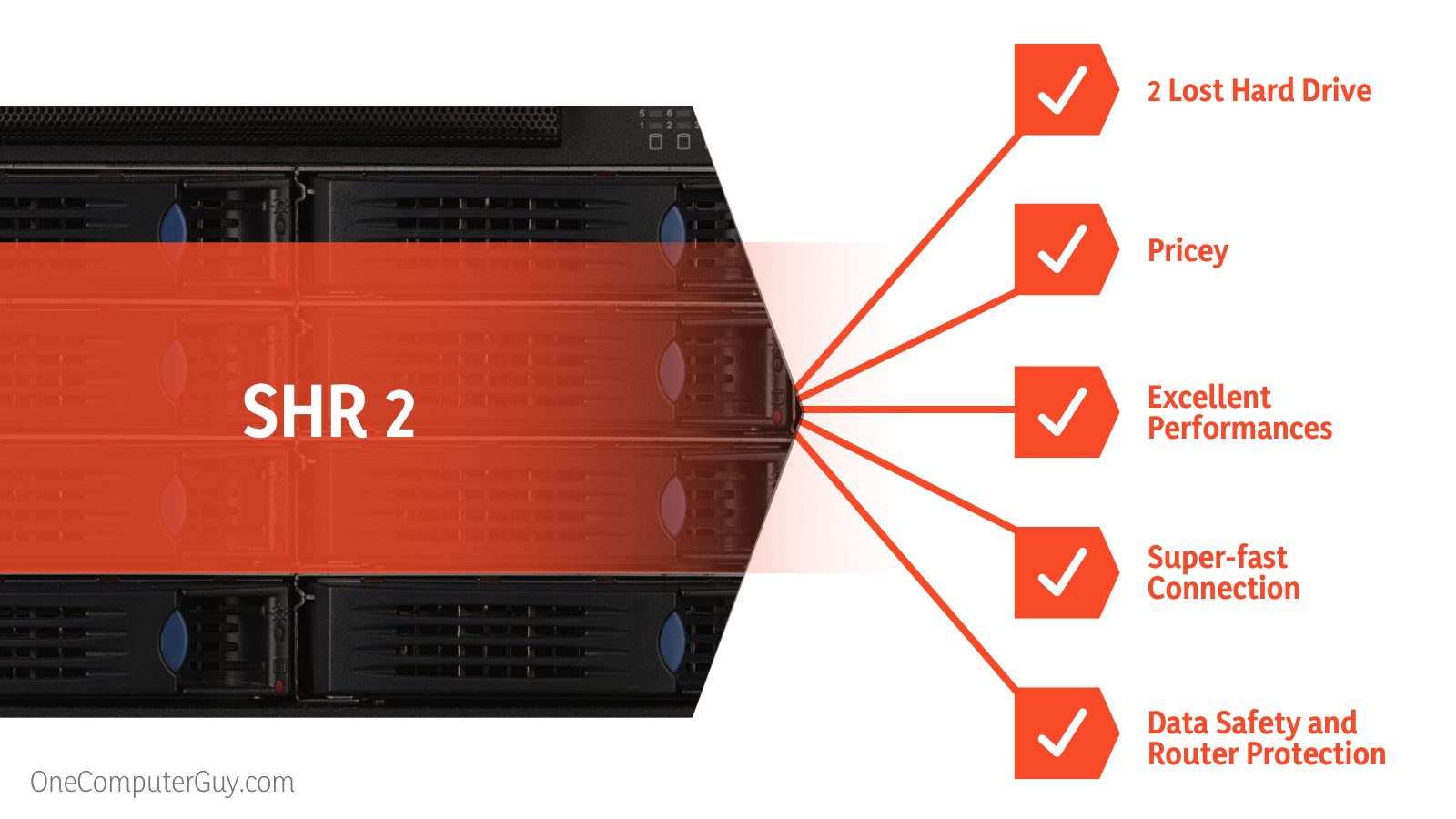 Synology Shr2 has a reserve of two drives for redundancy, similar to RAID 6. You should also note that you can start with SHR and upgrade to SHR-2 later, but you can’t do the opposite.

If you’ve used the Shr2 for years, you’ll have noticed the excellent performance it delivers. The fact is you can compare its standard to that of the RAID. The best part? It is powerful in terms of data safety and protection.

On the other hand, if you’re looking for raid differences, you can observe how they recover from failed/replaced disks quickly. That is because the double parity can restore a single failed disk faster. As such, there is less rebuild/recovery time.

Shr-2 is faster, and the connection is excellent even over a long distance. That means at a considerable distance, and you still get to use the Internet without moving your router.

The main difference between Shr and Shr2 is, Shr2 offers more protection to users, while Shr writes faster.

A shr shr-2 comparison article is not complete without talking about the protection they both offer. Both do well to guard your data and router connection. However, the latter edges it because it offers more protection to users. Your data and other things you do over the Internet connection gets excellent protection.

It is no secret that both these routers offer additional storage capabilities to users. As such, you get to have the best of both worlds. Much like a raid speed comparison, these routers are up there with striking qualities and features.

When asking which of the two perform faster, it’s actually quite hard to tell as they are almost identical in performance in the long run. However, if that is a real concern for you, choose SHR-1 as it does write faster than SHR-2. One thing you have to take note of, though, is that after a few drives, speed no longer becomes a concern as it balances out. Nonetheless, if that tiny boost of speed makes an impact on your usage, opt for SHR-1.

Difference Between SHR and Ordinary RAID

When it comes to storing and protecting your data in a hard drive enclosure, you can always trust SHR and RAID to do the job for you. Even though they pretty much serve the same purpose, they also differ in their usage, which makes one better than the other. 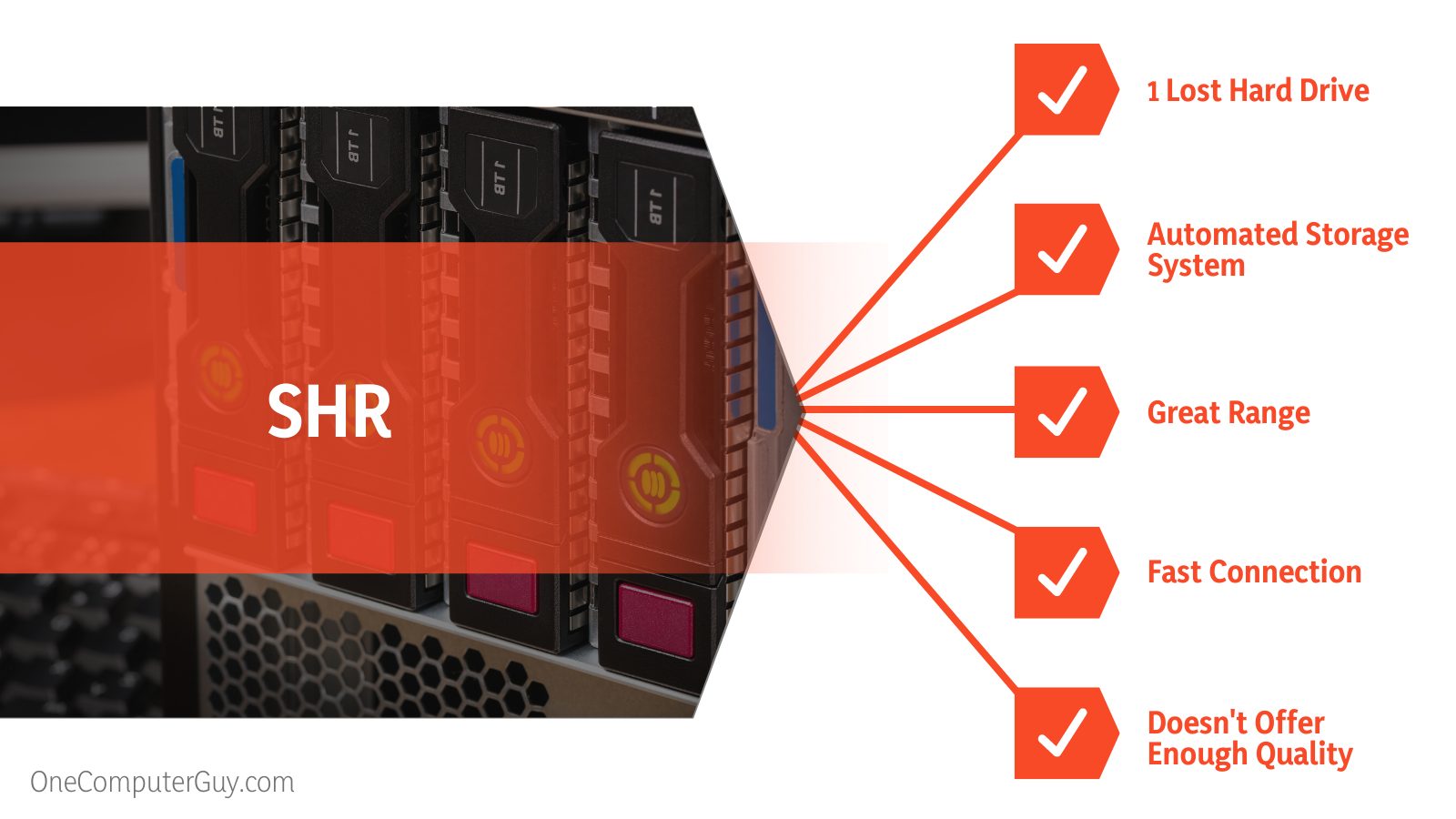 Therefore, if you’re indecisive about the best device to pick between SHR and ordinary RAID, this article will help you out, as we comprehensively explore what they’re all about to enable you to make your best pick.

– What Is SHR All About?

SHR is an acronym for Synology Hybrid RAID. It is a very automatic RAID choice that has been specially designed for those who are less technically minded to help protect their data from hardware malfunction while preventing them from dealing with complex matters like parity and striping.

It is equally more scalable than traditional RAID and quite easy to install. SHR has a lot of interesting benefits when it comes to deployment speed and maximum available capacity.

And unlike ordinary RAID, SHR doesn’t arrive in many types, but in just two different versions, which are; SHR and SHR-2. When it comes to SHR, you have the ability to protect your data from 1 lost HDD or SSD, while SHR-2 gives you protection from losing two HDD or SSD.

• The Synology can still access the full volume data if one drive fails.
• It’s easier to set up.
• Ability to mix drives.
• It’s quite expandable.
• It has a larger available capacity when mixing drives while equally maintaining 1 disk of redundancy.

One major downside you will notice here is the fact that you will have to format the drives in an SHR RAID before installing them in a new non-SHR NAS. Also, SHR is equally as fast as the RAID 5 and 6 in terms of speed, but it is slower than the original RAID.

– What Is RAID All About?

It’s an acronym for Redundant Array of Independent Disks. It’s a way of combining many smaller disks together to create a larger storage volume, with redundancy being the secondary priority.

However, the increase in the size of storage devices over the years means the major function of RAID has shifted towards data protection.

Unlike SHR, RAID is available in multiple forms, and they include; JBOD, which means— Just a Bunch of Disks—it’s not a RAID per se, RAID 0, RAID 1, GIANT, RAID 5, and RAID 10.

• It has better Read and Write speeds.
• It’s not only limited to Synology.
• It has wider options for deployment.

RAID’s biggest downside remains the inability to access or recover any form of data after a hard drive failure, with RAID being the only exception.

If at all you are going to get anything, you have to install a new drive. Also, it takes longer to create a RAID array here, which is something that is incredibly fast when using SHR.

1. Is it possible to switch from Shr to Shr2?

At the moment, you cannot switch from SHR to SHR2 or vice versa. When you extract a disk from the first volume and merge it with up to three different disks while creating a second expandable volume, all installed packages will be gone forever once you transfer data from the old volume to the newly created volume.

2. How reliable is the Synology Hybrid RAID?

No other RAID comes close to SHR when it comes to data protection and reliability. Its unique method of combining different drive brands is second to none, and it comes in handy during power failures.

Overall, both SHR1 and SHR-2 have shown great capabilities to safeguard and protect valuable data in a Hard Drive enclosure without going over the top. However, real-life usage has proven that the choice of SHR-1 vs. SHR-2 for every individual boils down to a few factors.

When it comes to writing speed, SHR performs slightly better than the SHR-2, as it is better optimized for a one-disk redundancy system. You can bank on it if you are trying to store and protect your data in a few Hard Disk Drives.