GPU comparison between NVIDIA graphics cards and Radeon graphics cards is often an unfair pairing, even when the GPUs are from the same generation of processors. The NVIDIA cards tend to exceed the Radeon cards in terms of memory speed and graphics processing units. 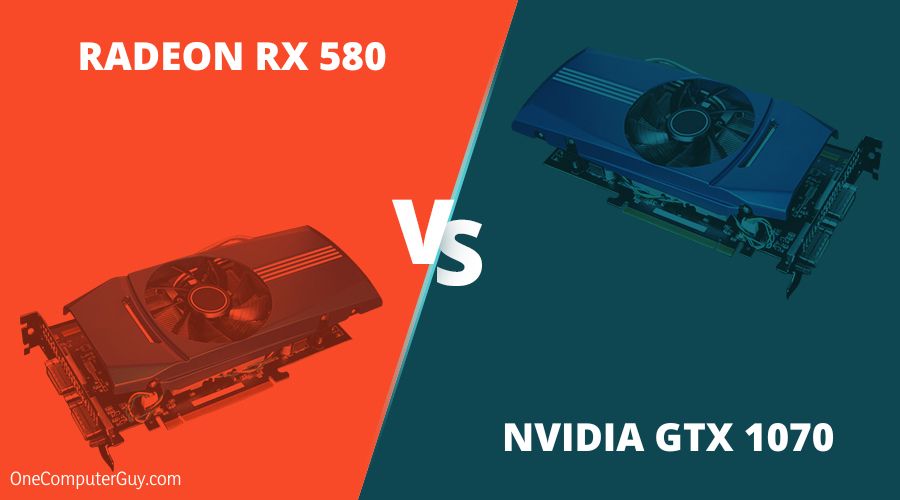 The NVIDIA GTX 1070 is one generation newer than the Radeon RX 580 and follows this same pattern. The RX 580 is a significantly cheaper card than the GTX 1070, which is an important deciding factor for many people when selecting their graphics cards.

Whether the intended application is gaming, crypto mining, or high-demand video applications, the RX 580 and the GTX 1070 each have their strengths and advantages in different scenarios.

A few things to keep in mind with this comparison:

The Radeon RX 480 came out less than a year prior to the RX 580, and one of the reasons that AMD got the RX 580 to market so quickly after the 480’s release was as a direct competitor to the NVIDIA product of the time, the GTX 1060, which had just moved from the 28 nm silicon architecture to the 16 nm new technology with their Pascal line.

Even though the Radeon RX 580 specs are lower than those of the 1060 it competed against, it routinely provided higher framerates and speeds compared to the 1060 card. The GTX 1070 outpaced both of them when it arrived on the market and to this day retains a higher market share than the RX 580.

Next we will take a look at some of the key benchmark metrics from the RX 580 and why it is a good graphics card.

Even several years after its release, the RX 580 can hold its own in the midrange graphics card market. Even though it has a smaller market share than the GTX 1070, it is only by a fraction, coming in 0.2% behind the GTX 1070. 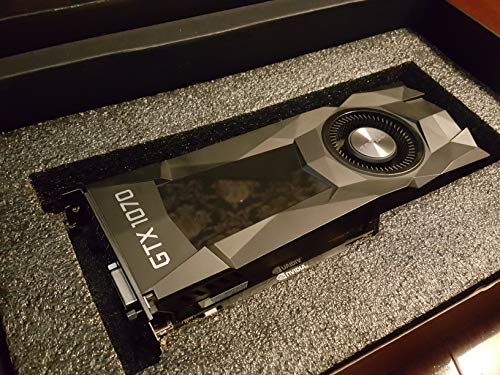 The NVIDIA GeForce 1070 card comes in at 35th out of 635 results in the Passmark scores, superseded primarily by later NVIDIA models and some of the Radeon RX Vega cards.

The GTX 1070 hit the peak of its market value in February of 2018 when it reached almost six hundred and eighty five dollars. This spike in value was immediately following the significant drop in the value of bitcoin at the end of 2017. Part of the reason for this is the fact that the GTX 1070 is a good candidate for mining cryptocurrency, which is discussed in a later section.

The GTX 1070 benchmark consistently outperforms the RX 580, some highlights of which are summarized below and then compared to the RX 580 in the section thereafter.

In order to make the most of your investment, you have to choose one of the best mining GPUs, if you’re thinking about delving into mining cryptocurrency. The drop in popularity by no means is an indicator that it’s dead. Bitcoin, Ethereum and other crypto coins are still flowing, while others are booming, which means that there’s still a demand for mining GPUs.

When you go shopping for the best mining GPU, it is a balance between memory, power requirement, and upfront cost. It’s important to consider the value of the GPU, because when you start mining, you won’t be yielding large amounts of cryptocurrency to start. Minimizing your initial costs as much as possible is ideal.

You don’t want to go out of your way to buy a very expensive graphics card, only to give up on mining shortly afterward and sell off the card at a discount when you can’t make enough to break even because you were told that crypto mining is like printing your own money.

Make sure that the card you get has enough memory to handle the mining operation, has a power requirement low enough that even when running at full capacity mining it will not drain your profits when you have to pay the power bill, and has a low enough upfront cost that you don’t spend too much time trying to earn back your initial investment before you start to make money.

Keeping price and efficiency in mind, the NVIDIA GeForce GTX 1070 and the AMD Radeon RX 580 are both good candidates for crypto mining.

The Nvidia GeForce GTX 1070 is a great graphics card for gaming, but it’s also an excellent mining GPU. The GTX 1070 maintains a high hash rate of around 30 mh/s without needing too much power. The more power a GPU requires, the more expensive it is to run. The more power you use for mining, the more you will eat into your cryptocurrency profits. The GTX 1070 has only 150 Watts TDP compared to the 185 Watts TDP of the Radeon RX 580.

As with many recent Nvidia GPUs, the 1070 is on the pricey side, so you will have to take an initial hit when starting up. If you’re planning to get into cryptocurrency mining for the long run, the 1070 is easily the best mining GPU currently available by balancing specs, price, and power requirements.

The AMD Radeon RX580 is another one of the best GPUs you can use for mining, so much so that it has become a bit of a victim of its own success. Because the RX 580 is so good for mining, it can sometimes be difficult to find.

The card’s popularity is well earned. It offers an excellent hash rate of 29 mh/s while also keeping the electricity consumption low. It is cheaper overall than the GTX 1070, and if you don’t mind changing some of the settings of the care, you will be very pleased with this card performance.

It does, however, have a TDP that is higher than the GTX 1070 by 35 Watts. This means that at full capacity, the RX 580 card will consume almost a kilowatt more per day than the GTX 1070 will. Depending on your location and the amount of mining you do, the result of this power difference could add up to serious profit losses over the lifetime of the mining operation.

Overall, regardless of what application you intend to use the graphics card for, whether it is gaming or mining cryptocurrency, the GTX 1070 is the better card.

The 1070 has significantly higher benchmark numbers and lower power consumption, meaning the drain on the system is lower.

Because the RX 580 was created as a direct competitor to the GTX 1060 and the GTX 1070 is the next NVIDIA generation, it should come as no surprise that the NVIDIA GTX 1070 is the clear winner, and if you want an AMD graphics card that will exceed the GTX 1070, you need to upgrade to a better card like the Radeon RX Vega 56.