Are you stuck with the rt-ac5300 vs. rt-ac88u debate? Read on to understand as we break down the features and strengths of both routers. Our team of expert reviewers sat down so you can arrive at a better choice. 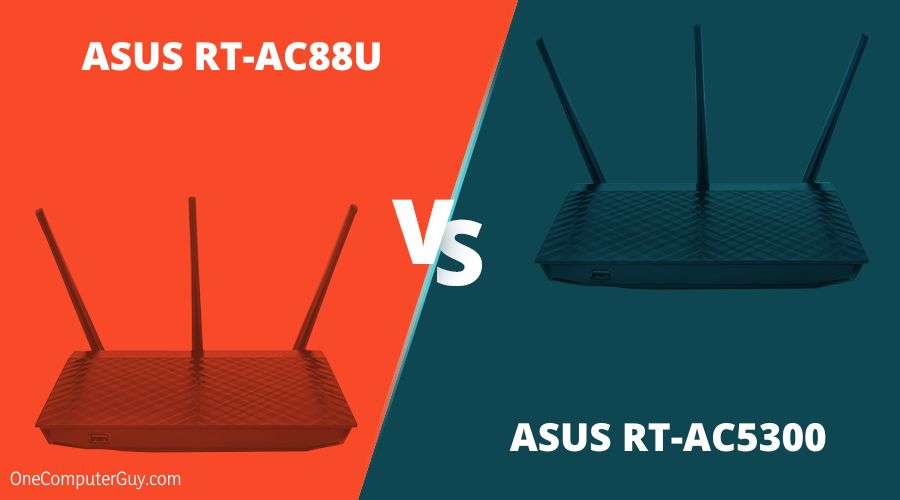 The rt-ac88u and rt-ac5300 make good wireless Wi-Fi Routers, especially when you consider that they both come from a brand known for making wireless devices and accessories.

That is not all, though. While both routers share some similarities across the board, they also offer some unique features that will meet some users’ specific demands, majorly in the area of connectivity and network coverage.

You get a dual-band from both of them, which guarantees longer ranges and speedy connections. That’s very important if you must have a swell time play games online and streaming video content.

Besides, they both have robust and reliable antennas to keep you connected. It’s just that the rt-ac5300 has eight in comparison to the three found on the rt-ac88u.

Both of these routers also feature a raft of ports that gives them a host of options to connect to different networks. Therefore, you can have access to Gigabit Ethernet connections to share further and boost network connections.

A closer look at both products will help you appreciate their unique features and capabilities. Let’s begin and learn more about these devices below. 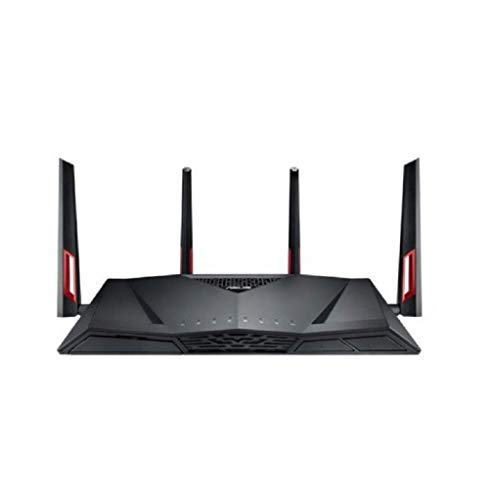 To get things started on the Asus rt-ac88u review, we have to mention that it is one of Asus’s latest actual dual-band routers. It’s the first home router with up to eight Gigabit LAN ports that provide more support for Dual-Wan since you can convert one of the LAN ports.

That combination instantly transforms into a single Super-fast connection. The rt-ac88u also has a robust and fun-to-use Web interface. There are also excellent network-monitoring features, a built-in VPN server, and the ability to protect your home network from malware and intruders.

What’s more, this router supports the MU-MIMO feature alongside other unique features for gamers. The router is more than capable of delivering top Wi-Fi data rates, long-range, and a stable wireless signal when it comes to performance.

If you’re looking to get a decent home router with little drawbacks, you can seldom do better than the RT-AC88U. However, it’s not the cheapest out there by any margin. The value you get is worth it, though.

The Asus rt-ac88u specs also include the Broadcom NitroQAM chipset, which is the same chipset used in the RT-AC5300. However, it doesn’t have the additional 5 GHz band, otherwise available on its AC5300 sibling.

The rt-ac88u runs on a 1.4 GHz dual-core processor and comes equipped with 512MB of system memory and 128MB of flash storage.

The Asus rt-ac88u delivers top speed and stable wireless signal without going over the top. If all you want is an excellent home network that can also cover a great deal of office space, this router should appeal to you.

Any rt ac5300 review will point out that this router comes designed for homes in need of maximum bandwidth for a smooth and seamless online gaming experience and 4K video streaming.

Sure, it is oversized, but the immense size helps create space for top features like the 4X4 data transmissions, game-enhancement options, and MU-MIMO data streaming (Multi-User Multiple Input, Multiple Output), and much more.

There’s also a wealth of management settings users will appreciate. It’s effortless to set up and use and turned in very respectable scores in our throughput tests. While it is not precisely the best-in-class router from ASUS, we think it’s incredible to have. However, it will take up a lot of desktop space, but not as much as other routers.

In this Asus router comparison, we have to note that the rt-ac5300 router has eight removable and adjustable antennas. The front edge also includes LED indicators for Power, WAN internet activity, 2.4GHz and 5GHz band connectivity, and WPS activity.

On the left of the device is a USB 2.0 port and buttons for enabling and disabling the LEDs. The buttons can also be used to control the Wi-Fi bands and for initializing the WPS security feature. Besides, there are four Gigabit LAN ports, a WAN port, and a USB 3.0 port at the back.

A 1.4GHz dual-core processor resides inside and powers this router. It’s a device that delivers 1,000Mbps on the 2.4GHz band and 2,167Mbps on each of the 5GHz bands.

The rt-ac5300 is a 4X4 router, which means it uses four individual streams to deliver and receive data. It will also support beamforming, sending signals directly to clients, and Smart Connect. The MIMO feature helps you stream multiple contents at the same time.

The main difference between RT-ac88u and RT-ac5300 is, Asus RT-ac88u is ultra-fast reaching up to 3167 Mbps for low-latency online gaming, while RT-ac5300 lets you use it across vast spaces.

The rt-ac88u and rt-ac5300 have typical setup processes that give both routers a unique and dynamic Web interface. You can plug the router in and point a browser from a connected computer to its default websites to connect to both.

For the rt-ac88u, a web-based wizard will walk you through the device’s configuration settings, especially when you are about to create a password for the interface itself and the Wi-Fi networks.

After the initial setup, you can use the interface to manage other aspects of the router. The interface in both routers is among the best we’ve come across. The rt-ac5300 and its counterpart feature a well-organized and self-explanatory system.

A fast network and internet speed is a welcome development anytime. We can describe the Asus rt-ac88u speed as an ultra-fast 802.11ac dual-band Wi-Fi router with boosted speeds reaching up to 3167 Mbps for low-latency online gaming, smooth 4K UHD video playback, and extremely fast file-sharing.

On the other hand, the rt ac5300 range offers solace to those who use it across vast spaces. However, an essential factor many users look out for is connection speed. That’s why we’ll stick with the rt-ac88u here.

Security is a vital consideration, no matter the level of activity you do via the Internet. As such, it’s crucial to ensure your network is safe from attacks over the inter Internet by keeping your router secure.

That’s what both the rt-ac88u and rt-ac5300 do with features that help you keep attacks from malware and intruders at bay. Since your router directs traffic between your local network and the Internet, you need to take steps to keep it safe.

For example, it’s wise to change the default password, make it difficult to duplicate, and use firewalls to keep your router safe. That way, no sensitive information gets out.

The Asus rt-ac5300 and rt-ac88u Wireless Gigabit routers come in handy for users looking to get a decent throughput for their high-resolution video streaming and online gaming activities. While the former is physically large and takes up some space, the latter is lighter, but both are excellent with the network provided.

They both cost some money, and they deliver very fast 2.4GHz and 5GHz throughput and feature quality capabilities like the MU-MIMO.

However, it’s our opinion that rt-ac88u is much better and suited to your online needs. Its ultra-fast 802.11ac dual-band Wi-Fi router will come in handy for gamers and heavy streamers, and its high-speed file-sharing capability means you can do more online.

What’s more, the device’s management settings allow you to optimize your network traffic for optimal streaming and gaming performance at all times.