There are often questions about the Radeon WattMan crash in community forums. These include the Advanced Micro Devices (AMD) website and Steam, and other sites popular with gamers. Users of  AMD graphics processors (GPUs)  playing popular 3D games like

“Battlefield Bad Company” and “Tomb Raider” sometimes use Radeon WattMan software by Advanced Micro Devices (AMD). They do so to adjust limits on GPU execution speed, the increased voltage required, and the elevated temperatures and cooling fan speed that result. 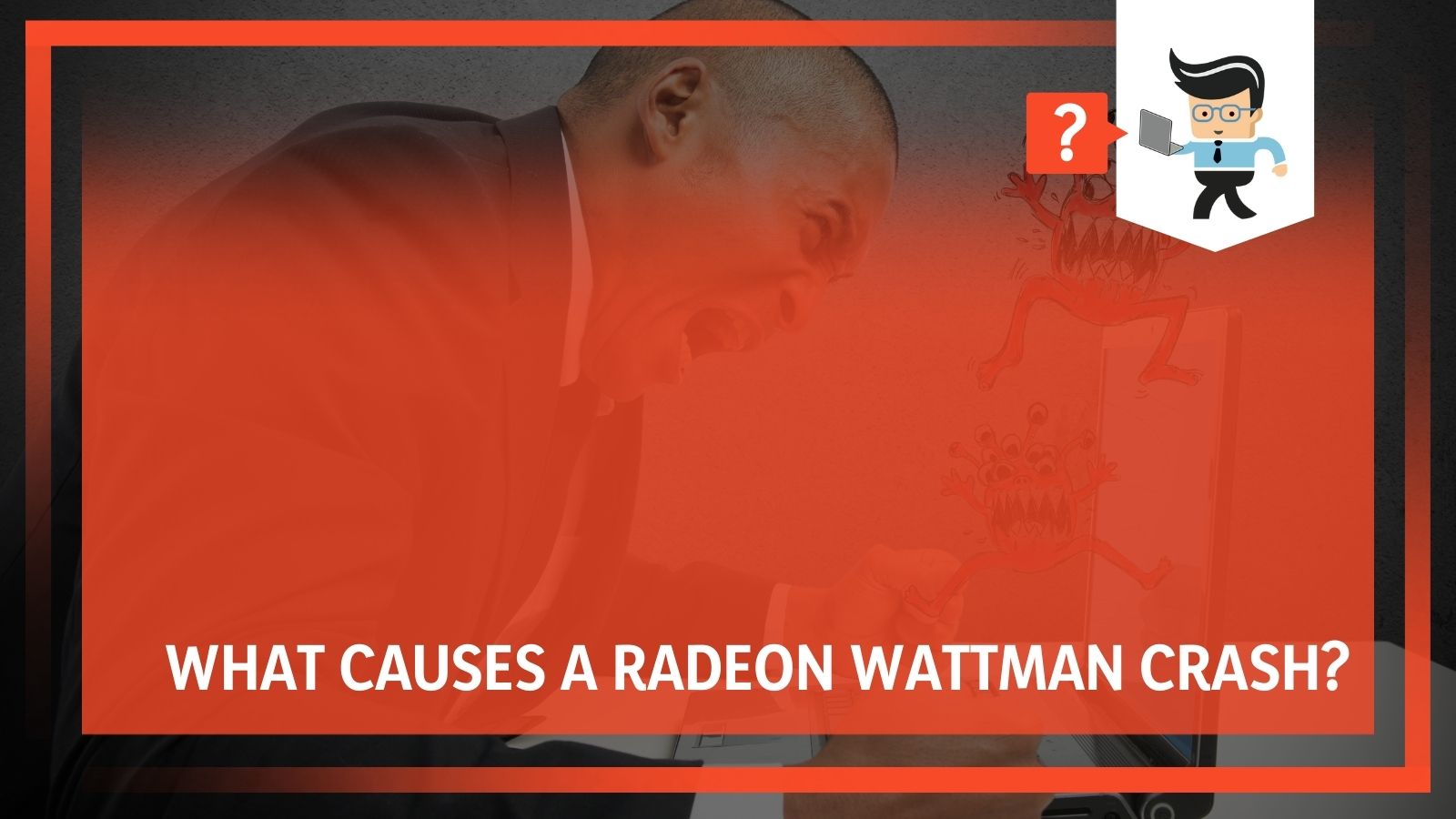 Finding the settings that make the game enjoyable takes time. When WattMan settings keep resetting to default values because a GPU driver has crashed, gamers find this annoying.

The most frequent question by far is how to avoid this event. The answer is not constantly changing the WattMan overclocking settings. According to AMD, there are other things that you may need to check in your system. When WattMan settings keep resetting, the user may have neglected Windows updates or have other problems.

What an AMD WattMan Crash Does

The term “crash” is frequent in our computer-dependent era. It doesn’t always mean the entire computer shuts down. An “AMD WattMan Crash” is when a driver in one graphic card (GPU) that  AMD Radeon WattMan software has adjusted abruptly stops running. This may have adverse effects on the whole computer: it may “freeze” without going completely blank, or it may shut down. This does not always happen.

Sometimes, a Radeon WattMan settings reset only causes the monitor attached to the graphics card to go blank. You see a display with this message: “Default Radeon WattMan settings have been restored due to unexpected situation.” Sometimes the computer has to restart to get the GPU driver running again. The message may not appear until after doing that.

WattMan is a new feature of AMD’s Radeon software with detailed histograms and graphs showing fan speed, clock speed, input voltage, and temperature for your video card or graphical processing unit (GPU). The user can set both global overclocking parameters for a GPU and individual profiles for different games. In a CrossFire setup with more than one AMD graphics card, WattMan must establish each GPU’s global settings. 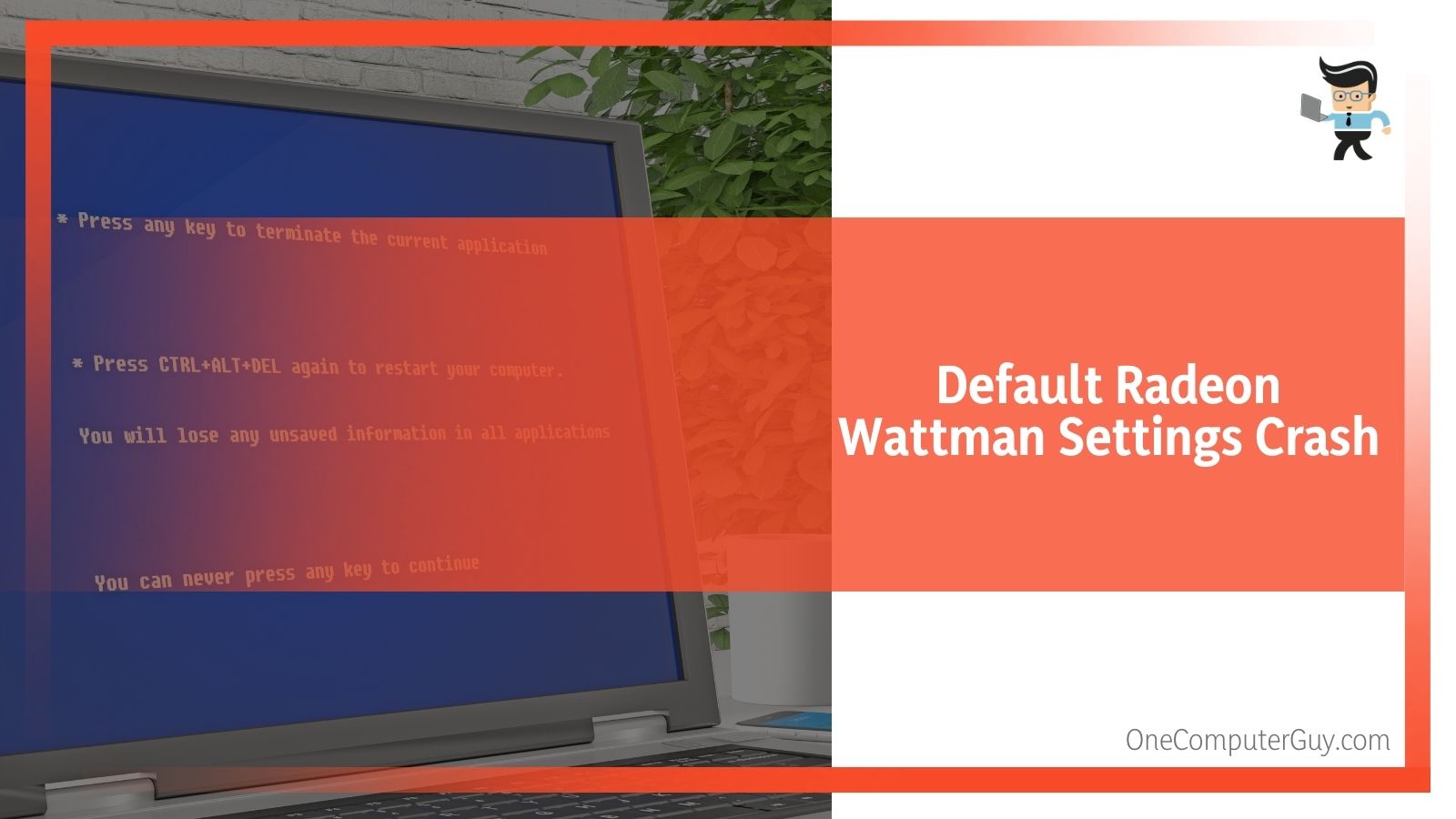 AMD made Radeon revert to default settings after closing a game. It puts the GPU back to its normal limits until the next session, which may be a different game with its profile. It also restores the system to its typical characteristics when not gaming. The problem is that this reversion to default values also occurs when the graphics card’s driver crashes during the game, known as a WattMan system failure.

Sometimes this happens just after the game stops, and the screen goes blank, but sometimes it doesn’t happen unless the user restarts the PC. If a profile was set up and saved before launching the game, this may not be so bad. Otherwise, the entire set of overclocking parameters may be redefined. To a gamer intent on returning to multi-player competition, this is maddening.

The most basic answer for why computer enthusiasts overclock hardware is that they can get more performance than it was officially rated to give by the manufacturer. This may be a minor difference because of a margin of tolerance in the design to reduce sensitivity to occasional voltage changes. This is common. However, manufacturers make and test chips in large batches.

Sometimes the maker may feel they have too many high-end graphic chips for the time being and mark some of them for sale as a less advanced model. This causes a much more significant difference between the chip that the buyer thinks they have and its actual performance. Hoping to unlock such a hidden windfall may be another reason the practice exists.

Overclocking is not only done by private enthusiasts.  Sometimes businesses own older hardware and are considering upgrading to chips or drivers not yet on sale. They may overclock their present system to simulate the new version. They may do this to improve performance while they wait to buy new components or find out if they should buy all new equipment. Although this puts their older hardware at risk, they may reason that it’s already depreciated and due for replacement.

For 3D gamers, their sport has constantly evolved since the games “Maze War” and “SpaSim” (short for “Space Simulation”) first appeared in 1974. In the 1980s, “pseudo-3D” graphics began using tricks of perspective and scaling of sprites up and down. The purpose of this is to improve the impression of moving in 3D space. Today there are 3D monitors, virtual reality headsets, and other technology to enhance the experience. This has all depended upon the constant improvement in CPU and GPU processing speeds.

Because these games are played on various systems, the match between a user’s system and what the game requires will also vary. Overclocking allows an owner to have a system that enables the game to play better without replacing their hardware. For an avid gamer playing many games that each make different demands, replacing hardware would be no solution.

Players started making adjustments in the chip’s control software to let it run more executions per second. This makes the chip generate more heat, damaging it if the heat is not removed quickly enough. Thus the cooling fan or system needs to work faster. The simple truth is that extreme heat damage can promptly destroy microelectronics. Many devices have been invented to deal with this: heat sinks, cooling fans, even liquid-cooled systems. 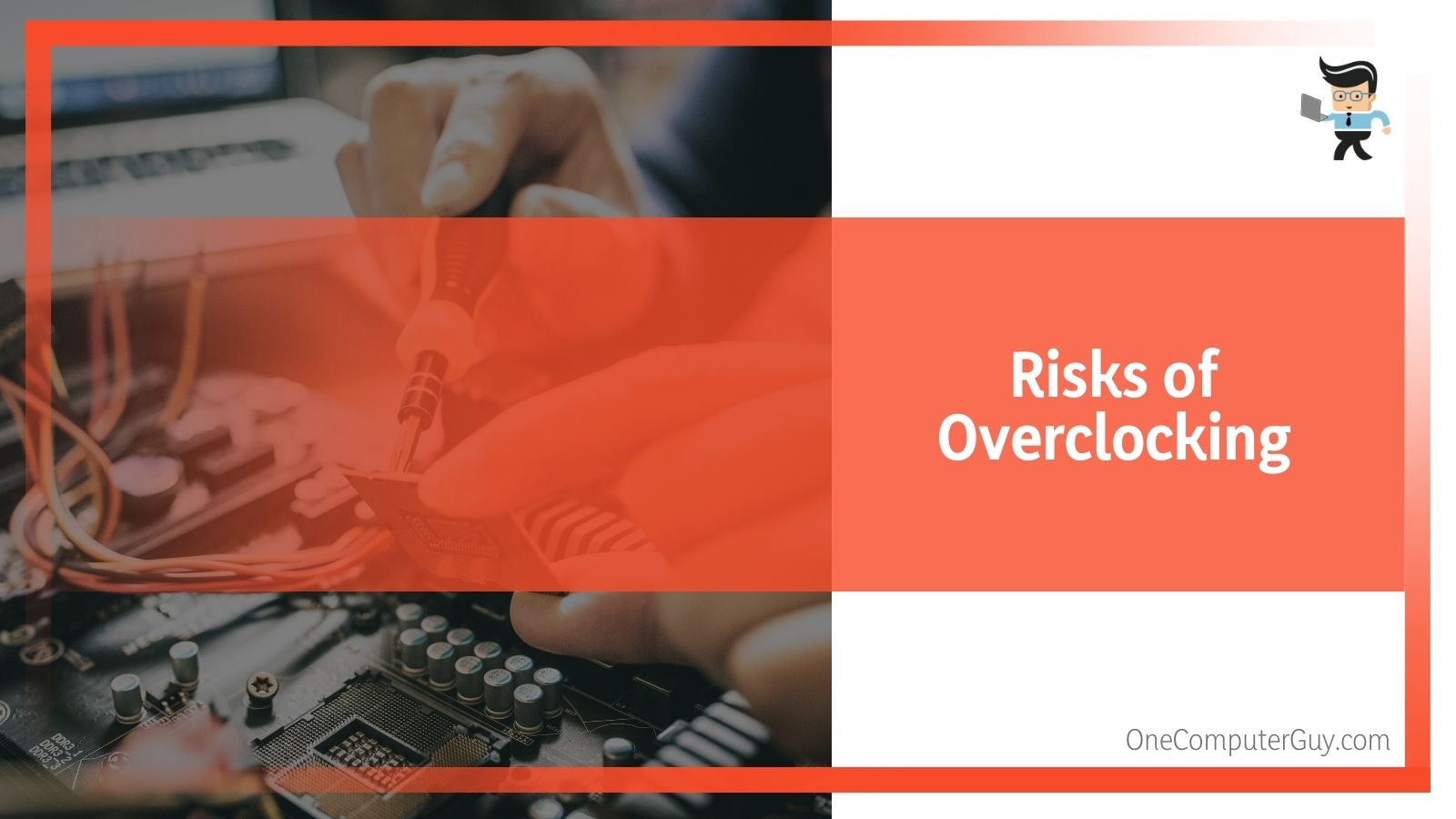 A screenshot of this disclaimer is shown in the webpage describing how to use WattMan. The warning appears again after it. Other manufacturers have such policies, although some are beginning to tolerate the practice. Yet, the paradox exists that manufacturers warn against overclocking while offering software to do it.

People often ignore warnings. Smartphone users who want stunning backdrop vistas in their “selfies” are more and more often climbing over safety barriers and have fatal accidents.  Manufacturers have realized that overclocking is going to happen despite their warnings. Offering software to track and adjust the conditions may at least keep the damage down.

AMD has aimed intense effort to correct the problem that their processors were thought inferior to Intel and other manufacturers. Some of their equipment is now considered competitive or superior. They make a wide range of graphic processors with varying capabilities. They also offer various software packages for overclocking them: Ryzen,

Overdrive, Radeon (which offers WattMan as an enhancement), and others. Each of these states that it only works for a few specific AMD graphic cards, or just for Nvidia cards, for example. None of them can be used with AMD’s “Accelerated Processing Units” (APU), which unite the CPU and the graphics processing in one chip.

Radeon WattMan settings reset repeatedly in WattMan system failures because gamers experiment with new settings to get longer game sessions or better graphics. This increases the risk to their system. They then have to re-introduce the settings they worked hard to establish. This is a byproduct of a feature meant for their convenience. WattMan puts settings back to their defaults between games to avoid carrying overclocking parameters indicated for one game into another where they don’t apply. 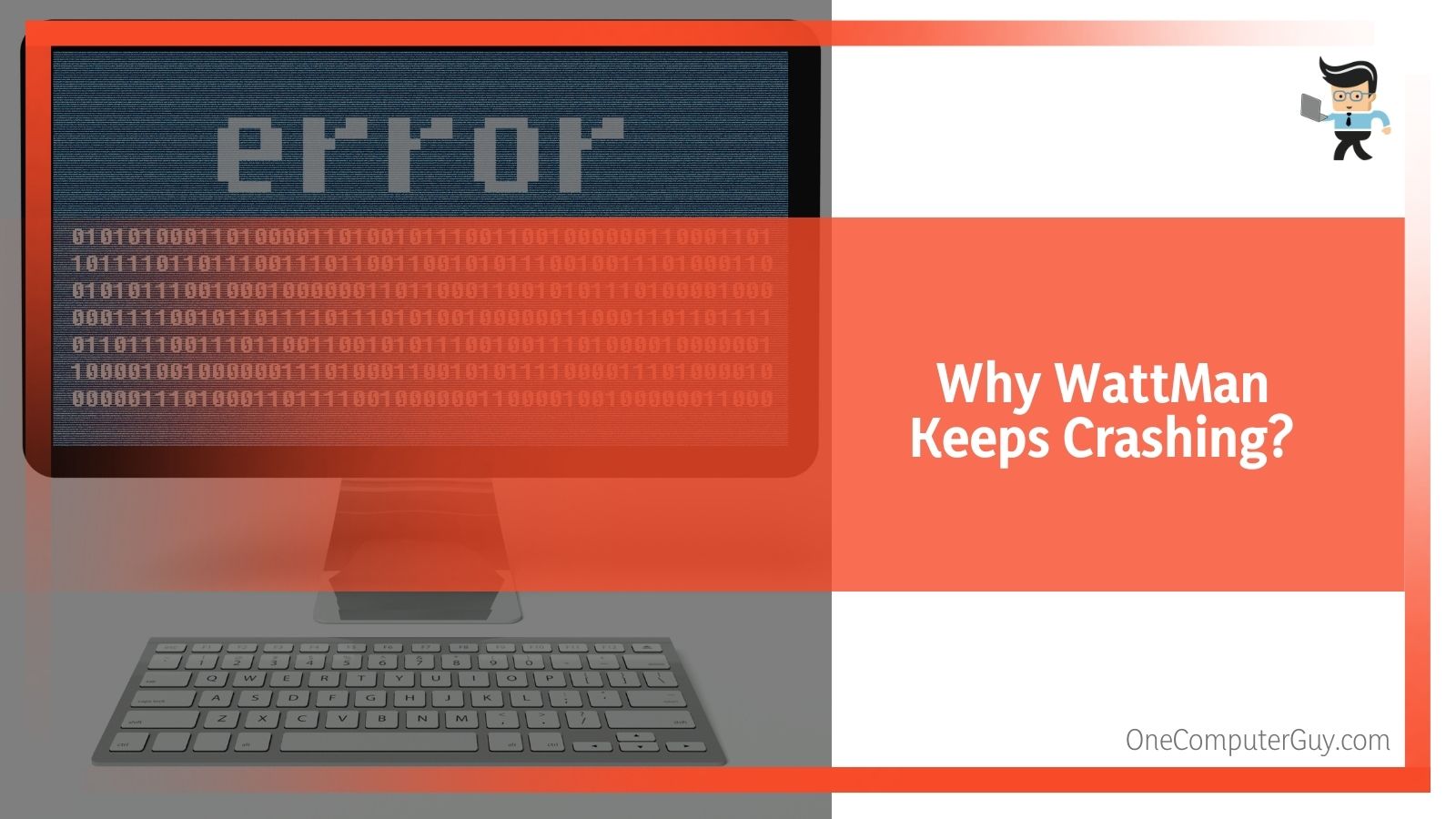 The overclocking itself may not always be the reason why default Radeon WattMan settings crash. A manager in the AMD website’s forum suggested several things users should investigate:

· Have you kept up with all Windows updates rated “critical” and/or “important”? (Some are rated “optional.”)
· Could you have corrupted system files or registry keys?
· Is your display driver corrupted?
· Is your display driver known to have issues with a specific application? (This is sometimes described in the driver’s release notes.)
· Do you have the latest patches or updates for the application(s) giving you problems?

Still, some of these problems could be hidden byproducts of overclocking.  Increased temperature due to changes in voltage and speed can cause problems other than outright failure. These can include file corruption due to inaccurate results or incorrect writing to storage. Like other complex mechanisms such as cars, microprocessors with mechanical or electronic problems may not reveal them obviously or immediately.

Choosing to overclock a system’s AMD graphic processing units using AMD Radeon WattMan software is up to you as the user. You may want to upgrade a system’s performance to try a new game without paying for new hardware. You may want to see if your GPU chips have extra capabilities, perhaps because of some manufacturers’ occasional “under-labeling.”

The general things to remember to help prevent having your default Radeon WattMan settings crash are:
• Before playing a game, make sure you understand its demands on your system.
• Know what kind of processor your system has.
• Know what model of video cards (GPUs) you have, by which manufacturer.
• Be sure that AMD Radeon WattMan software is meant for those components.
• Consider whether the performance benefits of overclocking are worth not having a warranty.
• Consult AMD’s FAQs and instructions about how to set up profiles to make restoration easier.

Manufacturers know that you’re going to take risks. They have made such overclocking calibration software as AMD’s Radeon WattMan available to help you do it. Even if WattMan keeps crashing and WattMan settings keep resetting is only an inconvenience to you. It could be a signal that damage is accumulating. The way to avoid it is to know what your system can handle and not to exceed it by too much for too long.