There is a speed advantage in playing games with a fightstick as opposed to a regular controller, and it can drastically improve your performance in fighting games. The Qanba Obsidian and the Razer Panthera are two excellent offerings for arcade sticks, but one of them is better than the other. Read on to find out which one is better for you.

The Qanba Obsidian joystick is a fightstick designed, built, and targeted for the gamers who want to play with a high quality fight stick at a mid-range of price, and who don’t want to have to pay the premium for the Qanba Dragon. As a mid-range fighstick, the Obsidian is a direct competitor to the Razer Panthera which is a pretty tough stick to beat.

Packaging and Connecting to Device

Included in the box is the user manual and the Qanba arcade stick itself, which is well cushioned to keep the stick from being damaged in transport.

Connecting the Obsidian to your gaming device is fairly straightforward and simple. Just set the switch to assign it to the gaming platform you intend to use, which will either be PlayStation3, PlayStation4 or PC, and then plug it in.  On PC, it should be automatically detected, and the drivers should install of their own accord.

The Obsidian sports a sleek and clean design that lives up to the name. Its surface is a high gloss black finish, contrasted by silver metal sides. Unfortunately, that lovely gloss finish attracts fingerprints like nobody’s business, so if you want it to remain that way, you’re going to have to clean it fairly consistently.

On the underside of the stick are two rubberized pads that prevent it from slipping on a flat surface, but it also sits well on your lap if you don’t want to be right up to the table or desk in front of you, making for a more comfortable gaming experience.

On each side of the stick’s base, there is a finger indentation that allows you to easily pick up and carry the base with stability like you would a tray. In the metal sides, there is also an RGB strip that can be programmed to be on all the time or only when a button is pressed.

It isn’t the most practical of features because the user of the stick won’t be able to see it most of the time, but it is a nice effect when viewed from the side.

From left to right for the buttons, you have PS and SHARE, Turbo button; a Mode button which controls whether the joystick is a left analog stick, right analog stick or D-pad, L3/R3 buttons,  LED button and OPTIONS button. There’s also a couple of switches; one to assign a platform and another disable the SHARE and OPTIONS buttons. Finally, there’s also a handy PS4 touchpad located above the function buttons along the top side of the stick.

If you want to sit on the couch and play your console across the room, the USB cable is a bit short at 3 meters. The stick has a compartment for you to store the cable, but the opening is very stiff and takes quite a bit of effort to open. Either this is an accident of materials, or Qanba was trying to avoid having a cheap and flimsy cover, and tried to use premium materials throughout the design.

In another nice consideration, Qanba has included a jack on the bottom of the stick for plugging in headphones. It is a nice feature, but not a surprise as many of the PS4 fight sticks come with it these days.

The Obsidian has smooth operation and it’s hard to find fault in its play. The buttons and joystick feel very responsive, on par with other sticks, including the Razer Panthera.

The joystick and buttons are very close together, which may cause some concern for people starting to play with it. However, it is very easy to get used to the operation.

The only major drawback to the Qanba Obsidian is the size. It isn’t very portable, and it isn’t because of the weight. The stick itself is large and cumbersome, and difficult to put into a backpack to take with for mobile gaming. If you plan to use the stick almost exclusively with your console at home, however, this may not be a deciding factor for you.

There is nothing wrong with the Obsidian as a gaming device. The Razer Panthera has a slight advantage with the ability to customize it, but the Qanba is still a solid choice for anyone looking in the midrange fight stick market. 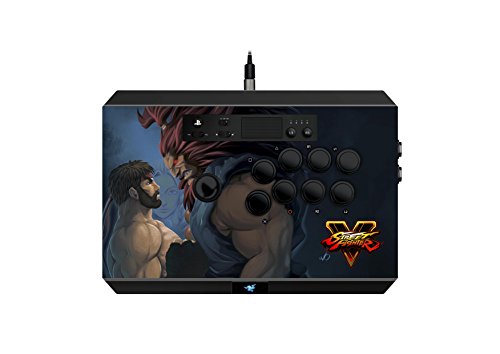 The Razer Panthera arcade fightstick is an excellent example of how much easier it can be to control your favorite games with just a few movements of your fingers instead of having to coordinate between a mouse and a keyboard or the double-thumb joysticks on a controller. It offers a fresh perspective on gaming.

Packaging and Set Up

Razer has put together an excellent box that keeps the stick protected until it gets to you, but the price is hard to justify for some gamers. Though a specialized controller like the Xbox Elite can also cost a large sum, but that has the advantage of controlling a wider variety of games.

Out of the packaging, the Panthera is a rather nondescript box with some buttons and a joystick. The standard model has Razer’s logo emblazoned large across the top in a shade of blue that looks inspired by the PlayStation, eight face buttons labeled with the PS4 controls they’re bound to, a ball top joystick, and a section for some of the less-common controls.

On the front edge, a backlit Razer logo doubles as a lid release. On the inside, the Panthera’s excellent design is immediately apparent. The hinges are smooth and high quality, a pneumatic piston holds the lid in an open position, and all of the wiring is clearly labeled, and simple to follow. There is even a compartment to store the braided USB cable, screwdriver, and an extra head for the joystick.

With the lid closed, the elegance of the Panthera is not as apparent. The seams around the lid don’t line up exactly, and the issue is replicated with the seams around the perimeter of the top plastic plate. The plastic itself, unfortunately, attracts fingerprints very easily.

The rubber feet on the bottom of the fightstick platform keeps it in place easily, and gives it a solid base. The Panthera has a long braided cable well suited for a lengthy run from wherever you’re sitting to your PC, but may struggle to stretch across a large living room from a console to the couch.

The cable screws into the back of the Panthera case, but the stem of the cable awkwardly sticks out over an inch.

Setting aside some of the quirks of the design, the Panthera is game performance shines with the Sanwa hardware. The joystick has an excellent response. It gives audible and tactile clicks when it actuates.

The large, spaced out buttons allow you to do a quick succession of taps with separate fingers to do combos that are much easier than if you were using a regular controller with thumbsticks. It offers a slightly more ergonomic playing experience as well, putting less strain on the wrists.

The Sanwa buttons barely require any pressure to trigger. This is excellent for fighting games where you need the ability to quickly respond to the game input, but that also means that after lengthy gameplay, or for people who are heavy-handed, the buttons may trigger when you don’t want them to.

The Panthera has a great look and feel, but there is not a great plug and play experience. Though Windows recognizes the Panthera and Steam identifies it as a PS4 controller, it doesn’t always detect and connect the way that it should.

If your plug and play experience is lackluster, there are a couple of options for having the PC recognize it. One way is to set it as a generic gamepad in Steam, which require you to map all of the controls to the buttons you want to use.

The alternative is to get Razer’s X-input drivers, and then Windows and Steam recognize the Panthera as an Xbox 360 controller. It’s workable, but it isn’t ideal.

Because of the ease of use, the Obsidian wins out over the Razer Panthera.

Best Gaming Couch for All Gamers: Read this Review Before You Buy 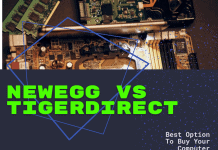 Newegg vs Tigerdirect: Best Option To Buy Your Computer Parts

The Best Leather Gaming Chair for Avid Gamers and Enthusiasts

Techni Sport Chairs Review: Here are the Top 4 Options for Every Budget

What Is The Best DPI for FPS Games?

Best Fabric Gaming Chair for Top Gamers and Professionals in 2021