If you are purchasing a motherboard for the first time, you may have many questions about a motherboard lifespan, how to increase it, how to decrease it, and what you can expect out of your investment. 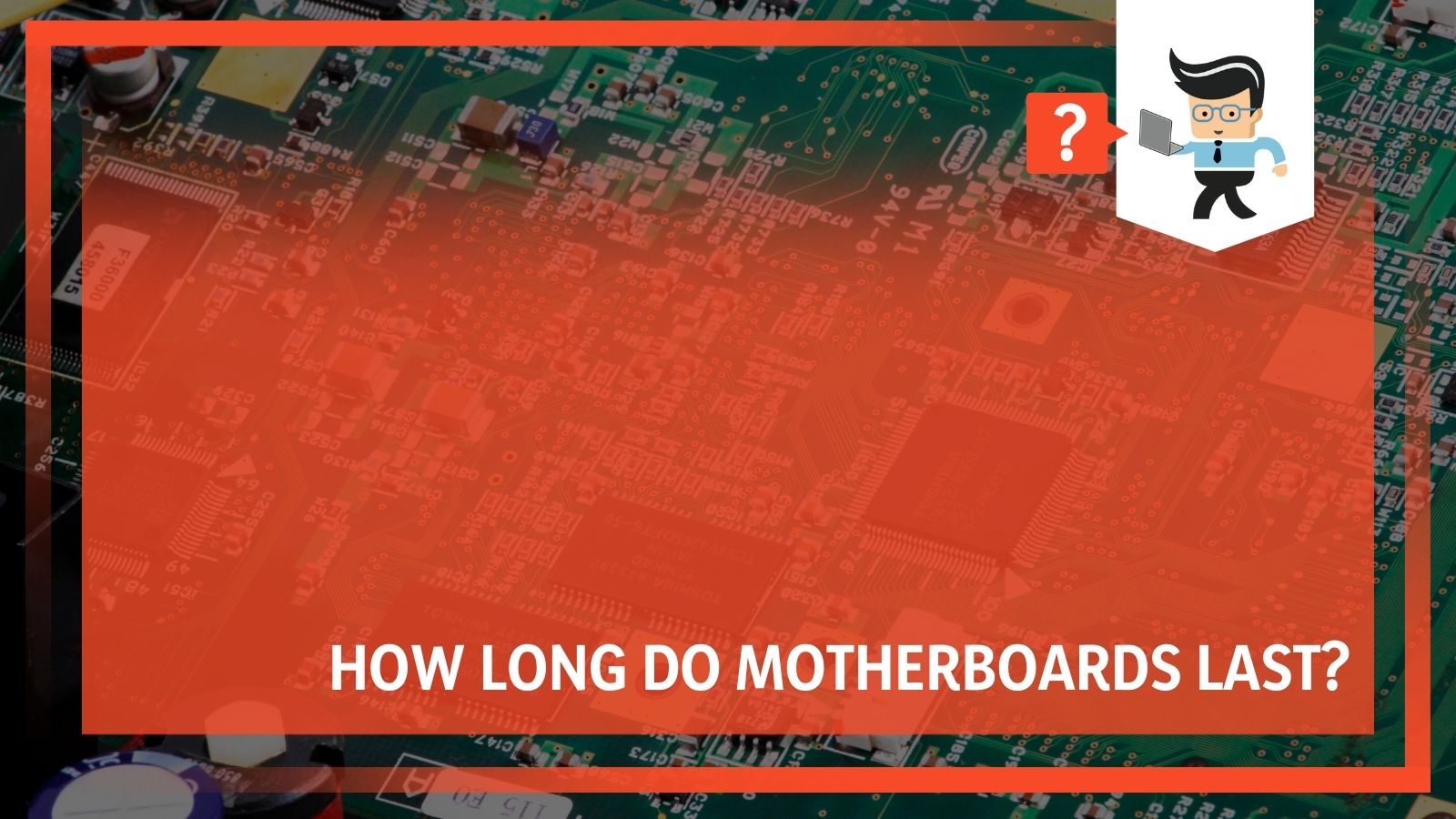 The good thing is that many people have looked into different ways to keep their motherboards lasting a long time, sometimes far beyond the average motherboard lifespan.

Whether you are looking to buy a brand new motherboard or you are considering repurposing an older one, there are some things you need to know about motherboard failure rates, how to increase their lifespans, and more.
Read on for more information.

How Long Does A Motherboard Last?

Your motherboard is a bit like a pet, how you treat your board will dictate how long it will last. In most cases, you can expect to get somewhere between 7-10 years on your board.

If you don’t take care of it correctly, you may get less. If you aren’t hard on your motherboard and you don’t expect much, it can last much, much longer. There are some motherboards that are over 30 years old that still work.

Your motherboard’s lifespan will depend on a few different things:

Of course, you also need to consider that not all motherboards are going to “fail” in the same way. Some will just stop working, but most people will have moved on before this happens. Often, there will start to be some degradation in performance or the board becomes technologically obsolete to the point where you will want another one.

What Can Shorten A Motherboard’s Lifespan?

If you are looking for some best practices to keep your motherboard performing well for at least 10 years, there are some considerations that you need to make. You want to avoid the things that can shorten your motherboard’s lifespan. They include: 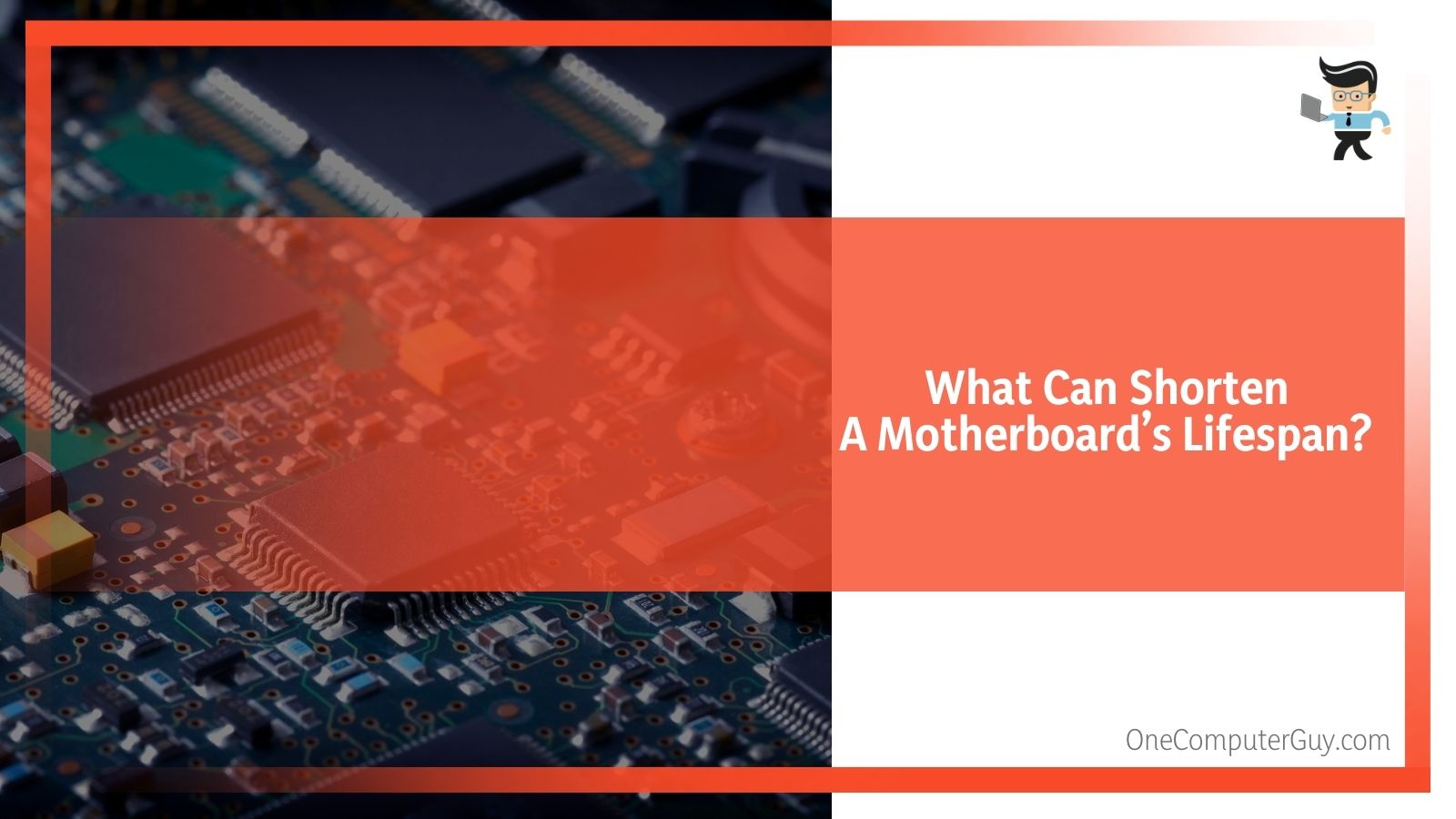 The biggest cause of motherboard failure is heat. Your computer generates a ton of heat and you need to moderate it as much as possible. For regular computer users, the fans and vents built into your system are good enough as long as your environment isn’t too hot.

If you overclock and use your computer heavily, however, they may not be enough. The heat can slowly build up and will overwhelm your motherboard and the connected components.

Physical damage to the motherboard isn’t common, but it isn’t rare if you are building your own computer. Any large impact or rough handling will damage and destroy the motherboard or components. You need to be gentle when you hold your motherboard on when you work on it. If you have a gaming PC that you move around frequently, you will want to avoid movement that can jostle it too much.

Just like all of us, as a motherboard ages, there are certain components that will wear out. As electrical currents pass through your motherboard, the components will eventually just start to wear out. The most common culprits of this are the capacitors because they hold charges for short periods of time. As they cycle, they start to degrade. While they will still work as they degrade, it is something to consider. Motherboards that are cheaper will have poor quality-capacitors that will degrade much faster.

Any kind of liquid will almost automatically kill your motherboard, whether you spill something directly on your PC, it rains in your window, or your cooling system leaks. The salts dissolved in the water will make the fluid conductive, so your motherboard will completely short out, getting fried in the process.

Even humidity in the air can cause some shorting (and bacteria growth), so you need to ensure that you keep it in a cool, dry environment.

Most Motherboard Won’t Die, They Just Won’t Do What You Need Anymore

Most motherboards will eventually become obsolete, especially if you are a gamer. All technology comes and goes in popularity, like your phone, gaming consoles, and even your television. Motherboards aren’t immune to technological advancements rendering them pretty useless.

Most motherboards are only compatible with two generations of CPUs before they need to be replaced. It isn’t just that they won’t meet the technical requirements, it is that they cannot physically fit into the old motherboard’s socket. It’s a problem that you can’t really avoid. Over time, your older CPUs won’t be able to run new software, and it isn’t really the motherboard that goes bad, it is the CPU.

Of course, there are other components that won’t work with your motherboard anymore either. Hard drives, SSD drives, graphics cards, and more may all impact whether or not your motherboard is still useful.

How Can I Increase My Motherboard’s Lifespan?

Your motherboard is a pretty big investment, so you do want to protect its lifespan as much as you can. There are some behaviors you can do to keep it in working order for longer, but you will have to consider whether or not they will impact your enjoyment of your computer. For example, not overclocking regularly will help to increase the lifespan, but if you can’t overclock, you may not get out of your computer what you need. 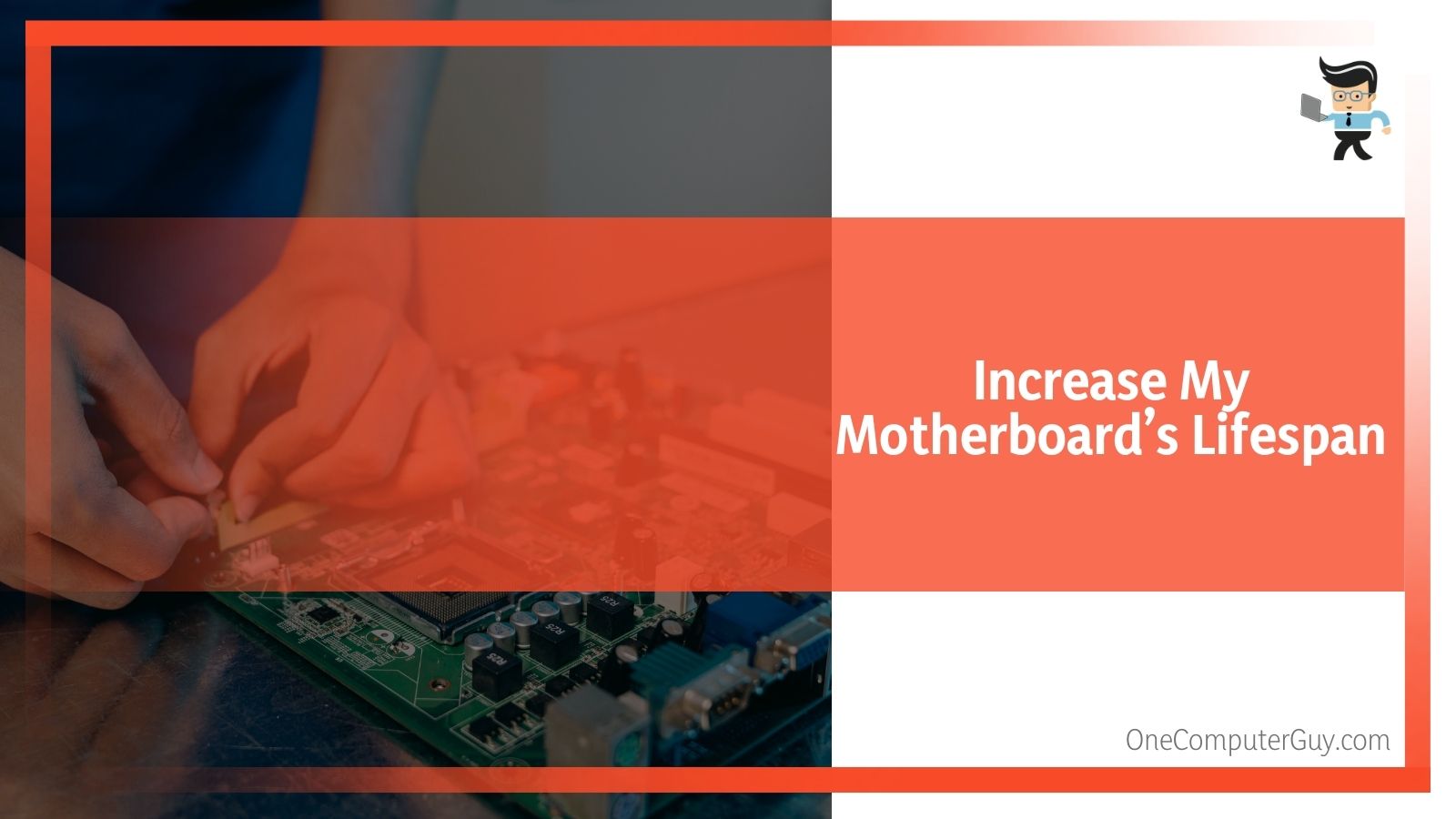 Just like with a car, your motherboard will operate better if it is clean. Do not allow dust to build up on your motherboard. Dust will insulate it, acting like a barrier, and prevent cool air from circulating inside your case. Eventually, this will cause degradation. It will also put heat strain on the components, leading to early failure.

To clean your motherboard, you will need to open up the case and use compressed air to remove any build-up of dust. Do not simply blow into your case using your mouth. This can cause even more moisture that will destroy the electrical components.

Put fans toward the top and back of your case, if possible, to help promote good airflow. You could also invest in an all-in-one water cooling system to help with cooling.

The best way to do this is to place moisture absorbing crystals near your PC, invest in a dehumidifier, and ensure that you reduce the moisture around it as much as possible. For example, don’t keep plants or a fountain near it.

It can be tempting to buy lower-quality power units and surge, protectors, because there are plenty of them available, but this will not help extend the life of your computer. We live in a world where extreme weather makes electrical outages more common, so you need to use a surge protector whenever possible.

A protector can save your gaming computer from frying. Spend a few more dollars on a good one instead of getting one from your local dollar store. It just isn’t worth it from an investment standpoint. You can buy one for a few different pieces of tech, but don’t overwhelm it either.

While you can’t always do all of these steps, you can take a few simple steps to ensure that your motherboard lasts a long time. You might not need your motherboard to last for a decade because you want the latest piece of tech, but if you do, you will find it is easier than you think to extend its lifeline, you will just need to change some of your own habits.

What Should I Do If My Motherboard Is Fried?

If you think that your motherboard is fried, you probably won’t be able to get it fixed and have it operate in the same way. You will need to look for a new one, and you may even have to look for other new components to go along with it, including a new RAM and a new CPU. 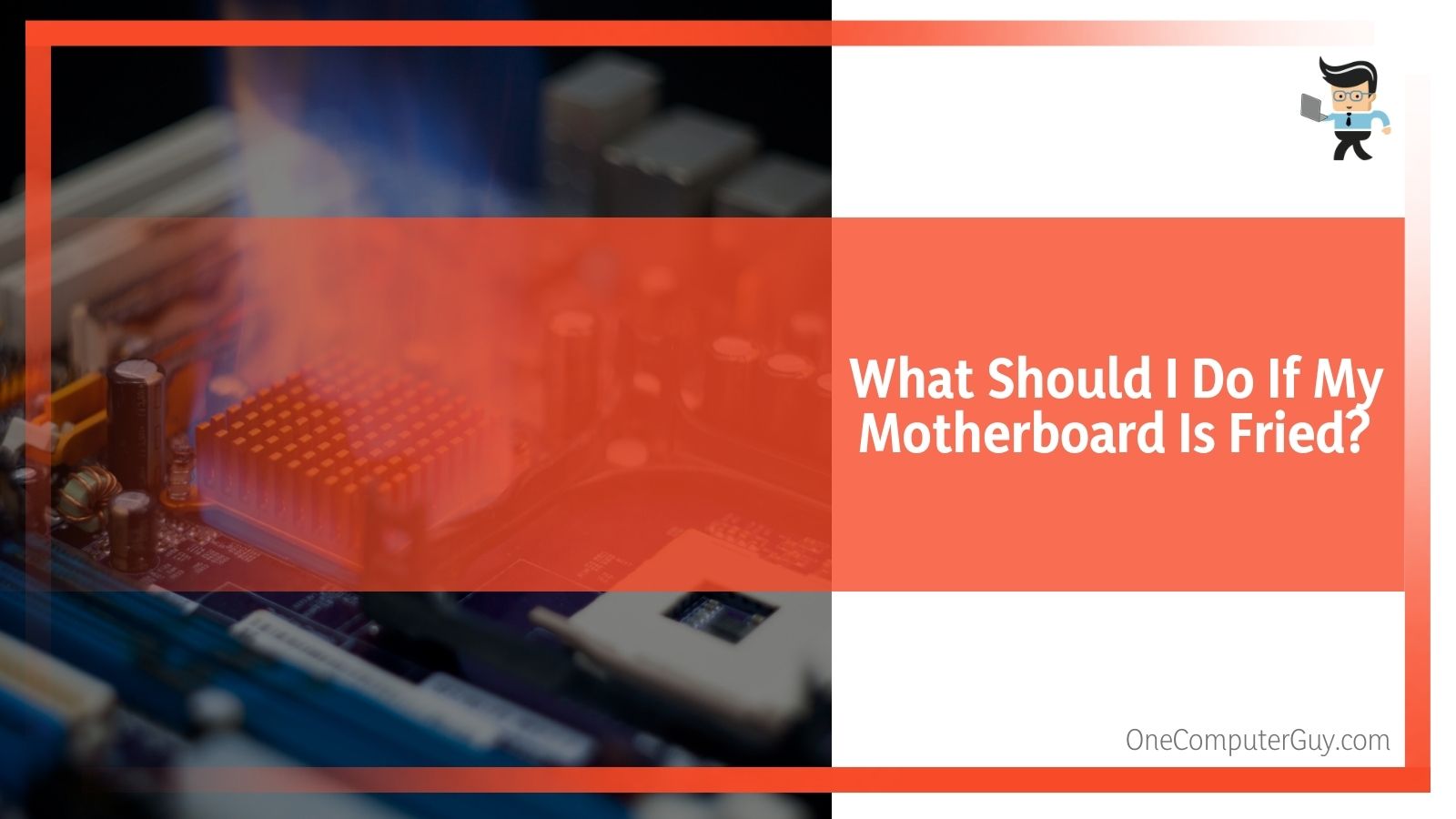 If you are strapped for cash, you can take your case to a professional who will look to see if it was the CPU that failed or something else that makes it seem like your motherboard has been fried.

Overall, motherboards are pretty sensitive pieces of technology that you do need to take care of on a fairly regular basis. If not, you may end up with a fried motherboard that has a shorter-than-average lifespan.