FireCuda vs WD Black takes these top models from popular brands and pits them against each other, and our review team goes over their capabilities. The best solid-state drives can supercharge your PC, so it’s vital to learn more about your choices before purchasing. That’s what we have done for you here.

Our review will explain all you need to know and break down every feature and highlight, including their pros, cons, general performances, and suggestions.

Making up your mind to get an external hard drive for your computer or gaming console means one thing: you want extra digital storage space. These two devices offer the same 2TB of space. You can use either one as secondary storage on your PC to store your media, games, and other files on the hard drive.

Sporting a form factor of just 2.5-inches, these two drives are portable and won’t give you stress to carry around or maneuver. Further, the WD Black benchmark is similar to its counterpart across different areas.

When it comes to building and design, they both have straightforward designs. You won’t pick either of them if aesthetics moves you, although the P10 has a better look. But we rate their appearance as simple.

These two drives are easy to install and won’t give you much of a problem operating. They compare well on the speed, size, and other relevant parameters as hybrid drives. You’ll only notice significant differences depending on the particular task or application you’re doing with each device. However, FireCuda’s performance is driven by gamers, so it’s an easy choice.

We’ll also recommend the FireCuda even though it slightly edges the WD Black in terms of reliability.

If you’ve been in the market for hard drives, perhaps you’ve come across Seagate and WD BLACK brands. While they’re not exactly household names, they both have models that can compete with other brands. That’s what we have with these two products in our comparison.

Like many SSDs, they come in a 2.5-inch form factor and connect to your PC via the same SATA port used by a traditional hard drive. But the P10 Game Drive primarily uses a USB for that purpose. We have tested both drives to find the best SSD for your use case. Also, you’ll get helpful information on how they work and compare to each other. 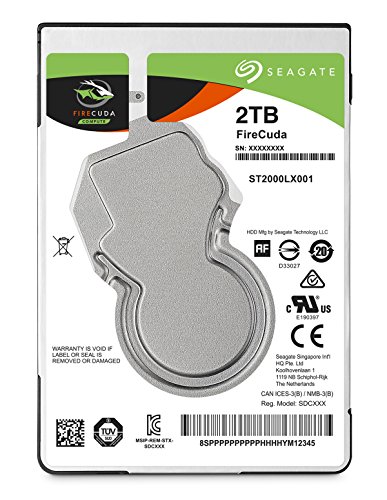 The Seagate FireCuda is a hybrid drive aiming to bridge the gap between older HDD tech and modern SSDs. That includes those looking to upgrade an outdated HDD or give their computers and gaming consoles some extra storage space.

This SSHD feels like the right choice for some needs, and we’ll uncover them.

Our Seagate FireCuda review points to a drive that starts up to five times faster than traditional 7,200 rpm hard drives. It also combines SSD with HDD for consistent performance and the storage capacity you need. It’s best for gamers and users that appreciate more space and functionalities.

– Build and Design: Primed for Gamers

When you first sight this SSHD, there’s no mistaking that it was made with gamers in mind. Also, like others in the series, it features branding and game-like aesthetics. While the design doesn’t play a significant role, it sure helps you get a device worth the looks.

One of the top features is the bare metal plate with a single sticker denoting the logo, storage size, and branding. Also, under the device is the same metal enclosure and the SATA interface you’ll plug into your motherboard or external enclosure. We’ll state here that this drive is best suited for a typical full-sized desktop computer. But it will work well with a laptop or gaming console if you place it in an external enclosure.

Its 2.5-inch form factor is much better than the 3.5-inch model, which is heavy and less portable to move.

The setup process depends on how you plan to use this hard drive, but overall, it’s easy to do. Shut down your computer and unplug before initiating the process and attaching the necessary brackets for installation.

The FireCuda is often tagged as better than an HDD but worse than an SSD. However, we feel that’s not the case. We tested how good it was through the Seagate FireCuda benchmark and the CrystalDiskMark for benchmarking. Other than that, software on Seagate’s website will help test your new drive, assist with data migration, backup files, and monitor its status.

The hybrid FireCuda SSHD also has a tiny amount of NAND flash memory that functions as the SSHD’s cache memory. It works by making the most frequently used applications appear on quicker memory. That helps to boost speeds and performances. 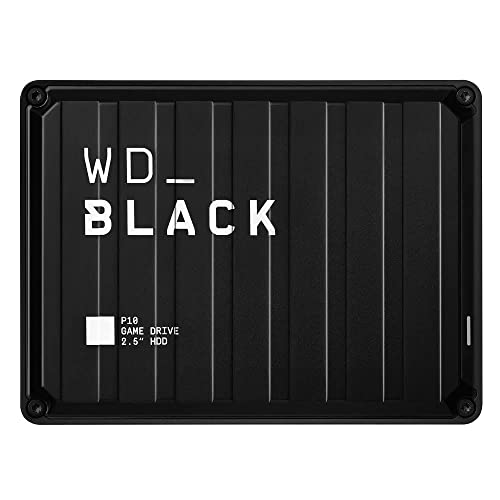 With this Western Digital Black SSHD, you get a device that follows the same design obtainable on other drives in the Black series from Western Digital. Some of the design features include a ridge appearance and black casing. Also, the aesthetics won’t please everyone, but hey, it’s all about performance. That’s because the drive will last longer than many rival models.

From our Western Digital Black review, it’s evident that this drive is worth getting. It’s compatible with various systems and has the memory space for many activities. It will fit users that want a sleek, portable, and reliable SSHD to store games and other data.

– Build and Design: Direct and Impressive

A sleek design doesn’t come easy, mainly when brands focus more on deliverables and quality. However, this 2TB edition of the P10 is lightweight and carries a slim look. As a result, it’s portable enough to move around in one hand and has small rubber feet under the external disk drive, so it doesn’t slip.

Like its rival above, setup is simple no matter the device you’re connecting the P10 to. There’s a bundled cable to connect. Plug it into your console or computer, and it is ready to run in a couple of minutes. There’s no software in the disk drive, but you can get that and other utilities on the Western Digital website.

You get a lot of space on the Western Digital SSD with up to 2TB. That’s enough to contain more than 30 games on average compared to the 5TB variation capable of holding 125 games. It’s good enough to boost your computer and native memory.

Thanks to the conventional 2.5-inch hard disk drive running at 5,400 RPM, it offers good value. But it’s not going to compete with the best SSD drives for speed, and it doesn’t have to. Moreover, the drive can deliver transfer speeds of up to 140MB/s. That’s a fraction of the rates offered by the best SSDs on the market.

On further testing, we found no problems with speed or reliability. It will support USB 3.2 Gen 1 via a USB-A connector or Windows machine with ports that match that spec. Besides, the drive is quiet in operation apart from the occasional gentle humming sound, and it won’t heat up after many data transfer activities.

– Is the FireCuda from Seagate Suitable for Gaming?

It sure is. It’s called the FireCuda Gaming SSHD 2TB SSHD and was intended by the brand to be a gaming device. The 2TB memory capacity is enough to store multiple games and shore up your computer storage.

SSHDs like the FireCuda are designed to achieve superior performances and deliver more than HDDs in some parameters. The secret to that lies in the NAND technology. You can find a sprinkle on some SSHDs, including the Seagate FireCuda. SSDs also use NAND tech, but in small amounts.

The memory module functions as a cache memory, with the system taking the most used applications and storing them on small memory potions, thus boosting performance.

Yes, but for specific reasons. One of them is if you want to save space. For example, if you’re a laptop owner who can’t afford a high-capacity SSD and wouldn’t want to drag around an external HDD everywhere you go.

Another reason why you should buy an SSHD is the excellent value you get and the performance to affordability ratio. What you get with SSHD is a device sitting between an SSD and an HDD. Also, it doesn’t cost as much.

– Is WD Black Good for Storage?

Yes, WD Black is good for storing games or any other files. Although it doesn’t have a superior performance, but offers an affordable price and can get the job done.

Our review and comparison of these two SSHDs showcased their form factors, memory capacity, and other features that boost their performances. They both have a simple design and movable carriage, which means you can take them anywhere.

Depending on what you want, they are ideal choices for your rig, but we’ll go with the Seagate FireCuda 2TB drive.

The FireCuda series of SSHDs are an ideal bridge between older HDD tech and pricier SSDs that will give you a bit of an edge compared to non-hybrid drives. If you’re on a budget and want that extra space and quality performance, the FireCudais an easy choice over the P10 and standard HDDs. 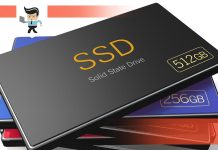 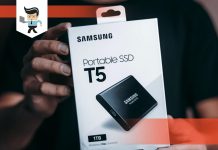 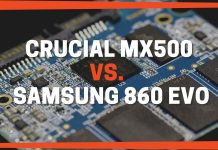