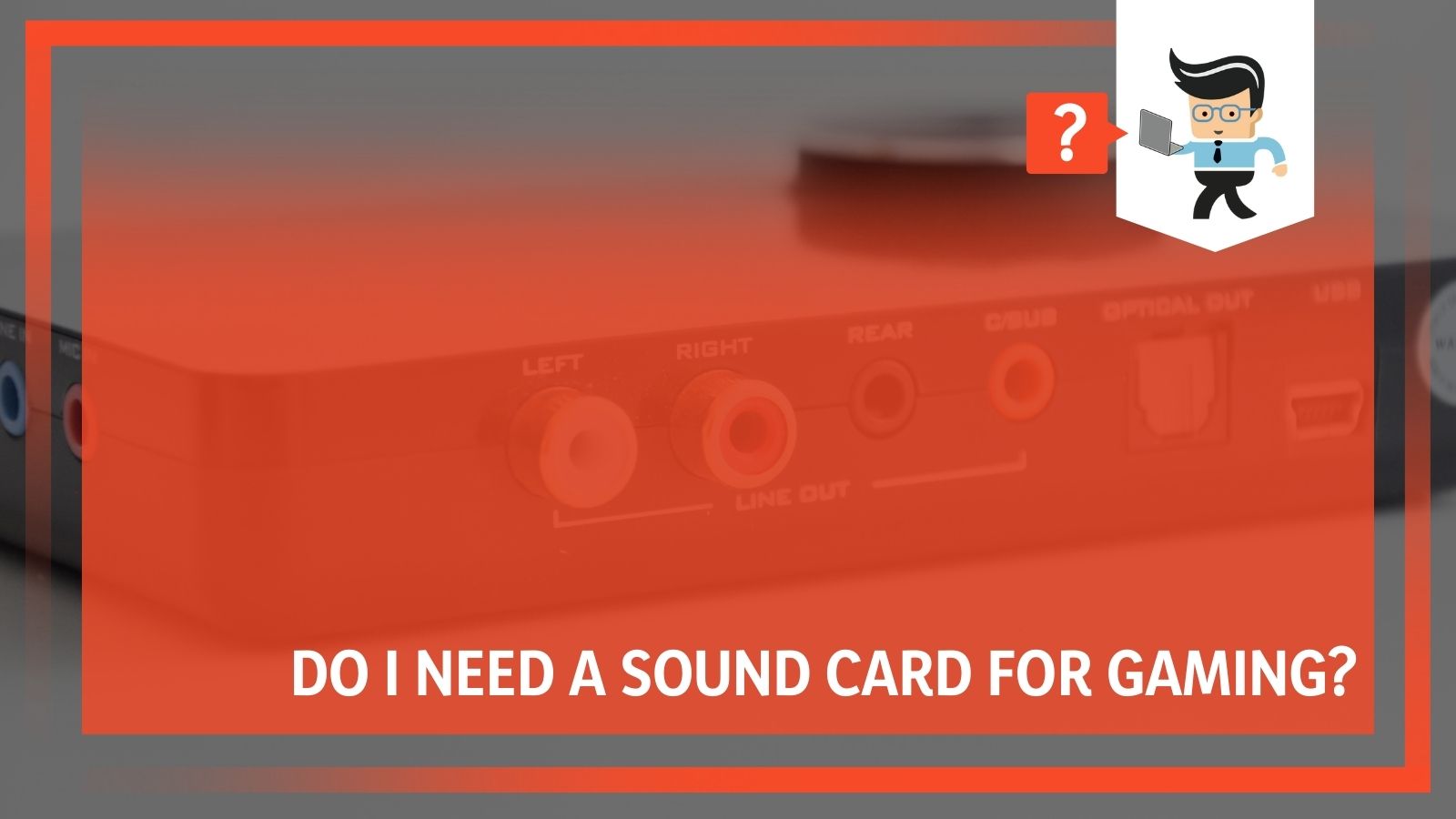 However, if you were to ask a normal person if a sound card is necessary, they would probably tell you that the answer is no.

The true answer is somewhere in between. Not everyone is going to need a sound card for their gaming PC, but some people will. Let’s dig a little bit deeper into the question:

What Is A Sound Card?

It will have numerous contacts on the bottom of the card and a few different ports on the side for connecting to all of your audio devices, such as speakers. The sound card gets installed into a PCI or PCIe slot on the motherboard.

Your motherboard is designed to hold the cards, case, and other required pieces of hardware, but not always a sound card. As such, the side of the sound card will fit outside the back of the case. This allows its ports to be exposed and ready for use.

You can also get a USB sound card that allows you to plug in external audio devices such as headphones, microphones, and audio devices through a small adaptor that you will plug directly into a USB port.

A sound card can help with any of the following aspects of your computer’s sound production:

Do You Need A Sound Card For A Gaming PC?

You should know that a sound card alone cannot provide you with the best soundtrack and sound for your game. If you do not have a high-quality speaker to get that sound or a pair of good gaming headphones, you probably won’t get the value out of it. You need to be all in or all out when it comes to sound. You won’t even get halfway with either a sound card or headphones, you need both.

So the short answer is, yes, you need a sound card if you want the best gaming experience. This will help with intense games and those who want to get immersed in the world of whatever they are placing. Games like PUBG, Elder Scrolls, and even Minecraft have soundtracks that you want to hear.

Even if the soundtrack doesn’t really matter to you, the technical aspect may be important: using a dedicated sound card will reduce the amount of CPU usage, freeing it up for other tasks and potentially extending its life.

If you are not a gamer and you just want a sound card for listening to music or having the best experience when you are streaming, then you might not really need a dedicated sound card. It can’t hurt, but it isn’t something that will be too noticeable to anyone who isn’t an audiophile.

However, if you are one of those gamers who likes to be fully immersed, or you play games where the sound is a factor, then yes, you need a dedicated sound card for gaming.

Is It Easy To Install A Sound Card?

When you think about adding a sound card to your computer, it may feel a bit intimidating. However, sound cards are usually color-coded so that you can arrange everything. These are the colors that have been used for years for the same devices, from old televisions to the most modernized pieces of computer tech. 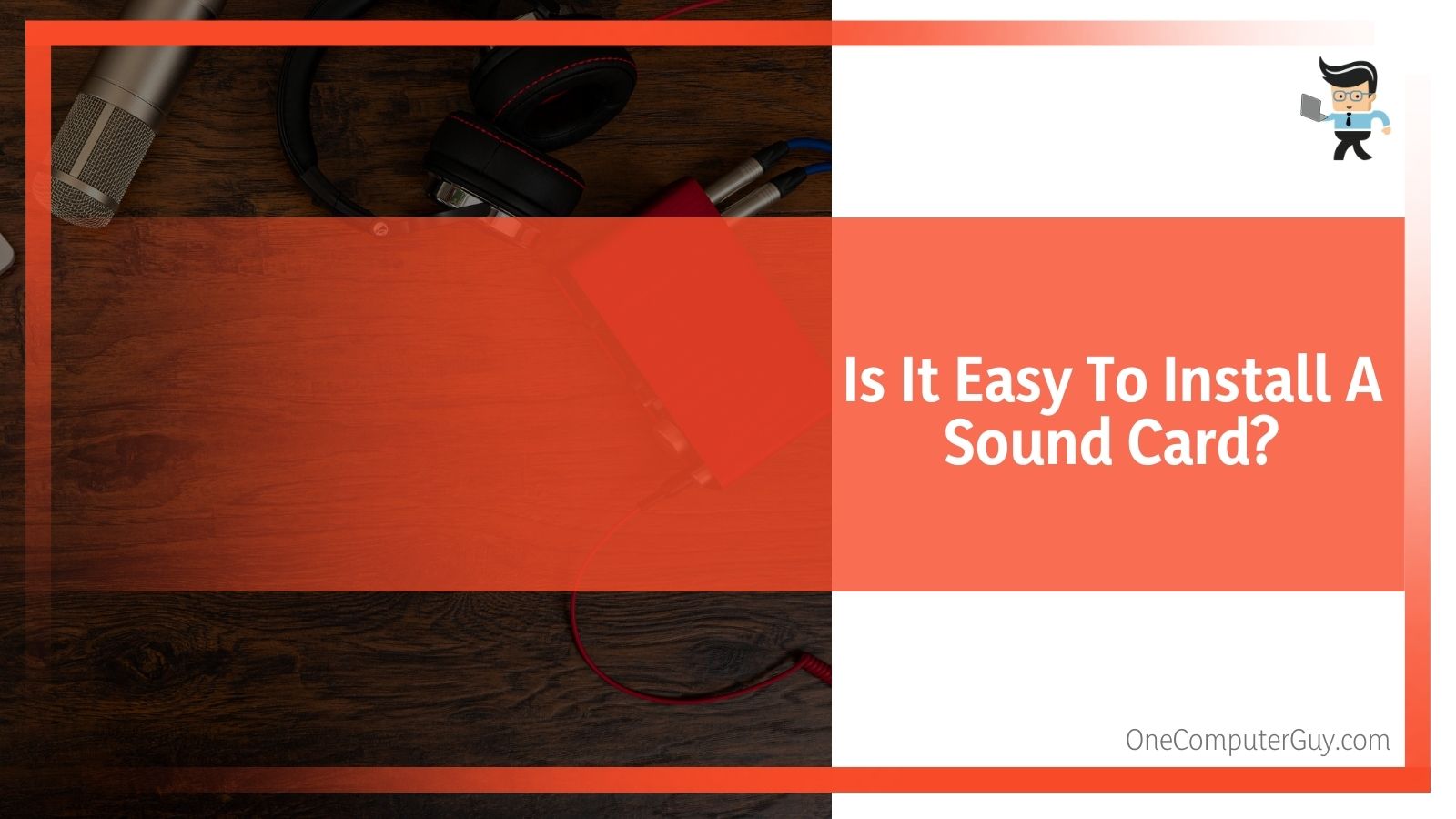 Even so, it is important to know the different colors:

A Word Of Warning About Sound Cards

You should know that a dedicated sound card may not be the best option for every gamer. You need to pick the right sound card to have a good experience.

If you don’t take your time to do research, figure out your system requirements, and read some reviews, you will end up buying something that turns your gaming experience into a nightmare.

When Were Sound Cards Developed?

Sound cards were developed in 1972. Most people will credit the Gooch Synthetic Woodwind, used by PLATO terminals, as the first sound card. It was invented by Sherwin Gooch and was a synthesizer capable of 4-voice music synthesis. Naturally, it was typically used for audio production.

The Apple II Computer was the first computer known to be capable of using plug-in sound cards, though some urban legends say that there were a few before it that could. The computer used the Apple Music Synthesizer that was developed by ALF Products Inc. in 1978. 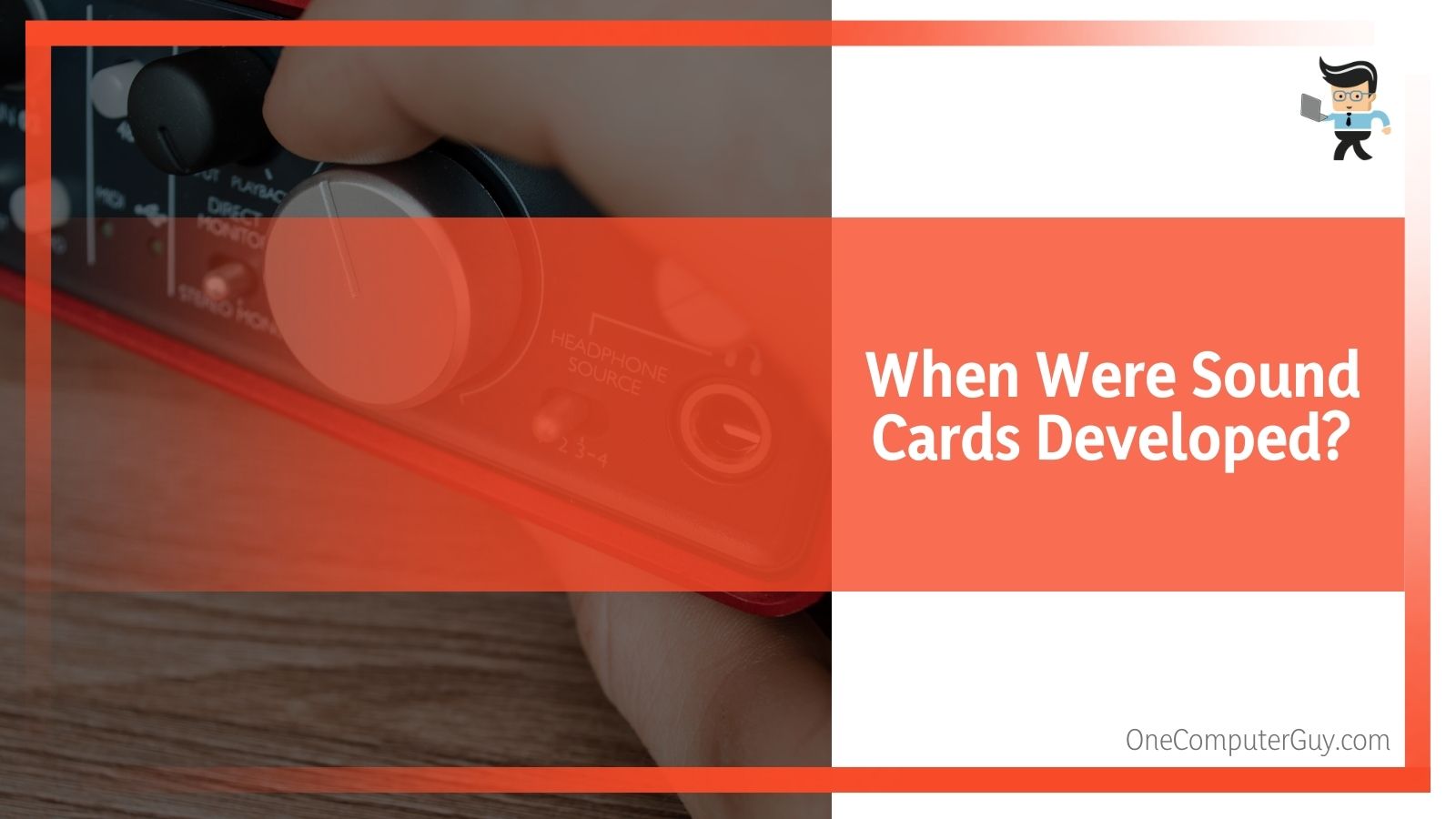 The first sound cards for IBM PCs were developed by AdLib, who developed the Music Synthesizer Card in 1987, basing it on the Yamaha YM3812 sound chip. Since then, many companies have jumped onto the bandwagon and started creating sound cards for different gaming setups.

What Interface Does A Sound Card Need?

You want to ensure that before you buy a sound card for your computer that you have the available connection. Sound cards are available as both PCI and ISA connections.

PCI Interfaces are what most cards today will use. If you plan on using your sound card for gaming, watching movies, or listening to music, you want to get a PCI sound card.

ISA Interfaces tend to be the cheapest sound cards on the market. They will do if you are looking to marginally improve sound quality. In addition to being cheap, they will keep your PCI slot available for other needs.

After you determine the connection on the sound card, you need to look at the available connections on the card. You want to know that the card will be able to do everything you need it to do. You want to check out:

If you are a gamer, it will be important for you to have two available speaker connections. One will connect to the front speakers and the other for the rear speakers. Users who don’t plan on using the surround sound of four speakers will only need one speaker connection.

The midi port will allow you to connect to a Midi keyboard, however, this will more commonly be used as a game port if you play games that use game paddles or joysticks.

You will need to have a microphone connection, especially for gaming.

You also want to be sure that your sound card is full-duplex and allows for sound cards playing and recording at the same time. This is the feature that is used to do voice communication over the internet or speakerphone.

● DirectSound 3D – Microsoft’s software API that is included with DirectX
● EAX Creative Labs Environmental Audio Extensions – helps to create realistic and believable sound effects based on the environment of a specific game
● A3D Originally developed by Aureal – this is a software developed for additionally 3-D acceleration.

Some other important things to consider are whether or not there is a warranty on your card and whether or not you have support if something goes wrong.

How Much Does A Sound Card Cost?

The price of a sound card can range depending on the type of sound card purchased, the number of connections, and more. 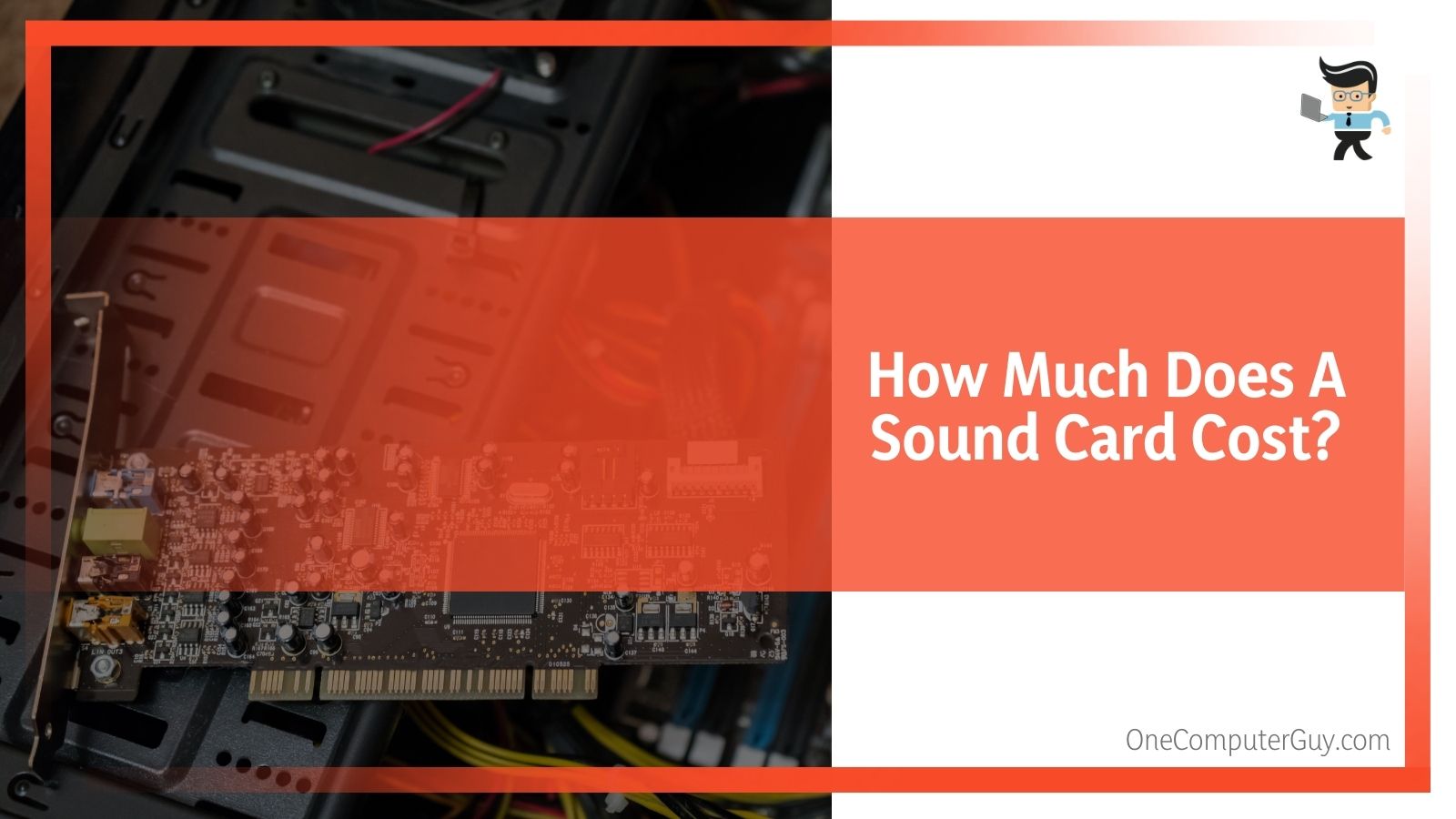 It is hard to predict just how much a sound card will cost you because there is such a range. You can get a sound card for anywhere from $20 to nearly $300.

Who Are The Most Well Known Sound Card Manufacturers?

If you are looking to purchase a sound card, you probably want to buy from a trusted manufacturer. While there have been so many companies trying to improve sound quality, most of them have either stopped or haven’t yet succeeded in their quests. As such, the leading sound card manufacturers are:

Of course, new companies emerge all the time. Some of the companies that have historically created great cards but have since closed include:

If you are ready to purchase a sound card, be sure to do your research, look at your hardware, and figure out just what you need to get the most out of your investment. 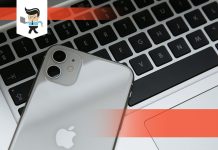