DDC vs D5 are both top-quality water cooling pumps for your gaming PC, even though there are some performance differences between them. If you are looking for the best cooling water pump between DDC vs D5, you are in the right place.

This article will cover a detailed review of D5 and DDC to ensure which is the best pump for you, so make sure to read until the end so that you don’t miss anything important.

What Are the Main Differences Between DDC vs D5?

While the DDC has higher pressure but lower flow rates, the D5 can provide greater flow rates at a lower pressure. It’s also vital to be aware that small DDC pumps might occasionally be a little noisier than D5 units.

Before you choose one of these water cooling systems, there are a lot of factors to consider. Prior to anything else, you must decide on the type of water cooling you’ll use.

DDC pumps are the only option if you want to create a high-pressure loop that is more aggressive compared to the D5. These loops are incredible and are mostly utilized by numerous teams in competitive gaming.

On the other hand, you need D5 pumps if you want to use an aggressive high-pressure loop. Let’s discuss some of the top differences between the two pumps.

There are numerous variations of the pump available, even though the DDC vs D5 designations specify the basic concept. D5 is larger and occupies twice as much area as the DDC. With a head pressure of 4 meters, a typical D5 pump has a potential flow rate of 1500 liters per hour. 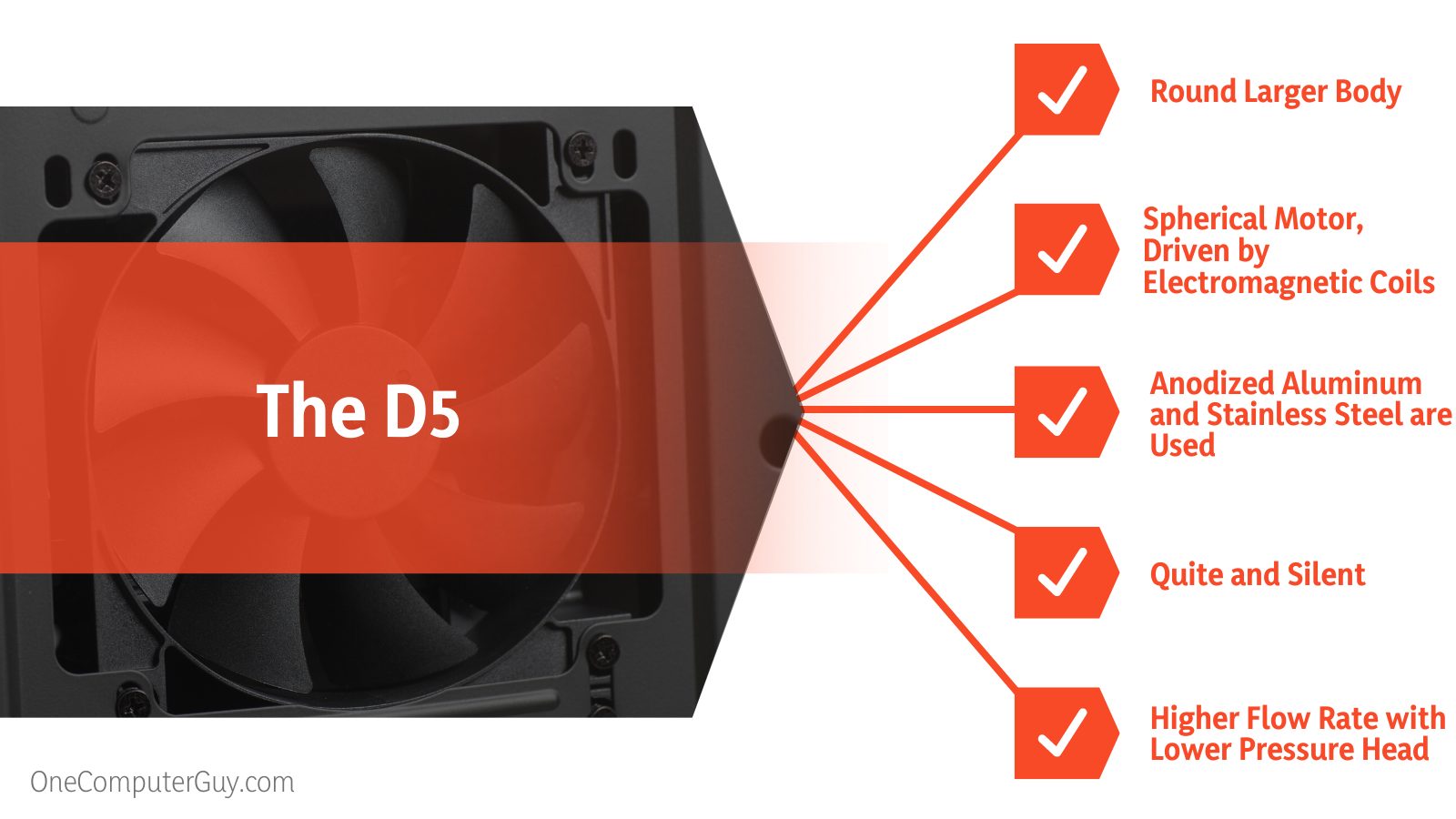 You should be aware that the D5 pump’s body is totally rounded, making it easier to position at any angle within 360 degrees, in case you’re worried about how to install it. This pump also allows for vertical and horizontal positioning, which makes tube routing easier.

The DDC pump is perhaps the first pump in history to be utilized in a large-scale liquid-cooled workstation. The DDC pump soon entered the hands of lovers of liquid-cooling because of its compact size and high output.

The PWM control, on the other hand, enables pumping speed autoregulation based on CPU temperature. The Elite 3.2 DDC PWM pump runs silently when not in use but delivers top performance when required.

In order for your liquid-cooling loop to function properly, you must adhere to the predefined input and output ports on both D5 and DDC pump and pump tops such as EKWB EK-XTOP DDC elite variants.

D5 pump draws 2 amps at 12V and 24W. 18W at 12V DDC, or 1.5 amps. Although there could be a few minor differences between iterations, those are the general specifications. Additionally, one PWM version D5 device is listed at 37W, which translates to 3.1 amps, but most were put at 23–24W.

Differentiating the pumps of DDC vs D5, both use the same principle of the spherical motor. The D5 spherical motor pump’s major feature is its simplicity. A hemispherical impeller unit (rotor), which is the only moving component of a spherical motor, is mounted on a ceramic bearing ball that is extremely robust and wear-resistant.

A permanent magnet is built right into the rotor, and it is powered by electromagnet coils tucked beneath the metal casing.

Between the electromagnet and the permanent magnet (rotor), there is only a straightforward force interaction (stator).On the ceramic bearing, the magnetic rotor always maintains an optimal equilibrium. The pump has a very long service life since it is very durable, and the sections exposed to the fluid are corrosion-resistant.

The DDC pump operates using the same basic spherical motor principle as the D5 device. The only moving component is a ceramic ball that resists wear and is supported by a permanent magnet impeller rotor with a spherical shape.

Bearing play is eliminated by the ceramic bearing ball’s spherical shape and the overall design (also applies to the D5 design). Small dirt particles and maintenance do not pose a problem because the rotor of a DDC pump is also magnetically kept in the intended place.

Water is used to lubricate both pump D5 vs DDC. They employ wet rotor design, to put it another way. Therefore, it is strongly advised against running any of these pumps dry. Furthermore, liquid with a temperature of less than 140 degrees Fahrenheit should be running through both kinds of pumps.

As far as the housing is concerned, the DDC vs D5 are slightly different from each other D5 is made for the Protium series so that the D5 pump and pump attachment can be utilized independently of the pump housing and afterward retrofitted. 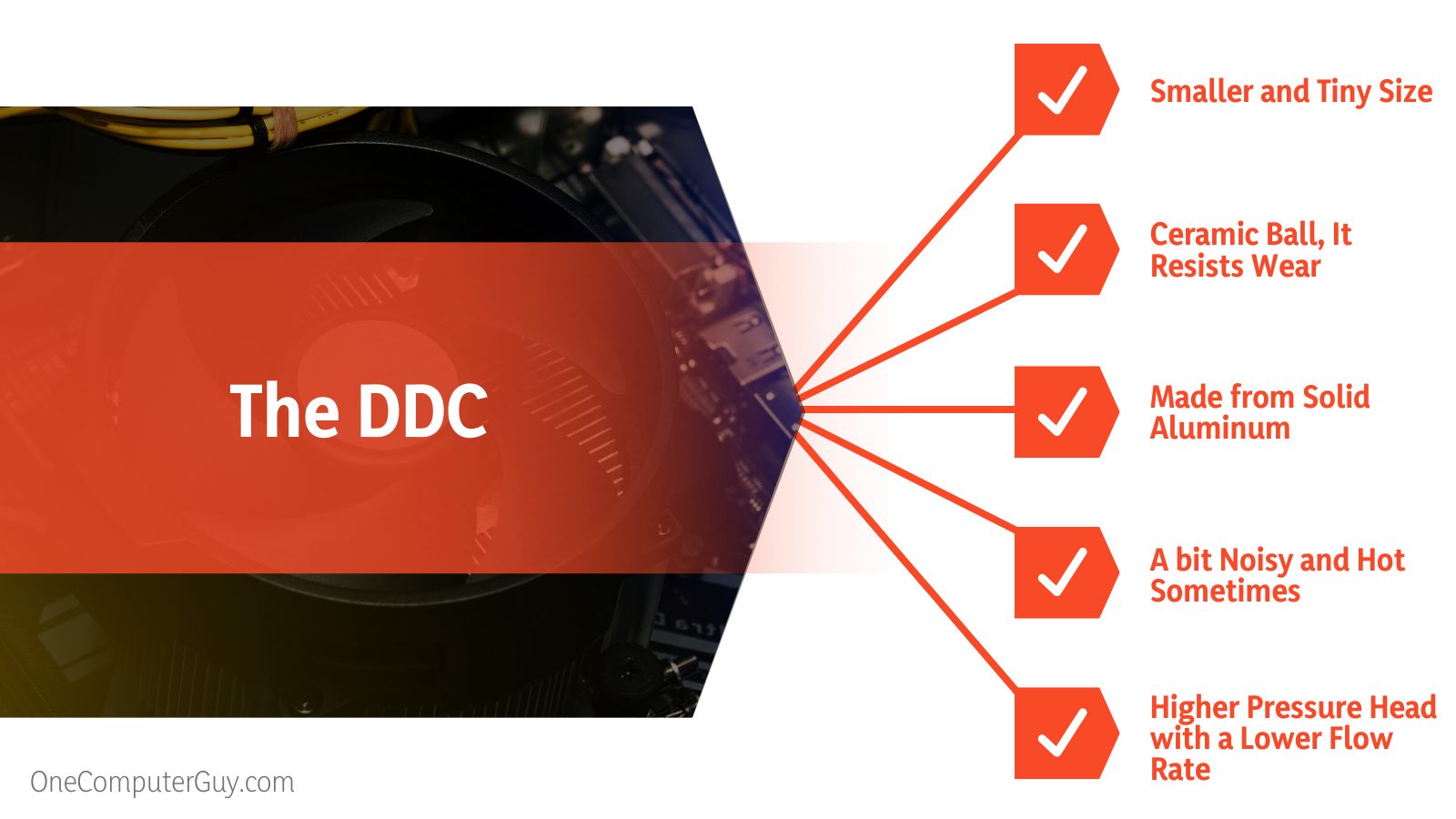 Anodized aluminum and stainless steel connectors are used to make the pump housing. Totally matte black makes up this variation. The pump housing’s lid is embellished with the maker’s emblem.

Because the Retention Ring can be removed from the Cover Body, it works with all D5 pumps, including the Aquacomputer D5 Next and Aquabus pumps. The Protium D5 Pump Cover has anti-vibration foam on the Cover Plate and enhances aesthetics while quietening the pump. It is offered in Silver and Black.

Both the top and bottom are made of solid aluminum. Your pump will be kept as cool as possible by the heatsink’s fins. The acrylic top has been modified for ideal flow. To keep your pump quiet and show it off in the best possible way, the enclosure has integrated vibration dampers and 360-degree RGB illumination.

The casing of a DDC pump is aesthetically pleasing and unobtrusive thanks to its anodized finish and available black or white color options. Users are able to observe their coolant flow through the pump’s acrylic top and 360-degree RGB illumination, which also helps the device stand out more from the crowd.

Talking about the D5 vs DDC pump noise is controversial because it is a subjective matter. So comparing the water pump in terms of noise, D5 is considered a reliable pump. D5 is a silent pump and variable speed and has not much sound as DDC; it has a lower-pressure head but carries more water and has minimal sound. D5 is a better choice, with satisfying performance and longer life.

A DDC cannot be run at more than 55 percent RPM without sounding louder than we would want, and even at this speed, it still sounds like a fish tank. DDC has a flow rate of 1000 liters per hour and 5.2 meters of pressure at 100 percent RPM. D5 at 70 percent RPM has twice the flow rate with roughly the same head pressure as DDC at 50 percent RPM while producing the same amount of noise or less.

At full speed, its fans are as loud as or louder than either of these pumps in terms of noise; the DDC has a little higher pitch than the D5, such as the EK-XTOP REVO.

Coming to the difference in flow rate DDC vs D5, the D5 pump has a theoretically higher flow rate of 1500 liters per hour and a lower head pressure of 3.9 meters. PWM is capable of controlling the EK-D5 PWM G2 Motor.

The DDC pump is perhaps the first pump in history to be utilized in a large-scale liquid-cooled workstation. The DDC pump soon entered the hands of lovers of liquid cooling because of its compact size and high output.

The EK-XTOP DDC 3.2 PWM model and the EK-DDC 3.25 have maximum flow rates of 1000 liters per hour and maximum head pressures of 5.2 meters for the DDC pumps, respectively.

What Are the Best Features of D5?

The D5 pump has a higher flow rate of 1500 liters per hour with a pressure head of 3.9m. It runs smoothly with almost no heat, which means it has a longer lifespan. It doesn’t have any sort of disturbing noise. The pump’s MTBF is 50,000 hours if the surrounding temperature is 77 degrees Fahrenheit.

What Are the Best Features of DDC?

DDC is a higher-reliability industrial pump that has a good pressure head of 5.5m with a flow rate of 1000 liters per hour. It is smaller in size and is easy to install in systems. It is a better choice with complex loop water circulations on a large scale.

The DDC pump operates using the same basic spherical motor principle as the D5 device. A ceramic ball that resists wear and tear is positioned atop a permanent magnet impeller rotor with a spherical shape. 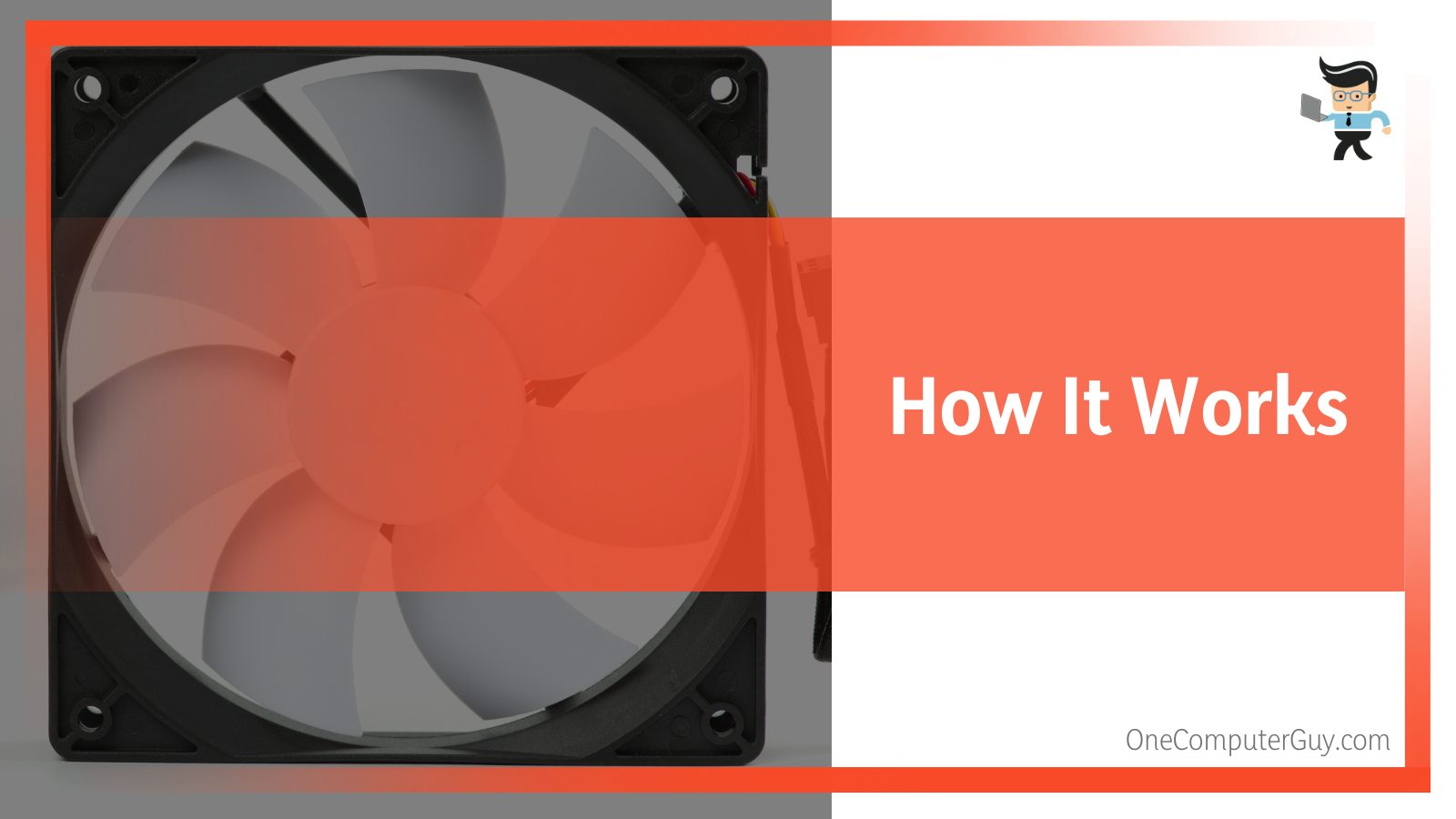 PWM control enables automatic pumping speed modulation based on CPU temperature. It is built inside the EK-DDC heatsink housing, improving the motor’s cooling capacity and extending the life of the water pump.

The fundamentals of the D5 vs DDC pumps have been covered, and while the DDC has higher pressure but lower flow rates, the D5 can provide greater flow rates at a lower pressure.

It’s also vital to be aware that small DDC pumps might occasionally be a little noisier than D5 units, and due to the DDC’s smaller size, it can also become a little warmer, which is why there are more pump heatsinks on the market. Although these heatsinks are not required, they could save wear and increase the pump’s lifespan.

A pump with high-pressure DDC will be advantageous if you are constructing a complex loop with numerous angled adapters and numerous water blocks. Again, the DDC would be a better option if you were designing a compact form factor PC with a limited amount of room.

The PWM versioned D5 might be the best all-rounder as it operates cool and quiet and has high flow rates. One D5 may even often operate for several years without overheating. 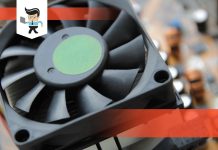