The difference between Samsung 850 EVO and Crucial MX300 is evident in four different categories: the size of the drive available, the speed at which data can be accessed, the write endurance, and the warranty. 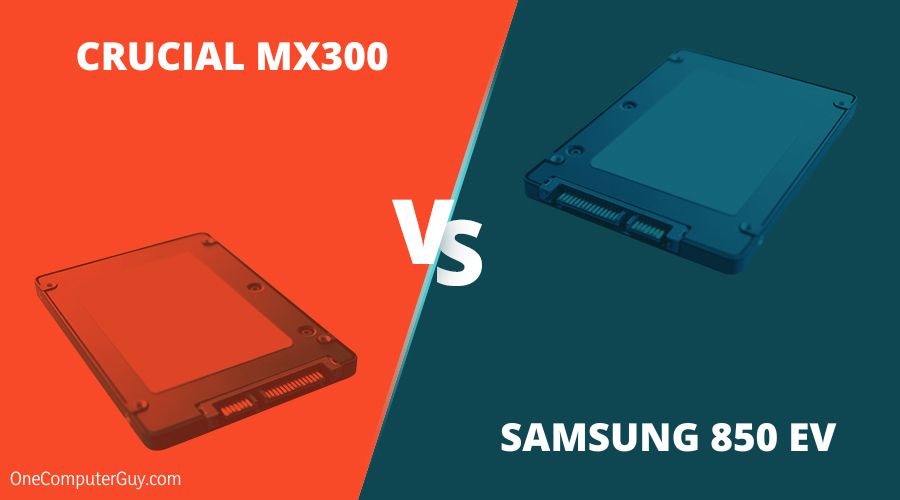 Each of these categories has different significance depending on the user, and therefore it is important to take a look at how each drive measures up against the other to understand which is the better choice.

The Samsung 850 EVO is a direct upgrade to its predecessor, the 840 EVO also by Samsung, and it is the first drive to feature technology which allows for stacking the chips to provide more storage in a smaller footprint.

In the modern world where we have windowed cases that show off motherboards and memory with full RGB color profiles, the design aesthetic of the Samsung 850 EVO is something to consider. The 2.5 inch SSD has a black casing that will blend in with the other interior components and not draw attention to itself, unlike the other lighted components you may have on your computer.

Unlike earlier SSDs where the flash memory cells were arranged next to one another in a two dimensional plane, the chips in the Samsung 850 EVO are stacked up to 32 layers deep. This reduces the space necessary to house the processing cells and increases their density, effectively leading to more storage for less money.

The Samsung 850 EVO also boasts a 5 year warranty covering the drive. While this is not as extensive as the ten year warranty that Samsung offers on its top of the line 850 EVO Pro, it still outstrips the 3 year warranty offered by the Crucial MX300 SSD.

The Samsung 850 EVO is one of the fastest Samsung SSDs available on the market, consistently outperforming its competitor, the Crucial MX300, due in large part to the capability for overprovisioning that the Samsung 850 EVO has.

A solid state drive’s lifespan is measured by the number of write cycles it can undergo, and the Samsung 850 EVO is approximately 6000 cycles. In contrast to conventional drives, the mechanics of solid state will not degrade when they are only reading data. This means a solid state drive only undergoes wear when writing data, not when reading it.

Samsung’s warranty includes a provision for the total amount of data written to the drive as well, which for the Samsung 850 EVO is 75 terabytes written to the drive for the 120 GB and 250 GB sizes, and 150 terabytes written for the 500 GB and 1 TB sizes. What this means is that you can write 40 GB a day, every day, to the drive, and it will still be five years before you exhaust the write provision for the 120GB and 250GB sizes. For the larger drives, this will take even longer.

40 GB is a lot of data, so unless you are downloading a new, high-demand videogame to your drive every single day, the drive will last you longer than five years based on those standards. In all likelihood, you will be replacing the rest of the components in your computer at least once before you have to replace your Samsung 850 EVO

The Crucial MX300 drive is the second production SSD to use 3D flash technology for the chips. The Samsng 850 EVO was the first, and like the EVO it has the chips stacked so that there is more data storage in less space than in earlier SSD’s. Think of this as the difference between a high rise apartment building versus a single-family home, and the difference in density versus linear space when they are stacked on top of one another.

Crucial proudly uses Micron chips to build their products, from SSDs to RAM, and as one of the three main manufacturers of chips, Micron knows how to build silicon chips and do it well.

Crucial is also lacking in performance compared to the Samsung because it does not give you the ability to customize overprovisioning. Overprovisioning is a set amount of storage space on the drive that is set aside and helps improve the drive’s efficiency. Another feature Samsung has that the Crucial does not is the ability to boost speed by borrowing from the computer’s system memory and using it as a cache for the drive.

Both of those features contribute to the fact that, while the Crucial MX300 is faster than conventional drives and faster than a lot of the lower cost SSD’s on the market, it is definitely slower than the Samsung 850 EVO, which may not matter to some users who only want to upgrade their computer from the conventional drive they were using before.

As discussed with the Samsung 850 EVO, the endurance of an SSD is related to how much data you can write to it over the lifetime of the drive, because SSDs do not undergo wear when they read data which is stored to the drive.

Both of the drives have a write endurance that average computer users are not likely to exceed in the lifetime of their usage. Writing 40 to 50 GB of data per day to the drive would still take between five and ten years to exhaust the write endurance of either the Samsung or Crucial SSD.

In that ten year time frame, users are likely to upgrade the internals of their machine, and technological advancements being what they are it is highly likely that a larger, less expensive drive will be available on the market. Users are more likely to rebuild their computer at least once and probably more than once in the time it would take for either the Samsung or the Crucial to fail do to too many write operations or too much data written to the drive.

Crucial’s SSD comes with a 3 year warranty against manufacturing defects, which is significantly less than Samsung’s 5 year warranty. Unless something is seriously wrong with the drive, the Crucial warranty should cover any problems which arise, as most people will see fairly regular use of their drive within those initial three years, and issues will manifest themselves.

If you are overusing the drive and hit your write endurance within three years (but let’s face it, it is almost impossible to use your drive so much that you exceed the wear tolerance of the solid state drive) then the warranty will not apply because you have exceeded the duty rating of the equipment.

Other things can void the warranty, like inappropriate handling or storage. Treat your SSD nicely. While shocks and impacts will not ruin a solid state drive like they would with a conventional hard drive which has moving pieces and a reader that needs to find the place on the drive where data is stored, they do still need to be treated with care and avoid exposure to moisture and abrasive agents.

Crucial has a smaller number of drive sizes available, but their smallest drive is bigger than Samsung’s two smallest, and they also include a 750 GB size whereas the Samsung jumps directly from 500 GB to 1 TB.

Samsung has higher performance across the board in random read and write with higher IOPS, but Crucial has a higher potential for sequential read and write speeds, which may not always be matched by real world use cases.

The write endurance of the Crucial drive is significantly higher than that of the Samsung. At certain available storage capacities, the Crucial drive will last more than twice as long as the Samsung drive, but either of them is not likely to wear out before the user wants to replace their computer.

The Samsung drive offers a 5 year warranty in comparison to Crucial’s 3 year warranty, which can provide peace of mind to some users that they don’t have to worry for an extra couple of years about having to get a new drive if their current one fails.

If you are on the fence between choosing a Crucial drive or a Samsung drive, consider what is most important to you. If you want a stable drive with faster access speeds and you only need a 120 GB drive and don’t mind that you can only write 75 TB of data to it, then the Samsung is the choice for you.

If you know you need something between 500 GB and 1 TB, you will be using the drive almost constantly for read and write applications, and you are likely to replace it in the next few years when you rebuild your computer anyway, then you can comfortably choose the Crucial drive.

Keep in mind that for similar sizes, the Crucial will be less expensive than the Samsung because it does not offer all the same features, and it is a smaller segment of the market share than Samsung is. If you are making your decision based on cost alone and not the specifications, then definitely the Crucial SSD is right for you.