If your computer screen looks like TV static, you have a right to be confused because, in the 21st century, static is just not cool, especially not on a modern computer. We have compiled this guide to get to the root of this issue and clear it up once and for all. 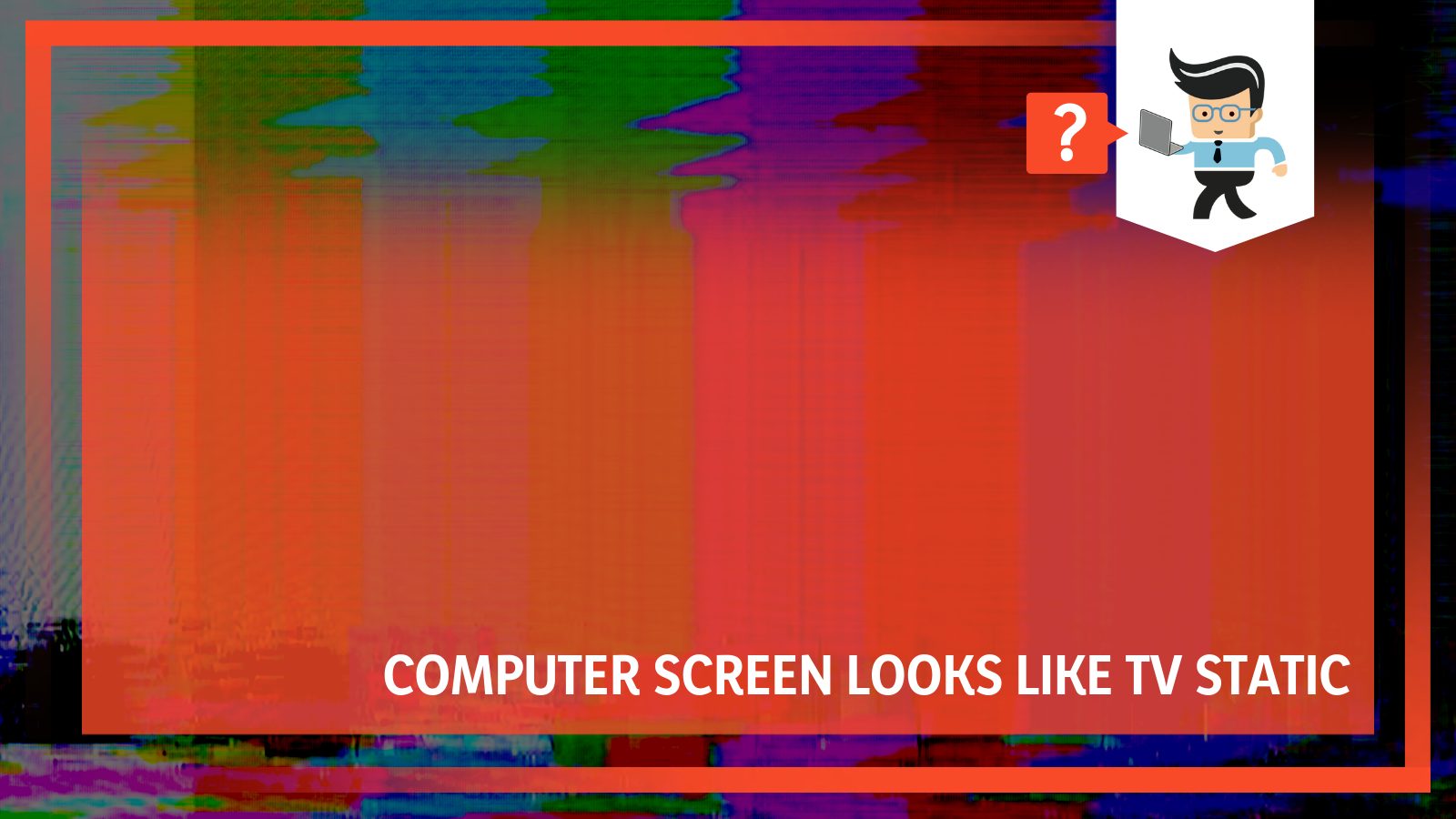 This article will look at the possible reasons for this display error and how PC users can enjoy their monitors without any static-related issues.

Read on to learn everything about computer screen static issues, whether you are streaming on Netflix or just trying to use multiple display monitors, in the sections below!

The computer screen looks like TV static because of multiple reasons depending on the app, OS system, and graphics card you are using. One of the more common reasons for computer static is interference by add-on hardware and other electronic devices being too close to the computer screen in question. 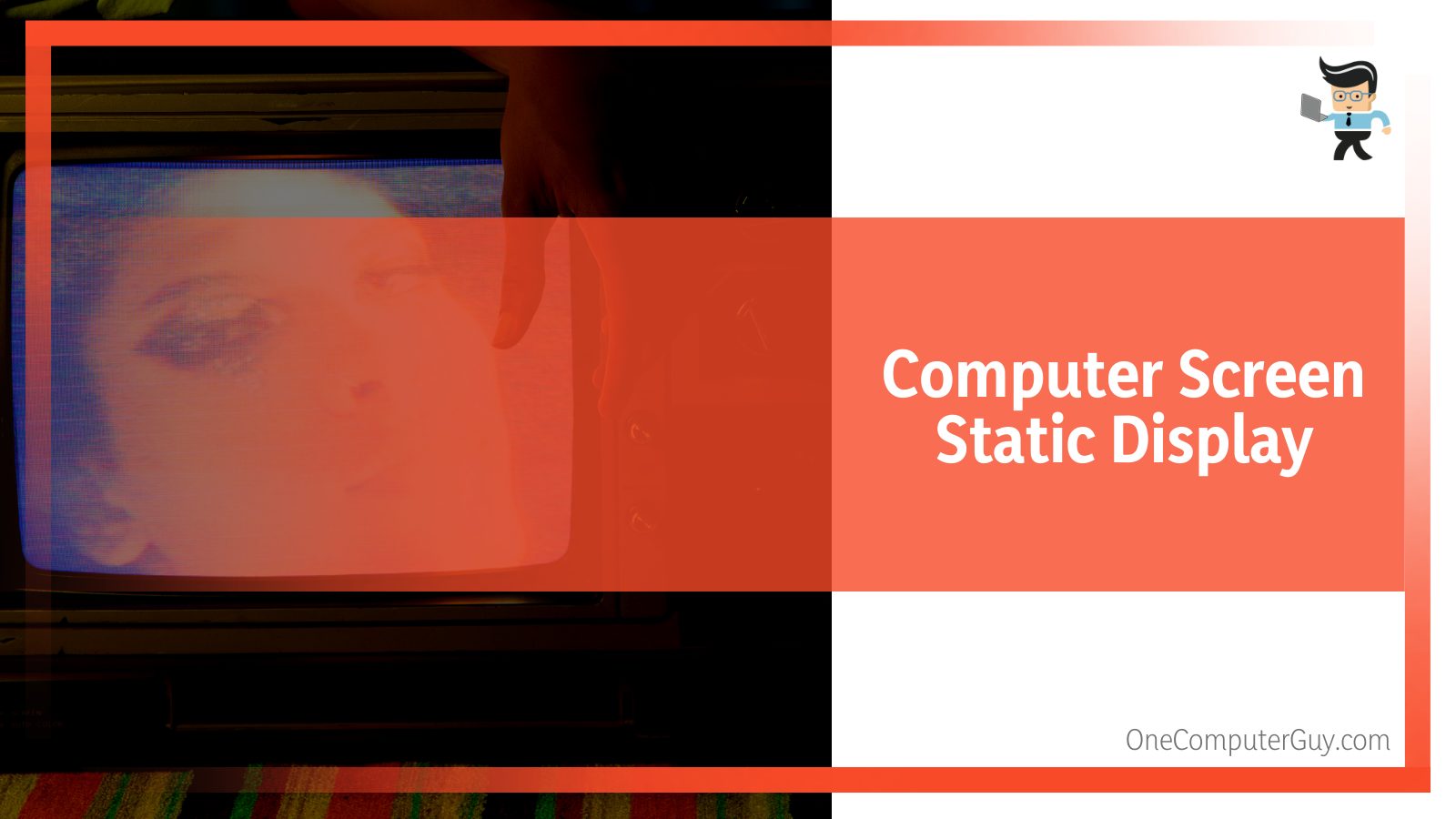 A lot of users ask why is my laptop screen static and how to fix static screen on laptop, as the issue is quite annoying. If you are facing a static problem on a specific device, namely an HP laptop, you might need a more direct approach to solve it.

For instance, if you are using an HP laptop and you face the problem of unwanted static, the problem could be caused by Microsoft updating your PC to the Creator’s Update to the 1703 version.

You can prevent such issues by downloading the latest graphics drivers from any reputable provider like Nvidia, AMD, or even HP. It would be best if you did this after determining which graphics driver is suitable and compatible with your PC system. After you are done, you need to disconnect your PC from the network, install the new drives, and you will be good to go.

Netflix users often report static on the streaming service when they use it. Users report a signal cut-out that lasts anywhere from one to three seconds, after which there is only static displayed on the screen with no sound. After that, the signal comes back on as if there was no change to begin with.

It is also noted that most users face this issue two to three times every half an hour, and it is a Netflix-specific issue as it doesn’t occur when using other streaming services like Amazon Video, Kodi files, or DVDs.

If you have also faced this static problem on Netflix, you can solve it easily by solving the troubleshooting solutions given below that work for most users.

How To Fix Your TV Like Computer Screen Problem?

The computer screen looks like TV static problem can be solved by taking care of any devices that you have plugged into the same circuit as your device. You can also try to troubleshoot the PC and adjust the screen resolution of the monitor. 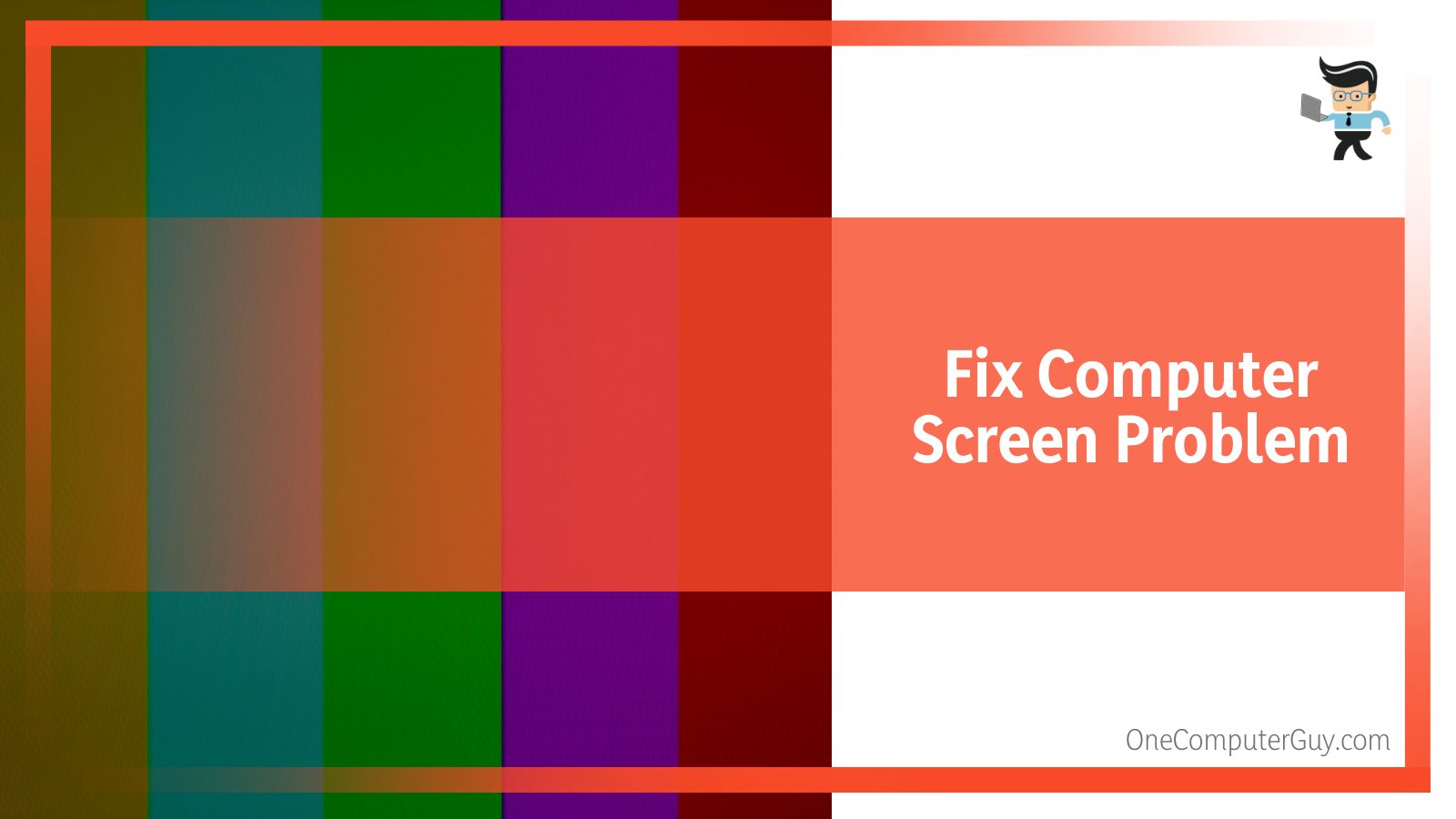 Some users report irregular static while using Netflix, while others find static screen Windows 10 to be a prevalent issue when using multiple monitors. Fixes for each of the errors in this section are discussed in greater detail in the sections below.

If your computer screen static lines are quite prevalent, you need to keep other electronic devices like rotating fans, cordless phones, and cell phones away from the computer screen. You need to ensure that none of your electronic devices, whether big or small, is too close to your computer monitor or plugged into the same circuit as it. This will solve your issue of the annoying white static screen pc problem.

Other things that you can do to limit the blue static on screen is reducing the interference caused by add-on hardware, including but not limited to port replicators, signal splitters, docking stations, and others like them.

– Adjusting the Screen Resolution for Your Monitor

If you are affected by static when you are watching your computer screen, you can try to solve the issue by adjusting the resolution of your monitor. Here are the steps to complete the process easily. You have to start by selecting the start button, and after that, you need to search for the Control Panel app in the search bar.

Once the Control Panel app opens up, you need to go to the Appearance and Personalization section. When you are in that section, go forward and select the option titled Adjust screen resolution. This is the section where you will be doing most of the work for this solution.

After you are finished with this, make sure you click on apply to save and implement the changes you have made. Once you have followed all the steps in this section, the static issue you are facing should subside.

– Changing Display Settings of Your Monitor

You can solve the static issue on Netflix by right-clicking on the desktop, after which you need to select display settings and switch to advanced Display settings when you are there.

In the Advanced Display settings option, you need to find the tab titled Display Adapter Properties, and from there, you have to select the Monitor tab. You need to select the Screen Refresh rate, which you will edit. For the purpose of this fix, you will need to set the screen refresh rate to 120 Hz, something even lower.

After you have applied these changes, you can try Netflix again, and it should work perfectly then.

You can also solve the issue by bypassing any HDMI converters. You can do this by connecting your monitor directly to your computer. Another that you can do is switch the ends of your HDMI cable or try a new one altogether if your setup relies on HDMI cables.

If you use multiple monitors, you can try solving the issue by unplugging them all from your computer, after which you can plug them back in one at a time. Make sure you keep trying Netflix after each attempt of doing that.

The last resort is checking if your monitor has a copy protection issue. This is most likely to be the reason if the issue only happens on one monitor. To solve it, you can go the recommended step of contacting the monitor’s manufacturer for assistance, or you could also leave the device disconnected when you are streaming to avoid disturbance.

– What Is the Snow Look on Computer and Laptop Screens?

The snowy look is another name for common static. It is basically a random pattern that has been superimposed on the monitor’s picture. It will therefore be visible as a random flicker comprising “snow” or “dots”. 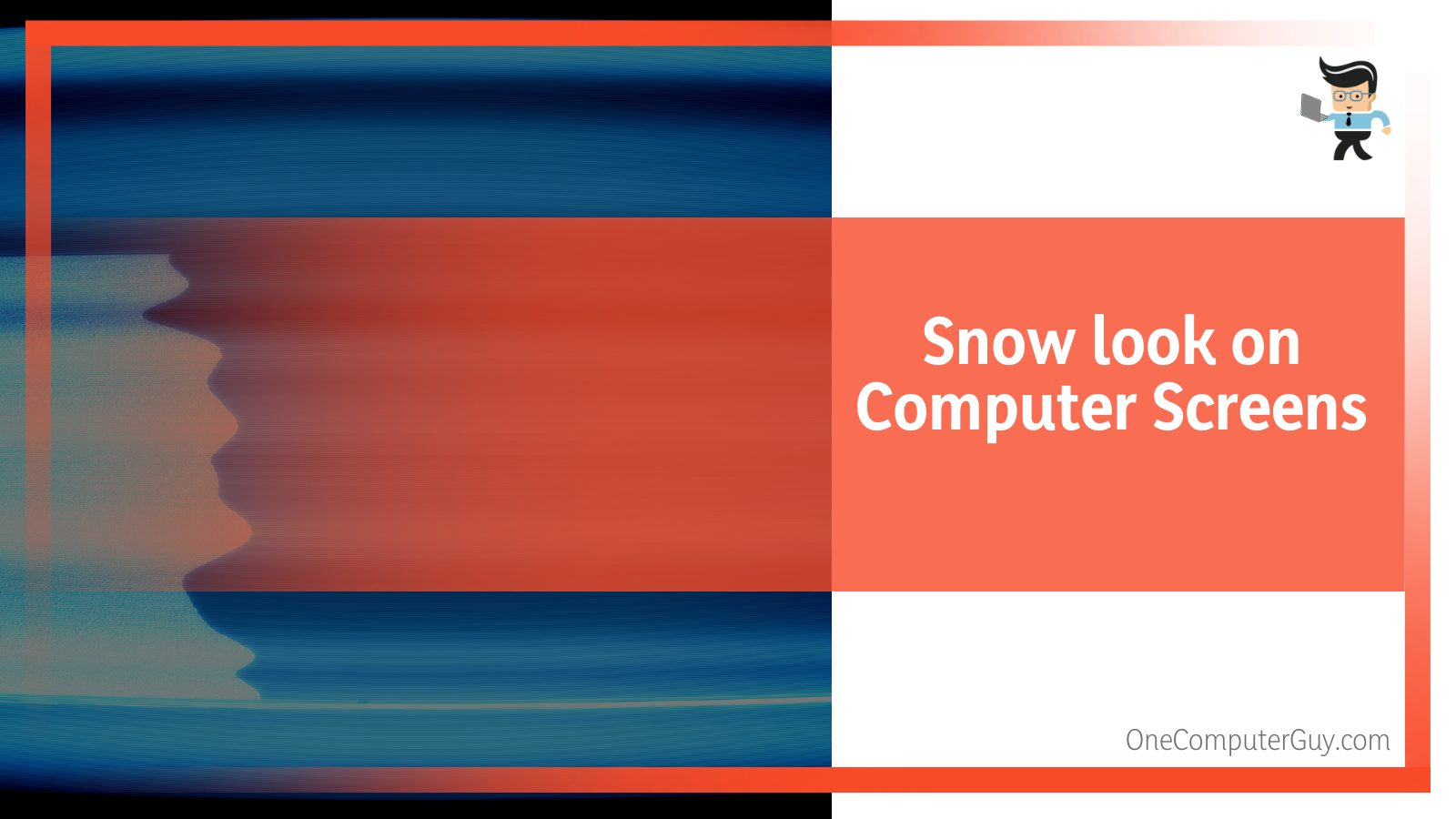 However, it is equally possible that a snowy look is caused by electronic noise that is disturbed or electromagnetic noise that has been radiated and gets accidentally picked up by the antenna on your computer.

While this effect is famously associated with blank VHS tapes and analogue TV sets, in that it is almost a staple of entertainment, it is also seen on regular computer monitors now. When perceived on a monitor or a TV screen, a snow picture is usually caused by a poor signal, and it can also be the result of a TV set on the wrong input.

– How Can I Fix the Snow Look on Computer Screens?

To effectively solve the issue, you must ensure that all of the cable connections that go from the receiver to the TV screen and the wall outlet to the receiver are completely secure. It is also important to ensure that any components in the middle, like the sound system, are secure.

– Should I Remove External Devices To Fix Computer Screen Static?

If you want to learn an easy technique on how to fix static screen on PC, you can do it by moving the other electronic devices you have as far away from the monitor as possible. Devices that are external and further from your actual computer system can cause static issues with your PC.

Issues like monitor static can also be caused by factors that are outside of your house. This would include things like a telephone company transformer, as one example. To combat this issue, you can try moving your computer device and monitor to another location in your room that is further from the affected area. It is also advisable to remove the computer system from the room altogether.

With this section, we have finally reached the end of our guide, and we hope that in the course of this discussion, you have learned a lot about why static still happens on some monitors during various activities. We have compiled a summary of bullet points that will help you remember the most important points of the article:

We hope you have learned all the real causes of static for modern computers and how you can solve any issues that pop, whether with multiple monitors, a copy protection issue, or a simple Netflix error. We wish you the best of luck with getting your TV static under control, and with this guide, you shall be on a roll already!