Considering a dual graphics card setup and wondering if SLI is still worth it? The dual graphics card debate has been around for years now, with many claiming that SLI is a “dead” technology. Is SLI really over or is this an overstatement?

In our opinion, SLI is not a wise investment for most gamers today. If you’re looking for a performance boost and better graphics, most should probably just invest in a single powerful GPU instead of doubling up on GPUs. 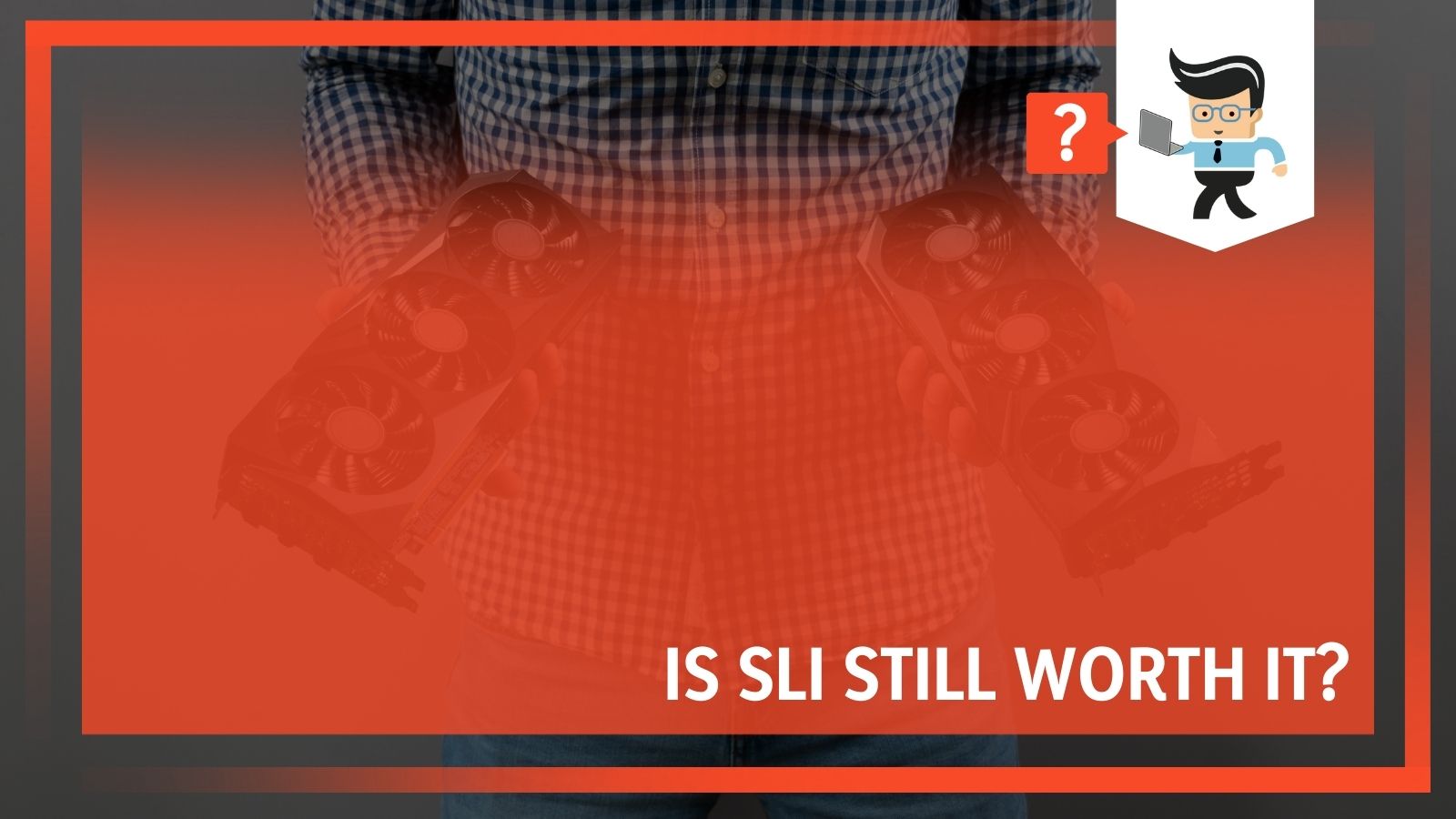 However, SLI isn’t dead, and for a small minority of gamers on the cutting edge of gaming, SLI is still a viable option. This will really only be applicable to those who game on maximum settings with a 4k 144 Hz or 8k monitor, for which you’ll actually need two GPUs to keep up with the high demand for pixels and frames.

When playing a SLI compatible game, using SLI will certainly provide a performance unbeatable by anything a single GPU could do. If you game with high settings, high resolution 4k, 5k, 8k, 16k) and high refresh rates (144 Hz and above) SLI will allow you to get the most from your technology.

A huge benefit of SLI is that it allows you to increase the image quality without sacrificing graphical fidelity. Graphical fidelity is basically everything that makes for beautiful games: detail, resolution and framerate.

If you typically run at a higher refresh rate than your monitor allows, SLI allows you to maintain playable framerates while simultaneously increasing the graphical fidelity.

There’s no denying it, SLI looks pretty cool. If you want to make your gaming rig look as amazing as possible, the dual graphics card setup will certainly make your PC stand out if you plan on showing it off. Even those who don’t like SLI have to admit that the look of two graphics cards together in a PC is pretty impressive. 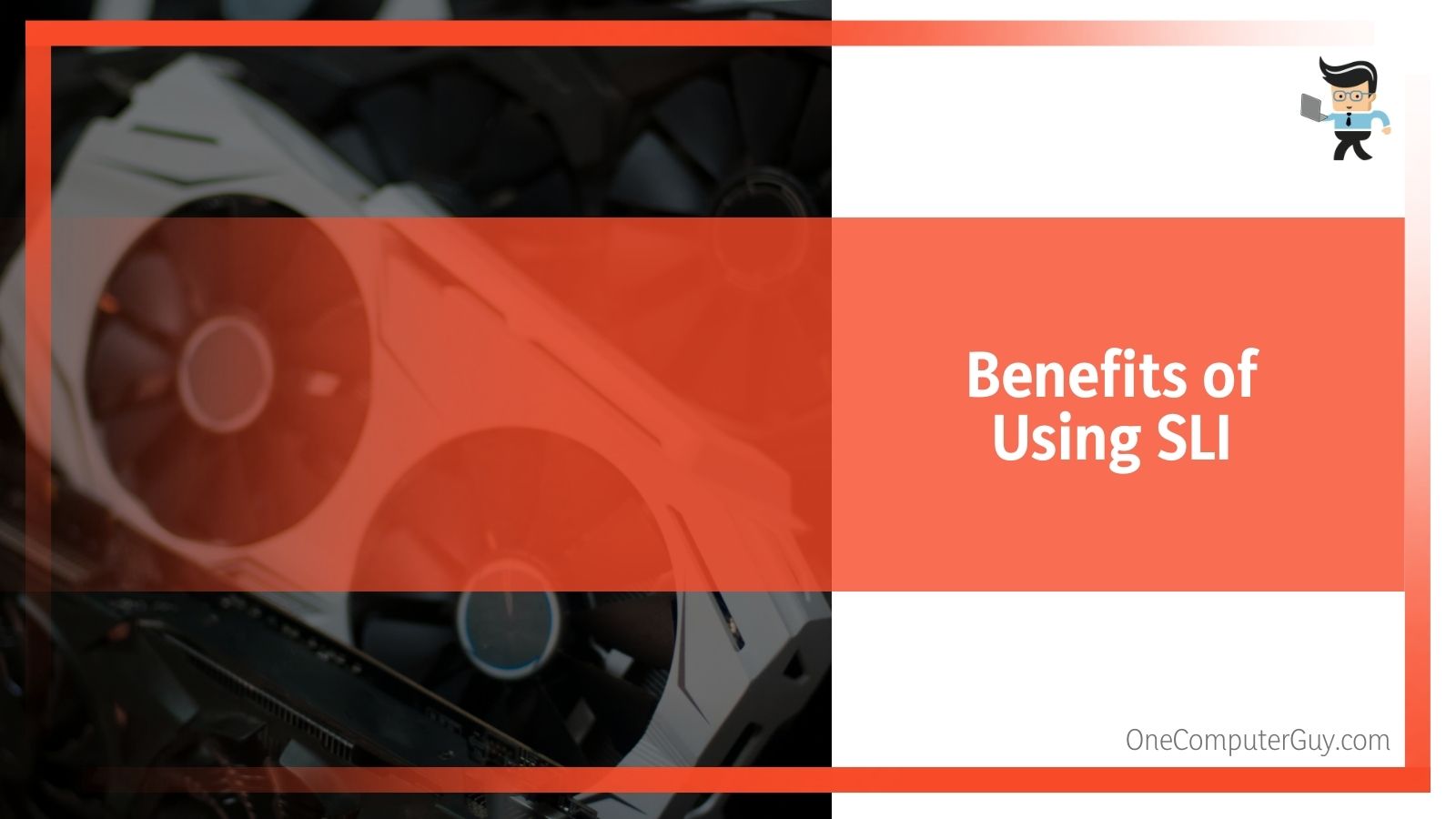 While this isn’t the only reason to choose to use SLI, if you seriously think your system could benefit from an extra graphics card, then the aesthetics are certainly an added bonus.

You might think that having two graphics cards will double your performance. Unfortunately, that’s not true. For twice the price of a single GPU, you’re simply not getting twice the level of performance. While it does lead to a benefit, it’s really not the proportional to the amount you’ll spend on the extra graphics card.

Using multiple graphics card requires a huge amount of power, so don’t be surprised if you get a huge electric bill the next month! Dual graphics card setups also cause a huge increase in heat output. Think about how hot your PC gets just from one graphics card, then double it.

Make sure your PC is equipped with the proper hardware to handle this kind of power usage and heat output. You may need to invest in a new power supply which can provide the power you’ll need to operate SLI. The increased heat may also turn into an issue, especially if you live in a hot climate.

Overall, you must be prepared to spend a lot if you want to use SLI. In our opinion, the benefit really isn’t enough to justify the high costs of operating.

3. Games Must be SLI Supported

A major downside to SLI is that in order to reap the benefits while gaming, the game you’re playing must be SLI supported. Developers actually have to add extra lines of code to their games in order to make them supported by SLI, after which Nvidia has to publish an SLI profile for the game. If you’re using a game that’s not SLI supported, your second graphics card will simply sit unused.

These days less and less games come with SLI support. Because of the decreasing popularity of SLI, developers have shifted their focus from including SLI support to improving other aspects of their code. When playing those games, your SLI won’t give you any added benefit.

However, if most of your games are SLI supported and some have even said SLI might cause a performance drop, it’s better to steer clear.

Unfortunately, even in games which support SLI, you may encounter small glitches which can decrease the quality of your gaming experience. If you installed SLI, you’ll be expecting the best possible gaming experience, which makes these micro glitches an irritating feature.

These micro stutters will usually stop if you disable SLI while playing. This makes it not worth it to use SLI for that particular game in which you’re experiencing glitches. While it is possible to get rid of the micro stutters by researching solutions and tinkering with your settings, it’s probably something you’d rather not deal with in the first place.

5. Must Turn SLI Off Before Playing Non-SLI Games

This is something relatively minor compared to the other downsides mentioned above, but it is still worth mentioning. This is particularly a problem because so many games today don’t support SLI.

Therefore, if you switch from one game that supports SLI to another that doesn’t, each time you will have to go into the Nvidia Control Panel to disable SLI before playing. This is an irritating step which makes having an SLI setup an added inconvenience.

Why Was SLI Previously So Popular?

The fact that SLI is still in common discussion in the gaming community is because it used to be much more common than it is today. Why did it use to be so popular and what changed to cause its decline?

SLI, which stands for Scalable Link Interface, is a proprietary parallel processing technology by Nvidia which allows multiple GPUs to connect and work in the same PC. This is facilitated by a SLI bridge which transfers data between the two GPUs.

Initially, SLI didn’t stand for Scalable Link Interface. It was actually developed in the 1990s by 3Dfx, a company since acquired by Nvidia, and was called Scan Line Interface (SLI). This operated the same way – by linking together two GPUs.

The first graphics accelerator line to use SLI technology was launched in 1998, however it was not a huge commercial hit. After Nvidia acquired 3Dfx, they inherited the SLI technology however they didn’t do anything with it until 2004, when it was launched as Scalable Link Interface.

Back in the 2000s, SLI was an effective and easy way to essentially double your PC’s graphics abilities. SLI was essentially the only method of maximizing your graphics and gaming on ultra-settings back then. It wasn’t just for a small niche of enthusiasts; rather, a huge amount of games were SLI compatible and even mid-range GPUs has SLI support.

What has changed since then? In the past 10 years or so we’ve seen increasingly powerful GPUs coming out on the market. These GPUs are capable of meeting the requirements of ultra-gaming and don’t need the added boost of another GPU alongside it. 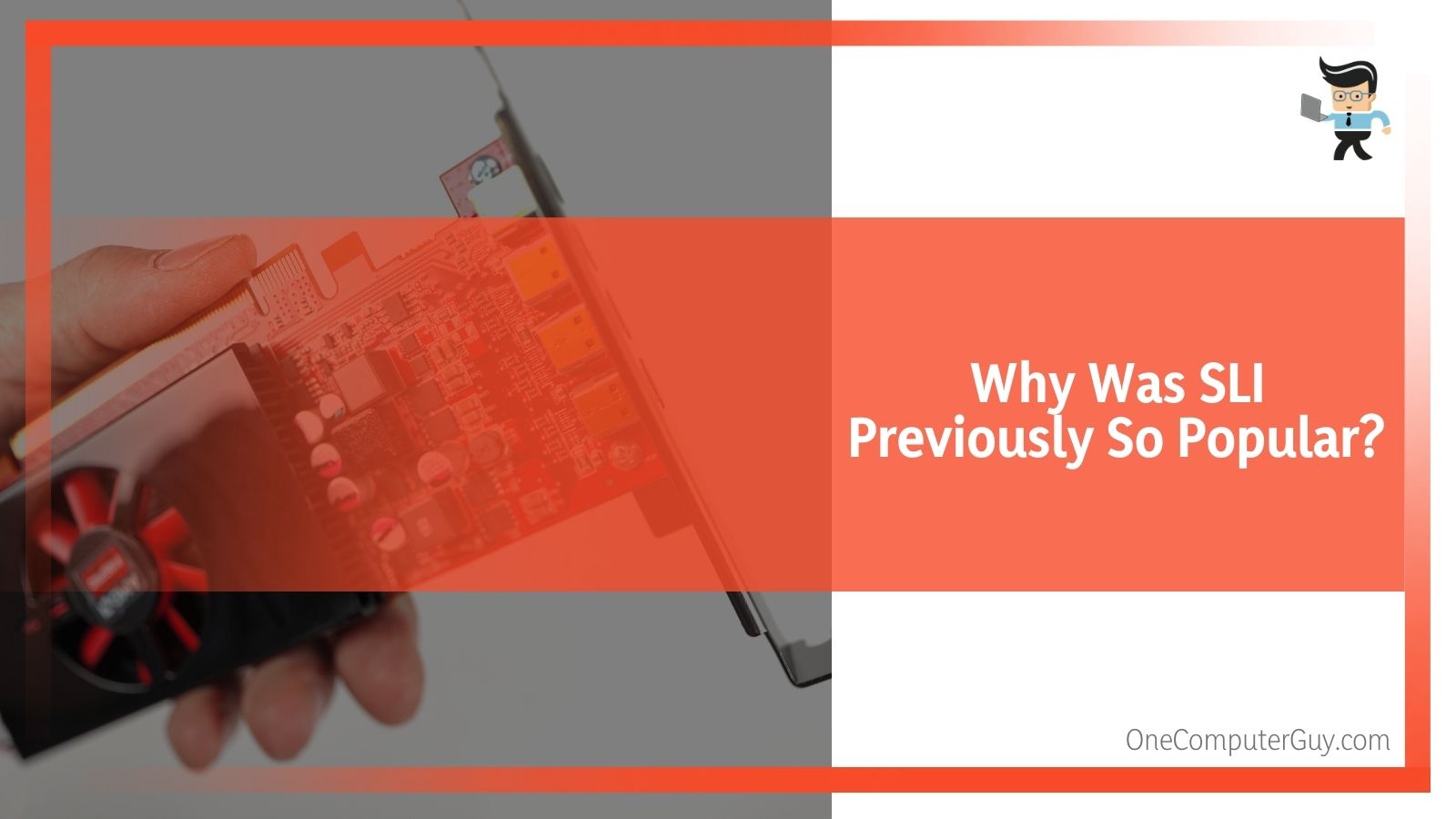 This made SLI unnecessary for those satisfied by these more powerful GPUs. This decreased demand for SLI led to fewer game developers integrating SLI support into their games.

However, this isn’t to say that SLI is a dead technology. To this day Nvidia still produces new high-quality GPUs with SLI capability and a good amount of games still integrate SLI support. It seems that SLI will continue to be used by certain enthusiasts who desire the absolute cutting edge of graphics and aren’t satisfied by what one single GPU can provide.

Usually these gamers will be using 4k or 8k monitors with 144 Hz or higher which necessitate an enormously powerful graphics unit and aren’t bothered by the increased cost involved with higher power use and heat output.

How Does SLI Work?

SLI works on a so called “Master and Slave” basis, in which one card works as the “master” in charge of providing the display with the finalized 3D rendered graphics. The SLI bridge is the key piece of hardware necessary for facilitating communication between your GPUs. This allows them to circumvent the motherboard and avoid having to compete for bandwidth.

There are three different modes in which SLI operates. Each of them is simply a different way in which the processing work is split up amongst the GPUs. One mode is called Split Frame Rendering, which is where the rendering workload is split up horizontally in pieces according to 3D complexity. These pieces are then assigned to the GPUs equally and proportionally.

The third mode is called SLI Anti-Aliasing, which shares the job of anti-aliasing and therefore doubles (or tripling or quadrupling depending on how many GPUs you use) the GPU’s anti-aliasing abilities.

Want to Use SLI? Here’s What You Need

If you’re still interested in taking on the challenge of setting up SLI on your PC after reading through the pros and cons, the good news is that SLI isn’t very difficult to set up. However, it will require some specific gear and a nice chunk of money.

The first thing you’ll need are two or more graphics cards. However, it’s important to note that SLI will only work if your graphics card have two things in common: both GPUs will need to be based on the same graphics processor and will need to have the same amount of onboard memory. 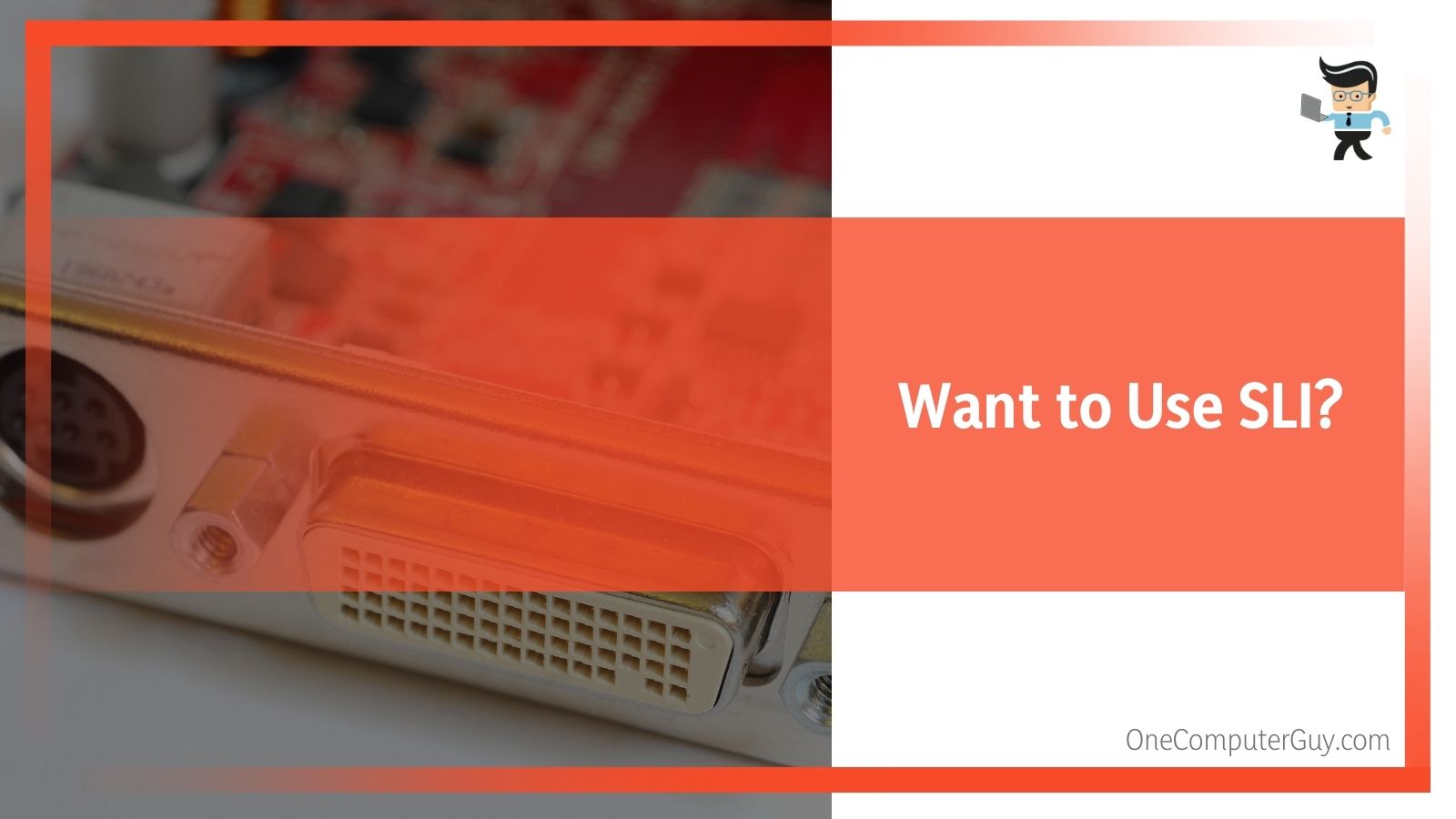 Beyond the two graphics cards, you’ll need a SLI ready operating system and an SLI certified motherboard with 2 PCIe X16 slots. You’ll also need the SLI bridge for linking the two graphics cards and finally, make sure your PC has a power supply which can provide enough power you need for the cards you’re using.

That’s quite a few items and can quickly turn into a small fortune to acquire all the necessary parts. That’s why we’re only recommending SLI for those who don’t mind spending the money in exchange for a simply minimal performance improvement.

SLI really isn’t worth it today for the vast majority of gamers. Even if you want to play on ultra-settings, you’d be better off investing in one single powerful GPU which will provide your gaming needs for much less money, time and hassle than SLI. For most, SLI will just be a waste of money that won’t produce much of a reward.

Is SLI dead? It might seem that way, with GPUs ever increasing in power and Nvidia phasing it out in certain new models. Even those new graphics cards which are enabled for SLI are overpowered enough that SLI won’t make that great a difference in performance to make it worth it for most.

However, it doesn’t seem that SLI will completely go extinct. While it may never reach its former popularity, it may continue to exist for a niche of power gamers who will actually benefit from dual graphics cards and don’t mind spending the extra money.