The best gaming monitor for GTX 1060 will be one with a resolution of either 1080P or 1440P. The GTX 1060 is a mid-range graphics card and will not make full use of a 4K display without sacrificing visual quality and framerate during high demand and realistic games.

In this article, we will examine four monitors and recommend the best value for use with the NVIDIA GeForce GTX 1060.

When comparing the Acer Predator XB241H, Viewsonic XG2401, ASUS VG248QE and AOC G2590FX, the Acer comes out on top as the best monitor to pair with the GTX 1060 graphics card.

While all the screens are similar in terms of size, resolution, and refresh rate, the Acer Predator offers G-sync compatibility for use with the NVIDIA GPU, flickerless technology to reduce eye strain and a 1 ms response time. The Acer lacks some of the additional ports available on the other monitors but makes up for it in low input lag, and good color quality for a TN display.

The Acer Predator XB241H has a plain black bezel, but the base is a wide-angle with the stand rising in the middle. Both stand and base have artistic cut-outs and the tips of the two sides of the base are accented in red.

The Acer Predator XB241H only has one HDMI port and one Display Port. This allows you to connect both your PC and gaming console to the same display, but does not offer any USB or audio ports.

The Acer Predator XB241H uses TN (Twisted Nematic) panel technology in the screen which offers the fastest response time and speed of the transition between colors. This fast transition time reduces blur and ghosting when playing games with lots of motion and action, even at high refresh rates.

Because the TN screen will sacrifice color depth and viewing angles in favor of speed, it does not offer deep blacks, bright whites, and other color quality. The narrow viewing angle (170 degrees horizontal and 160 degrees vertical) is less of a concern, particularly when used for gaming because you will be set up in front of it most of the time without the need to look at it from the side.

Because the Acer Predator offers G-sync compatibility, it can be set up to dynamically change the refresh rate in response to the input from the GPU. Unlike AMD FreeSync, which only works with AMD graphics cards, G-sync is an NVIDIA compatible technology and will work with the GTX 1060.

The Acer is also a flicker-free screen, meaning those sensitive to flicker will not have an issue with using the Acer Predator XB241H, even for long gaming sessions. 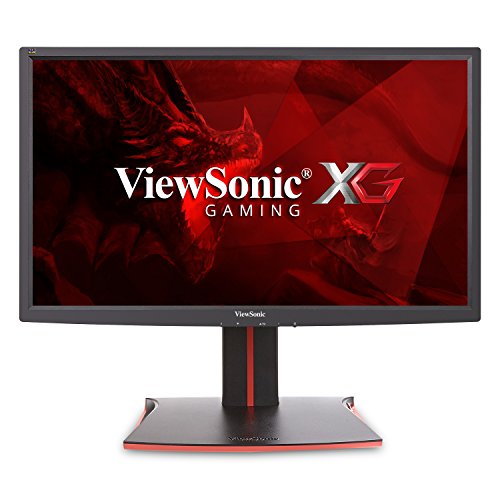 The Viewsonic XG2401 has a simple, utilitarian design with a rectangular black bezel and base. Lest you forget this is designed as a gaming monitor, red accent stripes adorn the front and back of the monitor stand and around the sides of the base.

On the backside of the monitor, there is a hook at the top for storing a headset and a cable management loop to consolidate the wires for power, display, and any USB devices attached to the display.

The Viewsonic XG2401 boasts 2 HDMI ports, a Display Port (required for AMD FreeSync), 2 USB 3.0 ports, 1 USB 2.0 port, and a 3.5mm audio jack. With these ports you have more than enough available space to plug in your PC, console, headphones, and other peripherals.

In addition to the two FPS modes, the monitor also has RTS and MOBA modes. These modes offer an incredibly sharp image useful for outlining characters in strategy games. In addition to these presets, there are an additional three customizable profiles that can be set up with any brightness, color, and specialty settings necessary for a specific game.

The Viewsonic XG2401 has a low input lag perfect for fighting games, however the AMD FreeSync feature is only applicable if you have an AMD GPU. The GTX 1060 is an NVIDIA product, not AMD. Even without AMD FreeSync, the Viewsonic offers a very smooth gaming experience. 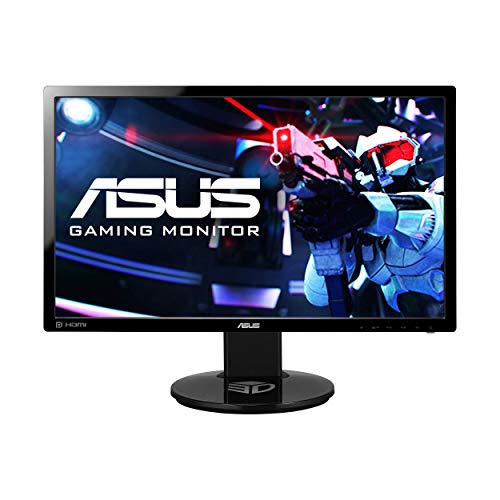 The ASUS VG248QE has a glossy (fingerprint alert!) black bezel around the screen that is somewhat thicker than other similar monitors. The monitor stand has a cable-control clip at the back for managing the wires necessary for connecting the display to source and power.

Unlike the Acer or the Viewsonic, it has only one red accent: the cable control. It also has an unobtrusive, round base that takes up a very small footprint on the desk.

The ASUS VG248QE offers the following ports: 1 HDMI, 1 DVI-D, 1 Display Port, 1 Analog 3.5mm out. You can connect up to three devices to this display and you can plug headphones into it to listen, but it has no microphone port in, so you would still have to rely on the headphone and microphone jacks on your computer when gaming.

With a native refresh rate of 144 Hz, the ASUS is equipped to handle most games smoothly, however, it does not support any sort of variable refresh rate like G-sync. It provides a smooth gaming experience due to low input lag. While the narrow viewing angle of the TN screen is less noticeable when camped in front of it for a gaming session, on this ASUS the sides of the screen still look washed out.

The ASUS VG248QE has a low contrast ratio, even for TN screens. At 686:1, blacks look slightly gray, and the washed-out effect is even more noticeable in dim lighting. For a brightly lit office setting, this is less of an issue, but it will not offer significant color depth for gaming.

The ASUS is not a flicker-free screen, but the flicker is a very high frequency which should make it unnoticeable to most people.

The AOC G2590FX is a frameless monitor with a red band at the bottom border of the screen. It has a round base like the ASUS and takes up a small footprint on the desk. It has no cable control loop or clip, merely a cut out in the stand to accommodate wires running to sources and power.

The AOC G2590FX is tilt-only and does not offer height adjustment, turning side to side, or rotating to portrait orientation on the stand it comes within the box. It is, however compatible with VESA if you want to mount it to the wall.

The AOC G2590FX boasts 1 Display Port, 2 HDMI ports, VGA, and a headphone jack. It is FreeSync and G-sync capable. FreeSync works over both display port and HDMI while G-sync only works over display port. These ports allow for connecting both computers and consoles to the display.

Because the AOC G2590FX is G-sync capable, you can enable variable refresh rate so the monitor can dynamically adapt to the GTX 1060, removing screen tearing and stuttering, and unlike VSYNC it will not introduce input lag, which on this monitor is roughly 4 ms.

When framerate drops under 30, the display will run low framerate compensation and increases the refresh rate proportional to the framerate to minimize stuttering until your FPS can recover.

As with all TN panels, the viewing angles cause shifts in color and contrast when viewing the screen from a skewed orientation, but most gaming is done face-on.

The AOC G2590FX offers slightly more screen real estate than the other monitors featured in this post, and it offers better color richness than older TN panel technologies

If you are used to running your games with higher video settings on a lower refresh rate, such as 60 Hz, using your GTX 1060 with 144 Hz monitor will give you a much smoother experience, but lights, shadows, ripple effects and ground density should all be reduced to allow the graphics card the energy to deliver high framerates instead.

The GTX 1060, while a midrange card, is more than capable of running two monitors at the same time. It is capable of running a game on one monitor and a web browser on another, though it is recommended that you connect both displays using the same type of output (both over HDMI, both over Display Port, etc)

The GTX 1060 can run three monitors without issue. It may struggle to run a game on the main monitor while web browsing or system management are running on the others. If you plan to run your computer with multiple monitors, it is recommended that you use identical monitors across your setup, and to the extent possible to run your displays over the same type of output (over HDMI, over Display Port, etc)

Of the four monitors reviewed here to use with the GTX 1060, the Acer Predator will give a lightning-fast gaming experience and seamlessly use G-sync to prevent screen tearing without introducing the input lag associated with VSYNC. Its flickerless technology will reduce eyestrain and prevent headaches in those sensitive to screen flicker.

The GTX 1060 will happily run two or three monitors, as long as they are set up properly, though it may struggle to run three monitors if one of them is being used for gaming.

Which is the best monitor for you? Comparing 75Hz vs. 144Hz