The ASRock vs MSI motherboard debate is not a new one by any means, and if you ask around, you’ll find lots of people telling you to always go for one brand or the other. 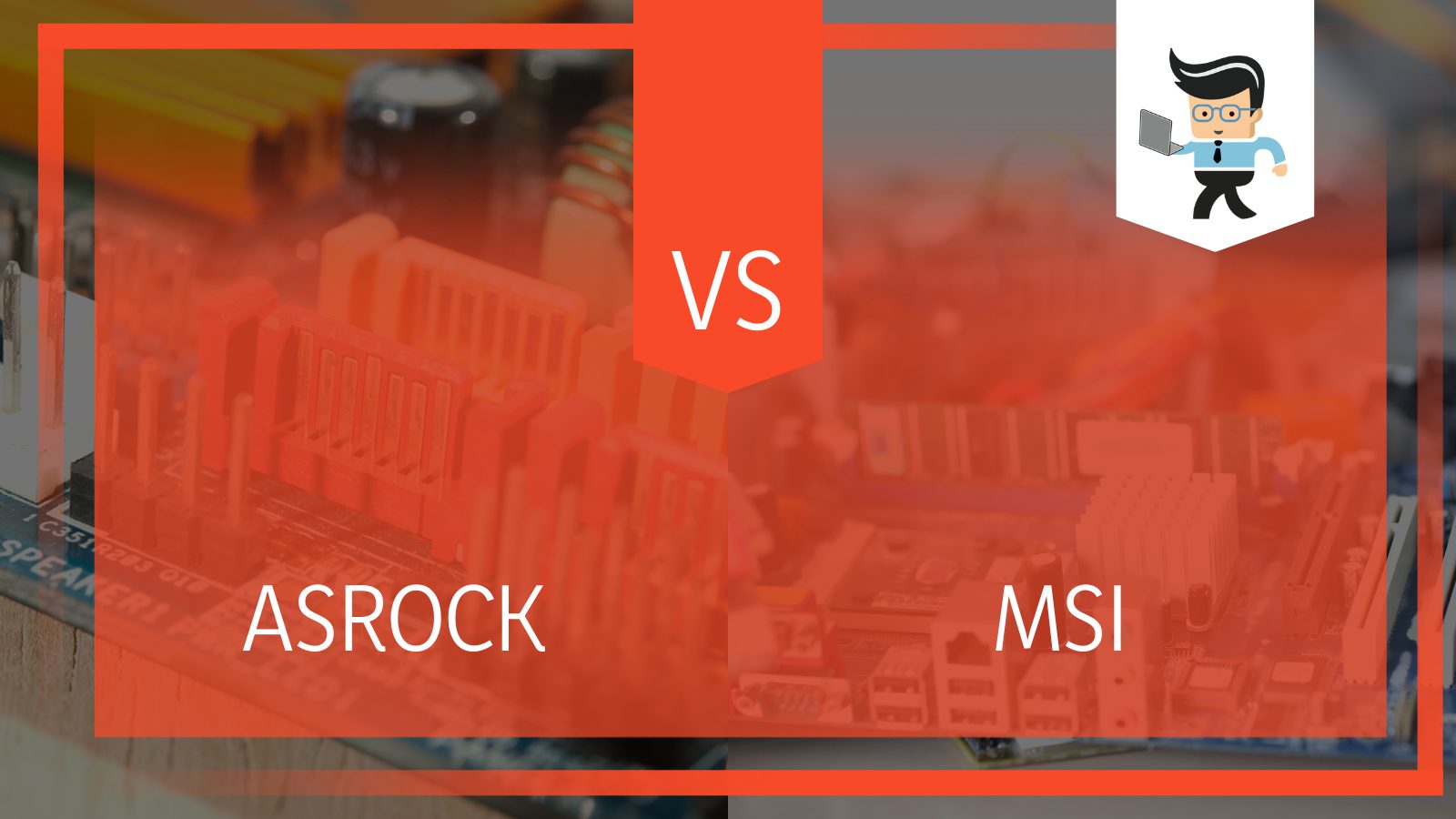 Even though the motherboards manufactured by these two companies are some of the best ones you can find in the market, both of these companies typically focus on different goals while manufacturing their motherboards.

So if you’re building a PC and want to choose the best possible motherboard but can’t choose between ASRock vs MSI variants, you’re in the right place. In this article, we’ll look at different aspects of a quality motherboard and see which one out of ASRock vs MSI can be considered to have the best motherboards and graphics cards.

What Are the Differences Between ASRock vs MSI?

The main difference between ASRock vs MSI is that their motherboards are manufactured with different purposes in mind. ASRock focuses on build quality and long-term usage, while MSI allows you to squeeze every last drop of juice out of your computer to provide you with the best user experience.

There are a lot of factors that can be used to judge whether you should choose an ASRock vs MSI motherboard. Both companies usually focus on different aspects of a motherboard, so we’ll be focusing on some of these aspects to see which one of ASRock vs MSI will be the better one. 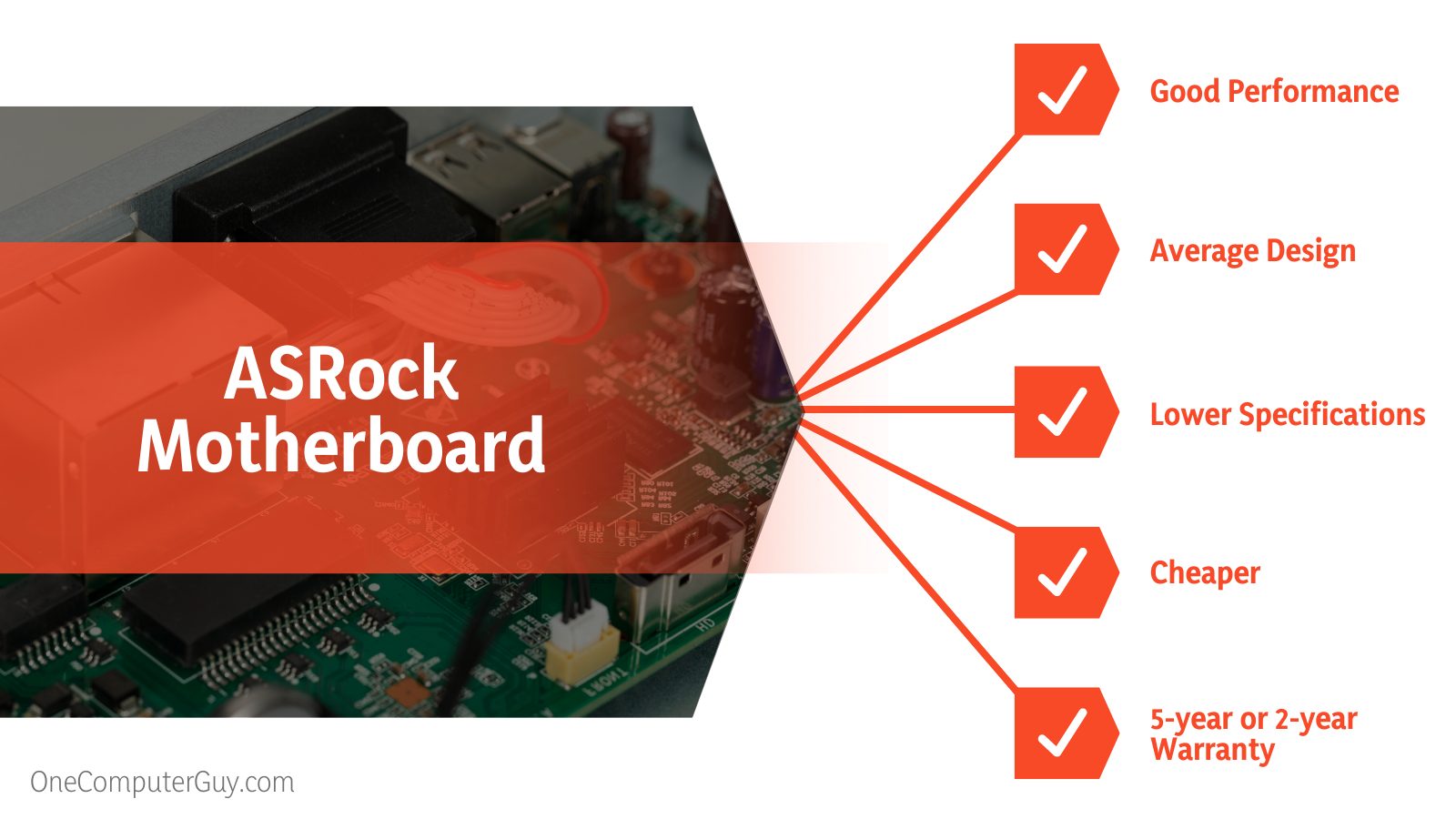 The first, and arguably the most important, aspect of a motherboard is its performance. Suppose you’re looking for a motherboard for your PC. In that case, we’d suggest you seriously consider the performance of your desired motherboard. If your motherboard isn’t up to par performance-wise, your experience using your PC won’t be good at all.

Now, let’s compare ASRock vs MSI GPU motherboards in terms of performance. In terms of performance, MSI motherboards are typically regarded as the superior choice. They provide faster clock speeds and more stability, which might give you an advantage in challenging jobs like competitive gaming, which should be a given since MSI is a major sponsor of PC gaming events.

Apart from performance, there are typically fewer reports of problems like problematic networking or boot failures on MSI motherboards, making them more dependable. However, ASRock motherboards have some distinct benefits of their own, like reduced costs and a better selection of features. So if you wish to choose between ASRock vs MSI graphics cards and motherboards in terms of performance, we’d suggest you go with MSI.

Even though the design of a motherboard has virtually no effect on its capabilities, having an aesthetic design is considered pretty vital in a computer build. Having a high-end motherboard is well and good, but if it isn’t pleasing to look at, you really haven’t made the best choice. So the question here is: which out of ASRock vs MSI has a better design?

Well, the answer to that question is that in terms of design, MSI motherboards often have more features than ASRock motherboards. For instance, MSI boards frequently have reinforced PCIe slots, M.2 support, and onboard RGB lighting.

So at the end of the day, the choice of a particular brand ultimately is a matter of personal preference. If you’re looking for an aesthetically pleasing motherboard to use in your build, you’ll want an MSI motherboard.

Another point that can help you choose the best option is the ASRock vs MSI specifications of the motherboards. Even though most of the specs of a computer depend on other hardware components, your motherboard also determines a few specifications in your build.

The most prominent example of this would be the clock speed of your computer, which is determined by your motherboard’s specs. Other than that, your mobo also determines what sort of processors you can use and can also determine the max level of RAM and GPU that can be used without suffering a throttle.

As a rule, MSI motherboards support more RAM and have faster clock speeds than ASRock motherboards. However, ASRock motherboards are typically less expensive than MSI versions. In the end, the best way to choose between ASRock vs. MSI will be to figure out the rest of your build components and your budget constraints.

You can use different softwares and programs to make the most out of your motherboard, but these programs need to be tailored to each class of motherboard. Software-wise, MSI motherboards often work with a greater variety of applications and gadgets. Additionally, MSI provides more features and customization choices than ASRock.

However, the software from ASRock is typically simpler to use and browse. So the decision of which brand is the better choice ultimately comes down to your needs and preferences.

One of the most defining points in the ASRock vs MSI debate is the pricing of these two companies. As a rule, although there is a wide variety of motherboards available from both manufacturers, prices can vary significantly. 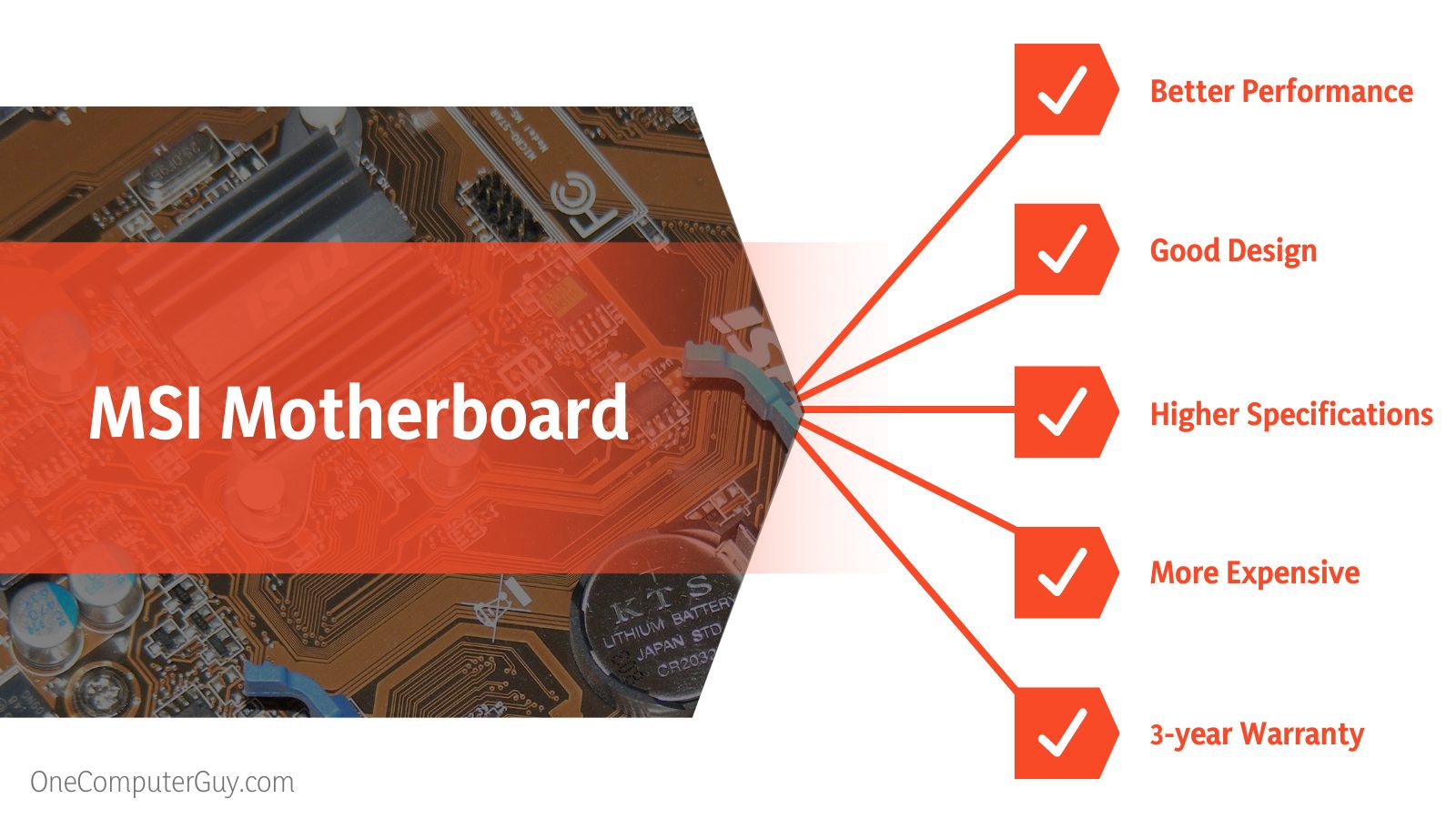 Although MSI motherboards are often more costly when compared to ASRock, they also come with more functionality and better-quality parts. In the end, it all comes down to finances. ASRock is a decent choice if you have a limited budget and need a motherboard. However, if you want the best bang for your buck, then you should go for a mobo manufactured by ASRock.

All of the motherboards manufactured by MSI come with a standard 3-year guarantee. In contrast, ASRock provides an excellent 5-year warranty when buying the more expensive models and a 2-year warranty on its more affordable choices.

Even though you can get the option to upgrade your MSI motherboard’s warranty to a 5-year period, you’ll need to pay an additional fee for that. So if you want the advantage of a longer warranty, you should choose an ASRock mobo.

What is ASRock Best For?

The motherboards manufactured by ASRock is best for those who are looking for good quality while being under the constraints of a budget. If you don’t have the cash to burn, then we’d suggest you choose an ASRock variant for your required motherboard. 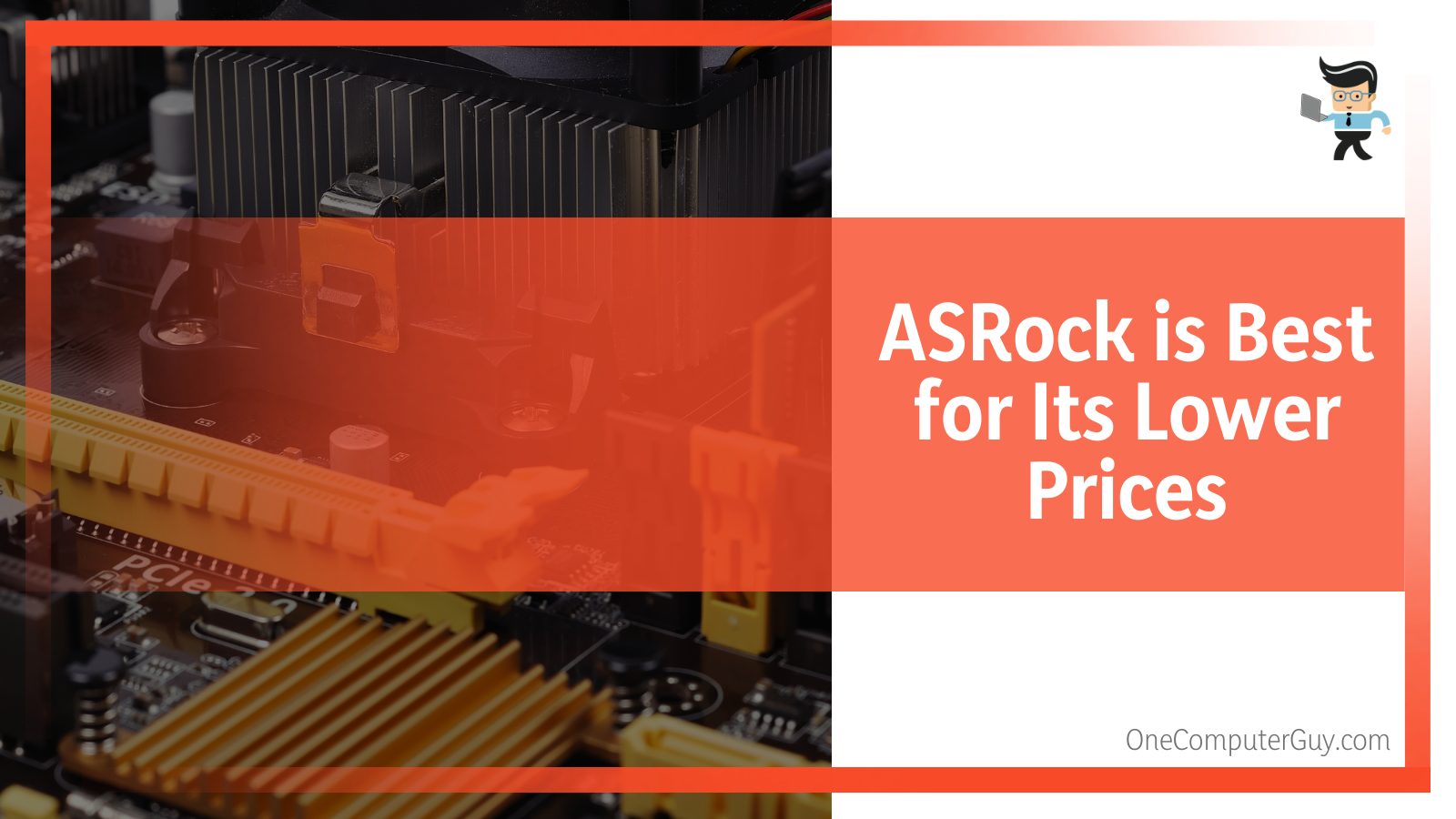 What is MSI Best For?

MSI has made a well-deserved name in the eSports industry and is best for its superior performance, design, specifications, etc. Even though MSI motherboards are more expensive when compared to other alternatives like ASRock, they provide great quality to the user.

ASRock used to be a spin-off of ASUS that was created for the company to compete with other hardware companies; it is owned by a company called Pegatron, and ASUS has no ownership of it. Hence, ASRock vs ASUS quality is not comparable, nor will you find ASRock motherboard in ASUS ROG gaming machines.

– Which Motherboard Company Is Best?

There are several top-quality brands famous for their motherboards: ASRock and MSI are two of the best, along with other brands like Gigabyte, AMD Radeon, EVGA, Biostar, etc.

As far as build quality goes, ASRock motherboards are quite good. However, they lag behind other brands in terms of performance and design capabilities in similar motherboard classes such as ASRock vs Gigabyte. So if you want to play competitive games or AAA titles or just want to do strenuous work on your PC, MSI is going to be your best friend.

In conclusion, we can say that despite being more expensive, the motherboards manufactured by MSI outclass the motherboards made by ASRock by a huge margin. In terms of performance, design, specifications, and software, MSI has a huge advantage over ASRock.

Even though ASRock has a better warranty, a cheaper price point, and great build quality, most people opt to go for an MSI motherboard. However, if you have a limited budget and can’t afford to get an MSI mobo, going for an ASRock one is still a great option.