Choosing between 2666 vs. 3000 RAM can be a little overwhelming especially if you don’t know the right factors to consider. 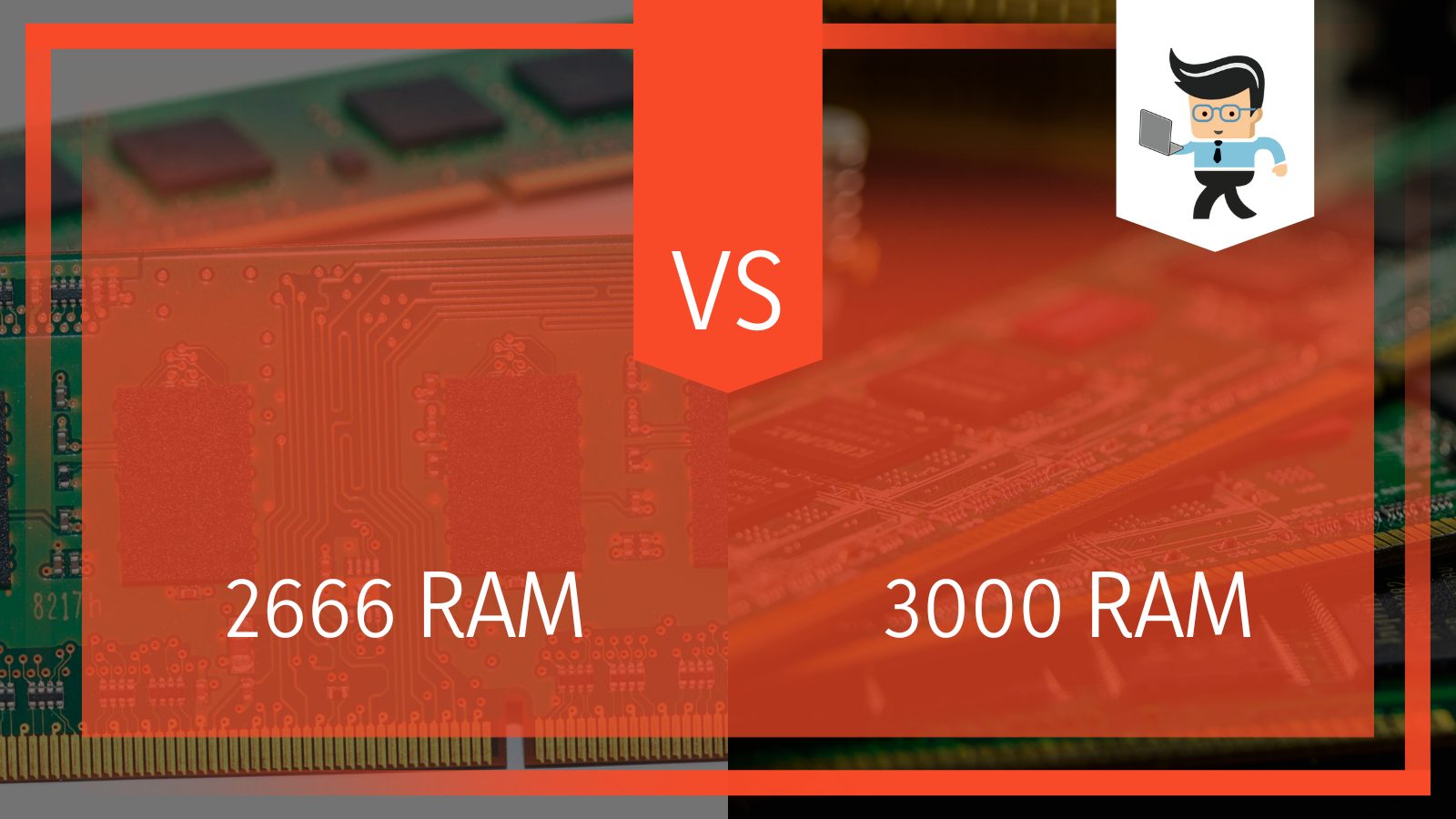 Is there any real difference between both?

In this article, our tech experts will take you on a journey through the world of RAMs. We’ll answer your questions and provide you with enough insights to help you determine whether or not to buy the 2666MHz or 3000MHz RAM.

Let’s Start With the Simple Stuff

Every PC builder should know that the functionalities, capabilities, and speed of a RAM are determined by three main factors: latency, frequency, and size. We’ll be explaining what these factors are as they will help you make an informed decision on the 2666MHz vs. 3000MHz discussion.

The frequency of a RAM is what is popularly known as the clock speed. It’s measured in MHz and usually ranges between 2400MHz to 4400MHz.

The faster the clock speed of your RAM, the faster your computer’s processor will be able to retrieve data on your hard drive, SSD, or any other storage device you use. This is the reason why you notice an increase in performance in games and other real-world scenarios when you get better RAM.

The Megahertz or MHz tied to a RAM indicates the number of times the RAM can access its memory per second. As you may have guessed, RAMs with high MHZ ratings will be faster than those with lower ratings. However, there are some caveats but we’ll get to that later.

The latency of a RAM, otherwise known as CAS latency or Column Address Strobe latency is a factor that’s often overlooked when considering the speed of a RAM.

CAS latency refers to how long it takes a RAM to recognize an action or command it’s been given. It can be likened to the kind of latency you experience when you give a command through your mouse and the time it takes for your monitor to provide visual output.

CAS latency is often recorded with four numbers in this format: 14-14-18-32. These numbers represent the number of clock cycles a RAM needs in order to register a command. The first number from the string of numbers is what’s used to determine the CAS latency of a RAM. Generally, the lower the number, the better and faster your RAM will be.

The size of a RAM is the overall memory capacity embedded into the RAM. 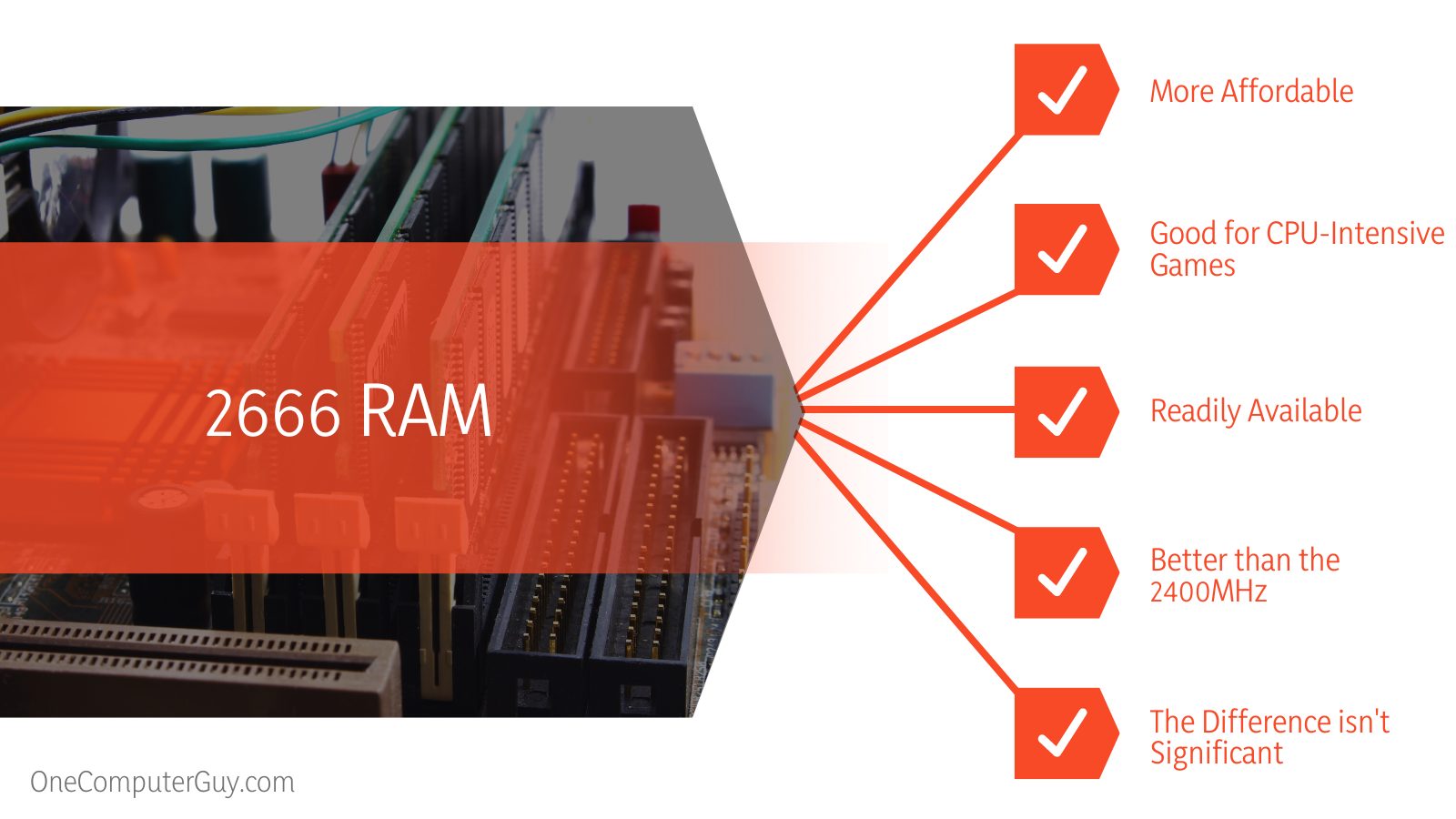 You’re likely familiar with RAM sizes, such as 4GB, 8GB, 16GB, and 32GB. Additional RAM capacities allow your computer to run more efficiently. Your PC will be able to load programs faster and multitasking will be a lot smoother.

The reason why RAMs are able to improve the performance of a computer is that while their sizes are smaller than other storage devices, RAMs are faster than SSDs and HDDs.

When you boot your computer, your storage device takes time to load up the data that has been stored in it. Once it’s done loading your files, it allows your RAM to have access to the files, games, software, and other components stored on it. This relationship between your storage device and RAM makes it easy for your RAM to randomly access anything you want from the storage device, hence the name Random Access Memory.

So the bigger the capacity of your RAM, the faster it’ll be able to access the components stored on your drive. Look at it this way: your storage device (HDD, SSD, etc.) are your drawers, cabinets, and shelves while your RAM represents your desk.

Your desk allows you quick access to work files and other things you may need. You’ll need to stand up and rummage through your cabinets and shelves to get what you’ve stored in them, thereby taking more time. But if you have those files available on your desk, you’ll be able to get down to business immediately.

Which Matters Most? Size, Latency, or Clock Speed?

Out of all the factors we’ve discussed above, size is the number one factor you should consider when buying RAM.

If you’re looking to use your PC for personal or office use such as checking your emails, using Microsoft office, and Netflix, 8GB of RAM is a good spot to stay. For gamers, graphic designs, video producers, rendering, etc. 16GB of RAM should be your starting point.

Yes, it matters, but not as much as most people think. For instance, you can use 16GB 2666MHz DDR4 RAM to build an excellent gaming rig. While it won’t be as fast as what you’d get with 16GB 3200MHz DDR4 RAM, most people won’t notice the difference.

If you’re building a PC for personal or basic business use, or you’re on a budget, you can use a RAM stick with lower clock speeds. It’ll save you money and will power your apps just fine.

However, if you’ll be doing graphic-intensive tasks, like playing HD games, video editing, rendering, etc., you may need to choose RAMs with higher clock speeds. We’ve done a RAM comparison below to help you understand the differences between different clock speeds.

Now, What About Latency?

Latency is similar to clock speed in terms of considerations. While it’s an important factor, it’s not a huge deciding factor when considering the ideal RAM for a PC build. Like we noted earlier, the lower the CL, the better the RAM. However, you can get a decent performance from a RAM with high CL if the other parameters are okay.

This means that even if a RAM has a high latency like CL18, as long as the RAM size and clock speed are around 16GB and 3200MHz respectively, you’ll still get decent performance.

Now, this doesn’t mean you shouldn’t buy a RAM with CL14 or CL12. As long as the specs are decent, they’ll provide you with better performance than a CL18. If you’re on a budget or looking to build an everyday use computer, then you may not consider latency as much. But if you want the absolute best, you’re building a sophisticated gaming system, or you engage in production work, getting a RAM with lower latency is worth it.

Note that low latency RAMs are about 30 percent pricier than sticks with high latency. So, except you’re building a sophisticated rig, it’s recommended that you buy a stick with excellent specs and decent latency if you can’t afford those with low latency.

Understanding the Difference Between 2666 and 3000 RAM 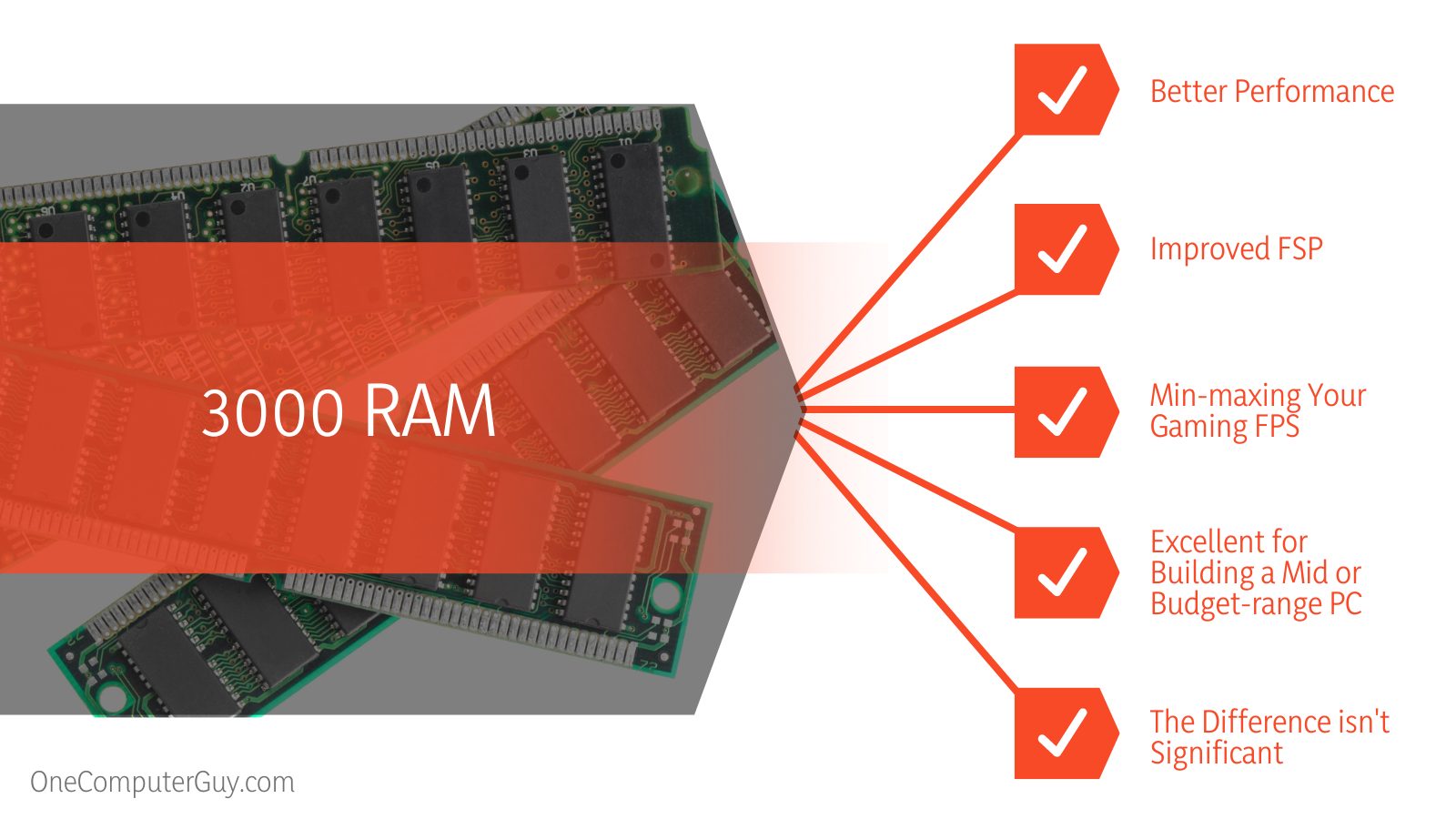 Manufacturers tend to make RAMs available in different sizes, CL latency, and MHz. These options can make it difficult for you to choose the ideal RAM. A good example is choosing between a 16GB DDR4 2666MHz RAM vs. an 8GB DDR4 3000 RAM.

That is why we are creating a DDR4 RAM speed comparison chart below to make sure you know what RAM to choose for your rig. Keep in mind that our comparison chart is assuming latency, speed, and capacity the RAMs are the same.

A DDR4 2666MHz RAM will be a little better than the 2400MHz, especially if you’re pairing it with an AMD build. For gamers, you’re likely to experience a small increase in frame rates if you’re playing CPU-intensive games. However, we’d recommend that you only switch to 2666MHz if the cost is close to the price of the 2400MHz.

While the speed difference between these two won’t be huge, the changes will be more noticeable than when you switch to 2666MHz. As long as the 3000MHz you want to buy has a good CL rating and capacity, you’re bound to notice about a 10 percent increase in performance.

Manufacturers love making the 3200MHz. This RAM is great for mid-range CPU motherboards, especially when combined with a great CL rating. While the 2400MHz is okay for budget builds, we’d recommend that you opt for the 3200MHz if you can afford it.

The 3600MHz is a RAM that’s ideal for high-end CPUs. It won’t bottleneck your CPU’s performance, allowing you to have smoother processes. However, if you’re on a tight budget, the 2400MHz will do. You just need to make sure the RAM size is 16GB and above.

As you may have guessed, there’s no noticeable difference between the 2666MHz and 2667MHz. If you’re considering buying one of these two, put your money on the cheaper one as long as they have the same capacity and latency.

If you play CPU-intensive games, you may notice some FPS improvements in a handful of games when you swap the 2666MHz for the 2933MHz. But for the most part, the differences between both won’t be significant. The 2933MHz isn’t as readily available as the 2666MHz, so we’d recommend that you work with the 2666MHz if you’re on a budget or choose the 3000MHz if you’re looking to go higher.

Just as with the 2933MHz, the difference between 2666MHz and 3000MHz RAM isn’t much. Our opinion here is that you should only choose the 3000 DDR4 RAM if you’re concerned about min-maxing your gaming FPS or if the price difference between both isn’t high. For gamers looking to min-max FPS, we suggest you look towards higher speeds if you can afford them.

The difference between 2666 and 3200 RAM is noticeable. You’re sure to notice an increase in speed when you swap the 2666MHz for the 3200MHz. Some CPU-intensive games may even gain extra FPS. And if you use a high-end AMD Ryzen chip, you may notice some improvements in some runtime processes.

While you’ll notice a slight increase when you use the 3200MHz, the speed difference won’t provide more than a couple of FPS in CPU-intensive games. As long as the specs are equal, we suggest that you stick to whichever is cheaper.

While 3000MHz RAMs tend to be about 10 percent cheaper than the 3600MHz, the latter offers about a 20 percent increase in speed.

If you’re building your rig with a high-end CPU, especially if it’s an AMD chip, we suggest you move towards the 3600MHz. The reason is that high-end CPUs tend to be bottlenecked by lower frequencies when running some operations. However, most people will be fine with the 3000MHz.

There’s obviously going to be a significant increase in performance when you use a 4000MHz stick with excellent specs.

But is the price difference worth it?

If you’ll be using it for intensive editing, rendering, and high-end production, then yes, it’s worth it.

For gaming, the 4000MHz offers about a five percent increase in FPS over the 3000MHz. While this is a nice improvement, buying the 4000MHz just for an FPS increase may not be worth it. If you’re building a mid or budget-range PC, the 3000MHz RAM with excellent latency and capacity is a great choice.

The 4400MHz comes with nearly 50 percent extra frequency, allowing it to provide a noticeable edge over the 3000MHz. For gamers, you can expect at least a five percent increase in performance for many game titles. But where the 4400MHz really shines is in other processes like rendering and video editing. 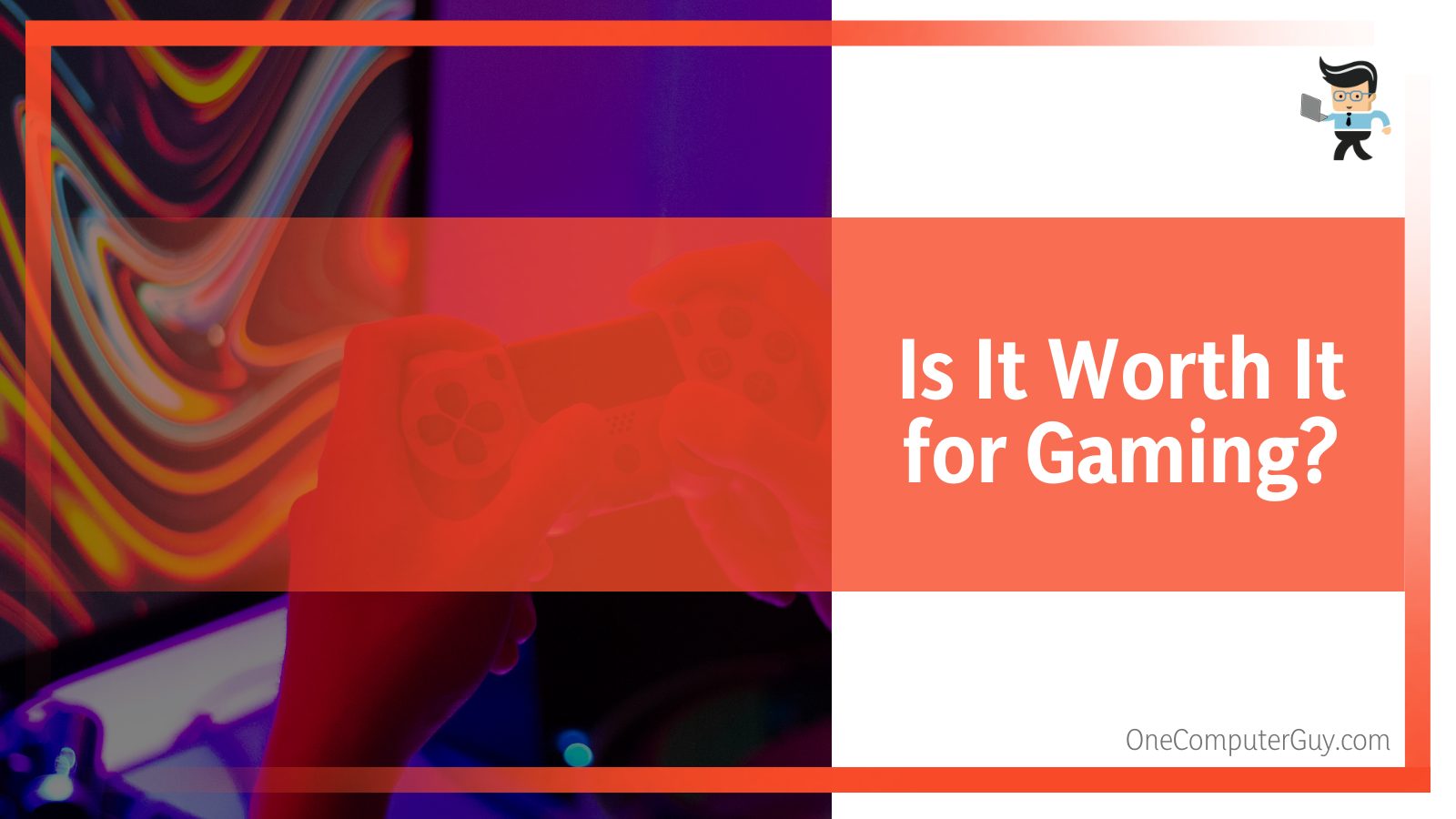 However, the real question here is is it worth it for gaming?

Yes, it is, but that’s only if you’re building a gaming rig with a high-end processor. The 4400MHz is overkill for budget and mid-range builds. We suggest you choose the 4000 or even the 3600MHz if you’re looking to get the same results on a mid-range or budget build.

We’ve covered a lot of concerns about the 2666 vs 3000 RAM debate. Here are some key notes to keep in mind when considering either of these RAM sticks: