A 900p vs 1080p comparison will typically prove that the latter is the better display resolution. And while 1080p seems to be the option that everyone chooses, in some cases you don’t need to spend the extra money since 900p can fulfill your needs. 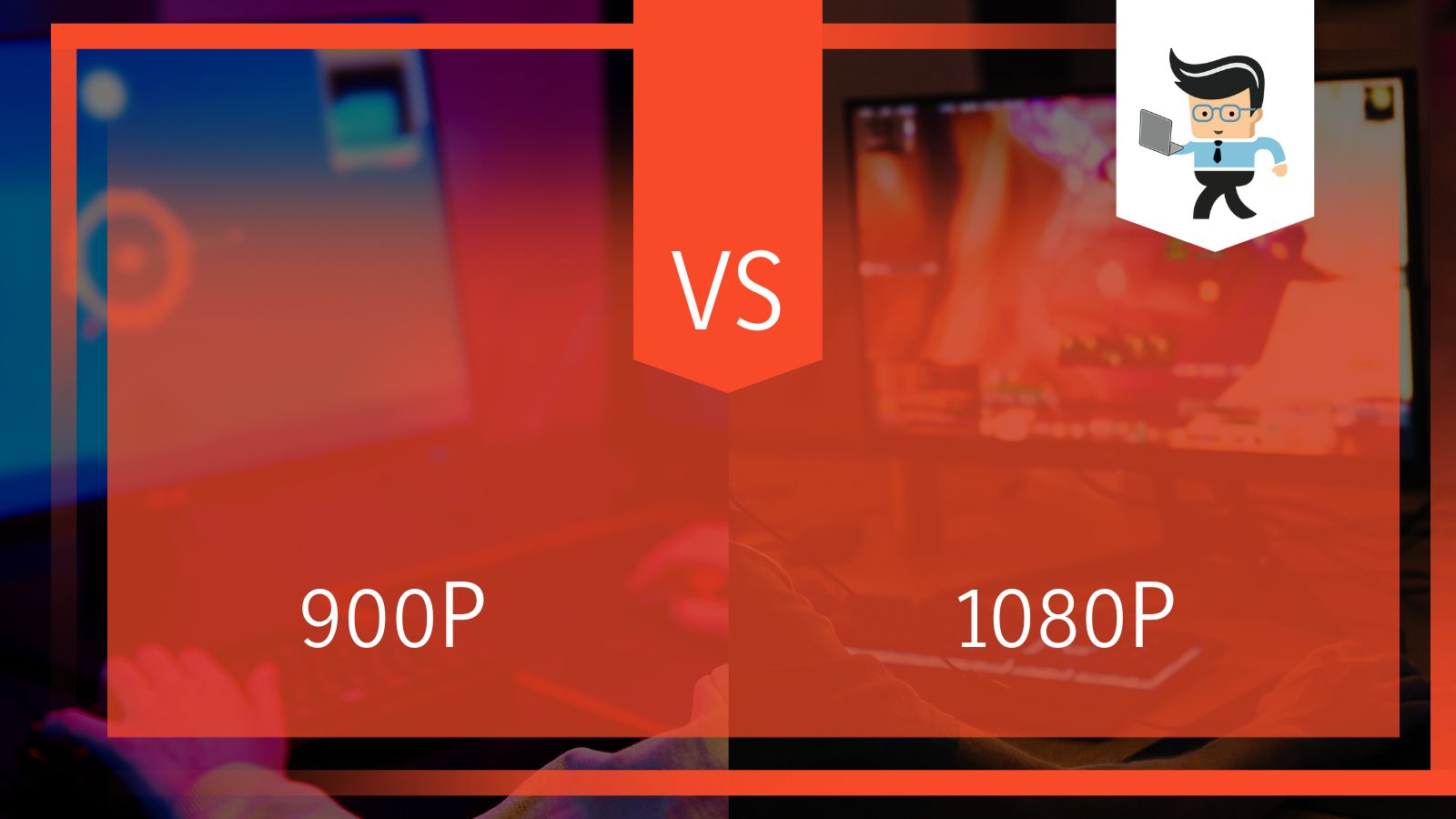 If you’re confused about how these two resolutions compare, you don’t need to worry. In this complete guide, we discuss the differences between the two and which one is the better option, keeping your use of the monitor in mind.

The main difference between 900p and 1080p is that 1080p has roughly 30 percent more pixels than 900p, so you get a clearer picture. This means that the picture quality of 900p is lower, but it’s comparatively easier on your PC’s hardware and is cheaper than 1080p displays.

Choosing a monitor is a very simple and easy task if you’re just going to be using it for school or regular everyday tasks. Documents, emails, spreadsheets, and similar files will look nearly the same whether you view them on 1080p or 900p.

In fact, even if you go higher than that, like 4K, the documents will still look the same. So in this case, the resolution doesn’t really monitor – both 900p and 1080p monitors having the same aspect ratio are equally good.

Whether you should go for a 900p screen or a 1080p screen for gaming comes down to two factors: whether you’ll be playing on a computer or a console, and in the case of the former, how powerful of a rig you have built.

However, if you have an old rig or one that’s made on a budget, it’s better to consider the games you will be playing before purchasing a display.

Slow-paced games such as Stellaris, the Final Fantasy VII remake, or Civilization can be played at a slow frame rate, but if you’ll be playing something like COD or Street Fighter V, you’ll want the maximum FPS. In this case, it’s better to compromise on the resolution.

In short, playing on 900p Ultra vs 1080p Medium depends on the game you’re playing as well as your personal preference. In most cases, 1080p is better, since it makes details much clearer and easier to spot. 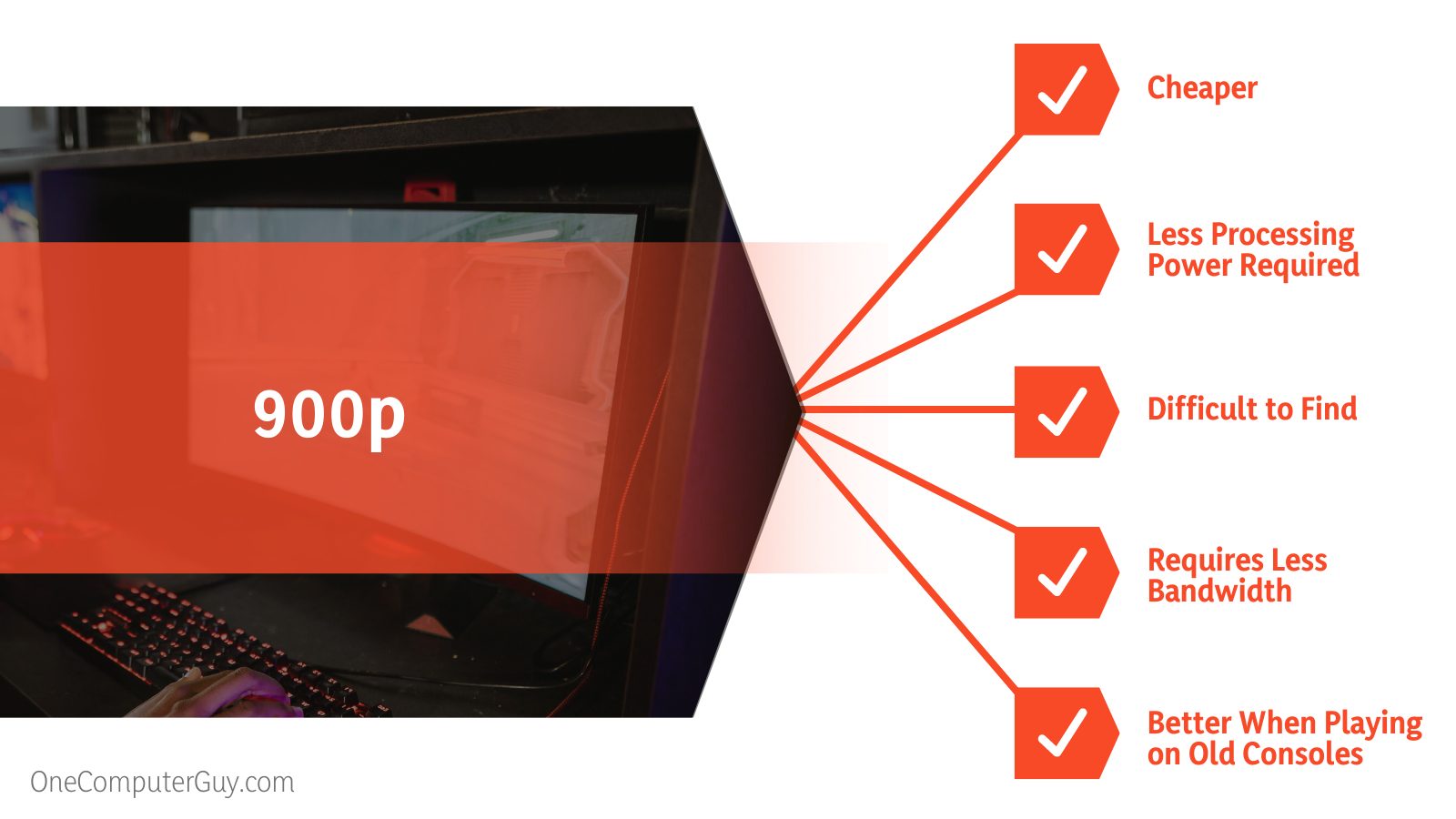 Both the Xbox Series X and PlayStation 5 can output video in 1080p, and if you have either of the two, you should go for a 1080p screen instead of a 900p screen with the same aspect ratio.

While most consoles are compatible with a 900p screen, newer ones will have to downscale the output in order to fit the screen. However, it’s much easier to get your hands on a 1080p monitor that can support high frame rates instead of a 900p display. At the same time, a higher FPS can make your gaming experience more fluid and fast.

You should keep in mind that with 900p gaming on 1080p monitors, you might have to sacrifice screen clarity a little. Meanwhile, previous-gen consoles work equally well on a 900p display.

Even though the Xbox One and PlayStation 4 can render games in 1080p, they don’t have the components that are powerful enough for maintaining a steady frame rate at the resolution during action-packed, intense scenes with many characters on the screen. In fact, to maintain a steady frame rate, previous-gen consoles used to automatically downscale from 1080p to 900p as soon as the game became taxing.

It’s no secret that 1080p displays produce images that are roughly 30 percent clearer than the images produced by a 900p display of the same size. As a result, the images are more detailed, and you get a more cinematic viewing experience.

Another advantage of choosing 1080p for multimedia purposes is that you get a wide content library that’s specifically designed for the higher resolution.

On the other hand, despite being the halfway point between 1080p and 720p, 900p never really became the industry standard for content producers or monitor and TV manufacturers. Most YouTube videos, shows, and movies are made to be watched in 4K, 1080p, or 720p, but not in 900p.

Of course, with video scaling, you can play shows and movies on your 900p display, but you might get a slightly blurry or out-of-focus picture. You might also notice some visual artifacts, depending on the display’s video scaler and the original resolution of the content.

The bottom line is that while a 1080p display is the better option, you can still get a decent viewing experience with 900p.

While you might be tempted to live-stream your game in 1080p resolution or higher, it’s better if you don’t, and there’s a reason for that. For instance, let’s consider live-streaming on Twitch. By default, the bitrate is capped at 6000kbps on the stream (unless you’re an established partner). In addition to that, it doesn’t provide transcoding options.

All of this limits the amount of data you can send and often doesn’t allow your viewers to change the stream’s resolution. While 6000kbps sounds like a lot, it actually isn’t enough for streaming a game in 1080p at 60fps, so your smooth gameplay will most likely appear as a low-FPS scenario for all your viewers.

Plus, since you won’t have transcoding options, it will be impossible for your viewers to adjust the resolution. This means that followers with a subpar internet connection won’t be able to watch your videos at all. This is also why Twitch recommends that you stream your content at 900p or lower.

When it comes to 900p vs 720p Twitch streaming settings, the answer comes down to your frame rate and the bitrate you get from Twitch. At 6000kbps, you can stream at 900p at 60fps, but if you have less than that, it’s better to opt for 720p. 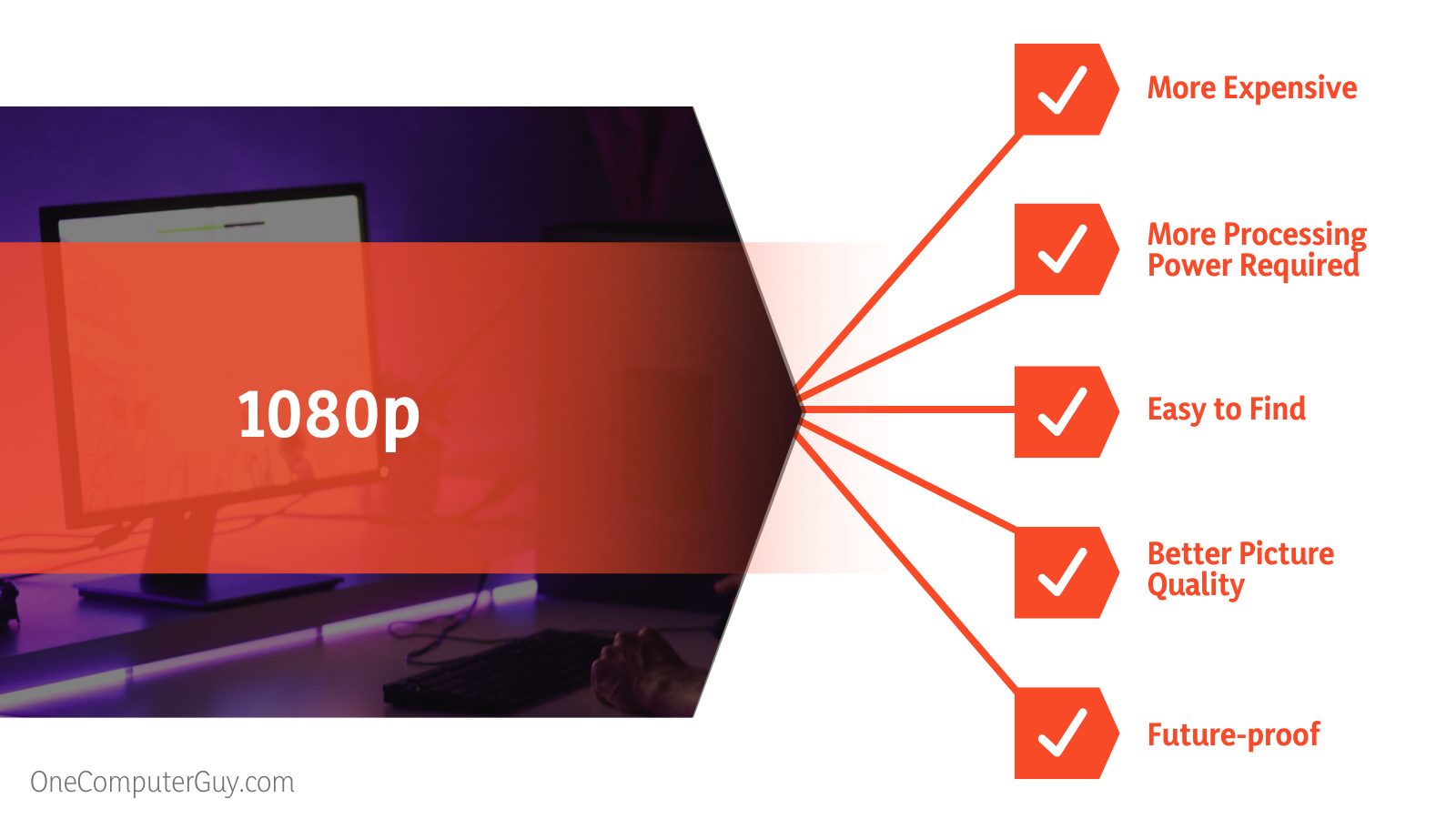 The display resolution is basically the number of pixels that can be displayed on a screen at once. Screens like OLED, LCD, and plasma displays are known as fixed-pixel-array screens, and they’re made of physical columns and rows of pixels.

The number of pixels is used to determine the screen’s resolution. So 1080 means that the screen can display 1080 rows of pixels together. But that’s not the complete picture; you also need to understand the screen’s aspect ratio and the pixel density.

Aspect ratio is basically a measure of the screen’s width in comparison to the height. Wide-screen displays typically have an aspect ratio of 16:9 (with some exceptions), which means they’re almost 1.777 times wider than their height.

This is important to understand since it can put into perspective how much better 1080p is. So with 1080 rows of pixels, and there being 1.777 times more columns as rows, this means that there are 1920 columns of pixels on the screen. And once you multiply the number of rows and columns together, you get a total of 2,073,600 pixels.

What does all of this mean? It means that the picture you see on your 1080p comprises more than 2 million tiny pixels turning off and on to change colors numerous times in one second. This is why all the details you see are nice and crisp.

The same math can be applied to all resolutions with the same aspect ratio. So if we do the math for 900p resolution and multiply 900 rows of pixels by 1600 columns, the total 900p pixels we get is 1,440,000. This is 30 percent fewer pixels than 1080p, but that doesn’t necessarily mean that 1080p is 30 percent better. For that, you need to understand the pixel density.

However, there comes a time when the pixel density crosses a specific threshold, and the law of diminishing return kicks into place. However, a higher pixel density generally means a much better viewing experience as compared to a bigger screen that has the same resolution. This is why the picture appears to be much clearer on a smaller full HD monitor as compared to a flat-screen full HD screen.

With all of that out of the way, the question remains: is 1080p better than 900p? The differences between the two and how the two compare can be better understood by taking a look at their different uses.

900p is the best option if you want to live-stream your gaming session, perform day-to-day computer games, or play games on older consoles. This display resolution requires less bandwidth and processing power and such displays are often cheaper than 1080p screens, albeit a little harder to find. 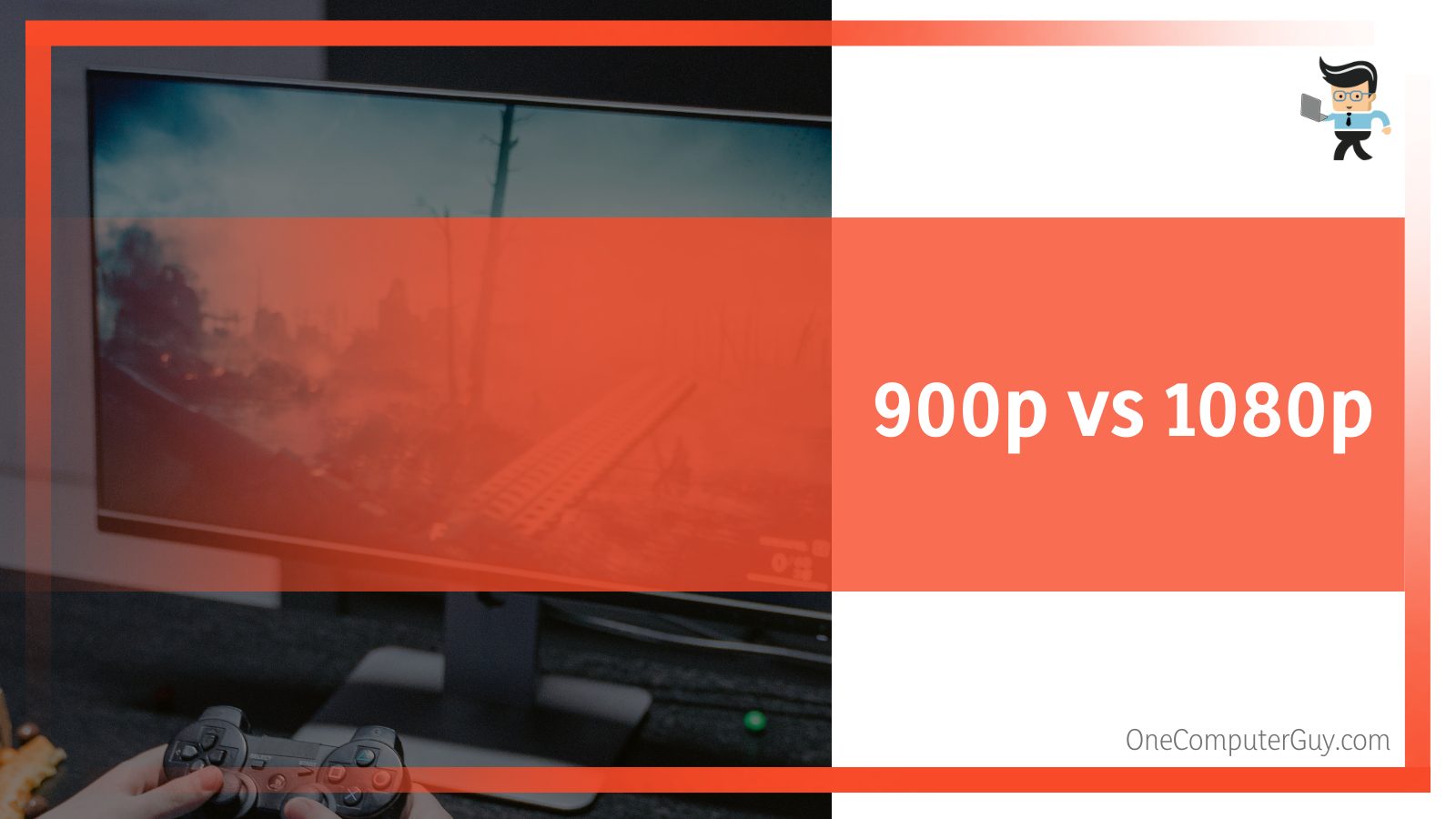 1080p is best for those who are looking for better picture quality than any other resolutions in the market. So if that is the most important factor for you, this is the way to go. Plus, 1080p is future-proof, and you can easily find lots of content. You can also find 1080p TVs and monitors easily.

If you have a new console like the PS5 that renders videos at 1080p automatically, you’re better off investing in a 1080p display. However, keep in mind that it’s going to be more expensive and if budget is a factor, then 900p is also a good option, especially since the drop-off isn’t too apparent.

After reading this 900p vs 1080p review, you now know the differences between the two resolutions. Except for streaming and when playing on old consoles, 1080p is the better option, and displays with this resolution are easier to find. But if you’re on a budget, you can opt for 900p, too, especially since there’s not a lot of difference in the picture quality between 900 and 1080p.