8GB RAM vs 12GB is an important comparison to make since the amount of RAM you have plays a big role in how well or how poor your computer, tablet, or mobile phone performs, and helps to improve both storage speed and processing. 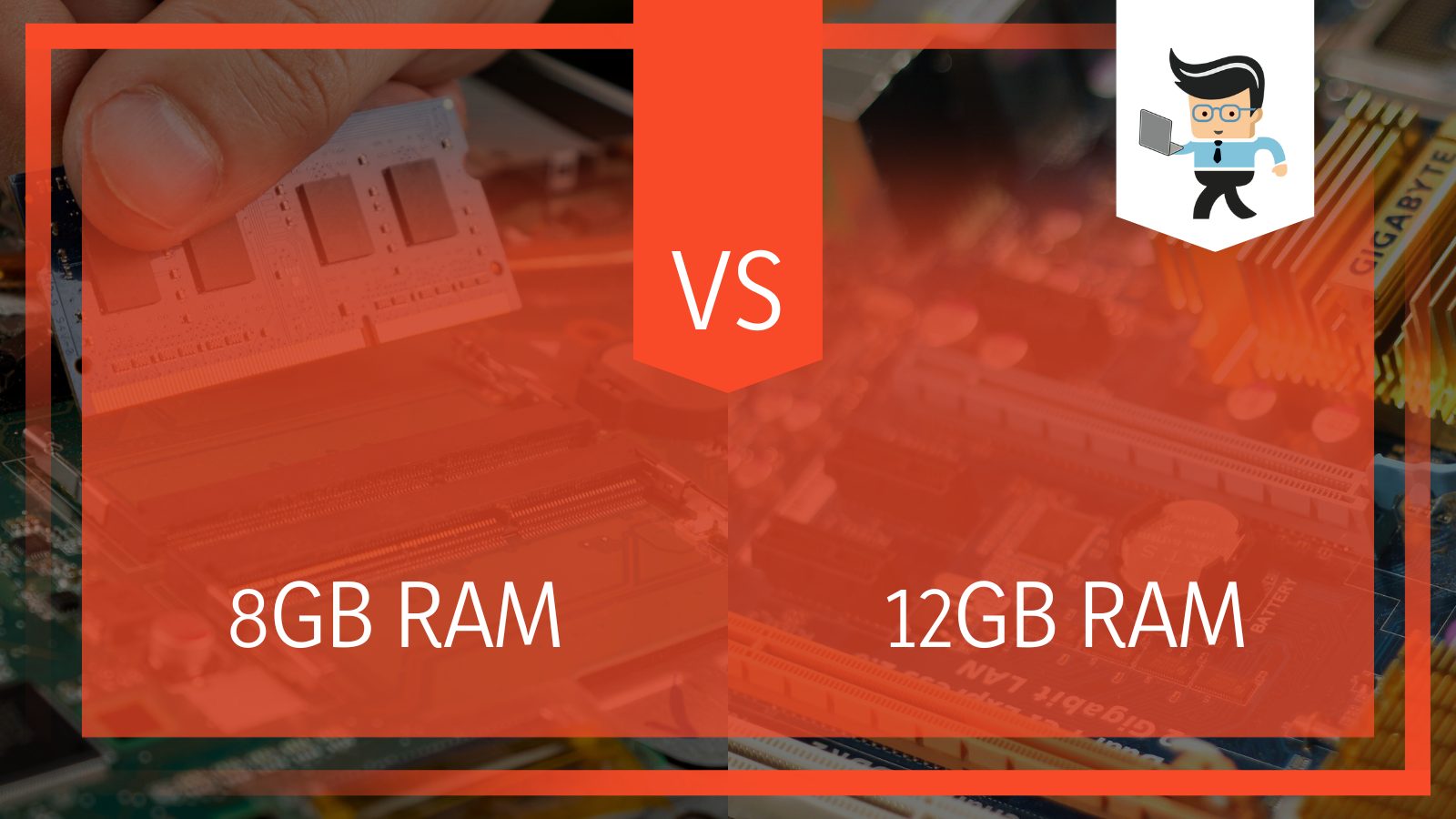 However, that doesn’t mean that you can get more benefits by getting additional RAM – getting more than what you need will only cost time and money.

So when it comes to a 12GB RAM vs 8GB RAM laptop, which one should you choose? In this comparative guide, we’ll compare the two amounts to better understand the purposes of each.

What Are the Differences Between 8GB RAM vs 12GB?

The main difference between 8GB and 12GB of RAM is that 12GB provides faster speed and allows better multitasking on both computers and mobiles, while 8GB is suitable for things like browsing, multimedia, and documentation. You need 12GB for heavy-duty tasks like 3D modeling and editing videos.

Now that you know their main differences, let’s discuss a few different purposes to better understand whether you need 8GB or 12GB of RAM.

If you’re looking for a PC for day-to-day tasks like audits, accounts management, data handling, and inventory management, 8GB is more than enough. It is also enough if your office mostly uses spreadsheets and data management software.

However, for ERP programs and certain corporate software applications like iDempiere and Oracle, 12GB is a better option if you don’t want to encounter any issues.

If you just want something for your classes and assignments, 8GB is more than enough unless you’ll be running some resource-intensive software. Online meetings and classes are usually conducted on Google Meet, Zoom, or some other similar light software.

Similarly, teachers use platforms such as Google Classroom for assignments and to keep track of students. Since these platforms are all cloud-based (they run over the internet), they don’t need a lot of RAM to work smoothly.

However, if you’re doing something like editing videos or studying design or filmmaking, you’ll need something more than 12GB. Such courses involve a lot of practical work and you’ll have to install some heavy software to practice and even complete your assignments. 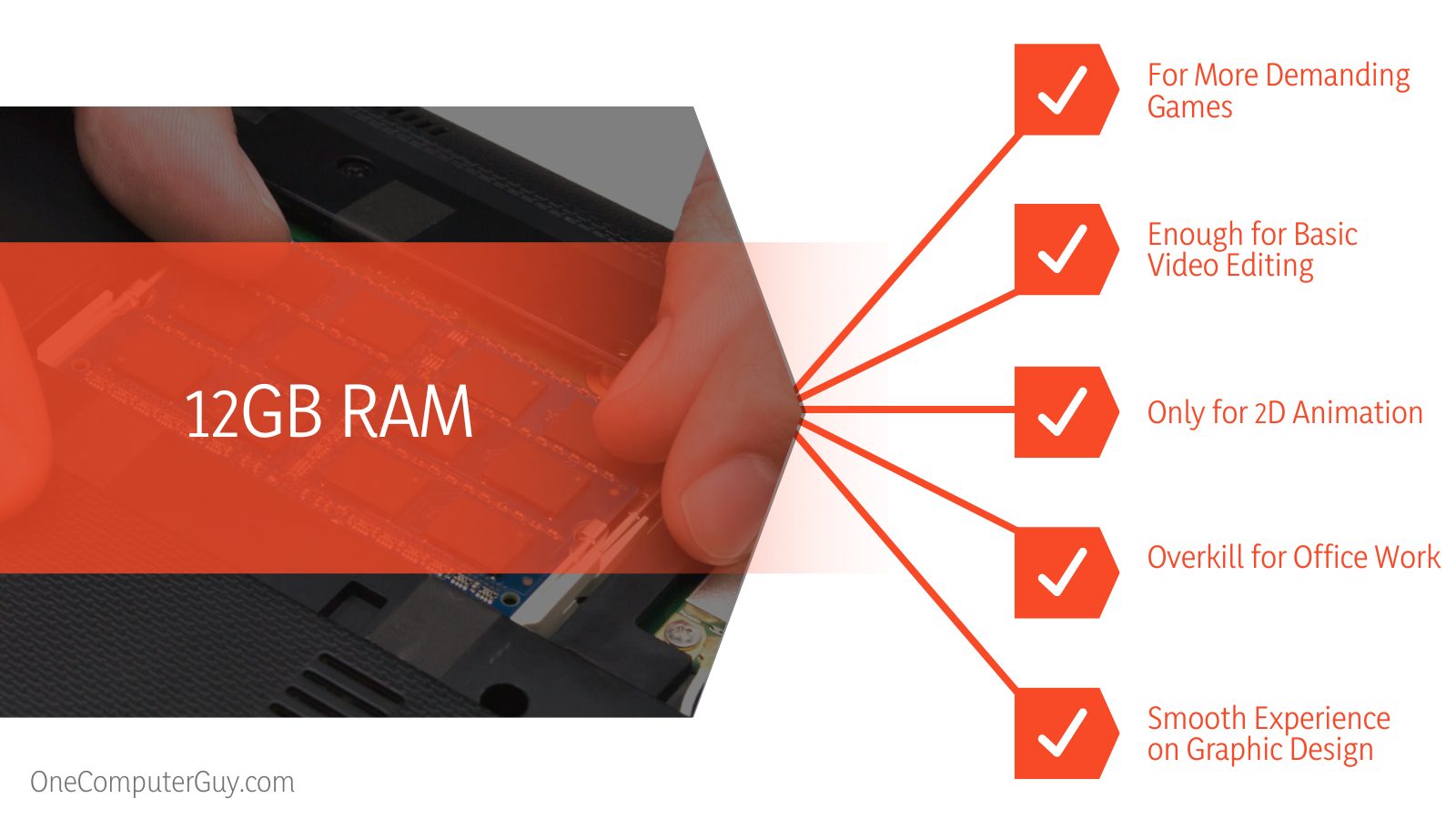 When it comes to 8GB RAM vs 12GB RAM, gaming is important to discuss. In most cases, 8GB is good enough for gaming but if you’re a seasonal player and like to play games in your free time, 12GB is the better option. With it, the game will run smoothly without causing any problems. Plus, your device won’t lag since there’ll be enough free space to allow it to function smoothly.

Some of the most famous titles available today can be played with 12GB of RAM. These include “Battlefield 1-5,” “Overwatch,” “Fallout 5,” “GTA 5,” “CS:GO,” etc. This amount of RAM is also enough if you want to create gaming streams. Since your computer will be functioning smoothly, you’ll be able to record both your video and your voice smoothly.

However, you will need more than 12 GB of RAM for some heavy-duty games, especially if you’re an avid gamer and love to play different titles randomly.

RAM is very important for the different software programs that designers use to complete their work. While there are many programs available for graphic designing, some of the best applications available today will work perfectly if you have 12GB of RAM. Examples of such programs include Adobe XD, Adobe Illustrator, and Adobe Photoshop.

Of course, these programs will run on 8GB of RAM too, since that is what they generally require. However, with 12GB, you’ll be able to get a smooth, lag-free experience, allowing you to get done with your work faster.

When it comes to editing videos, the right amount of RAM that you need depends on the kind of editing. For instance, if you only want to do basic editing just for casual purposes, then 12GB should be enough. In fact, with this amount of RAM, your computer will be able to run some of the more average programs for editing videos available today like CyberLink Power Director and Filmora without any lag.

However, if you want to run something more powerful and high-end to make high-quality videos, such as Adobe After Effects and Adobe Premiere Pro, you need something more powerful than 12GB. Without sufficient RAM, your PC will start to cause problems even if you just install them (and not use them). This is because they occupy a lot of space on your PC.

Similarly, if you’re a professional moviemaker or a cinematographer, 12GB is completely out of the question. Your PC won’t be able to run professional video or picture editing software. To make them work, you’ll have to add more RAM. 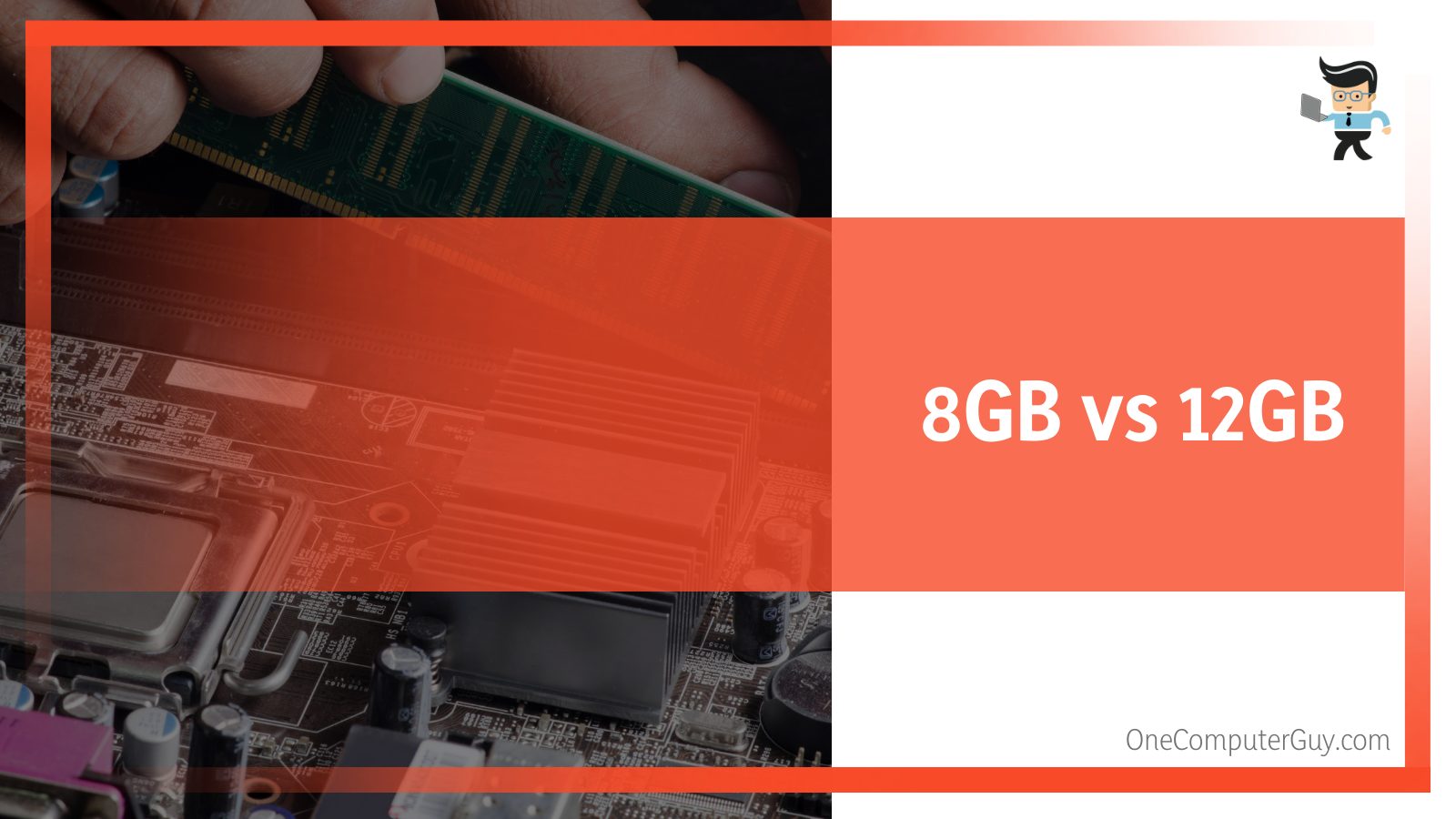 Generally, you need more than 12GB of RAM along with additional graphics features for most animation software. For instance, programs like Cartoon Animator, Moho Pro, and Adobe Maya can’t run on computers with 8GB of RAM.

Similarly, 8GB isn’t enough if you want to run 3D modeling software since you need a significant amount of space for these programs to run. You’ll also experience lagging and other problems when trying to run high-quality interior design software if you don’t have enough RAM (16GB or more).

But if you want to create simple 2D animations or typographies, then 12GB would be enough. However, you’ll have to deal with lag issues and your computer might not perform too well.

Both 8 and 12GB of RAM is more than enough if all you want to do is read Kindle books, use social media, follow blogs, and surf the web. You won’t encounter any difficulties with this kind of RAM. It will take all the commands quickly and perform at a lightning-fast pace so you won’t have any problems.

Similarly, 12GB is also enough if you just want to work with data over the internet. With that much RAM, you’ll be able to use cloud storage without a problem. This is also enough even if you have some programming-related work to do. Since most data is stored over the internet, you don’t need any extra RAM so that your computer works faster.

However, it’s better if you use SSDs instead of adding more RAM since most of your data will be stored on the hard drive and in the cloud. By doing so, you’ll have more space to add more data to the computer.

If you have a laptop or computer just for watching movies, playing random games, and reading books, 8GB is good enough for you. You also won’t have any problems when streaming live videos on social media and it’s also good enough for VR entertainment like songs, animations, 3D movies, etc. Regardless of the channel and the entertainment source, you won’t need more than 8GB.

Keeping this in mind, both 8GB and 12GB are only good if you won’t be putting your phone under an extremely heavy load. For instance, they’re more than enough for day-to-day use. However, for high-end games and applications, you need something that offers more RAM.

In particular, if you want to play VR games on your phone, you’ll benefit more from a phone that offers more than 12GB since it will ensure that everything runs smoothly. Of course, the games will work on both 8GB and 12GB of RAM, but you’ll have a laggy experience with that. Similarly, people who want to stream their gameplay from their mobile phone should go for a device that offers more than 12GB.

What Is 8GB of RAM Best For?

8GB of RAM is best for slightly demanding tasks like graphic design and editing videos (but not for cinematography). It’s also enough to run some less-demanding games. As we can see, there are a number of cases where 8GB is more than enough for you. 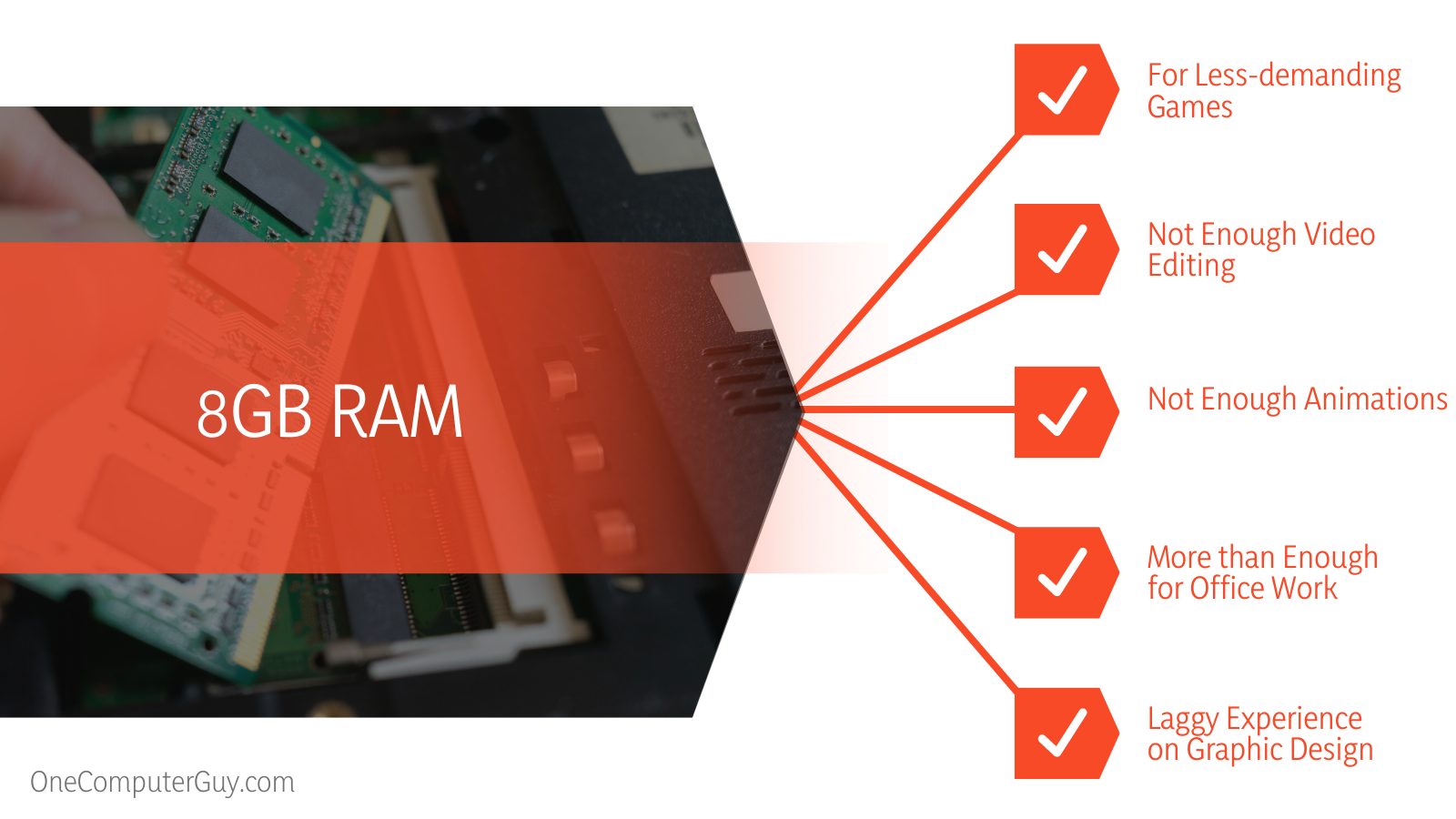 12GB of RAM is best for multitasking or running a couple of heavy programs simultaneously. It’s also enough for playing some of the more demanding titles available today. Tasks like 3D modeling and animation will also work well with this amount of RAM.

Yes; as an average user, 12GB should be good enough for you unless you want to do some heavy and resource-intensive data processing.

As you’ve seen in this 8GB RAM vs 12GB review, you need a different amount of RAM for different tasks. With 12GB, you get better speeds and the ability to multi-task but you don’t always need to spend extra money on memory that you don’t need.

For instance, if you’re going to be doing basic (internet surfing, studying, streaming shows, etc.) or slightly demanding tasks like editing basic videos, playing less demanding games, or just 2D animation, 8GB is enough for you. But you’ll need to upgrade to 12GB if you want to play bigger, more demanding games, and for tasks like 3D modeling and animation. So if you’re deciding between 8GB RAM vs 12GB RAM tablet or laptop, make sure to keep your usage in mind before making the final choice.

CAS Latency 16 vs 18: Which RAM Is the Right Choice for Your Rig? 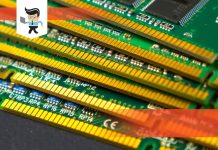 CL16 vs CL18: Which RAM Type Should You Choose for Gaming? 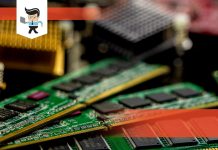