When it comes to hard drives that pack a punch, the KingDian s280 offers the most bang for your buck. It combines value with relatively fast and reliable speeds to ensure users are not left wanting. As far as gaming, the s280 delivered on high frame-rate content such as first-person shooters. The s280 also comes with a three-year warranty, which will help convince users that are not as confident in buying a less expensive hard drive.

However, among other users there are some inconsistency concerns. Some users have received a drive dead on arrival, or had it rendered unusable after a short period of usage. This brings up whether or not it can hold up to any abuse.

Similarly, since it boasts a TLC drive it is hard to know how durable or long-lasting this drive will end up being after years of frequent usage.

Read on to see more specifics on the KingDian s280!

Upon first glance, the KingDian s280 120gb SSD is clean, compact and sleek. It has a nice aesthetic that makes it look of a higher quality than the associated price tag, and it is made out of brushed metal components on the surface. It has a more minimalistic design and is very thin and lightweight at 1.6oz. The s280 also comes with a three-year warranty from the time of purchase. This is a bit of an ambitious offer considering the quality and price, and it will be interesting to see if KingDian will be consistent enough to offer that guarantee in the coming few years.

The KingDian s280 is fitted with a TLC (triple layer cell) drive. These types of drives are usually only slated for personal (rather than industrial) use because they are the cheapest to manufacture. They are also not well known for their long life and on average only last a few years.

Considering the three-year warranty offered, it is not unreasonable to think this drive would last at least that long since it is not cost effective to replace drives often. As far as read and write speed go, the specifications on the listing description indicate that read speed clocks in at 560mb/sec, and write speed clocks in at 381mb/sec. However, will these numbers hold up once it is tested independently?

The first essential component of this review had to be a speed test. Obviously if you are buying this drive, you are buying a solid-state drive and expect it to be efficient.

This means expecting to read and write data at the speeds specified on the listing description, and not dramatically less. Since this hard drive is one of the cheaper options out there, it is normal to have doubts about how well it will work and if it will be a waste of money.

Fortunately, these worries appear to be misplaced. The KingDian s280 clocked in at 511 mbps (megabytes per second) for reading data, and 437 mbps for writing data. Compared to the numbers quoted above these actual numbers are reasonable to work with.

The read speed was a bit slow in comparison, but the write speed blew the original numbers out of the water. This is encouraging for a cheaper hard drive and is promising when it comes to the next part of this review: gameplay.

In terms of gameplay, much of the information being referenced in a game is stored within different files on the hard drive. If the rest of the computer is not able to access this stored data quickly, the game will start to lag or stutter, and interrupt the overall gameplay experience.

Despite testing a first-person shooter with a high frame rate, the KingDian s280 did not show any signs of lag or stuttering, and it held up very well when played for a longer duration of time. This was somewhat unexpected for a low-end hard drive, but the s280 showed that low cost does not always have to equate with lower performance.

Although it is difficult to say having just bought this hard drive, one vital question is about how long this hard drive will last in the long term. It is a solid-state hard drive which gives it more potential than basic hard drives, but there are not a lot of guarantees that it won’t just bite the dust and leave data inaccessible. This remains to be seen, but for now it does not seem like a bad investment for a short-term option.

The other curious piece of info is the warranty. Although KingDian is a smaller scale version of KingDisk, there is no telling if this iteration of KingDisk will still be around in a few years. This means that if KingDian is still around and your drive no longer works, they will hopefully be responsive and get you a replacement as long as you contact them within that three-year window.

However, if for some reason this listing disappears or KingDian ceases to be a recognized subcompany of KingDisk, there are no guarantees that customer service could be contacted at that time. This, in turn, means no guarantees that a replacement would be issued in the event of a failure before three years’ time is up. Though it is hard to argue with a cheap solid-state drive that offers that sort of warranty in the first place since that is not exactly standard.

Upon perusing other people’s experiences with the KingDian s280, the experiences seem to be very hit or miss. Certain users claim to be using the hard drive far past the warranty window, while some others have received drives that were dead on arrival or became unusable quickly after some use. Ultimately it seems to depend on the individual unit itself and possibly the type of usage, which is not exactly encouraging.

Obviously the KingDian s280 is one of the more affordable options as far as solid-state hard drives go, so how does it compare to similar competitors?

With the stats the s280 boasts, it will never match the top tier of solid-state hard drives like Samsung, since the longevity of the materials that go into top tier drives are better quality and do not have the durability issues that lower quality options do. However, for speed and short-term durability this drive packs a punch compared to similar options.

Since lower tier components = lower price, you can’t do much better than the KingDian s280 for the price. If you’re looking for something cheap that will do the job and store more games or other multimedia, this hard drive is a good bet for short-term use and storage.

In terms of transfer speeds, the KingDian s280 clocked in at a higher write speed and a lower read speed than previously specified, which is a mixed bag. If you find yourself saving or changing files often, this probably doesn’t matter. However, in the long term the read speed is important for recalling data rapidly, so this is a decent drive assuming there is no amount of slowdown in reading files over time.

Since there was no lagging or glitching experienced with the KingDian s280, this seems to be a reliable option for anyone looking for a quick and cheap hard drive to add on storage for more games. This also applies to anyone looking to replace a similar hard drive that’s gone bad. Once again though longevity is the bigger question, and if you’re going to end up replacing your drive every few years, is it worth going through the frustration of dismantling your PC that often?

There also seems to be some amount of inconsistency with these drives since other reviews are very hit or miss on how long their drives have lasted. Quality-wise, these are not problems that you would have with a more expensive drive because of the higher quality of components that go into making the drive. This lack of quality can turn out to be a major flaw in the long run.

The KingDian s280 is a great low-cost option for anyone looking to replace their hard drive that has run its course, or for someone looking for more hard drive space to download games or movies to. The associated read and write speeds were slightly different than advertised, but they were still reasonable and not seriously slower than expected. The overall performance was not substantially damaged.

In terms of gaming, the KingDian s280 delivered as promised and did not derail the experience of a first-person shooter. There was no noticeable difference between the performance of this budget option and a higher quality solid-state hard drive.

As with many conveniently priced things in life, there is no guarantee that the KingDian s280 will last a long amount of time. The three-year warranty is a definite plus, assuming KingDian stays around and does not disappear off of relevant retailers.

The manufacturing process that goes into this sort of drive is the cheapest way to manufacture solid-state drives, hence why the cost is so low. However, that becomes a problem once it’s a few years out and there is vital information on your hard drive that has just died from overuse;

This may mean there is no way to access anything on it. With games or movies this may not be a massive deal, but if there is any sort of data that is more sensitive this might be an issue. There is also no proof of how long these read and write speeds will stay consistent, and this can be the demise of your drive. It’s even more of a gamble if you rely on this drive alone for gaming.

On a similar note, there seem to be a fair amount of inconsistencies with these drives that make them not as reliable as similar drives. You might get one that lasts for ten years, or you might receive one that doesn’t even work out of the box. Although as with anything cheap, that’s the risk associated with spending less money.

Verdict: Get this as a cheap hard drive if you’re looking for more multimedia storage on the fly. Just try not to put anything you’d miss on it, so that if the day comes that it stops working there won’t be any regrets. If you want something to store massive amounts of personal data on, do your research and get a reliable top tier solid-state drive. 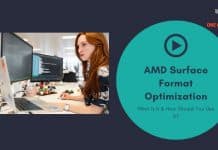 AMD Surface Format Optimization: What Is It & How Should You Use It?

What Is A PCI Encryption/Decryption Controller?

Radeon ReLive vs OBS: Which Streaming Software Is Better?

One Computer Guy - October 19, 2020
0
Choosing the best RAM for i7 7700k can be difficult for some people because they aren’t sure how to accurately predict what they will...

Keyboard for big hands, they do exist!