GPU artifacting tends to occur when you overclock your graphics card to unstable values. The high temperature of the GPU isn’t enough to cause a BSOD error or result in a crash, but it fails to display true visual data and you’ll most likely end up seeing flashes or pops on the screen that aren’t supposed to be there at all. 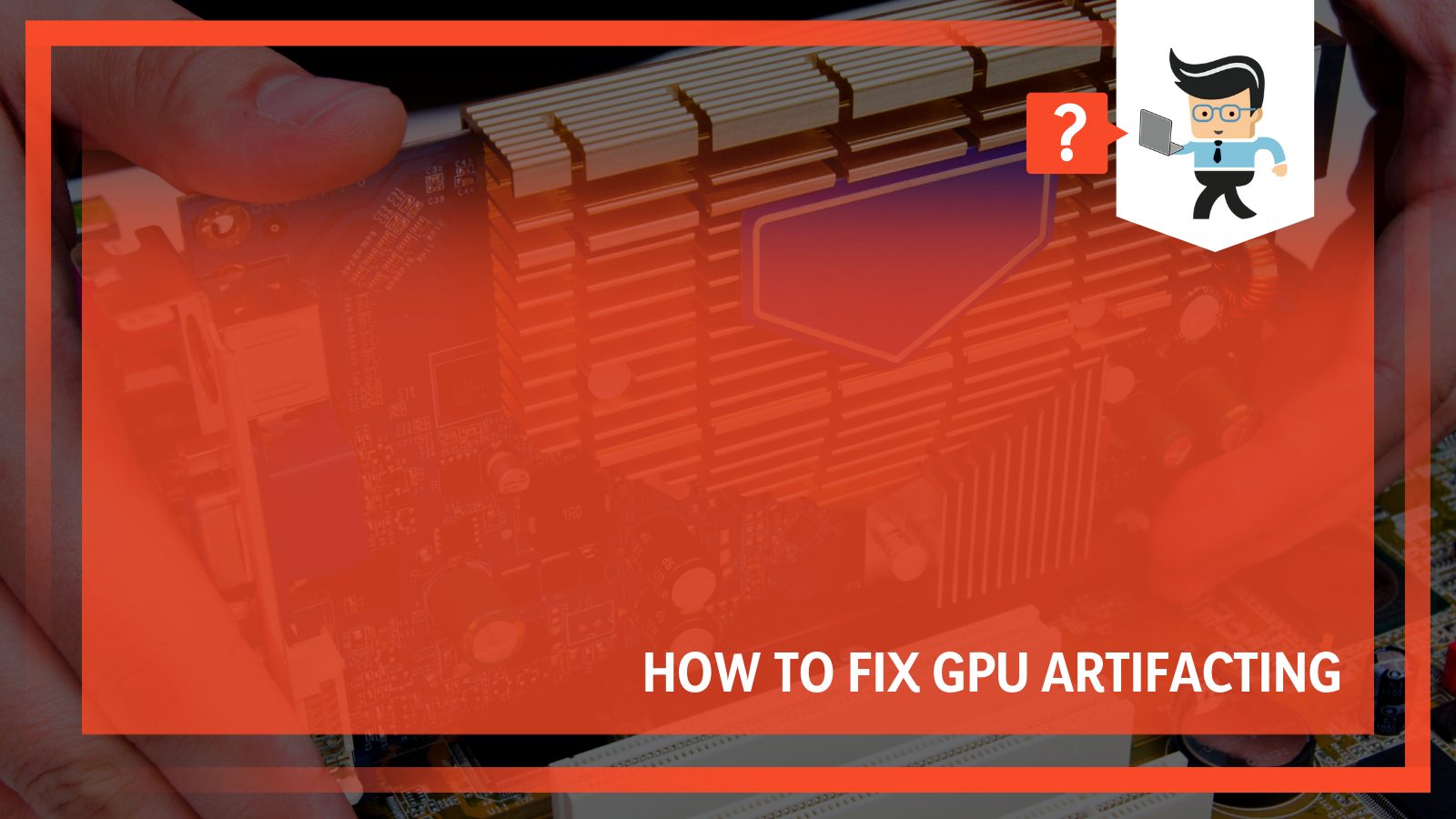 The good news is that there are numerous ways to solve it – you can update the drivers, underclock the GPU, change the thermal paste, etc. So whether you have a new GPU artifacting or you’re wondering how to solve a GPU artifacting on desktop, here’s everything you need to know.

How To Fix GPU Artifacting?

There are many ways to fix GPU artifacts, and some things you can try are updating the drivers, checking the GPU’s temperature, underclocking the GPU, replacing the VRAM, bringing the temperature down, and changing the thermal paste.

The very first thing you should try out is to update the drivers. There are a couple of ways you can do so. You can either do this manually via settings, or you can download GeForce Experience and make use of that to update the system every time you download a new game.

Keeping the drivers up-to-date makes sure that your system is ready to handle all the load that will be put on it when you launch the new, graphics-intensive game. So every time you download a new game, even if it is a VR game, just open up GeForce Experience and see if there are some new drivers available.

However, if all your drivers are up-to-date, and you still see artifacts on the screen, you’ll have to dig deeper and try the next solution.

Open up the CPU tower and ensure that all fans on the GPU are working as they should. Even if one fan fails to move as it should, you’ll experience many problems with overheating.

There’s an easy way to know if the fan not moving is causing the problem. You just need to run the game with the PC case open and check if the fans are moving correctly.

While doing so, run one of the fans directly at the GPU to see if the artifacts start disappearing. If they start to go away, then you were facing the problem because of an overheating GPU.

While it sounds counter-intuitive, underclocking the GPU might just solve your problem. Of course, you might not like the fact that you’ll have to get the system to run slower than it is fully capable of. But think about it – if you’ve gone a little overboard with the overclocking, you can solve the problem by going in the opposite direction.

Think of it this way: if you run your clock way too fast, it’ll produce a lot of heat. But you can make it cooler by making it run slower.

The VRAM or video card RAM is a kind of RAM that works with the GPU. If you start to see artifacts like screen stuttering or color shifts on the screen, it might be because of a malfunctioning VRAM.

And if that’s the case, there’s not much you can do except replace the graphics card. This is because you can’t take the GPU to a repair technician and ask to get the VRAM fixed. Individual chips present within the card aren’t fixed. Instead, you’re recommended to replace the card.

You can underclock the card to lessen the load on it, but if you still see artifacts and think the VRAM is the issue, then you should just replace the card.

5. Bring the Temperature Down

One of the most common reasons for GPU artifacts is rising temperatures. There are a number of reasons for the high temperatures. For instance, if there are numerous components fitted inside a small PC case, it could cause heat to build up, increasing the overall temperature of the case and ultimately affecting the GPU.

This is why cooling your card and bringing the temperature down can help fix the issue. You can do this by lowering the in-game settings so much so that there’s virtually no stress put on your GPU.

Alternatively, you can add more fans into the PC case so that there’s better airflow. Today, you can find a number of great aftermarket fans. When installing new fans, make sure that the PC case is spacious enough that it can promote airflow.

If none of these work, the last thing you can do is to do something a little more technical with your GPU, and that is to change the thermal paste. Doing so might just solve the problem.

The stock paste on your card tends to become solid with time, and re-applying a high-quality paste can help bring down the temperature.

However, you should keep in mind that this is a slightly technical process since you’ll have to uninstall the heatsink and the fans to apply the paste. And if you’ve never opened up a PC case, it’s better to get an expert do it for you.

Overclocking, a damaged card or problems with the VRAM are some reasons why your GPU might be artifacting. Have you ever thought to yourself – “why is my GPU artifacting?” Well, it turns out that these artifacts usually occur when a user pushes the settings too far, causing it to run hot. In addition to that, GPU damage and problems with the VRAM can also be responsible. 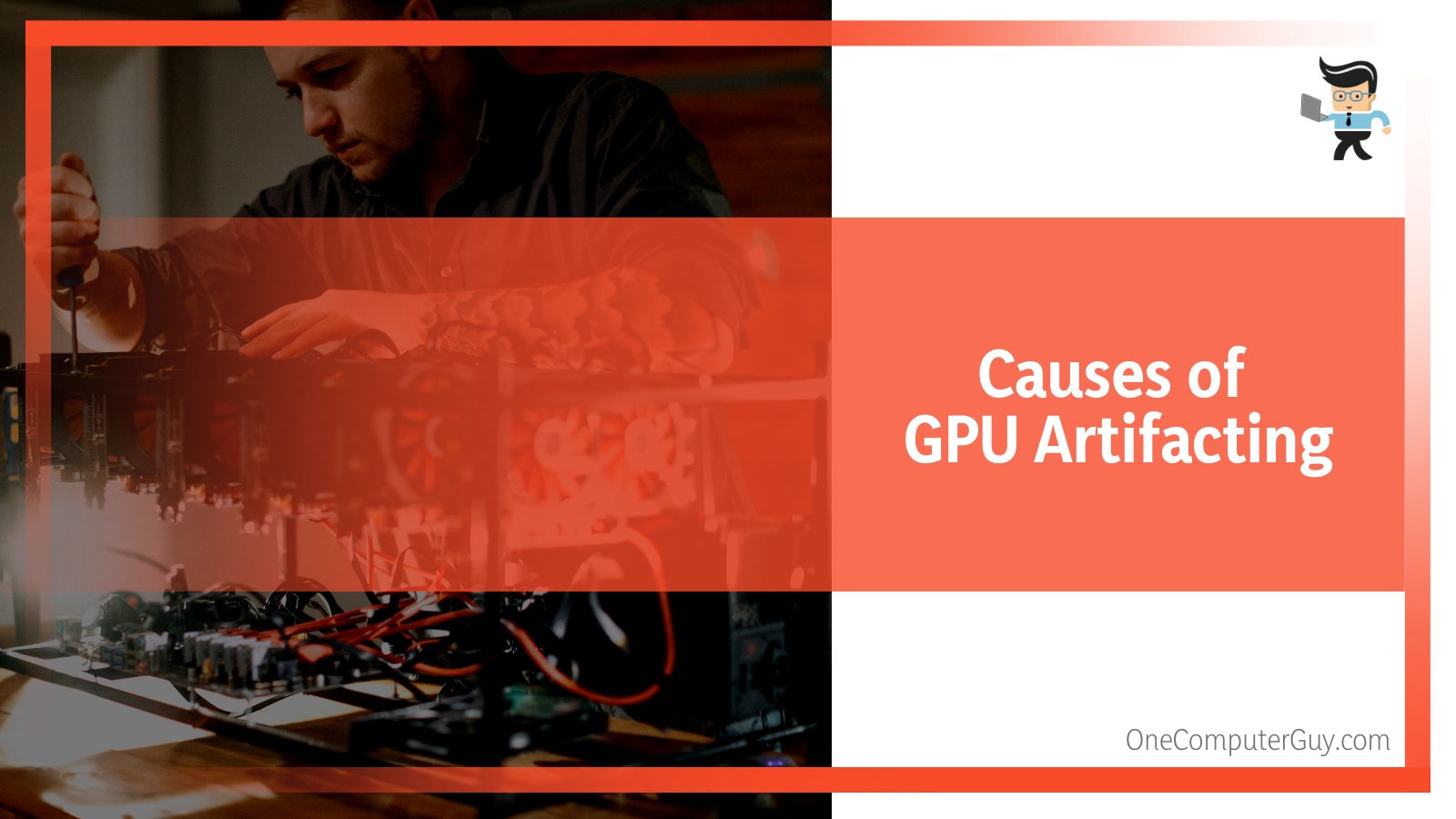 Overclocking is most often the culprit for these artifacts. This is because overclocking makes the GPU work extra and the only way it can manage the graphic settings you’ve applied to it is by compromising some parts of the screen so that the image on the screen stays stable.

Most gamers try to overclock at least once, but the key to it is to not get too greedy and believe that the GPU can handle even more than what you think.

A damaged card can also be the reason behind the artifacts. This can be either wear and tear after long gaming sessions playing your favorite titles on the max setting or physical damage.

And even though most GPUs now come with a cooling system, if yours doesn’t, you might notice your card getting damaged because of the excess heat within the case.

– Problems With the VRAM

Your computer’s VRAM tracks the different kinds of data, and if this part of the GPU is damaged, then it can cause the images to become distorted. The easiest way to recognize artifacts caused by the video card RAM is to look for color shifts.

Once you’re sure that the VRAM is responsible for the artifacting, you can lessen the load on the GPU by deleting some of the data used by the VRAM. In other words, consider deleting games you no longer play, saved games, etc. If you don’t clean up the VRAM, you can permanently damage it, especially once you overclock it.

What Is GPU Artifacting?

Graphics card artifacting is glitches or visual deformations that appear when there are problems or errors in the computations that a graphics card’s processor handles. It can manifest itself in different ways and in various forms and shapes. For instance, you might start to see weird lines at a distance on your screen like thick gray lines in the sky, strange features or features that look out of place, screen flashes, etc. 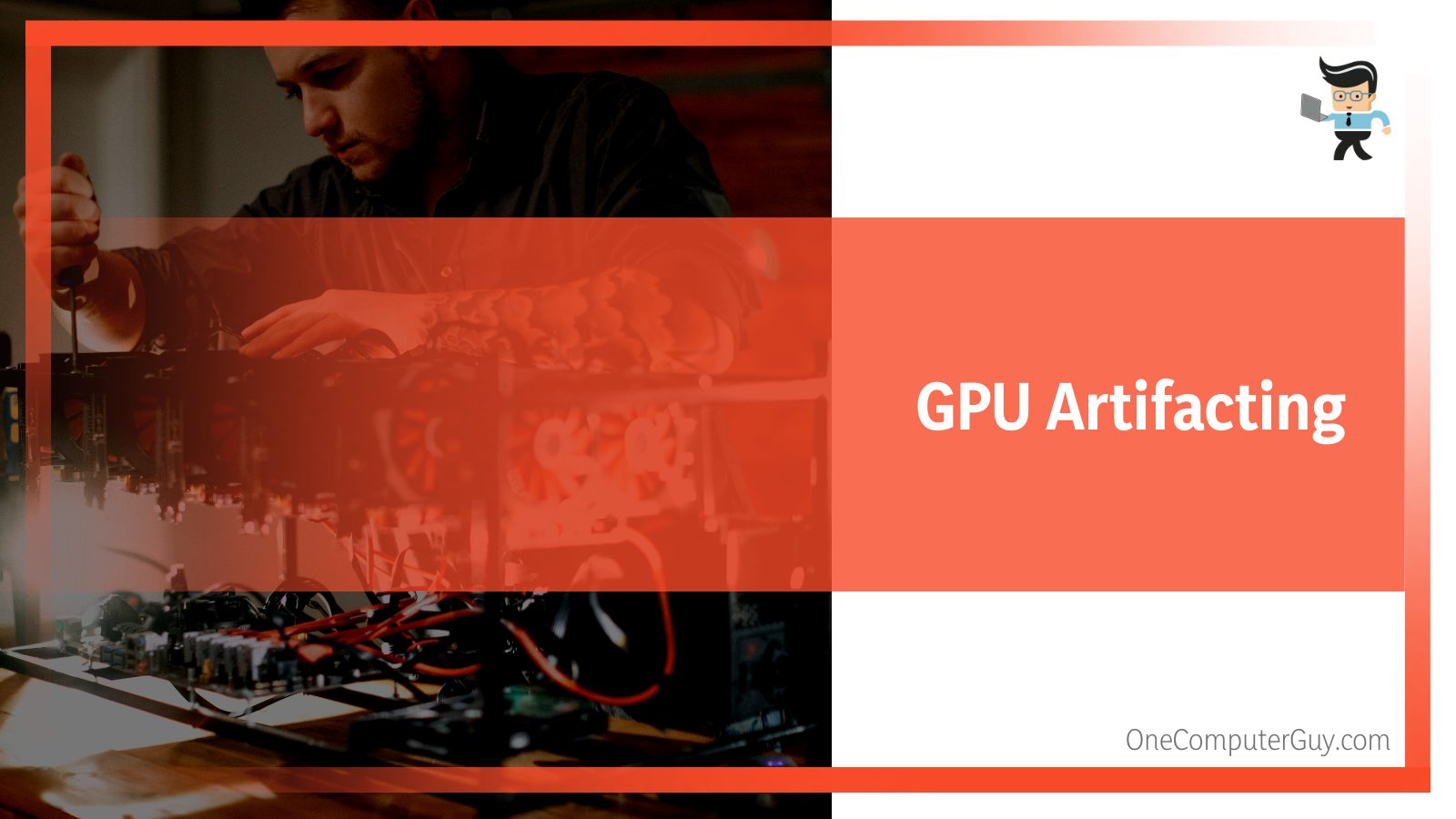 In some cases, artifacts are hardly noticeable as you go about your game, and they barely make a difference, but in other cases, they can really be a nuisance and can make it almost impossible to play the game, especially if you overclock your GPU.

Perhaps one of the most common artifacts is large triangles within the game scenery. At first glance, you might think of them as trees, but they’ll soon start to rapidly multiply and appear where they simply don’t belong.

Now that you have a better understanding of graphics card artifacts, it will be easier for you to solve any problems that come along with it.

The artifacts you see on the screen aren’t necessarily permanent, but if you start to see any kind of artifacting on the screen, you’re pushing the GPU too much and it might sustain permanent damage. Examples of these artifacts are strange lines on the sky or certain items appearing where they shouldn’t be. As a result, the artifacts might become permanent.

– Can Dust Cause GPU Artifacts?

Yes; while it might sound strange, dust can certainly be the underlying cause. This is because dust on the heatsink or the GPU fan tends to absorb heat, resulting in a higher temperature. This, in turn, causes the GPU to overheat, leading to artifacts. So if you’re seeing artifacts, you should try cleaning the dust using compressed air.

To prevent this problem in the first place, the easiest way to avoid artifacts is by running your GPU either at the default, manufacturer-recommended speed or at a lower clock speed. In particular, if you have a basic, entry-level card with just one fan, it’s better if you don’t overclock it, otherwise it will only result in artifacts.

Clearing the artifacts on the screen is easy. Just open up Settings and go to Display. Here, change the resolution of the screen, and you’ll see the artifacts go away. When your system asks you if you want to save or keep the new resolution, click on cancel.

GPU artifacts, especially when playing your favorite game, can be very annoying, and while they don’t directly have any effect on the gameplay, random lines and screen flashes can often make it difficult to continue playing. Here’s a quick summary of all the things we’ve discussed about artifacts in this article:

So whether it’s your NZXT GPU artifacting or a GPU from some other brand, hopefully, one of these fixes will get rid of the problem. However, if none of these work, there’s a high chance that your GPU is damaged or has succumbed to wear and tear over the years, so in that case, it’s best to invest in a new GPU altogether.